10 reasons you MUST visit Inis Mor

10 reasons you MUST visit Inis Mor

The Aran Islands are three rocky islands located off of Ireland’s west coast, near Galway and Doolin. Inis Mor (pronounced ‘Inish-more’) is home to the prehistoric fort of Dún Aonghasa. It is also the most visited and largely inhabited of the islands. Proximity and ease make this the perfect easy day trip from Galway! Everyone must visit Inis Mor once in their lives, even if only for a day – it is truly a place unique in all the world.

Reasons You Must Visit Inis Mor 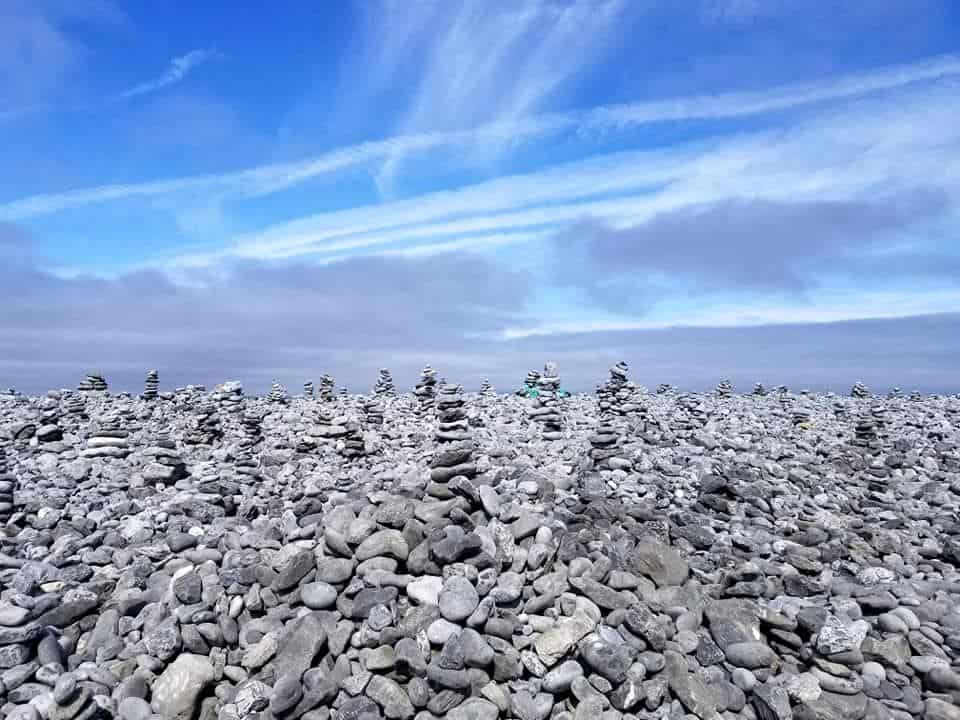 When you’re at the ocean you are typically greeted with smells of low tide, fishing ports, salt, sweat, and fish. For me, someone who grows up around this, the smell is home.  For others… let’s just say it’s acquired, if ever appreciated.

One thing that surprised me so much about the Aran Islands and Inis Mor, in particular, was that nothing smelled. The air in Inis Mor had the faintest hint of salt, but no fish, no sweat, nothing overly obtrusive. If the wind blew a certain way the intensity of the salt smell would change, but it was never overpowering.

In addition to the super-fresh air, the island was, in general, immaculately kept. It’s evident that the locals care about their little slice of heaven and there were no signs of trash or debris, even though Inis Mor is frequently visited by tourists.

Take in the Breathtaking Views 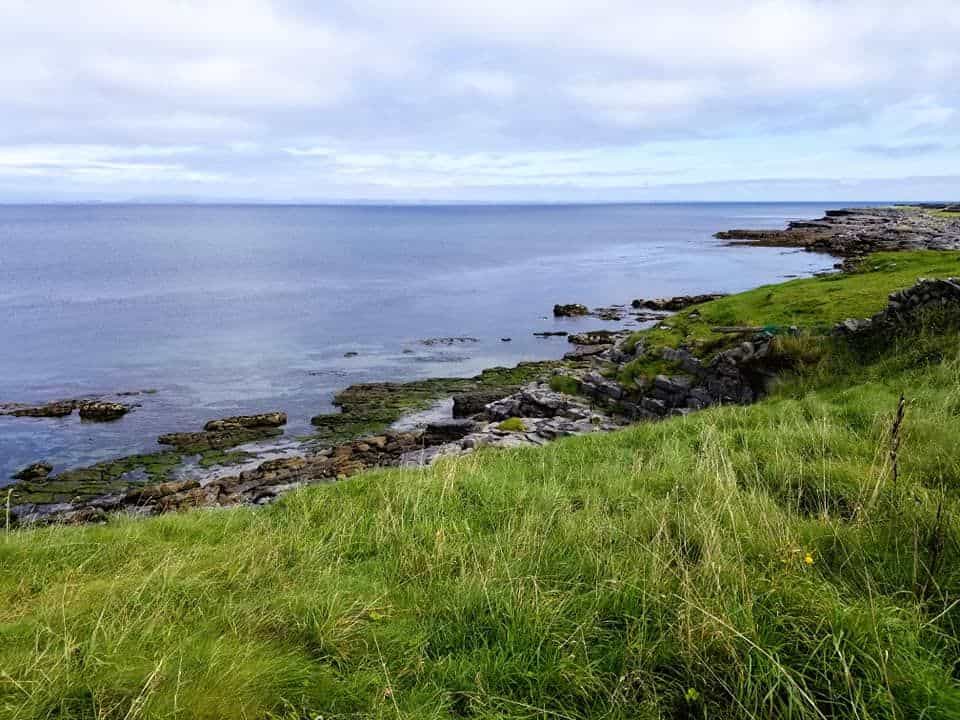 The awe-inspiring landscape, the soft green patches contrasting the jagged grey rocks with the deep, endless blue of the Atlantic and the foaming white crests of its waves. Kilmarvey Beach, a small white-sand beach with clear water as far out as you could see. Dun Aonghasa, a prehistoric sight to behold.   The views that are scattered over the island are, on their own, worth a trip. 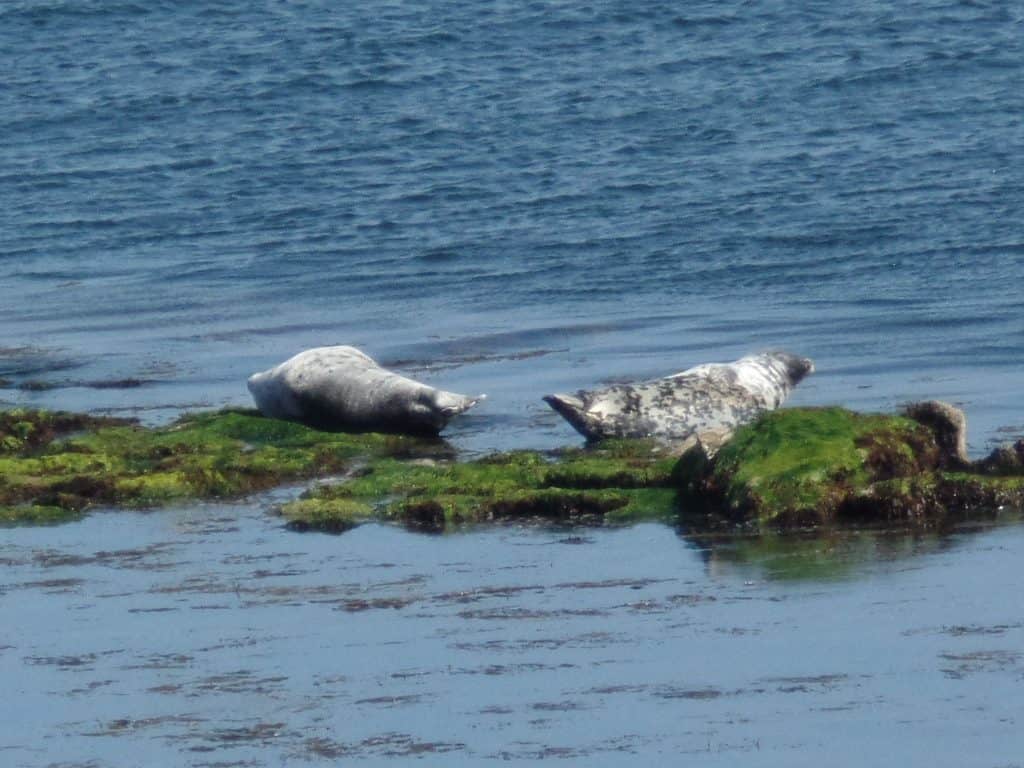 Who can say no to seals?  These guys were quite a ways in from our walk from Kilronan Village. We probably reached this spot 1/3 of the way to Dun Aonghasa – approximately a 45-minute walk or 10-minute bike ride from Kilronan Harbor.

With ideal weather conditions and the right tide, you’ll be able to see a handful of seals sunbathing on the rocks. It’s a very charming sight to behold. Right next to the seal colony is a tiny lake, home to wild swans, ducks, and other rare bird species.

Whether or not you can see them depends on the tides, so if the seals are the purpose of your journey, check the tide schedules beforehand! The seals are usually hunting for fish during high tide, and love to sunbathe when the tide is low.

Feel the Soft Sand Between Your Toes 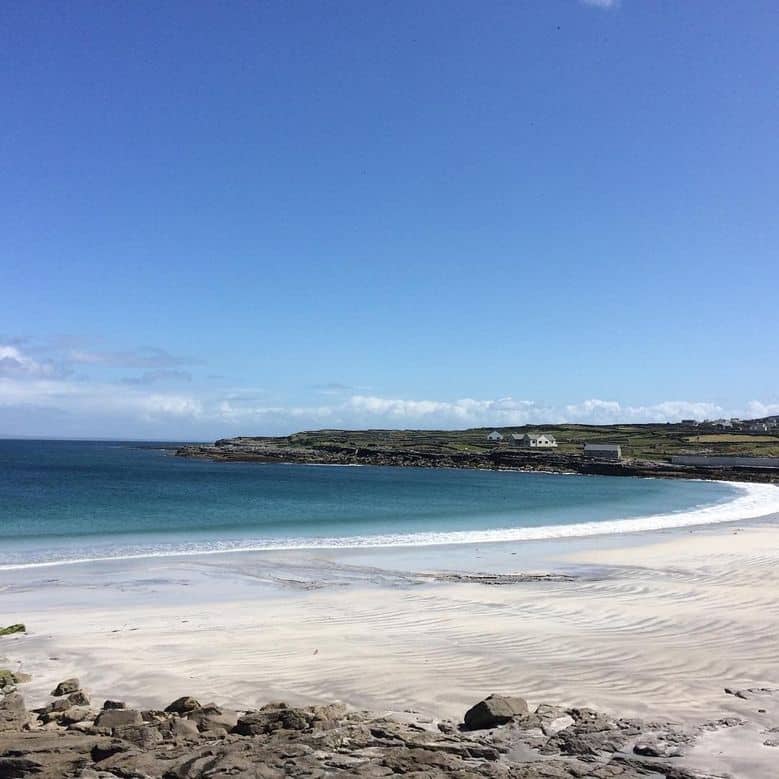 I know. Sand? Yeah. Sand. I can still feel the soft impact of my feet in the silvery-white powder. The wonderful effects of all that limestone! It might seem silly that sand gets one of the top reasons, but… trust me on this one. Or don’t!  Go and see for yourself!

Kilmurvey Beach is a welcomed sandy reprieve from the rocky coastline of Inis Mor. There are sometimes groups playing soccer or makeshift, net-less volleyball, but it’s a quiet, peaceful beach. It holds blue flag status and is safe for swimming. The contrast of the white sand and deep blue water is strikingly beautiful on sunny days.

Get to Know the Friendly Locals 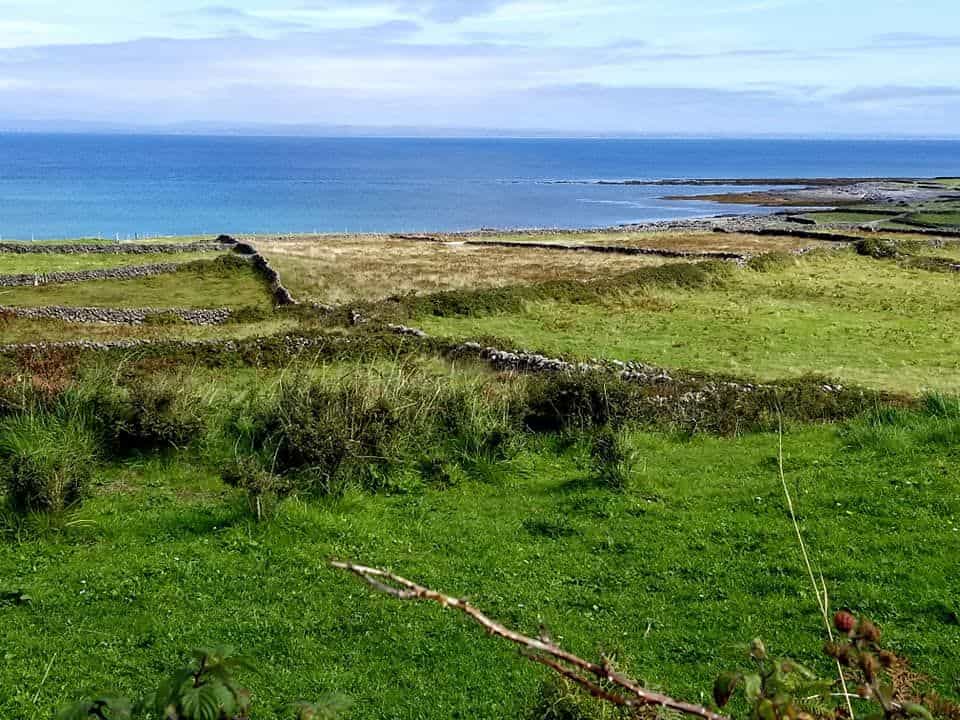 Despite the distance, the elevation, and the time it took, I am still happy with my decision to walk in lieu of renting a bicycle. Had I been on a bike, I’d be stopping every few feet to snap a picture, pet an animal, or hurriedly get out of the way of a careening tour bus. Still… the exhaustion coupled with the heat was pretty brutal.

Thankfully, a local with an empty tour bus stopped and offered us a ride back to town. Eager and grateful, we climbed into the backseat. I listened with a smile to the two locals speak back and forth with each other in Gaelic.

Once we arrived back into Kilronan Village, we offered to buy our rescuer a beer at Tigh Joe Mac. This was a sweet spot that seemed to host a lot of locals, where we could sit our asses down and have a beer. I’d never felt like I’d earned something so much in my life.

A few more people crowded into the tiny bar, and in a few rounds, it was as if we were all old buddies. The friendliness and the hospitality of the Irish never ceased to amaze me while I was there. They are truly a special group.

Eventually, we realized we were about to miss the ferry, and had to make a break for it. So we said our goodbyes and left the bar with great smiles and aching cheeks from laughing so much. 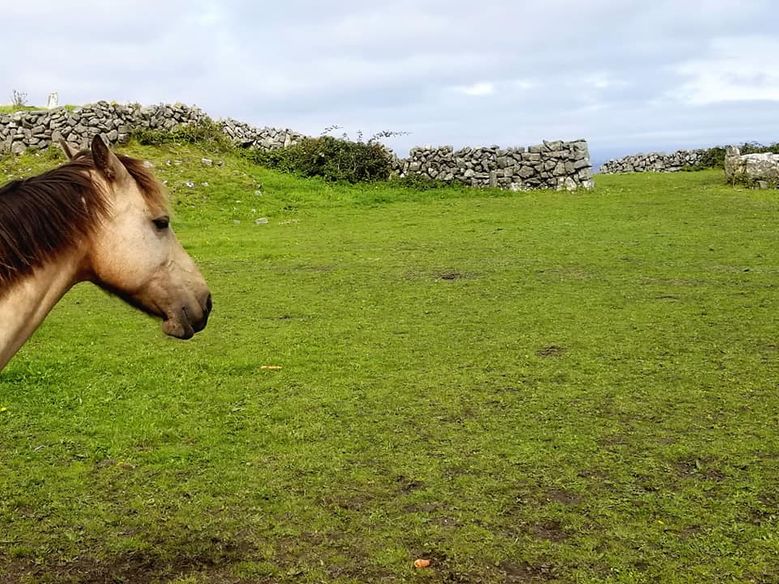 At the peak of every hill, and around every bend in the long and winding road, there was another animal for me to stop and say ‘hi’ to. Mostly horses and cows along the north shore, some marked with spray paint to denote belonging to this farmer or that one. 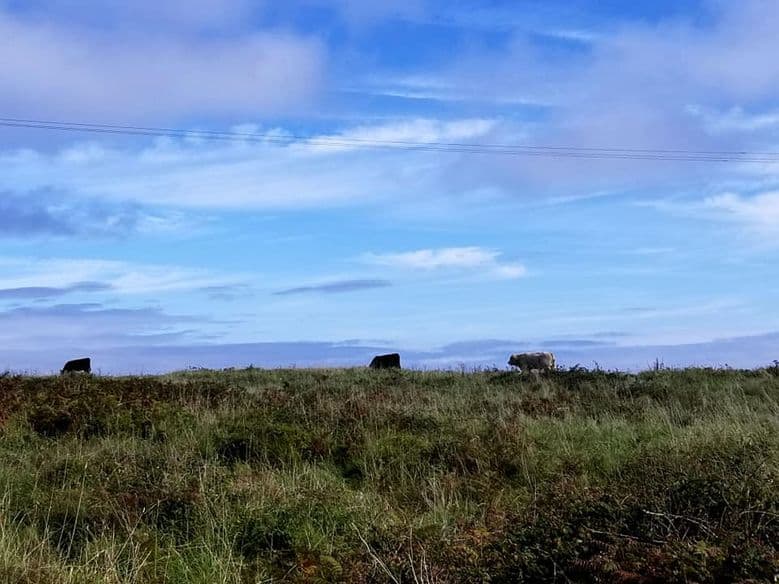 It was bittersweet seeing these guys so free, in such an (essentially) untouched landscape, enjoying stress-free grazing, and thinking back to the conditions other animals have to endure in different parts of the world. 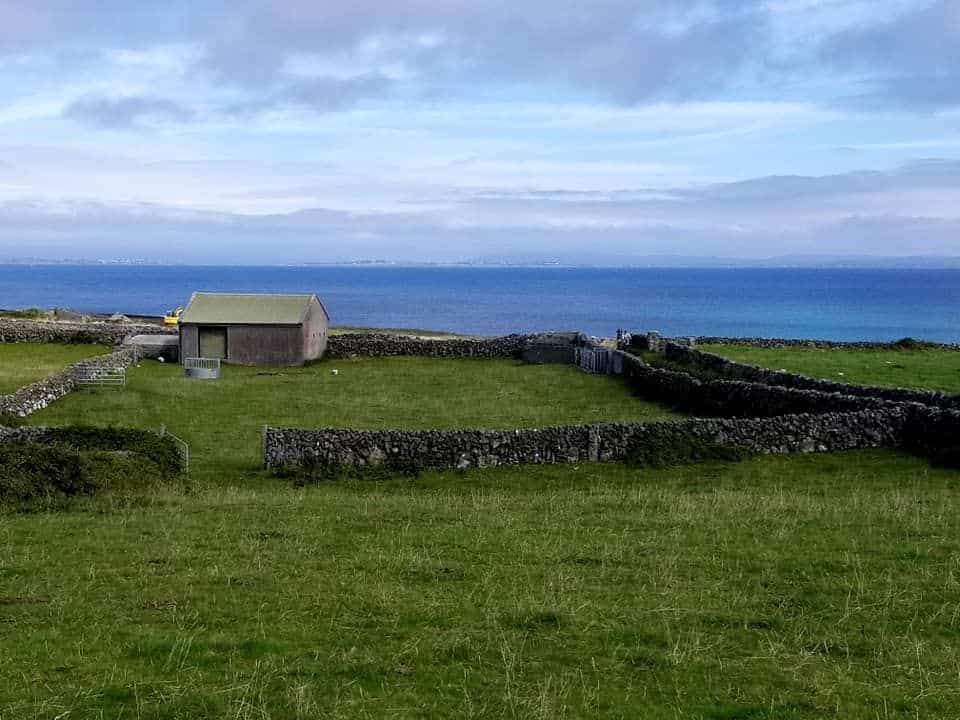 Besides the obvious beauty of the virtually uninhabited landscape of the island itself, there was another component to its appeal. Covering essentially the entire island, like an invasive vine, lies a vast network of stone walls. They can be found everywhere, and form pastures of varying sizes.

The original island settlers used a system of farming known as ‘rundale.’ This was a way in which land was divided by stone walls into strips that go from the road to the ocean, and ensured that each tenant had an equal share of good and poor-quality land.

Inis Mor has origins of barrenness and desolation, but the settlers transformed it into a place full of life and new growth with their stone walls. That’s part of their magic. The islanders created a thin topsoil by layering seaweed and peat in between the confines of the walls. Eventually, the island of Inis Mor became the emerald green wonderland it is today. 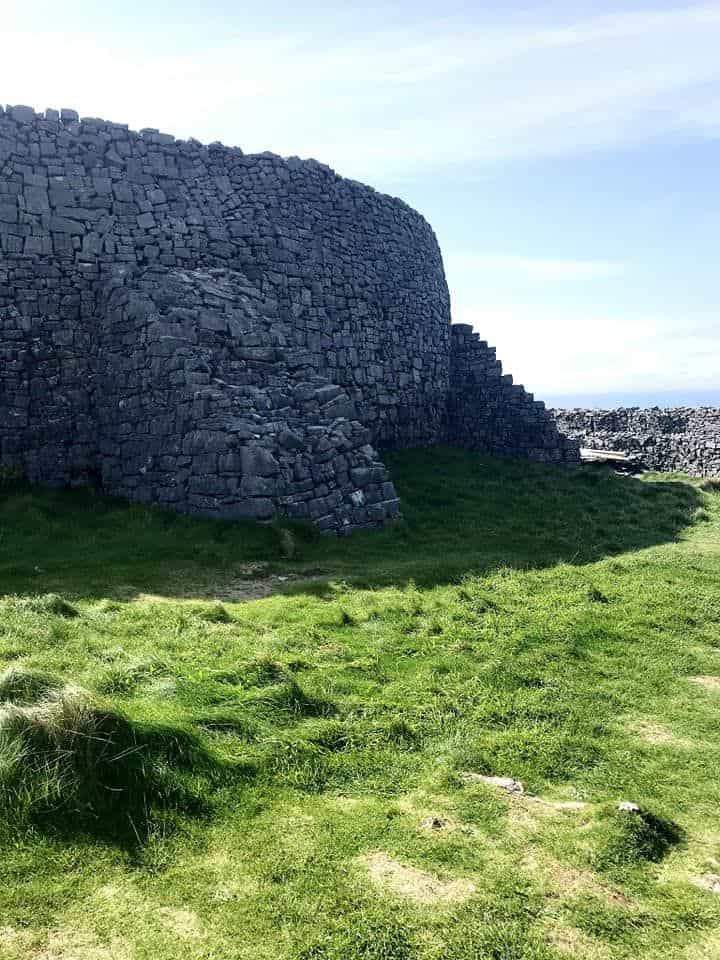 This ancient fort is the main attraction on Inis Mor. Dun Aonghasa (pronounced done-angus) is a semi-circular stone fort that dates back to c. 700BC –  excavations indicated that people had been living on the hilltop from c. 1500 BC and the first walls and houses had been built c. 1100 BC.

Many people choose to rent a bicycle from Kilronan Village to make the journey to Dun Aonghasa. Some masochists, such as myself, like to walk the entire way. However you choose to get to the fort, there comes a point where you’ve got to ditch the bike and proceed on foot.

The terrain is too difficult to navigate on wheels, it’s bad enough with two feet to balance on. Definitely wear appropriate shoes. These are the hiking boots I wore, and I swear by them. To be honest, it’s surprising there aren’t more reports of people shattering their ankles out there. 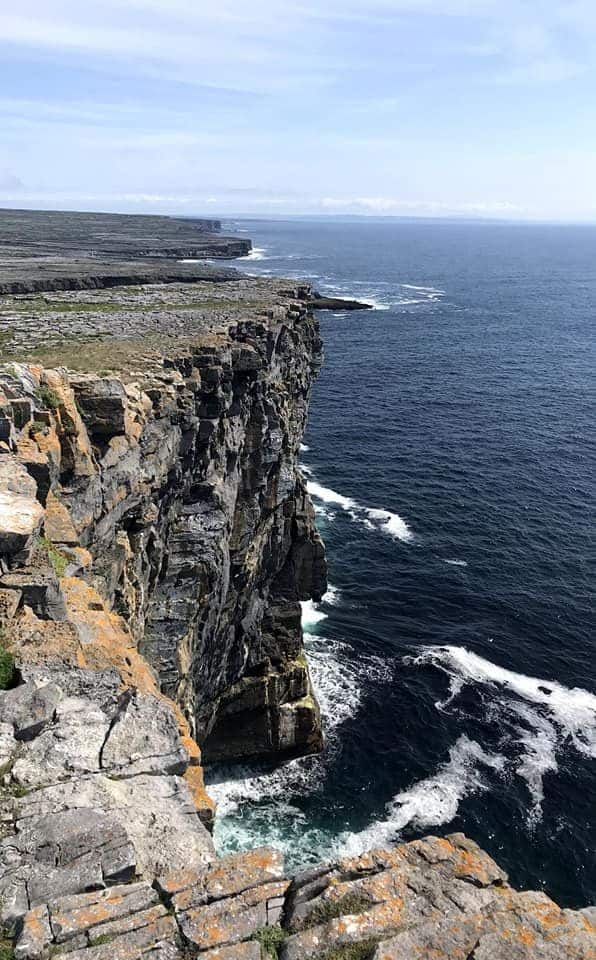 Overlooking the Atlantic with daunting and dramatic views that span the south side of the Island, Dun Aonghasa is found on a 300ft cliff. Objects that had been obtained from site excavations are now kept in the National Museum Dublin. 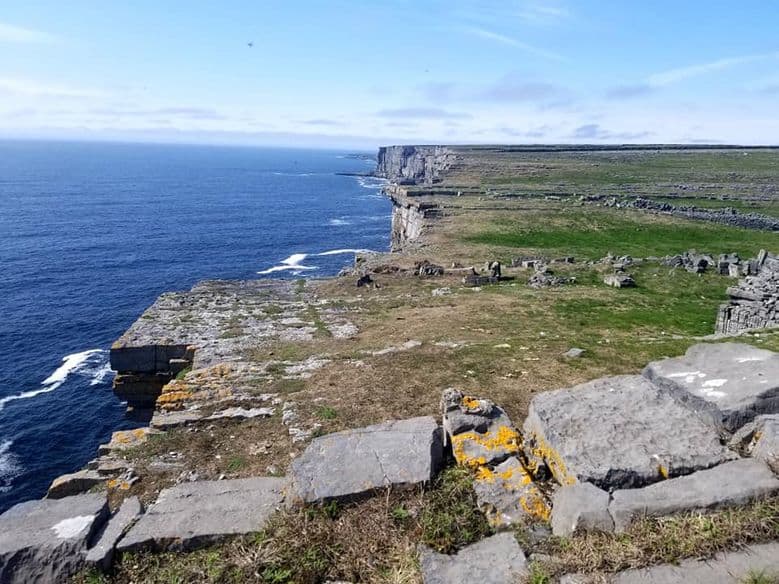 The views are breathtaking, not only for the aesthetics, but holy moly, you’re so high up, and there are no barriers of any kind. It’s pretty amazing to imagine the ancient tribes inhabiting this place, what life was like, who their enemies were, what happened to them.

Some experiences and places are simply beyond words. They evoke feelings and emotions that can surprise and astonish.

In a limestone landscape shaped by the wind, the rock surfaces alternated between smooth and dappled with deep depressions, giving me the sense of walking on the moon. The light wind was just enough to combat the beating sun and cool me a little from the contact of the breeze with the light dampness of the sweat I’d acquired on my face and chest. All of these factors contributed to the overall experience of wandering around in the quiet of the island.

For me personally, that is the best part of travel. I’d enjoy exploring the city streets, taking in the smells and the grit of the reality of wherever I may be. 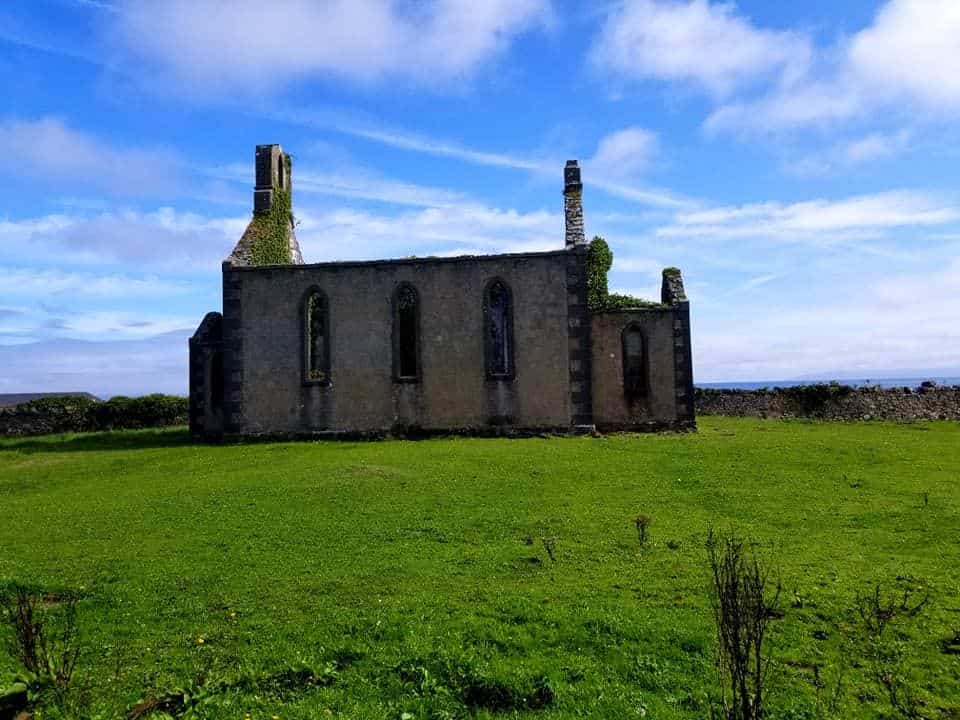 My favorite, and most lasting, part of visiting Inis Mor was the fact that this enchanting place, so untouched, so pure, was the perfect backdrop for imagining how the island’s settlers came.  How they lived and where, the building of the stone walls, transforming rocky ground with lush, green grass.  The former uses of the vacant, abandoned, or destroyed buildings.

On Inis Mor, you can look at an empty field with a crumbling stone wall, and be able to see the man building it.  You can see the empty expanse of the dirt road in front of you and imagine a horse and cart leading the way for you.

How to Get to the Aran Islands from Galway 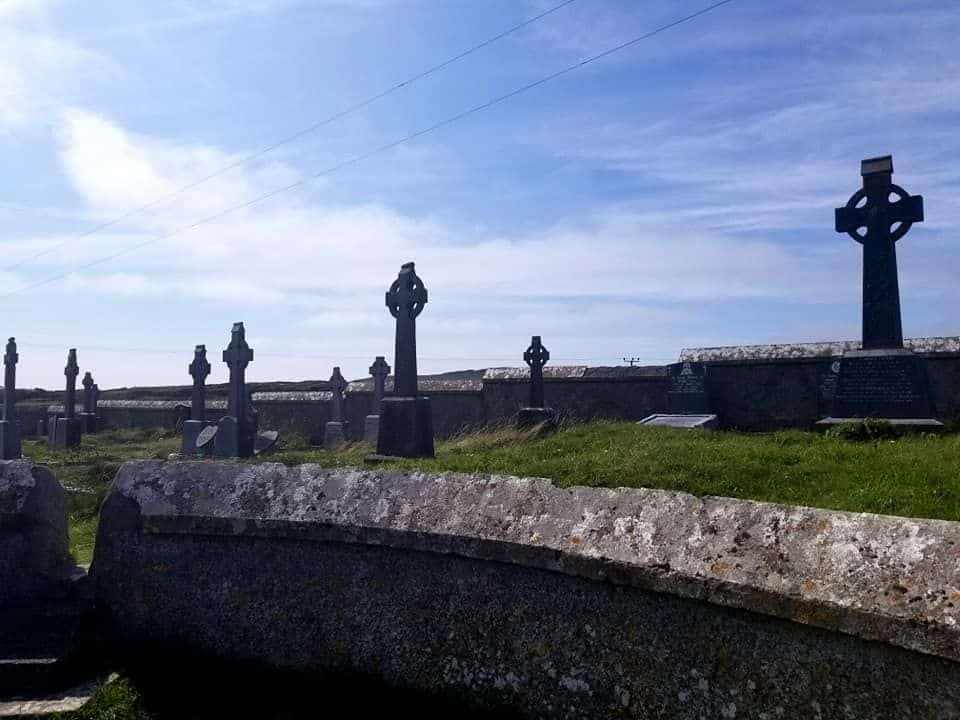 Getting to Inis Mor from Galway may seem complicated, but it’s quite simple in reality. From Galway, you need to take an express bus to the port of Rossaveal, which is located in the heart of Connemara and the center of the Wild Atlantic Way. The bus leaves from the center of Galway City, just outside the Victoria Hotel, a short walk from Eyre Square. The bus ride takes twenty minutes.

The ferry ride from Rossaveal to Inis Mor takes approximately 40 minutes. No vehicles are permitted on the ferry, but you won’t need one on Inis Mor anyhow. Ferry services run year-round, though routes are less frequent in the winter months. A round-trip ticket is €30 for adults or €15 for children. Discounts are available for students and seniors.

Additional crossings may be available from June-August.

How to Get Around Inishmore 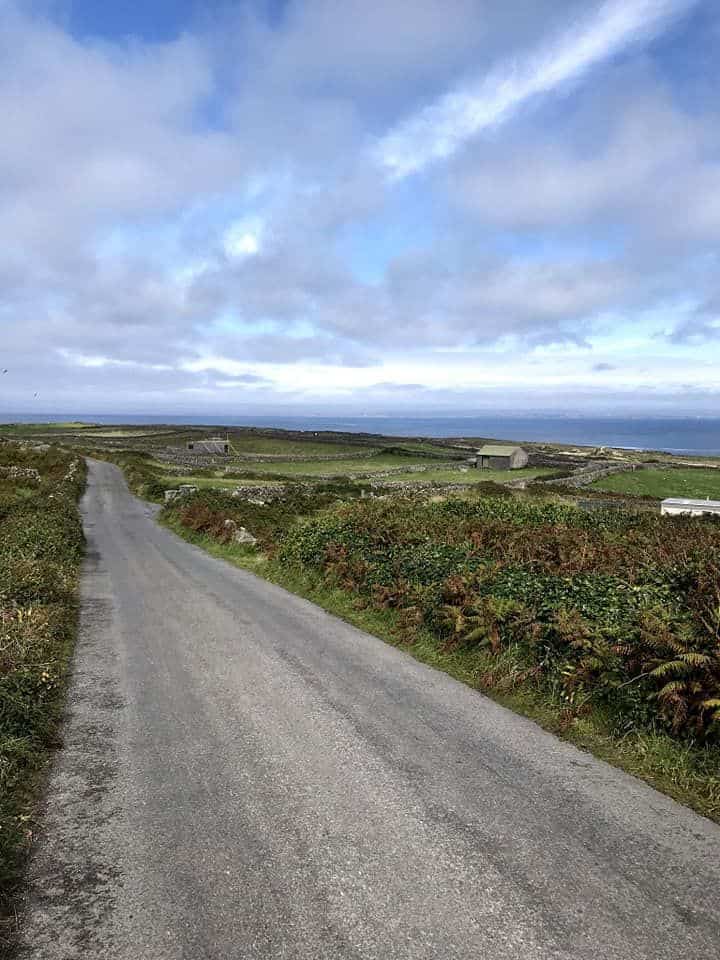 Once you get off the ferry at Kilronan Harbor, there are many bike rental facilities within eyesight. Prices are roughly the same between them. Many people who visit Inis Mor opt to rent a bicycle to explore the island.

I chose to stay on foot but I’ll admit, we would have covered a lot more ground had we opted for bikes.

There’s one main coastal road on the north shore that leads to Dun Aonghasa, which, surprisingly, wasn’t too crowded with tourists on bicycles or tour buses. For a while, it felt as though we were the only people on the entire island.

14 Things To Do In Dublin, Ireland 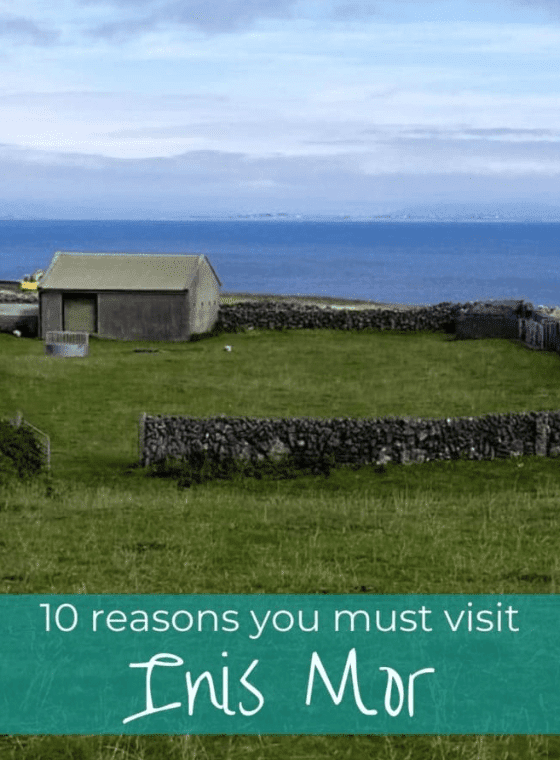 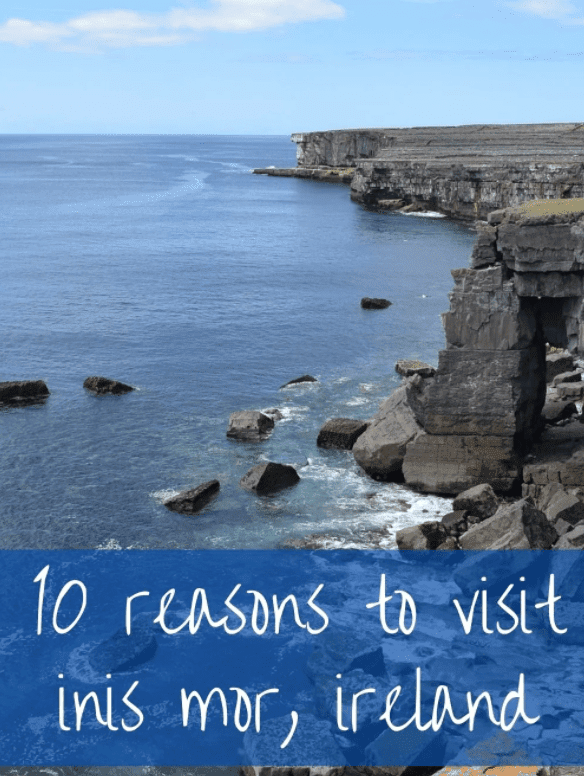