It takes a lot to be entered into a World Heritage listing, this includes outstanding value, international significance, and common importance to generations of humanity. Therefore, you know it’s going to be amazing to visit any World Heritage Site. Australia holds diverse landscapes from the city to outback, marine life, and architectural marvels. It’s no wonder you can see so many in Australia, so let’s explore our options. 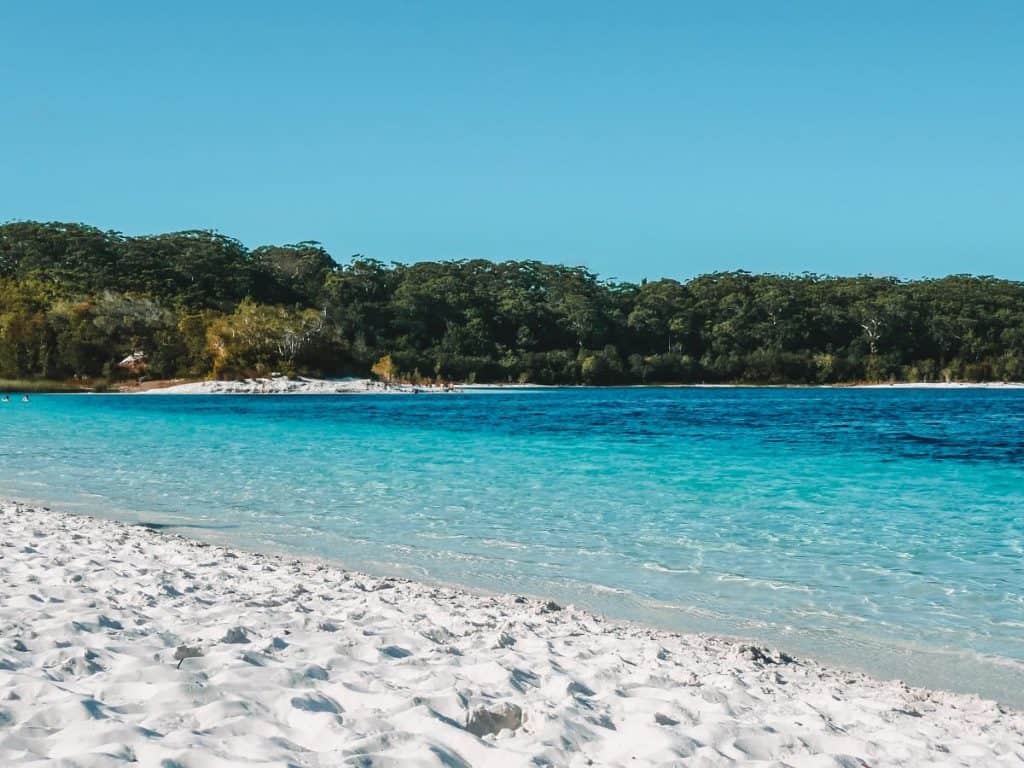 There are many different sand Islands in the world, with four of the biggest located off the coast of Queensland in Australia. Out of all of them, Fraser Island is the largest, with a size of over 1600 square kilometres, and was listed as UNESCO World Heritage status in 1992. What makes Fraser Island so special is containing several unique and natural sites, along with the only rainforest in the world to grow completely in sand.

Accessing Fraser Island can be done in a couple of ways, from single day or overnight tours, to driving over your own four-wheel-drive vehicle. It’s easy to book organised day tours from Rainbow Beach and Hervey Bay, along with overnight tours from Brisbane. Otherwise, barge transfers will carry your own vehicle over from Inskip Point near Rainbow Beach or River Heads just south of Hervey Bay. 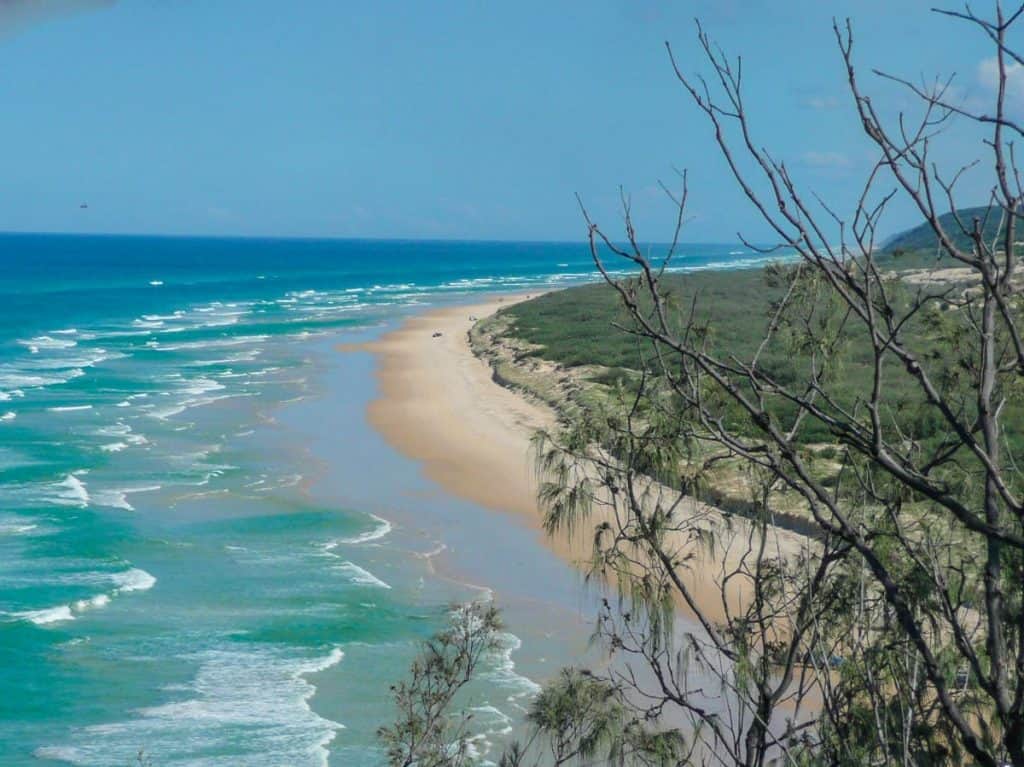 Beachside camping is extremely popular, and the Island receives over 300 thousand tourists each year. Lots of swimming spots like Eli Creek, Lake Wabby, and the beachside Champagne rock pools. Lake McKenzie has one of the most beautiful beaches in Australia. With its white silica sand and crystal blue waters, so one place you don’t want to miss. Alternatively, you can admire the Pinnacles rock formation, learn the history of the SS Maheno Shipwreck, or trek through the evergreen trees in the rainforest. 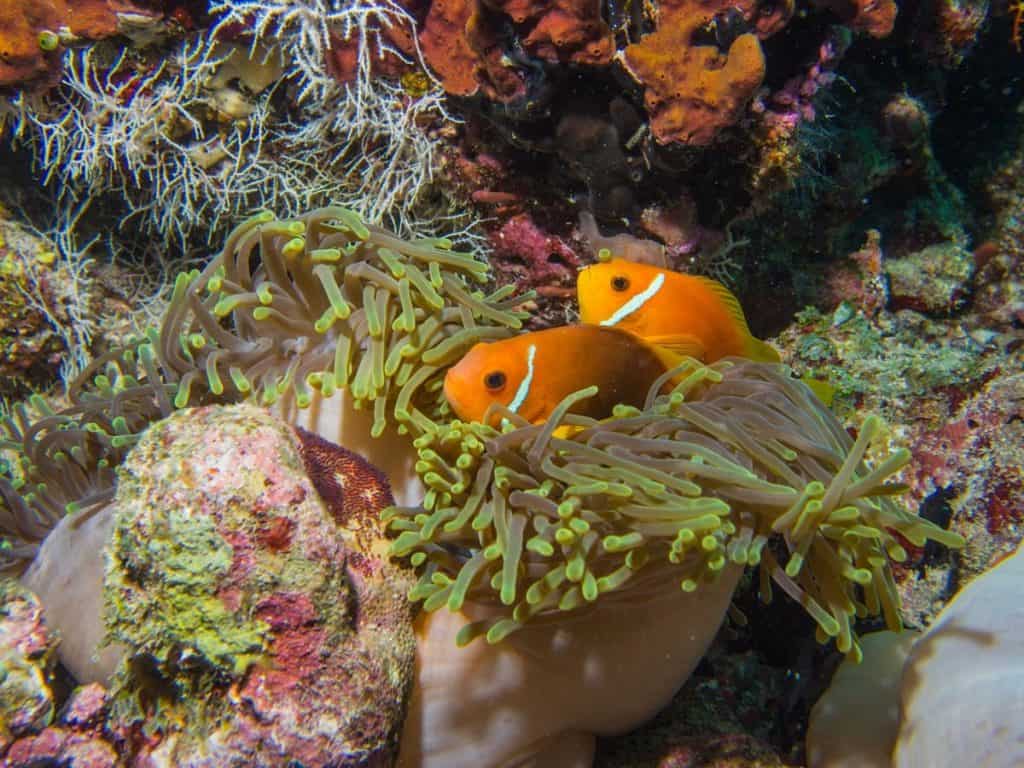 The Great Barrier Reef was listed as a World Heritage Site in Australia in 1981 and considered one of the seven natural wonders of the world. Its stretches over 2300 kilometres along the Queensland coast from Bundaberg to Port Douglas and is the largest and only reef system that can be viewed from space. It contains 3000 individual reefs systems, 300 coral cays, 150 mangroves, and 600 continental Islands.

Exploring the Great Barrier Reef is easily done with tours from many of the coastal towns like Airlie Beach, Cairns, Agnes Water, Bundaberg, and Port Douglas. Alternatively, islands with resort facilities are accommodating in the Whitsunday network and incredibly popular from Airlie Beach.

You can enjoy any part of the Great Barrier Reef by snorkelling any of the reef systems, diving into the many sites, or appreciating some of the best beaches you’ll see in Queensland. Expect to see migrating Minke or Humpback whales, lots of Turtles, Manta Rays, Reef Sharks, or thousands of fish varieties. 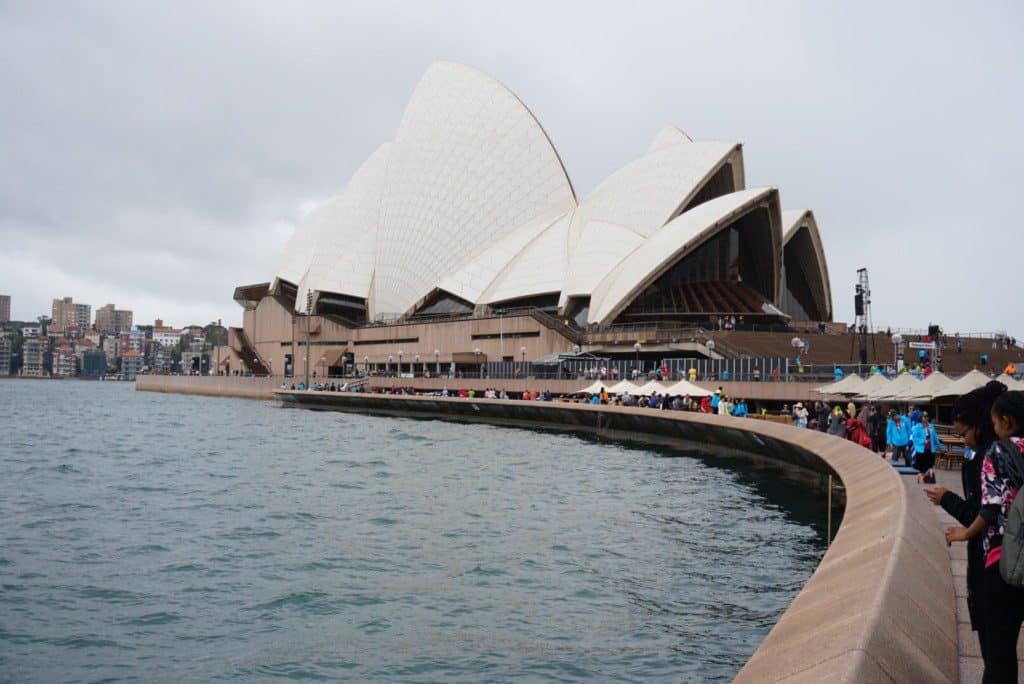 The Sydney Opera House is one of the cultural and architectural World Heritage Sites in Australia. It’s located in Sydney and has a population of close to 5.3 million people. When you visit Sydney, there is no doubt you’ll be around the Sydney Harbour and therefore, admiring the Sydney Opera House and the Harbour bridge.

The Opera House happens to be one of the most photographed buildings in the world. The roof has been designed with recognisable white sail-shaped shells and holds events, stage shows, and of course, Opera inside the Amphitheatre. There were 10 thousand men used for its construction, which cost 102 million dollars and was listed as World Heritage status in 2007.

Sydney receives over 4 million tourists each year at this seaside city and almost all of them will glance up close or from a distance at the Sydney Opera House. Catch the best view by joining the Sydney Harbour Bridge Climb experience and look down at this marvel below. 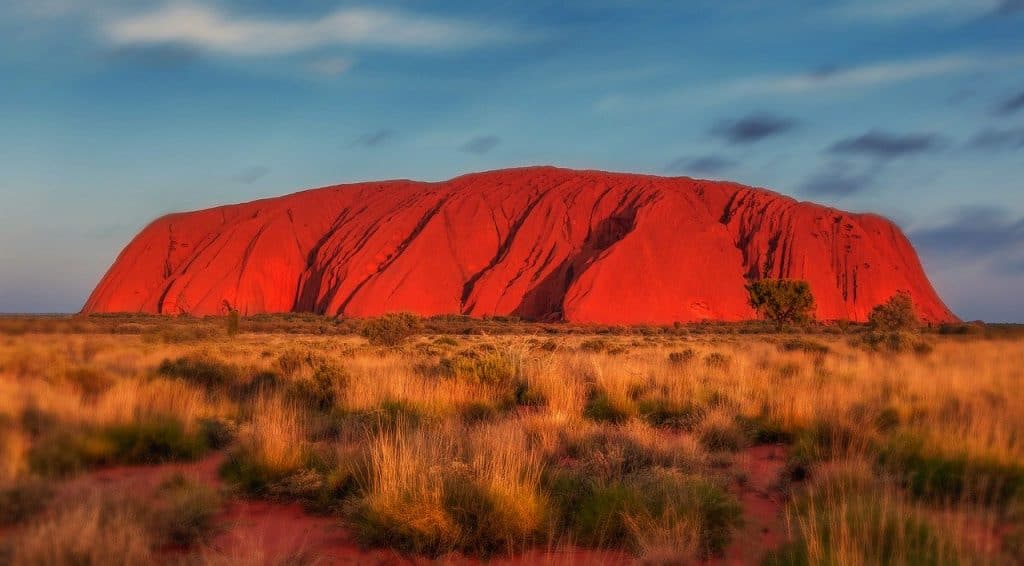 Uluru or otherwise known as Ayers Rock is one of the most famous landmarks in Australia. It’s made out of red sandstone rock, stands at 348 metres (1142 Feet) above the ground, and listed as a World Heritage site in 1987 for its natural values and in 1994 for its cultural significance.

The base of the rock is about 10 kilometres around and will take 3 to 4 hours to walk around. There are lots of views points for small waterholes and getting really close to the rock. Apart from that, you have a road that can drive all around it, at a distance or allocated stopping points for early morning and afternoon viewings.

The Uluru-Kata Tjuta National Park is best explored over 2 to 3 days, along with the Kata Tjuta (another rock formation) and a 30,000 solar light bulb display. There are several different hiking opportunities, helicopters flights, and all the facilities and accommodations in Yulara, a purpose-built tourist town nearby. 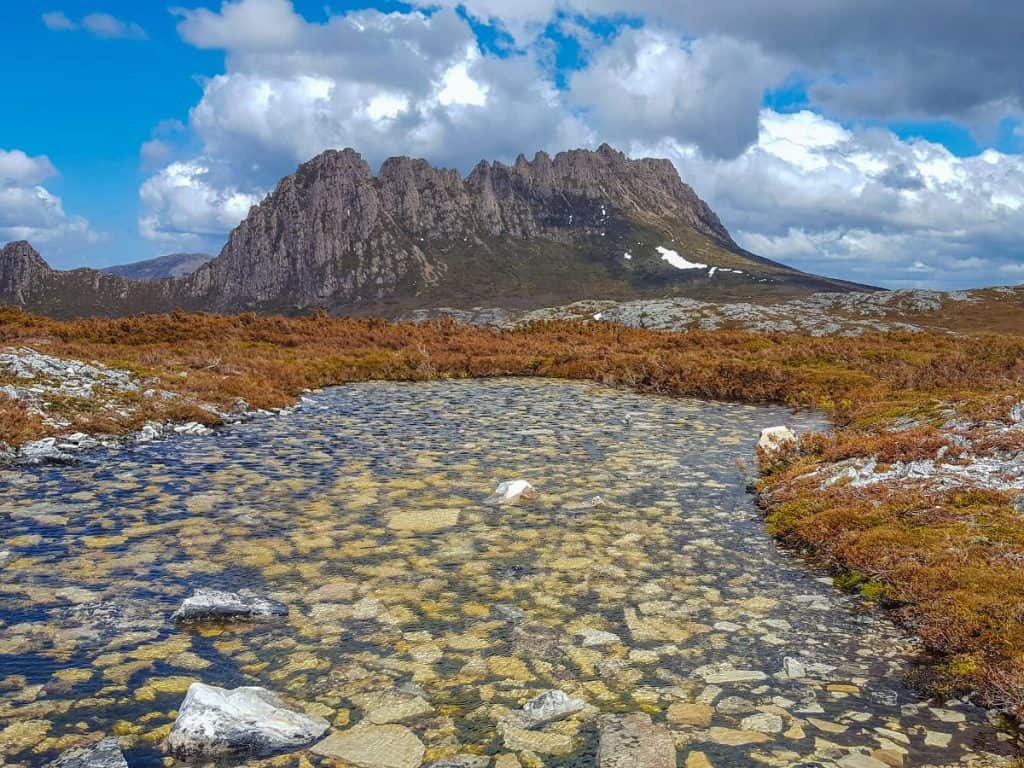 Off the coast of mainland Australia, you have Tasmania and the World Heritage Site of the Tasmanian Wilderness. There are 10 criteria points needed to be heritage listed, and most sites only meet one or two. The Tasmanian Wilderness happens to meet 7 points and shares that amount with only one other site in China.

You can expect to see the stunning raw natural beauty, local wildlife, and exquisite views. One of the highlights would be the amazing Cradle Mountain, with day hikes or helicopter flights in to see it. If you’re looking for adventure, then the overland trek is over 60 kilometres and takes roughly 6 to 7 days to complete. This is a brilliant way to experience the Tasmanian Wilderness. 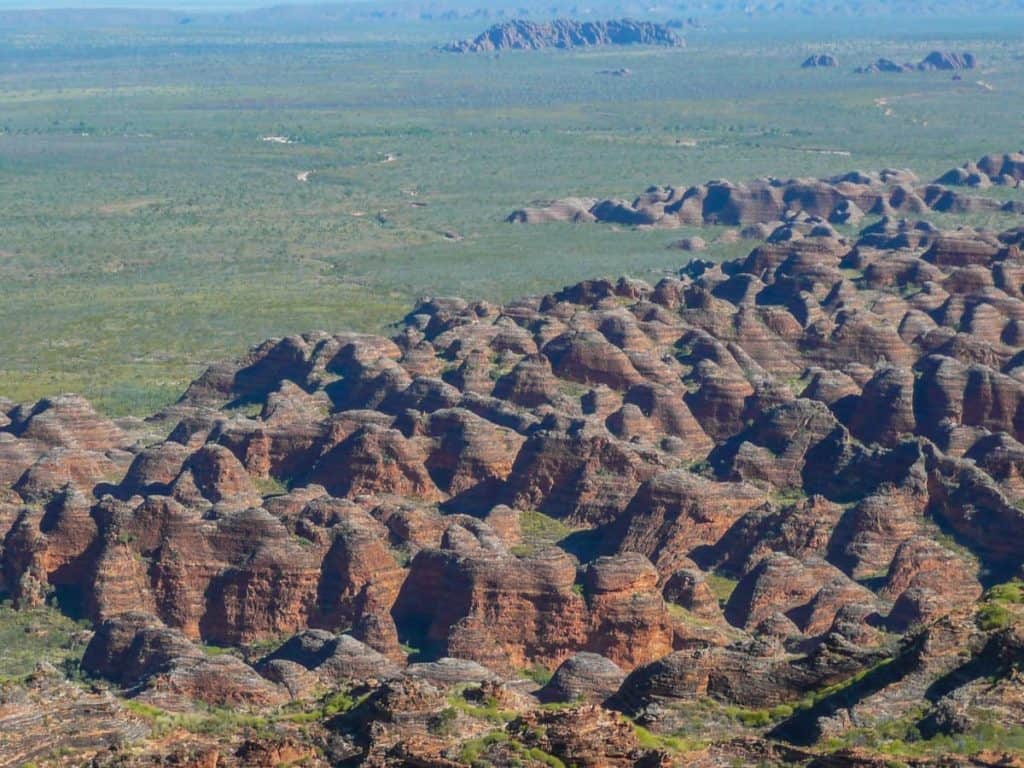 The Purnululu National Park is located in northern Western Australia and has over 50 thousand visitors each year. There are many different sites, hikes, and waterholes to see but your highlight would have to be the Bungle Bungle Range. The Bungle Bungles are giant beehive-looking rock formations that stretch over 450 kilometres over the arid land.

Over 300 million years ago, the domes were formed by active faults and erosion depositing different materials over the area. It was declared a World Heritage site in 2003 and can only be accessed by four-wheel drive. Short hikes and walks can take you in and around the domes, as well as other sites like the Cathedral Caves Amphitheatre.

Furthermore, due to record-breaking summer temperatures, the tourist season is restricted and only open from March to October each year. Conveniently, camping facilities and accommodations have been set up to help you make the most of the Purnululu National Park. Although it does help to book early with limited availability. 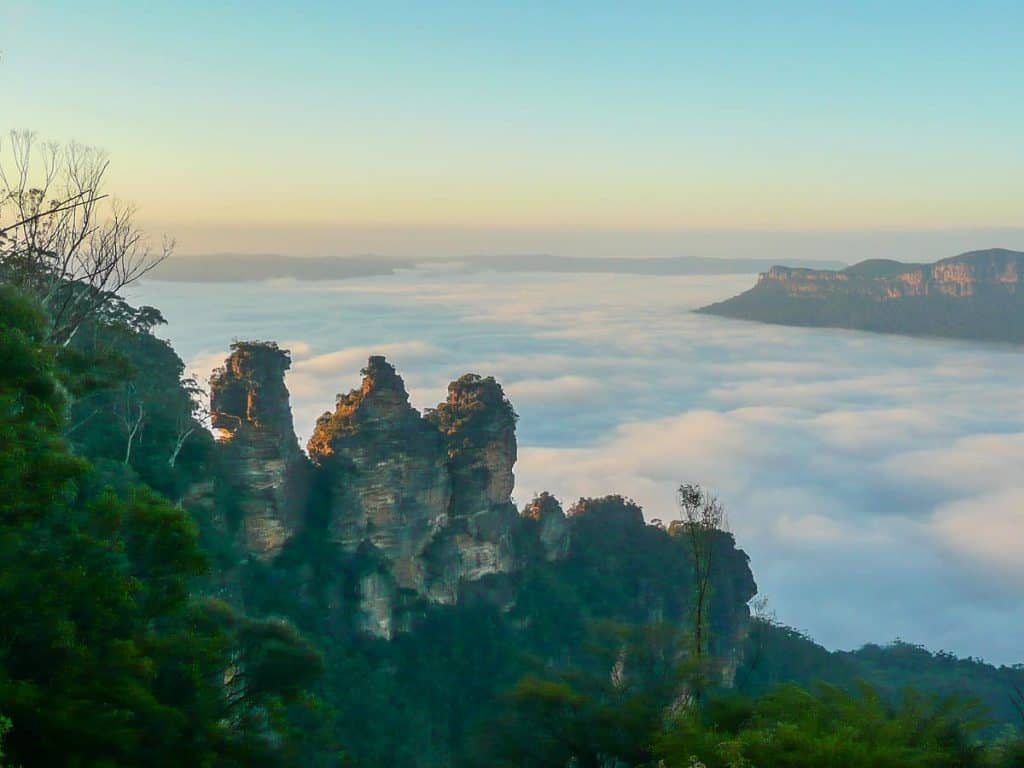 The Greater Blue Mountains area covers over 1 million hectares of sandstone plateaus, gorges caves, slot canyons, significant rock formations, and eucalypt forests. It also encompasses the Wollemi National Park, Yengo National park, Nattai National Park, and the Kanangra-Boyd National Park. Not only that but entered as one of the World Heritage Sites of Australia in 2003.

It’s only a quick 2.5-hour drive away from Sydney and mostly sealed roads, which can easily be accessed with a two-wheel drive vehicle. Expect to breathe in the crisp mountain air, stay in heritage hotels, or shop around locally sourced produce, or arts and crafts.

One of your biggest highlights is staying near the small town of Katoomba, getting views from a suspended cableway, or riding the steepest train. There are many different walking tracks and hikes where you can reconnect with yourself, along with seeing the popular 3 Sisters rock formation. Additionally, Jenolan Caves are known worldwide, and you could spend days just trying to see inside all of them. 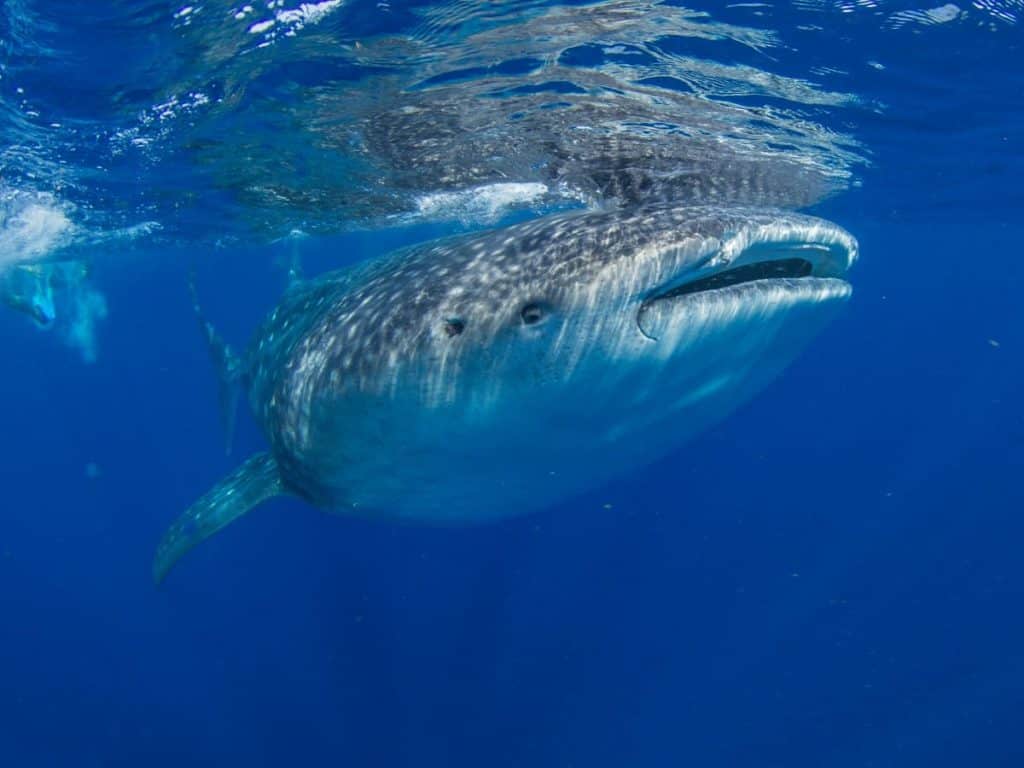 The Ningaloo Coast is located in Western Australia and was listed as a World Heritage site in Australia, in 2011. What’s striking about this coastline is the beautiful blue reef, contrasting against the desolate red sandy coast. It really has to be seen to be believed.

These waters host a major reef system, lagoons, and a continental shelf, which is high in marine life and diversity. A coral spawning event occurs, which attracts migrating Whale sharks around May to August each year. This is a major highlight of the area and an experience not to be missed when visiting.

On land, you will find lots of rocky shores, sandy beaches, estuaries, and mangroves. Not only that, but an extensive network called the Karst System. This includes hundreds of features of caves and watercourses of the Cape Range. 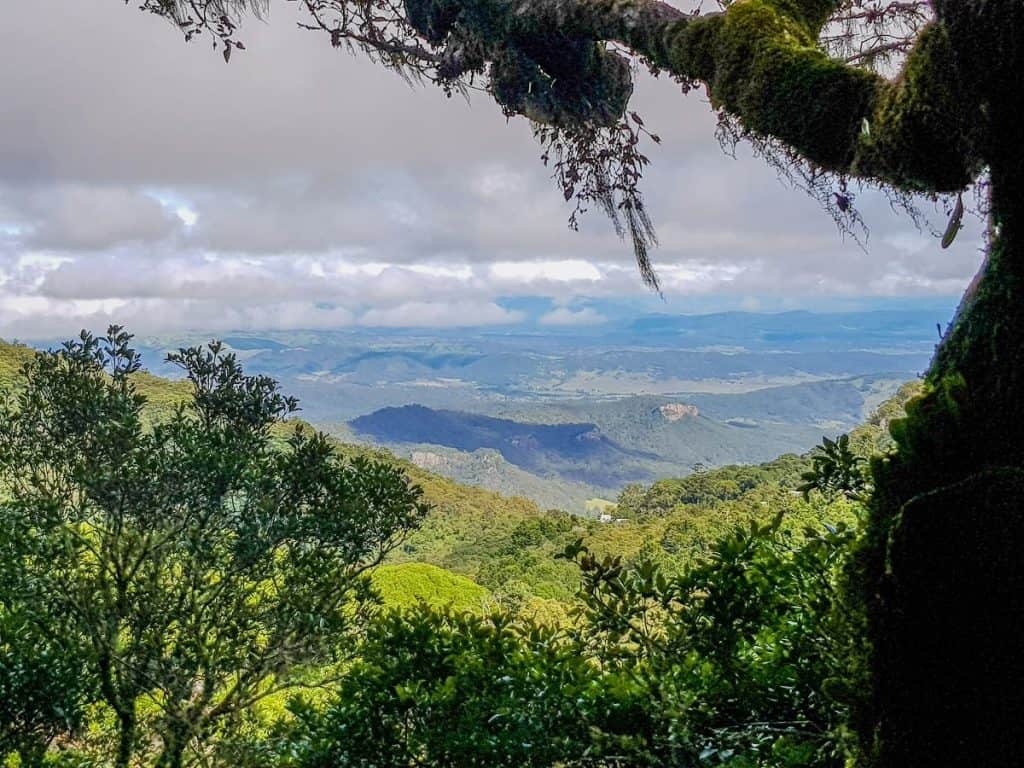 This area was shaped by volcanos, leaving behind a mountainous range and amazing waterfalls, which are now home to more than 200 rare plant and animal species. Mount Warning (Wollumbin) is the remnant of a central magma area, which is now an extinct volcano. It’s now known as one of the best examples of erosion caldera in the world. This is where a volcano will erupt and collapses, forming a large depression.

Over 2 million people will visit the Gondwana Rainforest each year for hiking, swimming in waterfalls, the unique wildlife, and as a way to get back to nature. 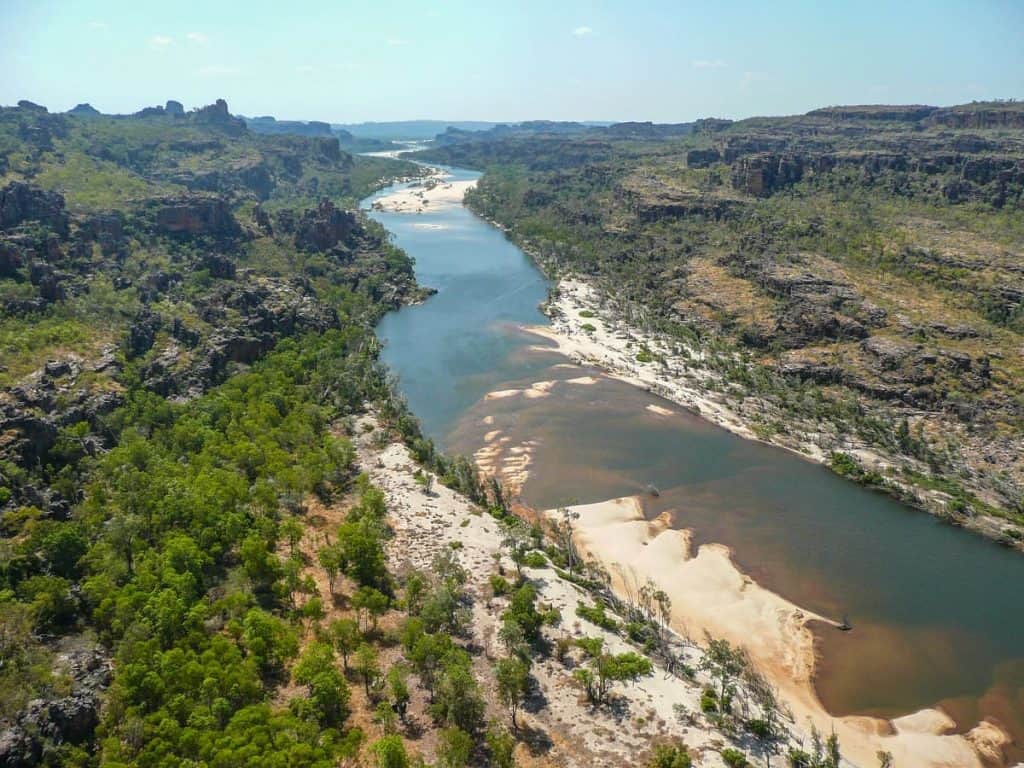 The Kakadu National Park is almost 20 thousand square kilometres in size, more than 65 million years old, and one of the largest National Parks in Australia. It’s located in the Northern Territory and is one of the oldest living cultures on earth.

The Park is managed by Parks Australia, but in partnerships with Kakadu’s traditional owners – the Bininj Mungguy people. More than half the park is Aboriginal land, and some of the oldest rock wall paintings are said to be up to 20 thousand years old. It’s a place of ecological and biological diversity and home to a range of rare and endemic plants and animals.

Being located in Northern Australia, every summer (December to February) the area will receive over 1.5 metres of rain. This makes a lot of areas inaccessible, and most of the National Park is covered in floodwaters. This is also where you’ll find the largest collection of crocodiles, can you believe more than 10 thousand!

Guest Author: Chris Fry is the writer and photographer behind Aquarius Traveller, where she shares her journeys, provides valuable information and inspiration for your land and underwater travels. She lives in Australia, and has travelled to 36 countries and across Australia 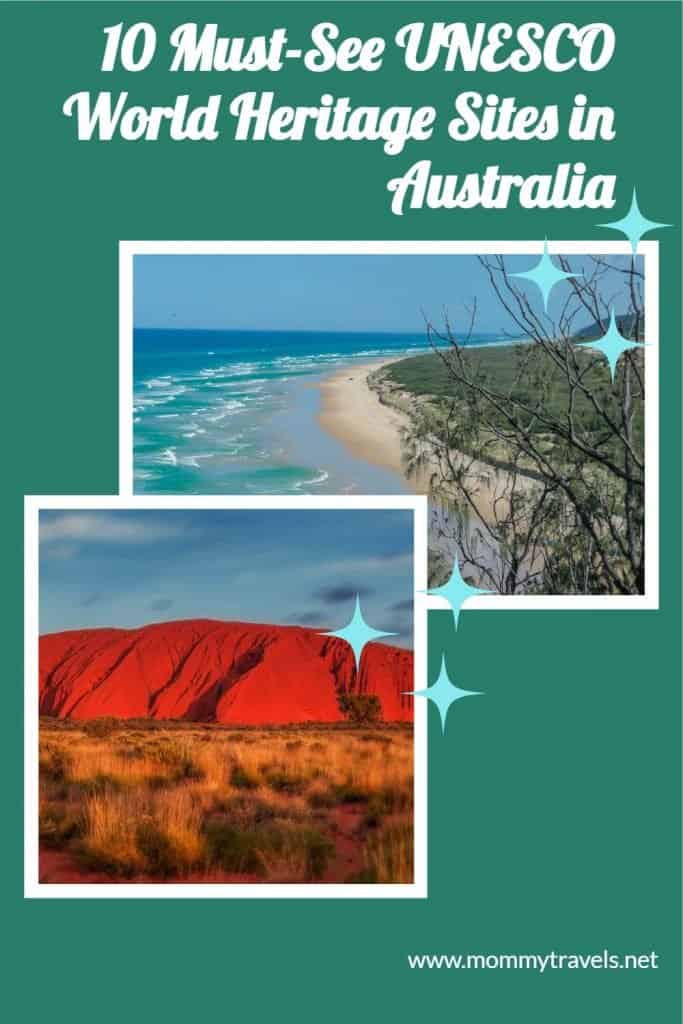