While we were at Disney World we took Jonah to the Magic Kingdom for his 1st haircut! He did really good, it was only $14, and he received Mickey ears and a certificate!

Here are a few tips in case you are thinking of having your child’s first hair cut at Disney World.

1. Get to the park as early as you can.  Be there when the gates open.  I mean the gates right in front of the Magic Kingdom, not the monorail. If you get there early enough you get to see a little show too.

2. Head to the barbershop as soon as you get into the park.  It is on the left of the circle before you start walking down Main Street over in a corner.

3. There will be a line and typically there are only two ladies doing hair. If you get lucky there might be three. They get regular breaks and take their time with each child. You are going to be in line a while!

5. While you are waiting in line one adult can keep the place in line while the other takes the kids to meet characters. We were in line for so long my kids met Chip n Dale and the cows. (I don’t know their names) We got in the line at 9:30 only 30 minutes after the park opened but the line was so long we were in it for over an hour. Now that you can see Mickey near there that’s also a good way to kill some time.

6. Do Not wait until later in the day to get this done. They close early around 4 PM. 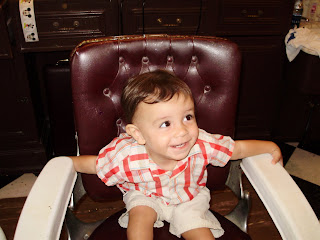 To keep the kids from moving all over the place they stick stickers all over the smock and their clothes. The kids focus on moving around or taking off the stickers. 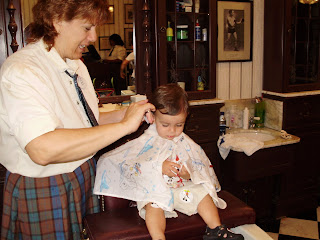