Have you considered buying a hybrid vehicle? How about a hybrid that you have to plug-in? Find out why people love the 2018 Honda Clarity hybrid plug-in. 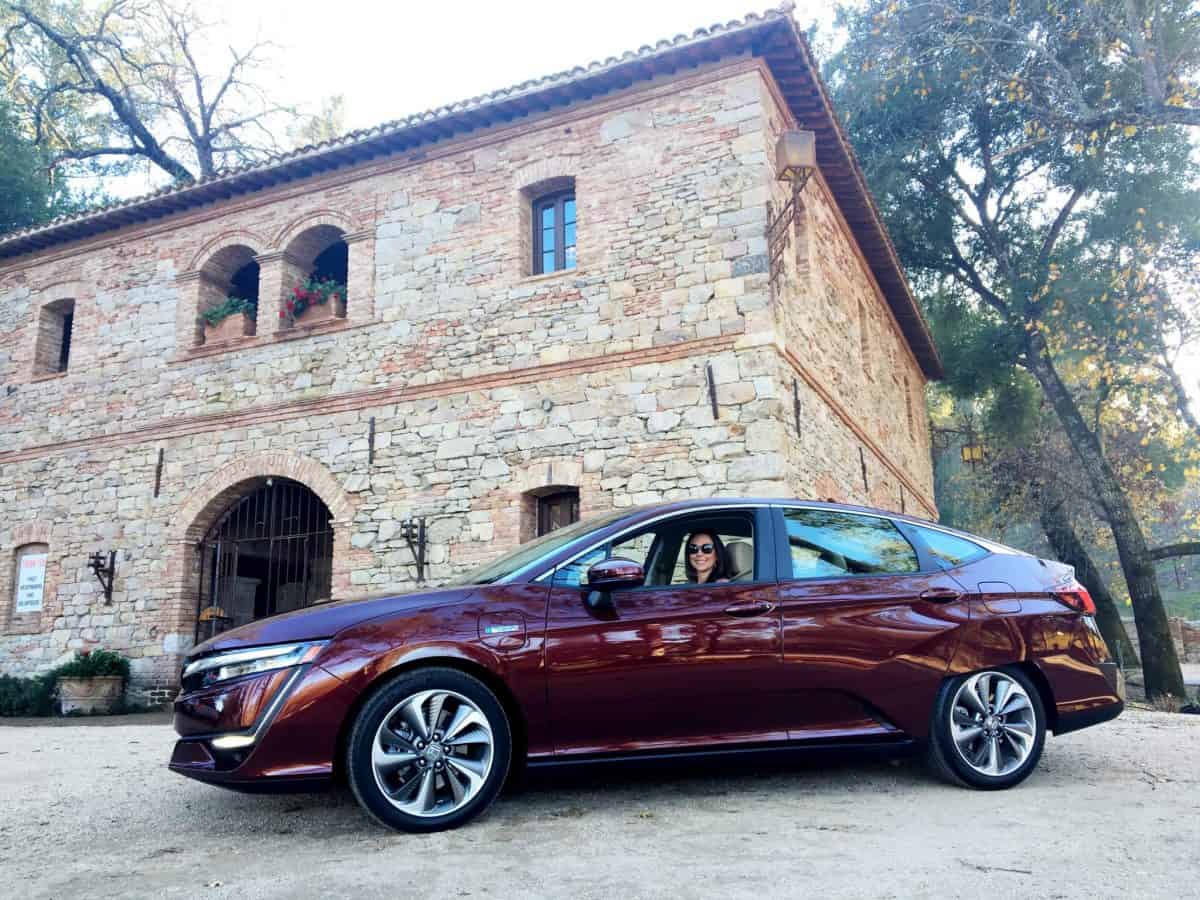 Last week I ventured down to California with one of my besties, Dawna from Fit Guitar Girl, to test drive the 2018 Honda Clarity plug-in hybrid. We had ourselves a real good time, hot tubbing, boutique-ing, biking, and wine tasting, we even found a castle. More importantly, we learned a ton about the new 2018 Honda Clarity and got hands on driving time with it. I was surprised by what I experienced and learned.

It turns out that I had quite a few misconceptions about plug-in vehicles. The biggest misconception was probably over the car size. I assumed that because it was a plug-in car it was going to be small. As soon as I saw it in person I was shocked how large the car is. It is a full size sedan that can seat 5 adults and has a large trunk.

What did not surprise me was how nice the car was overall. I knew the 2018 Honda Clarity plug-in hybrid had just won the Kelley Blue Book Best Buy Award and was named the 2018 Green Car of the Year.

What is a plug-in hybrid?

A hybrid is a vehicle that operates on battery power and gas power. The car switches between the two, depending on how charged up the battery is and how the person is driving the car. A plug-in hybrid is the same thing, except you plug the car into an outlet to recharge the battery. The Honda Clarity plug-in hybrid will drive 47 miles on the electric only. This is one of the best out of every plug-in hybrid on the market.

Unlike the other plug-in car I drove earlier this year, the Clarity has the plug up front on the drivers side. This is a much better location for the plug, in my opinion. It’s odd how a simple step like plugging in your car can become a hassle if you need to back the car in.

Honda is putting its “Honda Sensing” technology into all Clarity cars, even the base model. This driver-assist technology does a variety of things including:

The base model has a starting price of $33,400. It comes with 18” alloy wheels, Honda Sensing, LaneWatch, a rearview camera, heated front seats, and more. Beautiful Inside and Out

I think the exterior of the car is quite nice. Honda offers an exclusive color just for the 2018 Honda Clarity Plug-in Hybrid, new Moonlit Forest Pearl. Depending on the light the car look will shift between green and dark blue. The air curtains and tires look cool. They are 18′ Michelin Energy saver tires. None of the pictures I took show off how wide the vehicle is. Like I mentioned above, I was surprised how big the car is overall. Part of why it seems so large is the low, wide-body and the added LED lights to the front in a way that emphasizes the width.

Just as nice is the inside of the vehicle. Inside they’ve used suede, leather, and wood. It gives it a slightly more upscale relaxed feeling. The back seat has enough room that I was able to sit back there and not feel cramped. I am 5’7″ and the guy sitting back there with me was even taller. We were both comfortable. The back has air vents, an outlet for charging, and cup holders that fold down from the center seat. One odd feature was the extra little pocket on the back of the front seats. I’m not sure what purpose this serves, maybe to hold your cell phone. How the Clarity Plug-in Drove

I liked the way the Clarity drives and how quiet the car is. We drove it around for about 3.5 hours and the drive route was incredibly windy. Usually when I am driving a road that has one turn after another for such a long period of time I feel exhausted. I did not feel so worn out driving the Clarity like this, which was a nice surprise. Granted, when the road was straight I relied on the Road Departure Mitigation and adaptive cruise control and let the car drive itself.

Read more reviews before you make a decision!

Disclosure: Honda hosted me on this trip. Look at this awesome resort, we got to stay at, Solage Resort!