26 Best Milkshakes in the World

26 Best Milkshakes in the World

Do you want to experience the best milkshake in the world?

So do we! That’s why we try milkshakes everywhere we go. 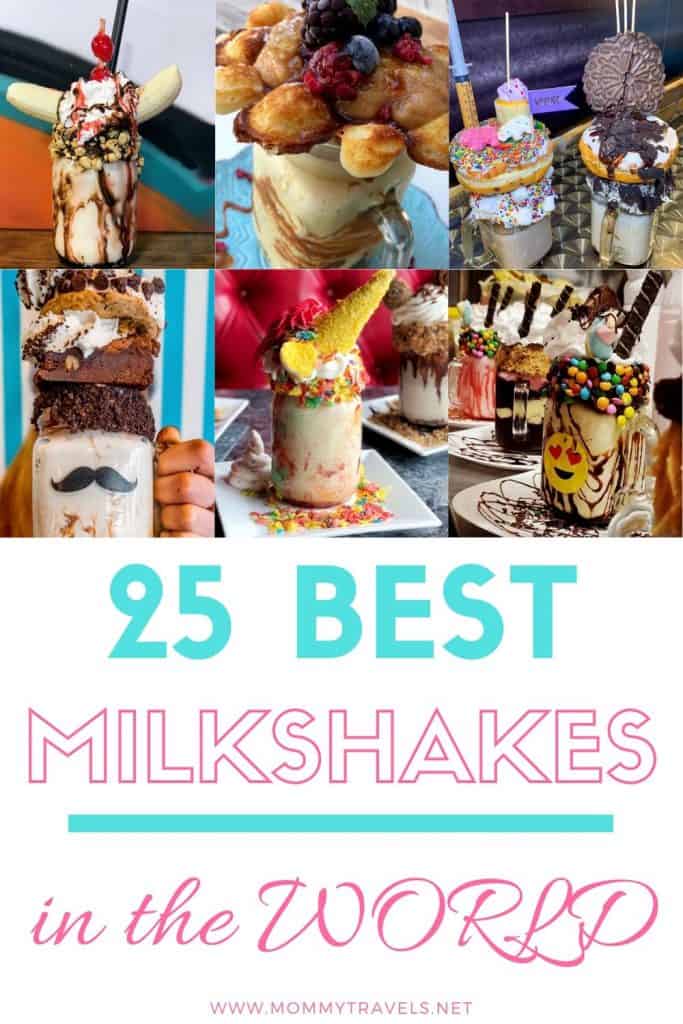 Have you ever sat and wondered, “Where can I find the best milkshake in the world?”.

I am assuming everyone sits around wondering this. I know I do, I mean, who doesn’t love a good milkshake?

In our family a good milkshake is a good enough reason to go out of the way to eat somewhere and I mean totally and completely out of the way! This might be part of the reason I just can’t drive past a Sonic without pulling over!

Here are 26 of the best milkshakes in the world and where to find them including shakes in NYC, Orlando, Las Vegas, Brazil, Australia, Madrid, and many more! Originally this list only had 7 milkshakes, but we are happy to report that we keep finding more worth adding to the list!

Where to Find the 26 Best Milkshakes in the World 2 of the milkshakes at Black Tap

1. Black Tap in NYC is a burger and beer place with multiple locations in NYC and now one in Anaheim at Disneyland and Las Vegas. But I must say it’s not really the beers and burgers I think people are going there for. Granted, their burgers are wonderful. Skip the salad burger, it wasn’t as good as just having a burger. Nowadays there is usually not a wait to eat here anymore, but sometimes the wait times can get bad. The milkshakes are not cheap but just look at them. Worth it! The kids and I all had burgers and split two milkshakes and dinner cost about $110. 2. Naughty Boy Cafe in Melbourne, Australia is open for breakfast and lunch. Their food looks really good, but honestly, I would just be going for their milkshakes.

Update: I finally got to eat here after salivating over their photos and it was slightly disappointing, my milkshake looked like a child had made it. It was so bad I may have to remove them from this list. 3. Garage 51 in Kuala Lumpur, Malaysia is a pork-free cafe with some wildly awesome milkshakes. Now I do not know how many people are visiting Malaysia, but this definitely gives me another reason to try and make it over there! 4. Toothsome Chocolate Emporium at Universal City Walk in Orlando, Florida has incredible milkshakes. 3 – 4 people can split one of their milkshakes because they are so large and so rich. Their regular menu is full of good food too. A Strawberry Cheesecake Milkshake at The Coffee Club in Bangkok, Thailand

5. The Coffee Club in Bangkok, Thailand happen to be located in the lobby of the hotel we were staying in while we were in Bangkok. Imagine our surprise when we realized there little hotel cafe had these incredible shakes. We ended up eating here 3 times! (Yes, we are pigs. We don’t care.) Recently, during our trip to the Whitsunday Islands in Australia, I realized that they have other locations. There is one near the marina in Airlie Beach, Australia. 6. Benjamin Browns in Singapore inside the Forum Shopping Centre have the most fantastic over the top milkshakes. Randomly enough when we arrived in Singapore a friend I hadn’t seen in years got a hold of me. It turns out they now live in Singapore. She insisted we try Benjamin Browns and I am so glad we did. Their milkshakes pretty much blew our minds. Their address is 583 Orchard Road, Singapore 238884. 7. Eis Cafe in Birmingham, Alabama look spectacular and massive. I recently looked at their Facebook page and see the milkshakes getting even bigger! 8. Creme Cakes and Shakes in Southend-on-Sea (east of London) has your milkshake covered in cakes. I gotta say, great idea. Most people like cake too. 9. Cowfish a Burger Sushi Bar in Orlando makes spectacular alcoholic milkshakes. They are not as over top as the others on this list, but they are just so good. I sucked my spiked milkshake down in a matter of minutes. All the food here is excellent. They also have locations in Charlotte and Raleigh. a Frozen Hot Chocolate at Serendipity 3

10. Serendipity 3 is super famous already for their desserts and they should be. We couldn’t have a list without including their version of a milkshake: a frozen hot chocolate. You can find this at their NYC location. If you could go to either go to both because they are completely different. 11. Buns Bar is a tiny little restaurant and bar in NYC in the Chelsea area. I discovered this place on SnapChat and took the kids to have milkshakes on our last trip to NYC. We ordered a couple of plates of sliders for dinner and they were excellent too, but as you can see the milkshakes are more than enough to fill you up! A salted caramel shake at The Yard Milkshake Bar

12. The Yard Milkshake Bar in Panama City Beach have what my kids declared “The best milkshakes they have ever had!”. Considering the unreasonable amount of milkshakes we have all had I think they are experts and this cannot be ignored! I know that this place is expanding to other areas like the Alabama coast. 13. Gulf Coast Burger Co., also in Panama City Beach has amazing shakes too, and they are slightly more affordable than most freakshakes we have had. They are gigantic. You will not have room for a burger and a shake here. I recommend ordering one burger and one shake per two people. 14. Cafe Hollywood located in Las Vegas inside of Planet Hollywood has some mighty tasty and good looking milk shakes! Unicorn Freakshake at Ten One Ate in Melbourne, Australia

15. Ten One Ate is a little cafe in Melbourne, Australia and almost everything they serve is visually stunning. 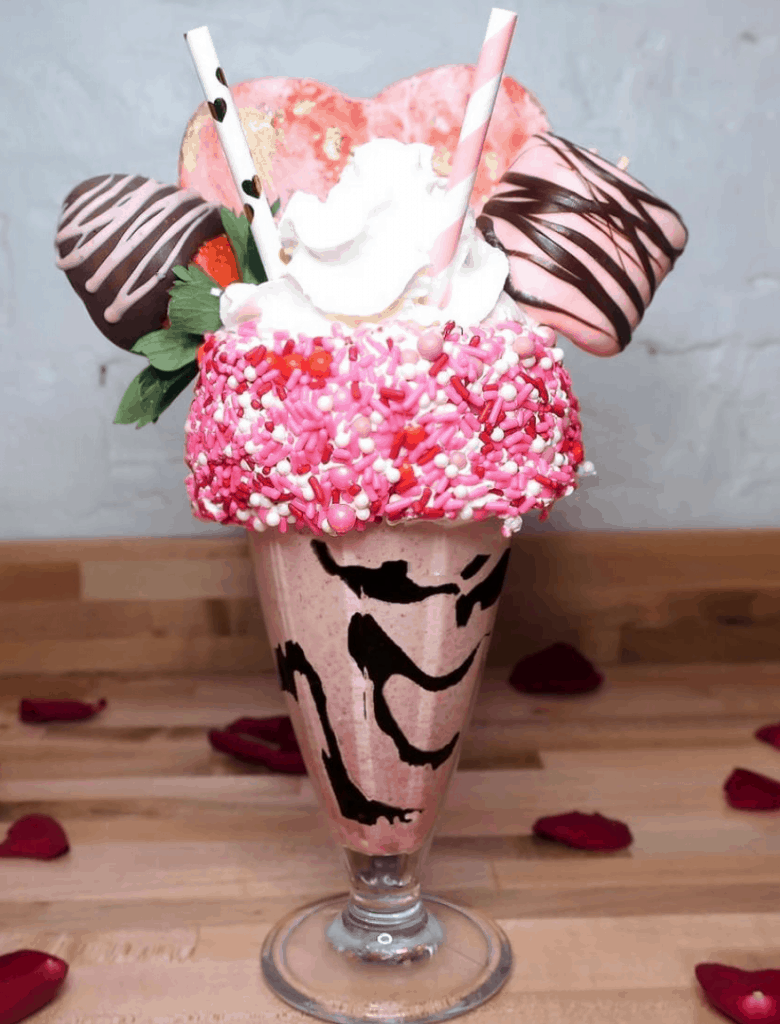 16. JoJo’s Shake Bar in Chicago has some might tasty creations including fun seasonal shakes. They also serve big hot chocolates with jumbo cookies. 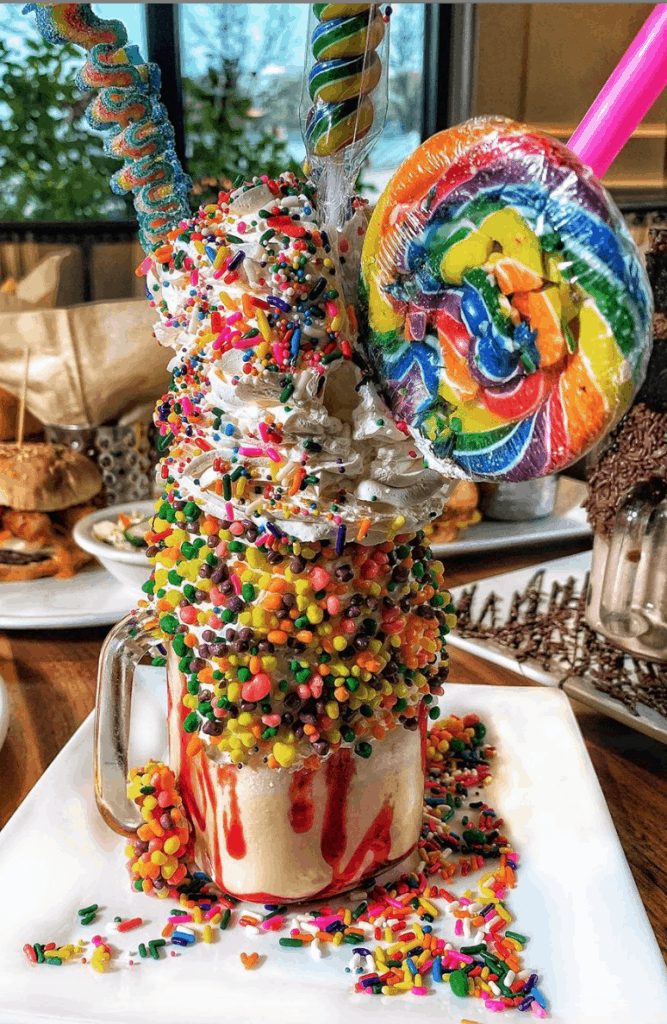 17. Mt. Kisco Coach Diner is dishing up comfort food including ridiculous shakes! Some of their shakes are topped with a slice of cake! 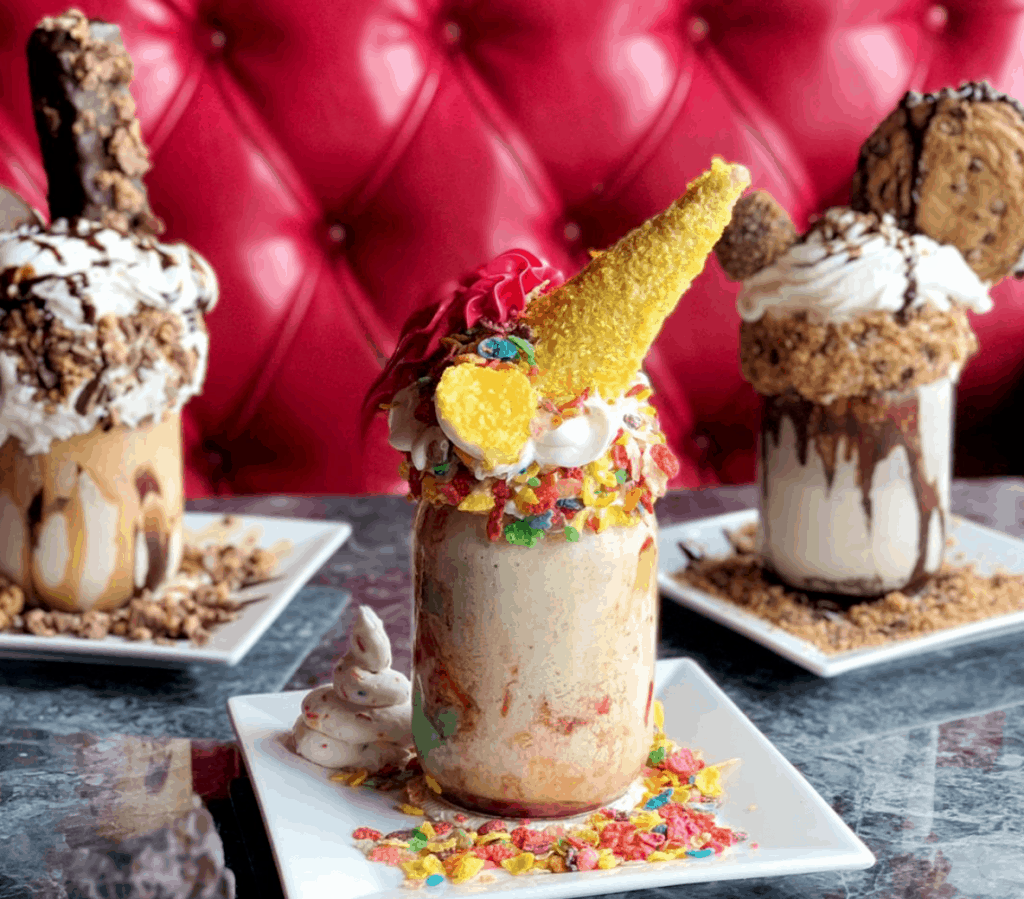 18. Kings Dining and Entertainment has lots of locations including Orlando, Boston, Raleigh, and more. Go bowling and pound shakes!

19. Lola’s in Santiago Chili has waffle shakes! How I went without having a waffle shake my whole life I do not know. 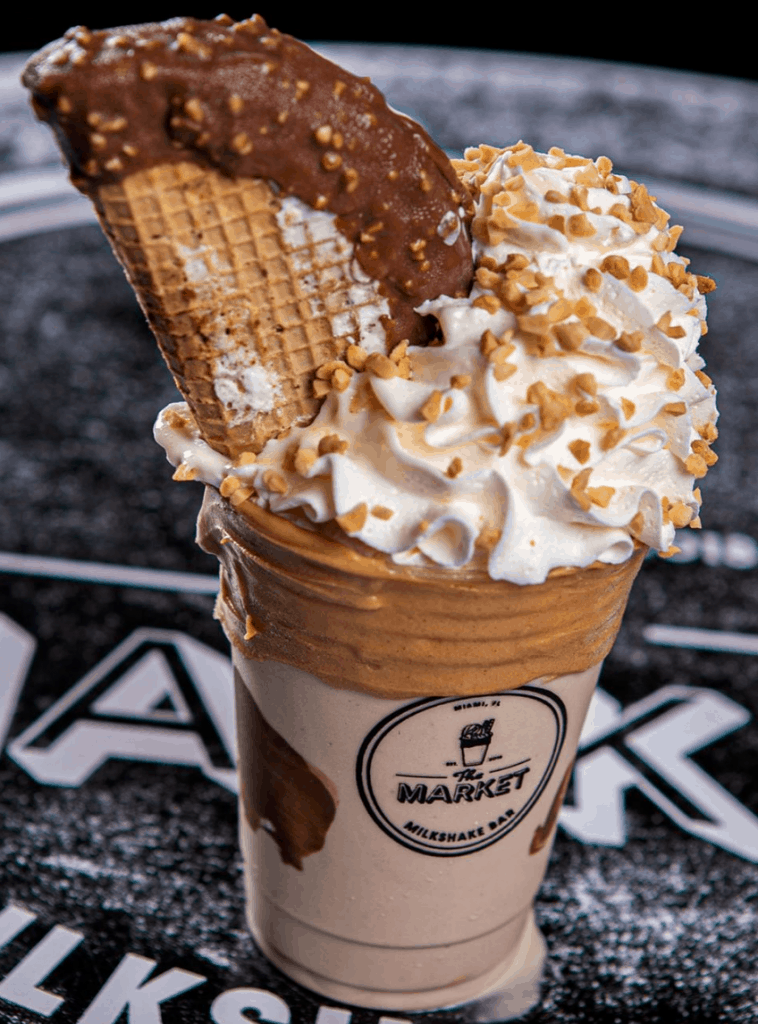 20. The Market Milkshake Bar is a food truck roaming the streets of Miami. They only thing they make are drool worthy freakshakes. They even have vegan shakes. 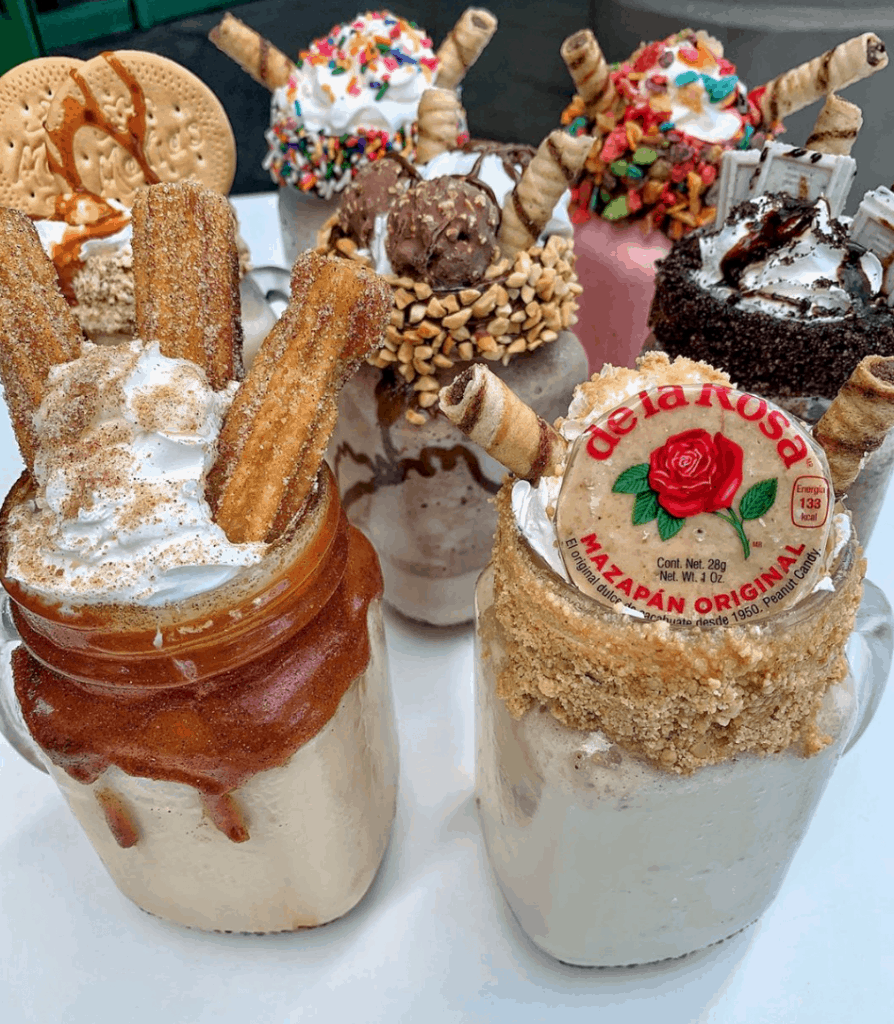 They are located in LA inside Tutti Frutti. 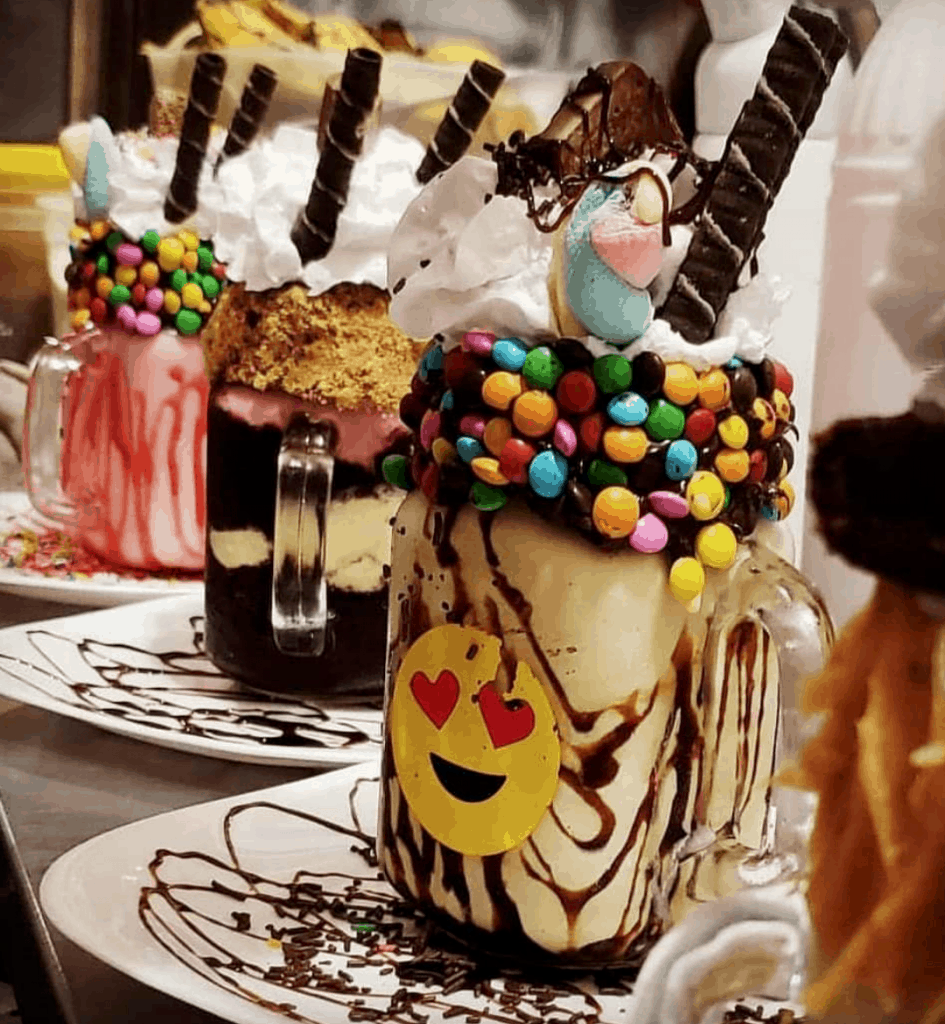 22. Gulla Burguer down in Brazil has burgers, fries, and killer milkshakes. 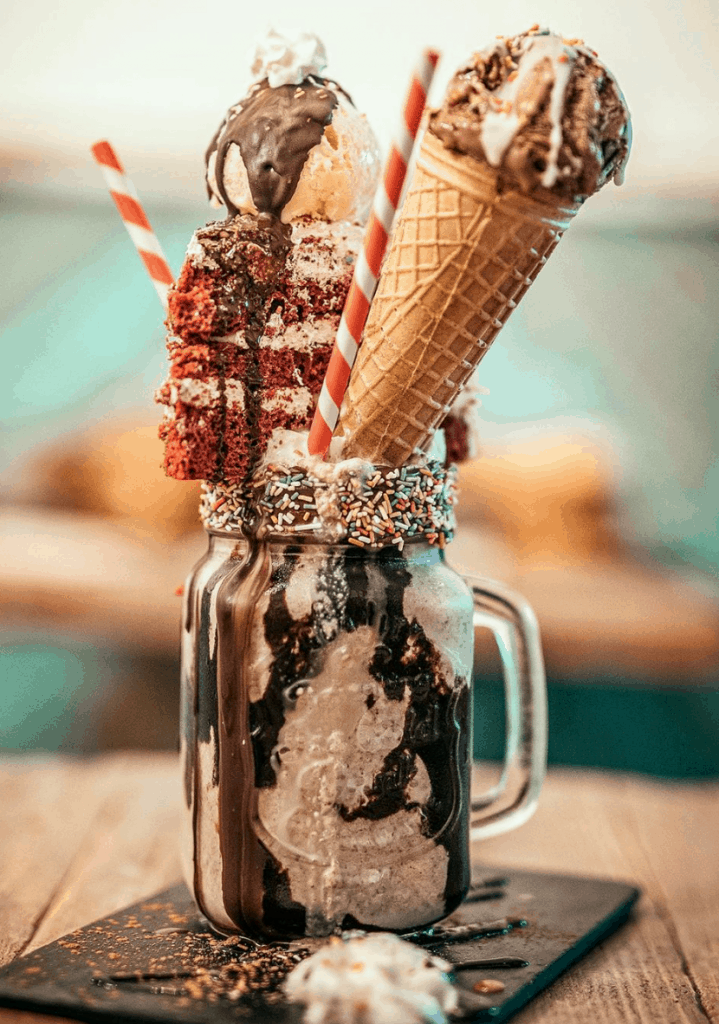 22. Lara Grill has burgers, nachos, tacos, and shakes which makes it one of the best places to eat in Madrid. 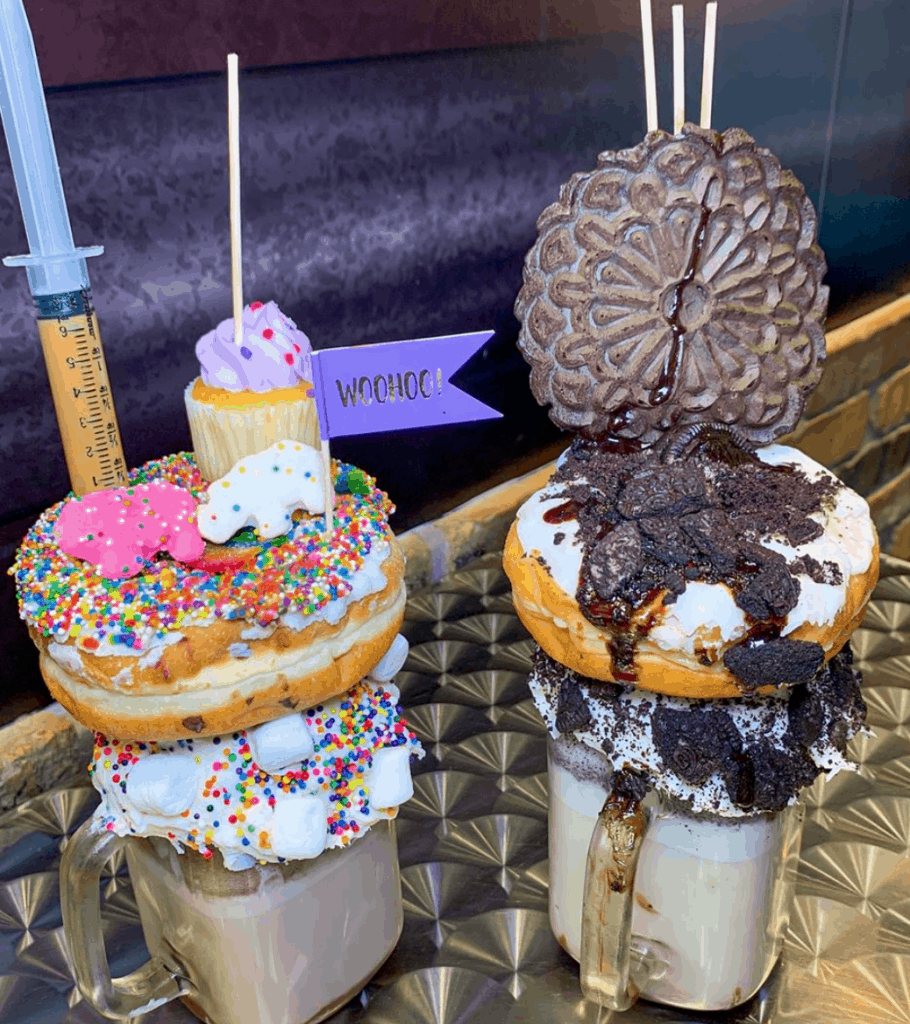 23. Frostbite & Spiked Rich has alcohol infused, donut topped shakes in south Florida. You can get a shake without booze and without the donut. 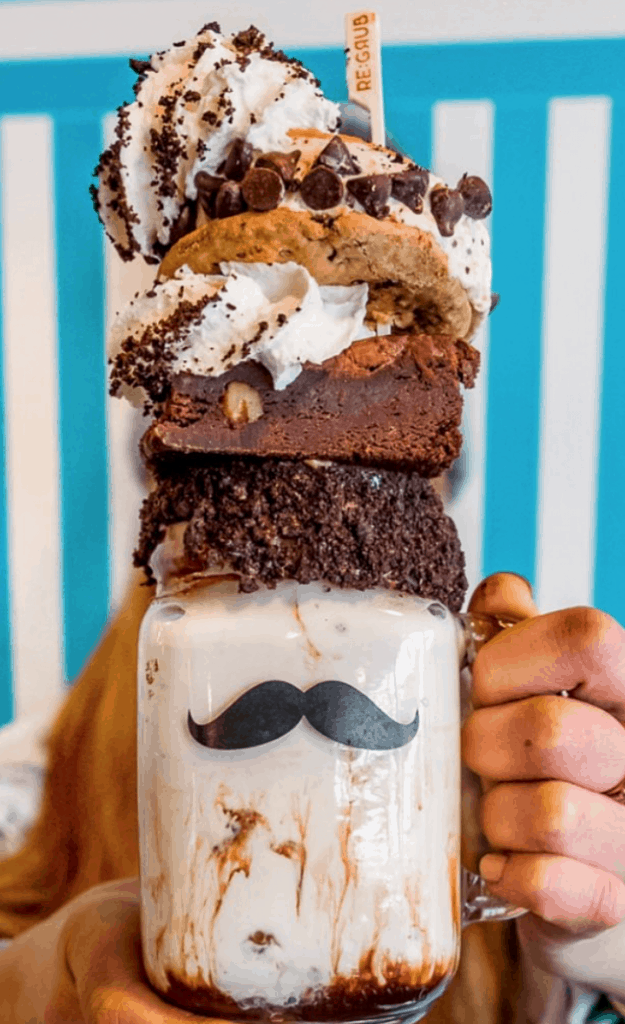 24. #Regrub has burgers and shakes. They’ve got all kinds of incredible milkshakes including vegan options. Harry Potter fans will love the POTTERHEAD a HOGSMEADE Shake infused with Butterscotch Topped with Sweet Spells 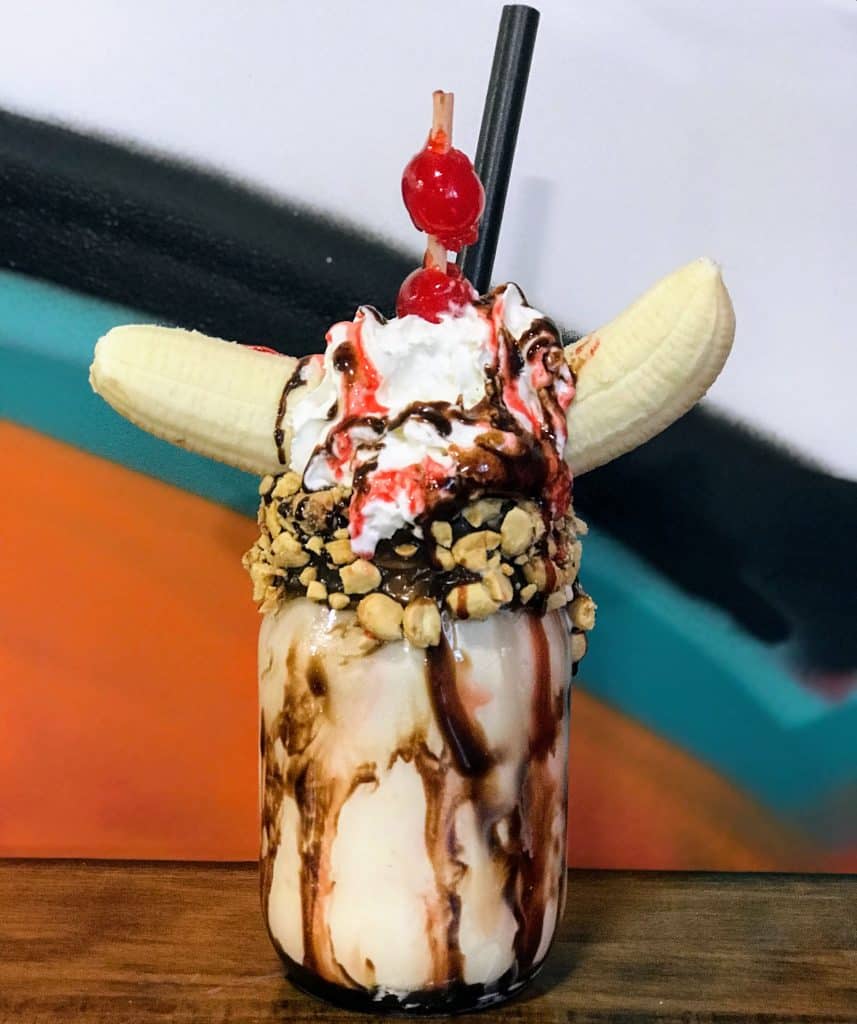 25. unSHAKEable provides employment for people trying to get back on their feet and we are so glad they do because we tried three of their shakes and they were all amazing. Jonah had this banana split milkshake and it was the winner. 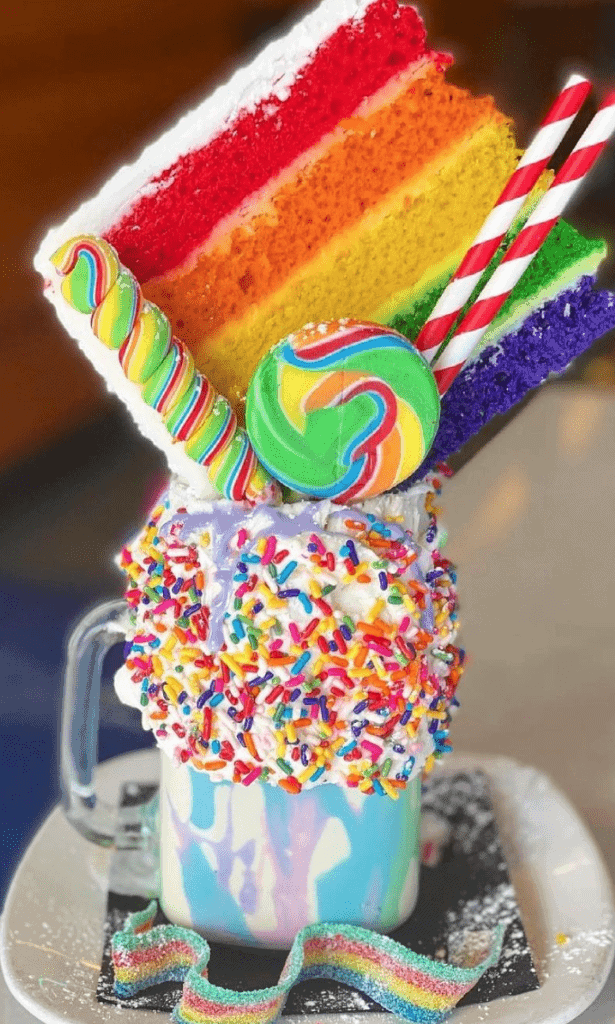 Y’all, I’m not going to lie, it’s flat out amazing to me that I don’t weigh more. But I guess you can tell from this post why I am constantly on a diet. I don’t exactly make healthy choices when I am eating out.

Where’s the best milkshake you have ever had and where can we find it? Drop your recommendation in the comments below!  My kids and I are always looking for some milkshake tips. 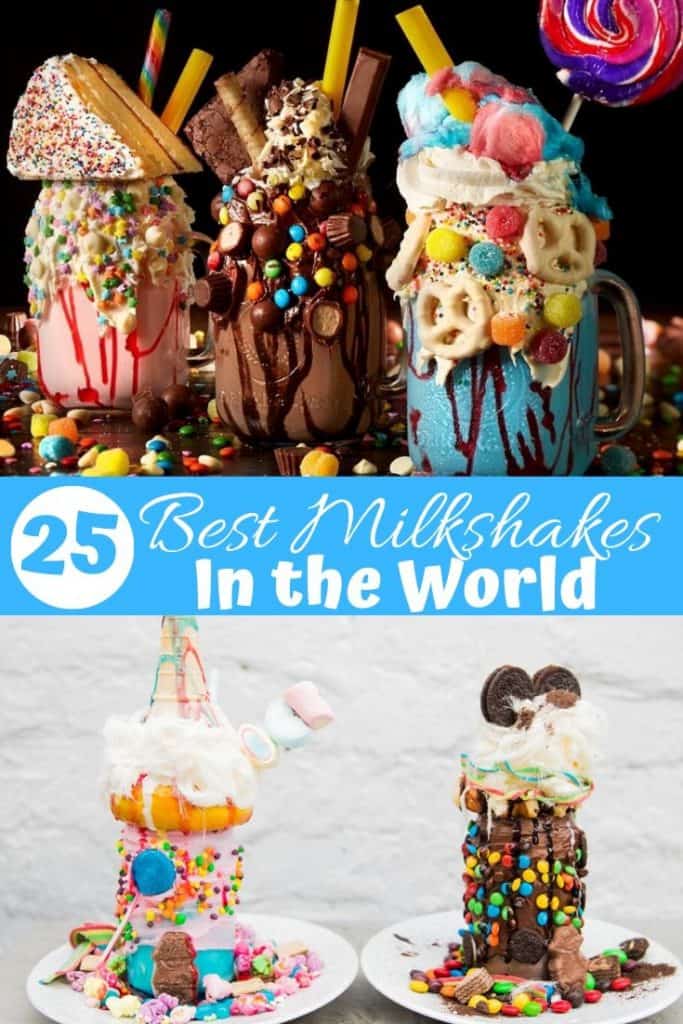