Albuquerque might just be the most underrated place in the United States. For various reasons Albuquerque has gotten a really bad reputation. Whether it’s deserved or not is highly contested amount locals, but as an outsider who has enjoyed visiting twice in less than a year I think Albuquerque is worth another look.

With half a million people living in Albuquerque there is a lot to do. Not to mention the interesting terrain. They have the Sandia Mountains at the edge opening up completely other options like skiing, route 66 runs through town, and a rich history dating back to 1706 when it was first established as a Spanish colony. Plus, they have 280 days of sunshine year round!

Now with all that said, I’m kicking this travel guide off with restaurants instead of activities. Why? Because the food alone makes Albuquerque worth visiting.

Where to Eat in Albuquerque

There’s just nothing quite like New Mexico cuisine and Albuquerque has a seemingly endless supply of the best New Mexican cuisine in the state almost always flavored with freshly roasted green chiles.

Here are the best New Mexican restaurants in Albuquerque, plus a few others serving other types of cuisine. That’s right, Albuquerque has plenty of food options that are not New Mexican and they are good too. (And please, do not get mad at me if your favorite isn’t on the list! I certainly haven’t eaten at all the restaurants there yet!) 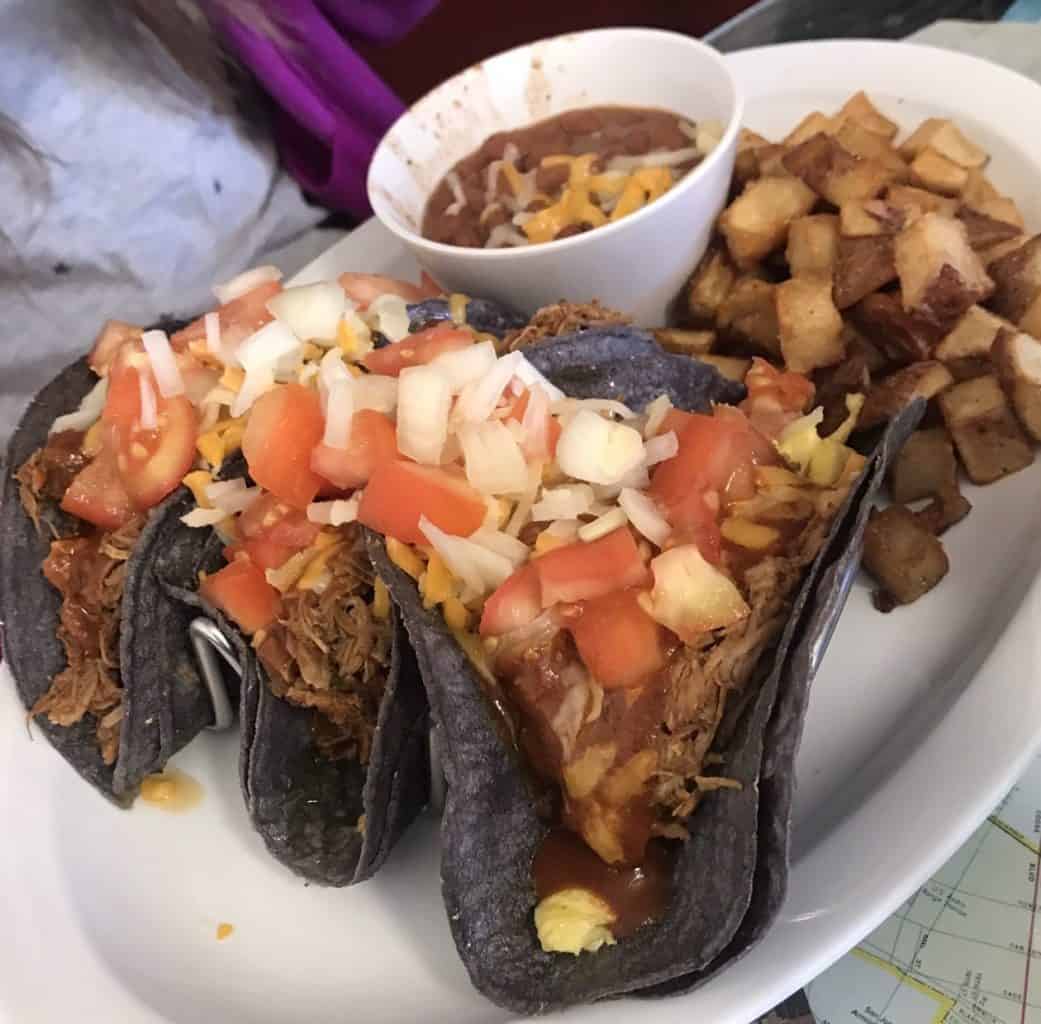 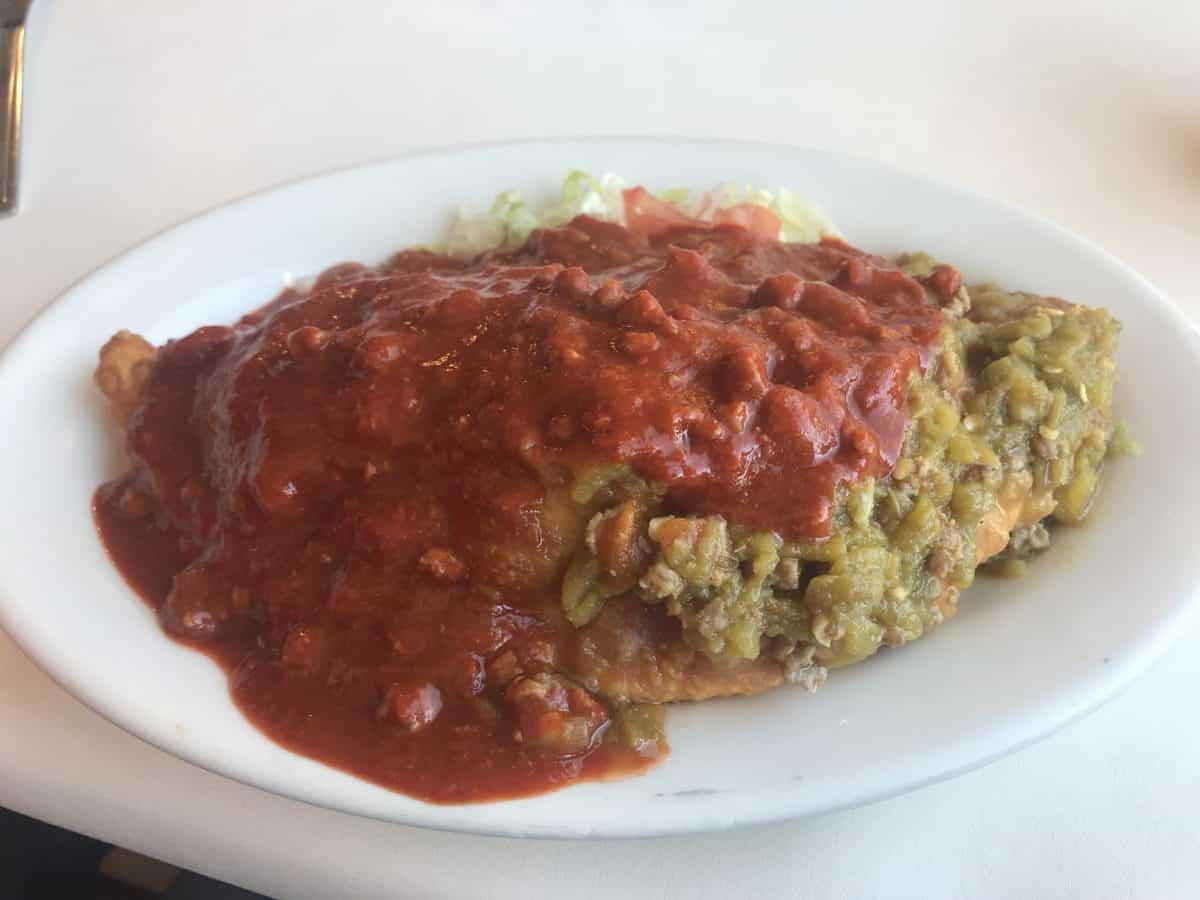 Mary and Tito’s carne adovadas are mind blowingly good. I think I inhaled this in less than two minutes. Next time I will order it with just green chili instead of red and green. You can find Mary and Tito’s at 2711 4th St NW, Albuquerque, NM 87107. 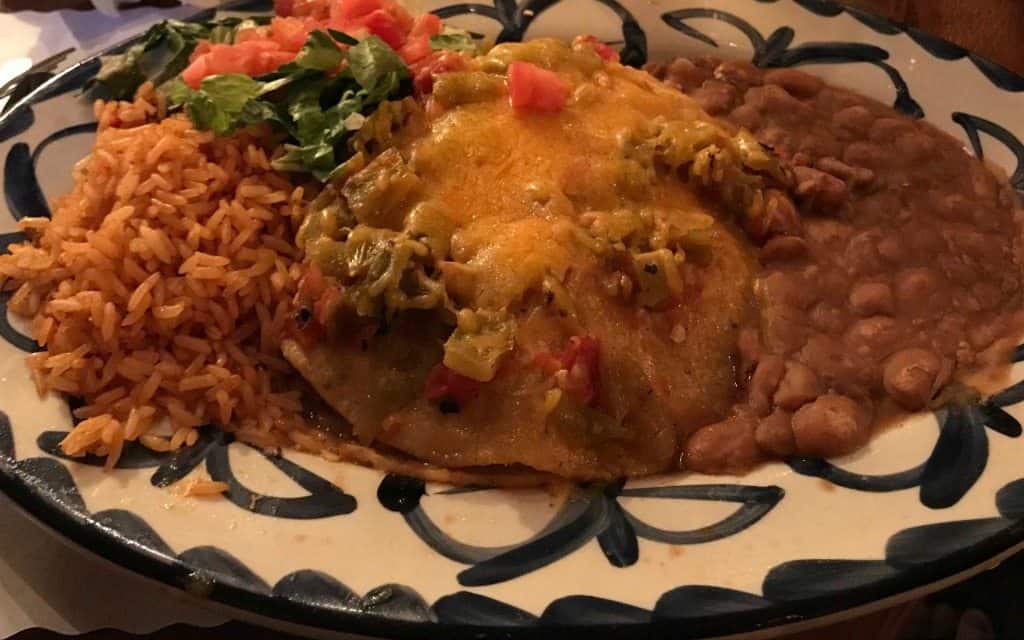 El Pintos is more for the atmosphere than it is for the food. The food is good, but it’s not great. Plan to have dinner at this beautiful spot one of the nights you are in town. The restaurant is massive and on the weekends they have Yogaritas aka yoga with Tequila Barbie a little pig followed by a margarita!

Sadie’s – Sadie’s is considered by many locals to be the best of the best when it comes to New Mexican cuisine. 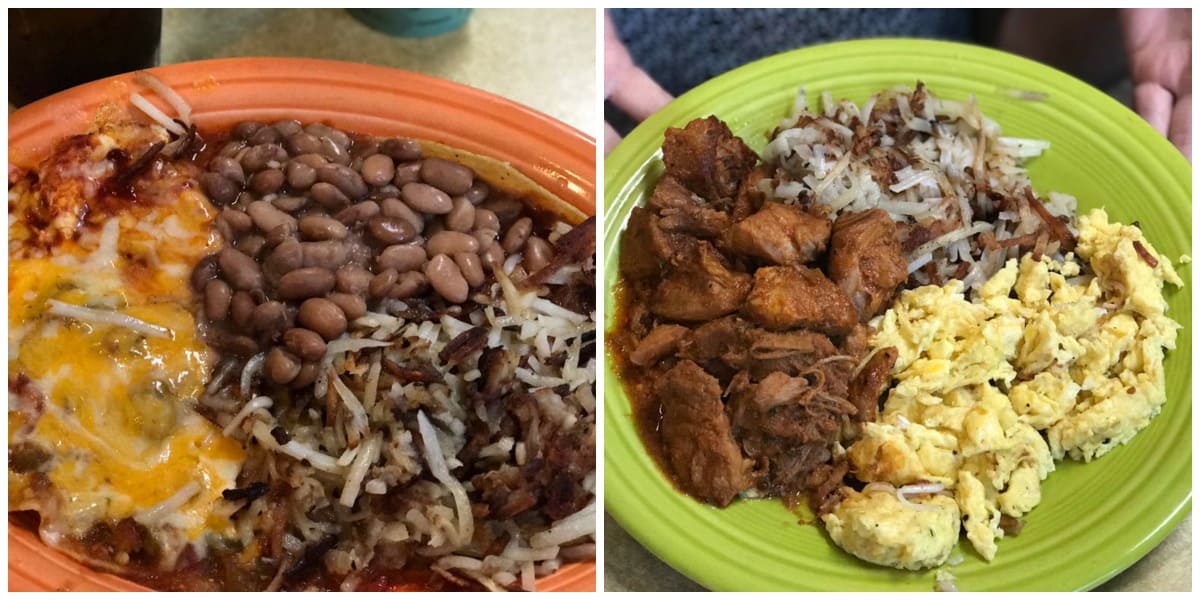 Barelas Coffee House has fantastic New Mexican cuisine breakfast, but it is pretty heavy, so keep that in mind when ordering. 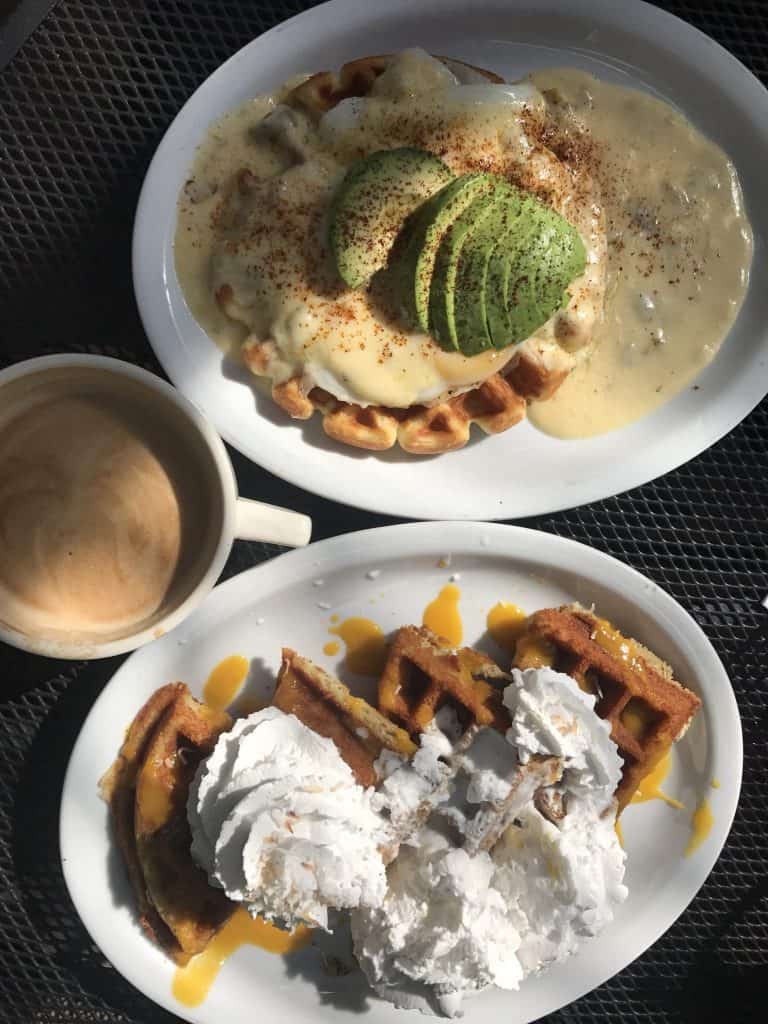 Tia B’s Waffleria is a fun place for breakfast. They have sweet and savory waffles. The waffles are made from blue corn. This is a sister restaurant to Tia Betty Blue’s. They typically have a long line, but it’s worth it. 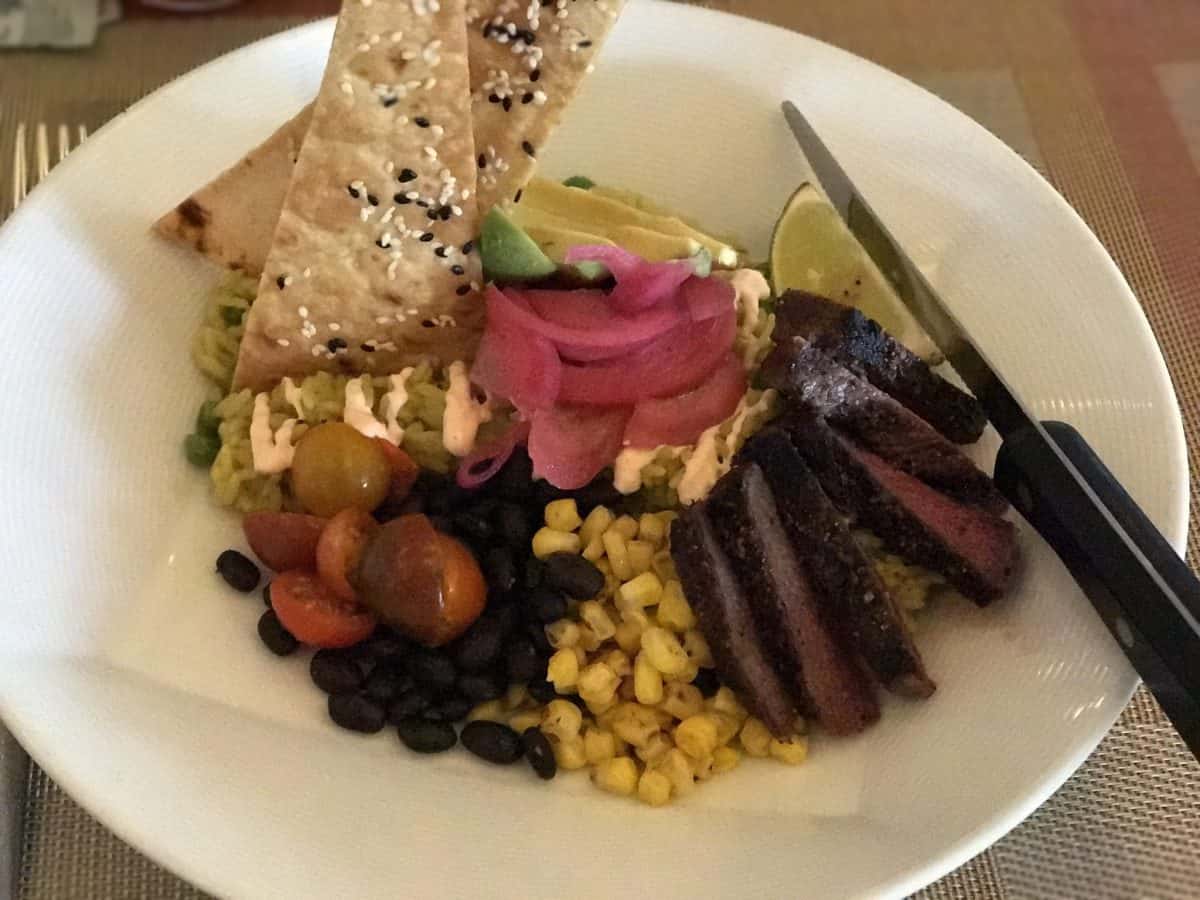 Mas Tapas Y Vino for lunch. They are located inside Hotel Andaluz, an adorable boutique hotel in downtown. 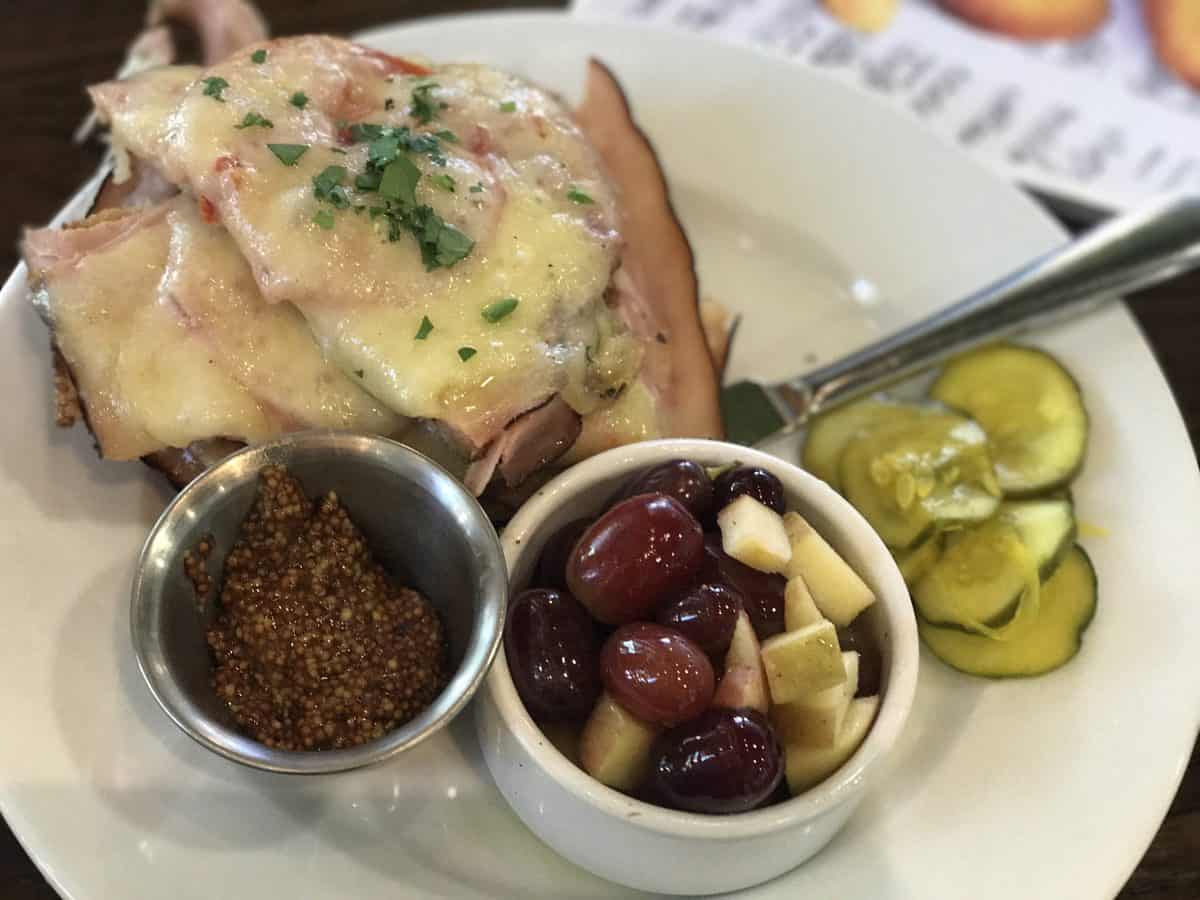 The Grove Cafe is an awesome spot for lunch. If you want to eat something on the lighter side this is where you should go. They are not open for dinner.

Best Places to Grab a Drink in Albuquerque 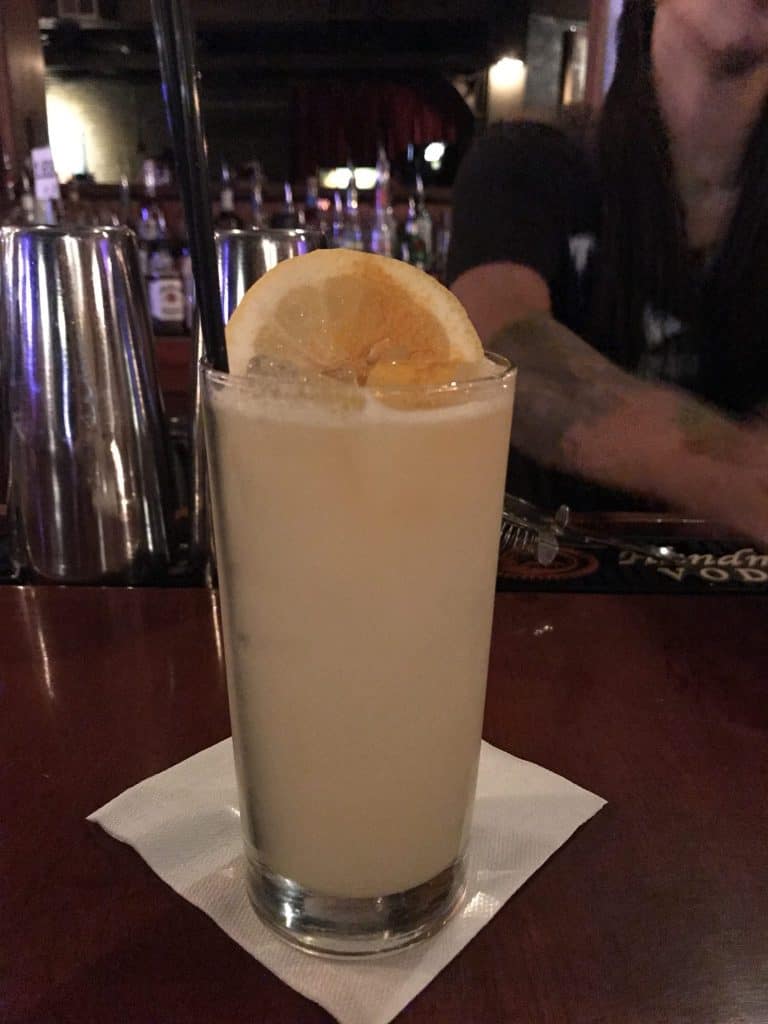 Sister Bar has a little bit of everything. Good food, awesome cocktails, live music, and an arcade. The Thai Moscow Mule is phenomenal!

Apothecary Lounge is a rooftop bar! Technically, it is an indoor/outdoor lounge located on the Hotel Parq Central Rooftop. This is a great spot to enjoy the sunset with an old school cocktail. 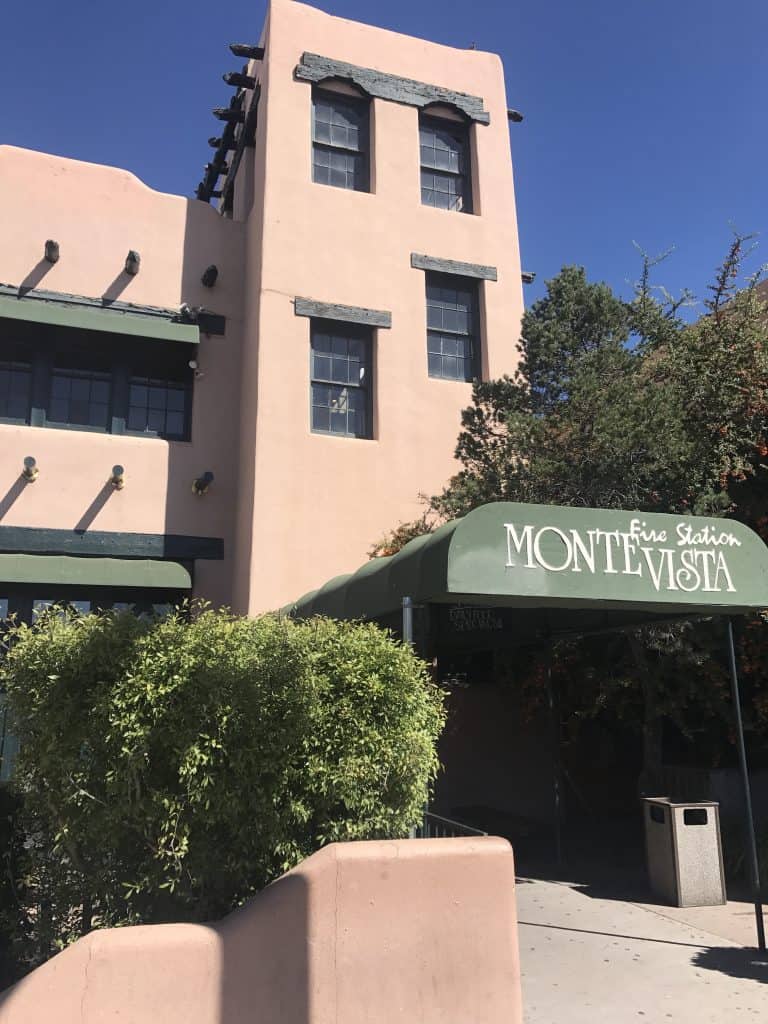 Monte Vista Firehouse isn’t somewhere I have experienced first hand, but I have had friends who have. They highly recommend it, so it of course had to be added to this list!

Ibiza Urban Lounge is another indoor/outdoor bar, but it’s not as high up. Located at Hotel Andaluz this bar has a great atmosphere and a solid place to hang out. If this bar is too crowded you can take your drink down to the lobby aka Casbahs. This area is set up like a hangout as well and despite being a hotel lobby the vibe is cool. 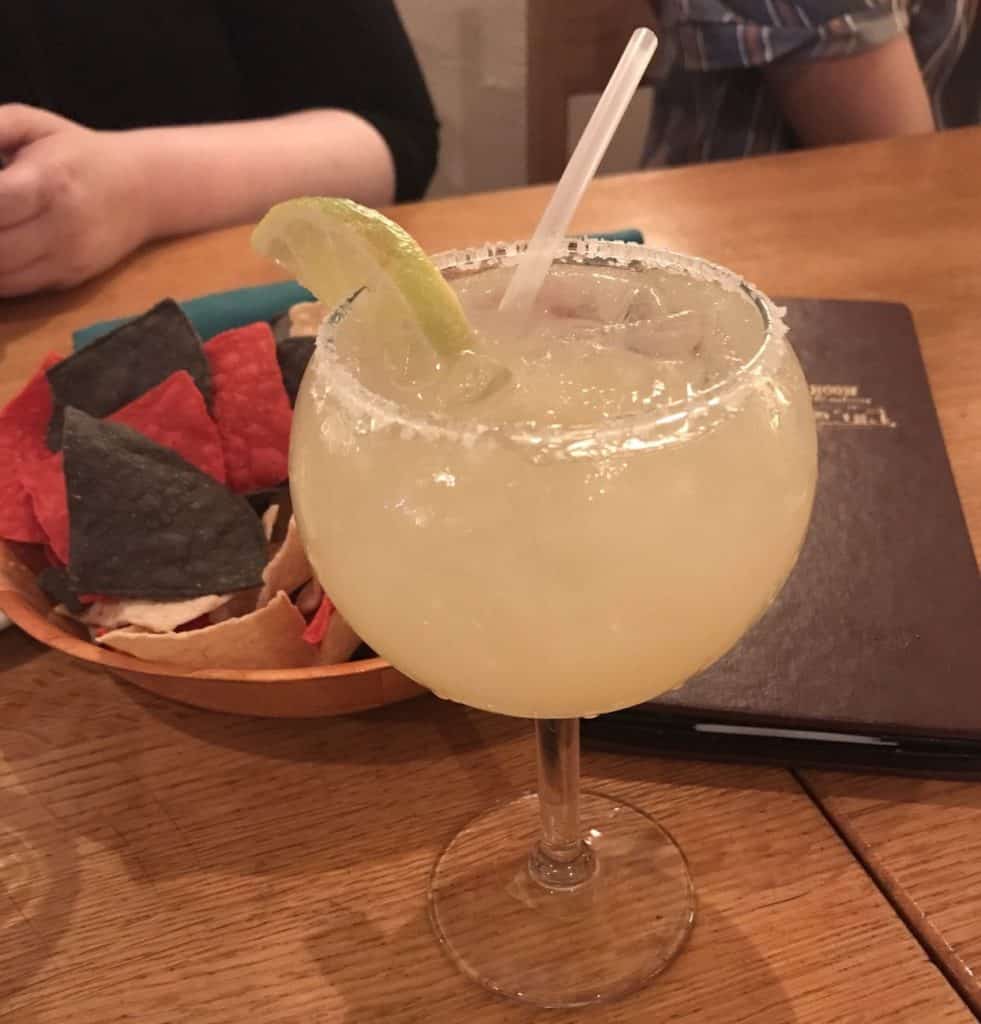 High Noon Saloon – When you are in the Old Town area sightseeing and shopping, enjoy a margarita at the High Noon Saloon. The chips and salsa are complimentary. While you sip on your margarita have one of the staff members tell you about their building, it’s supposedly haunted!

The beer scene in Albuquerque is excellent. And it’s only going to get better since the city re-zoned their downtown in order to support more beer making efforts. Albuquerque is now home to more than 13 breweries, including the wildly popular Marble Brewing Company. 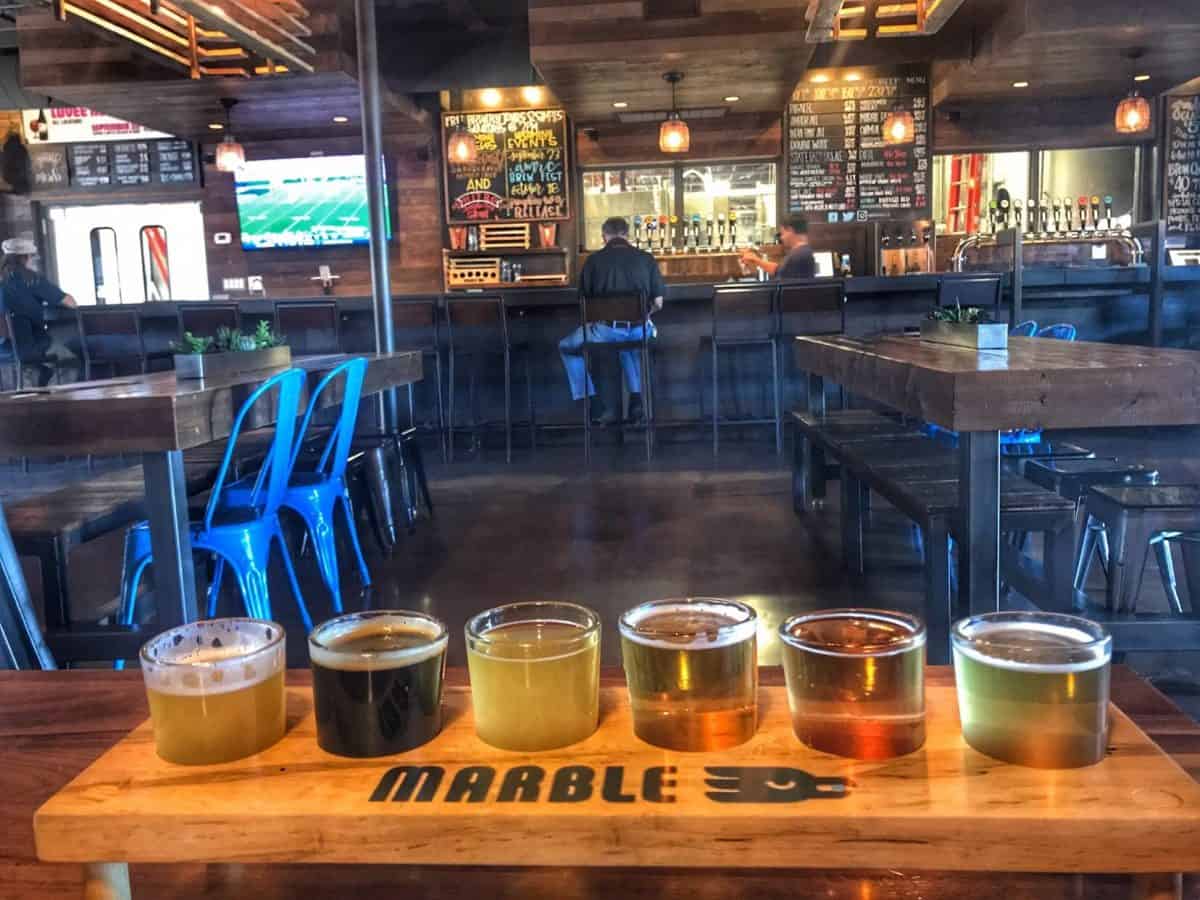 I highly recommend stopping in at Marble Brewing and trying a Pilsner, it has a nice citrus twang to it. Other breweries worth checking out include Nexxus Brewery and Restaurant and La Cumbre Brewing Company. 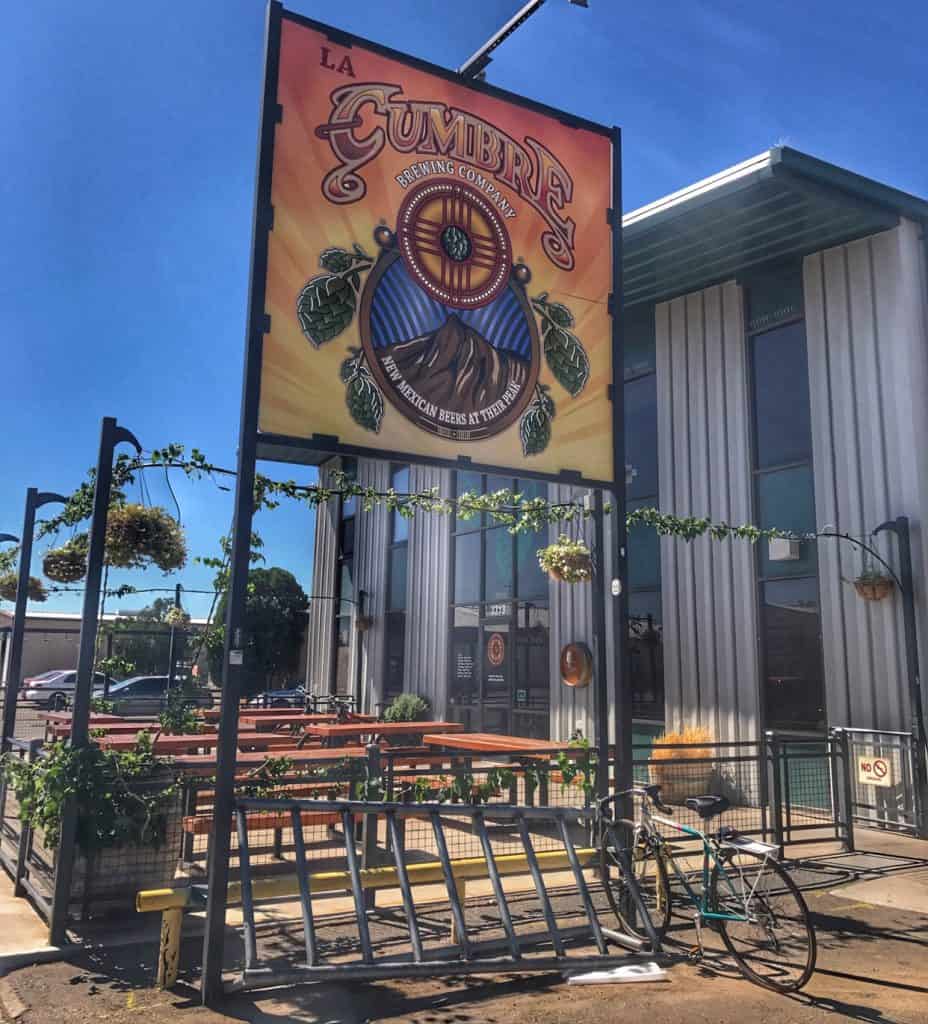 Things to do in Albuquerque 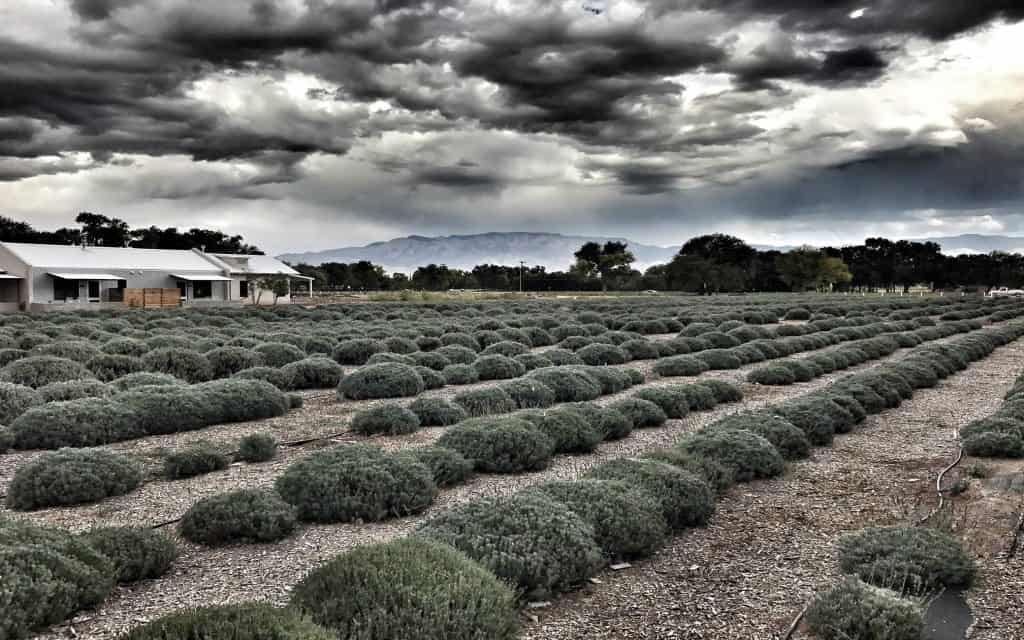 Albuquerque has one of the most charming lavender farms I’ve ever seen, Los Poblanos Historic Inn and Organic Farm. The farm is gorgeous and smells like heaven. You can stroll around the property, have lunch at their field to fork restaurant, and shop in their gift shop. 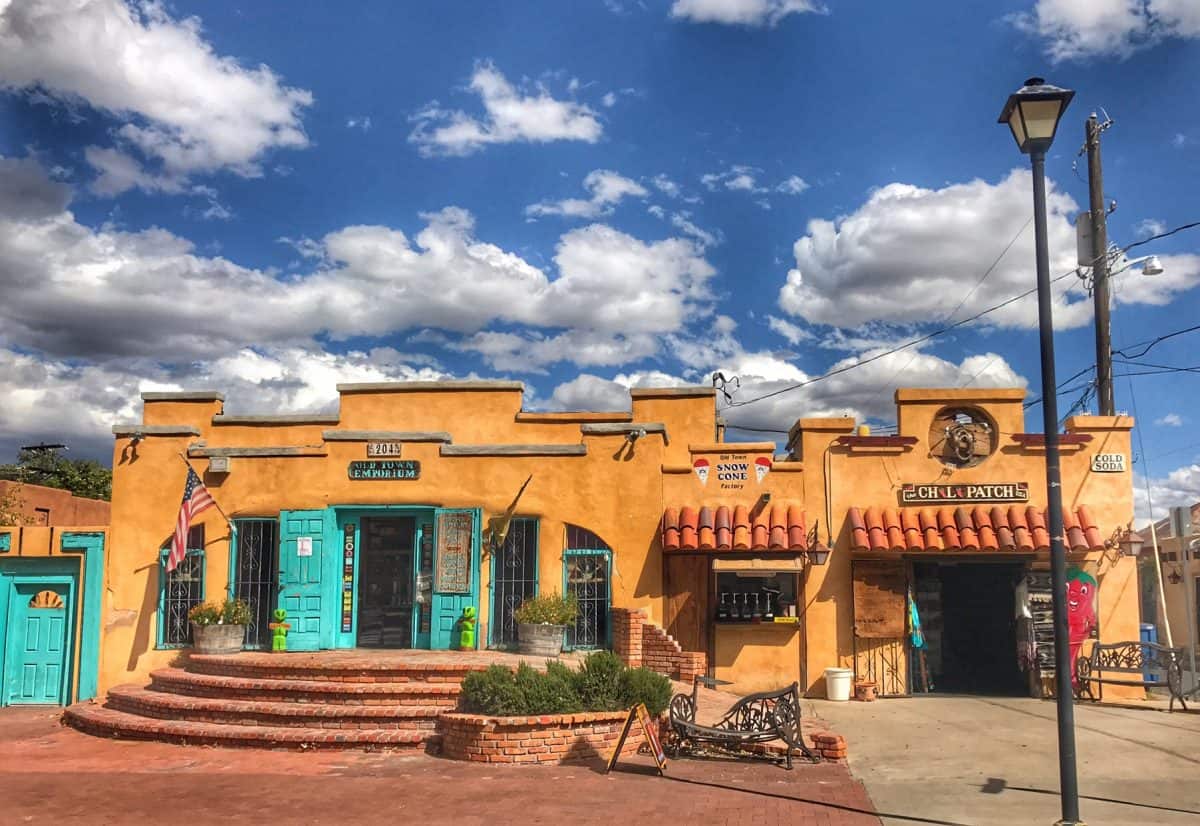 Old Town, founded in 1706, is so cool. Many of the buildings are well preserved, colorful Pueblo-Spanish style adobes. Just walking around the area is fun. There’s an old church, the 18th century church San Felipe de Neri, you can visit if there’s not a wedding happening. There are lots of places to shop and even individuals selling odds and ends on the sidewalk.

Albuquerque is the place to find one of kind turquoise jewelry! 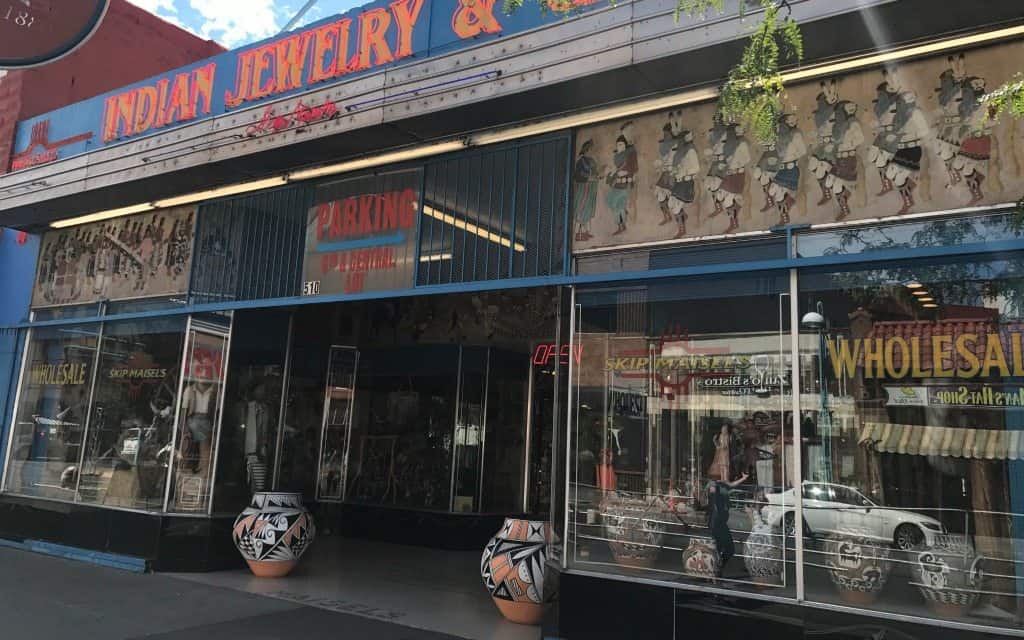 Shopping for turquoise at Skip Maisel’s Indian Jewelry store in downtown is a must. Skip Maisel’s has affordable prices and can tell you about the Indian artist that create each piece. I get constant compliments on my turquoise ring and this is where I got it.

Old Town Farm is located 1/2 mile west of Old Town Albuquerque. The property is about 12 acres and has been in agricultural use for over 400 years. This is a great spot to bike over to during the warmer months and stop in for a cup of coffee.

The park like area behind our house features a gazebo, waterfall and small stream/pond. There is also a fountain in this area and outdoor seating for their coffee customers.

Albuquerque has 600+ miles of bike trails in and around their city. There are lots of places to rent bicycles. Two trails worth checking out the Bosque Trail and the I-40 multi-use trail.

You can essentially gold year round in Albuquerque. With more than 10 courses available, there’s always one open.

The Sandia Tramway will take you to top where depending on the season you can mountain bike, hike, ski, or snowboard.

Explora is a children’s museum full of hands on activities like water exploration, arts and crafts, bubble play and so much more.

Oddly enough Albuquerque has quite a few escape rooms. I do not know if one is better than another. The kids and I have done this a few times and so far it’s always been fun.

Petroglyph National Monument is one of the largest Petroglyph sites in North America, featuring designs and symbols carved on volcanic rocks by Native Americans and Spanish settlers 400 to 700 years ago.

Here you can find  bumper cars, laser tag, paintball, and an arcade.

Breaking Bad was filmed in Albuquerque and there are some tours available to take you around to see locations where it was filmed. This is a must do for a hardcore fan.

Gravity Park is an indoor trampoline park. I always like to have something just in case it rains. 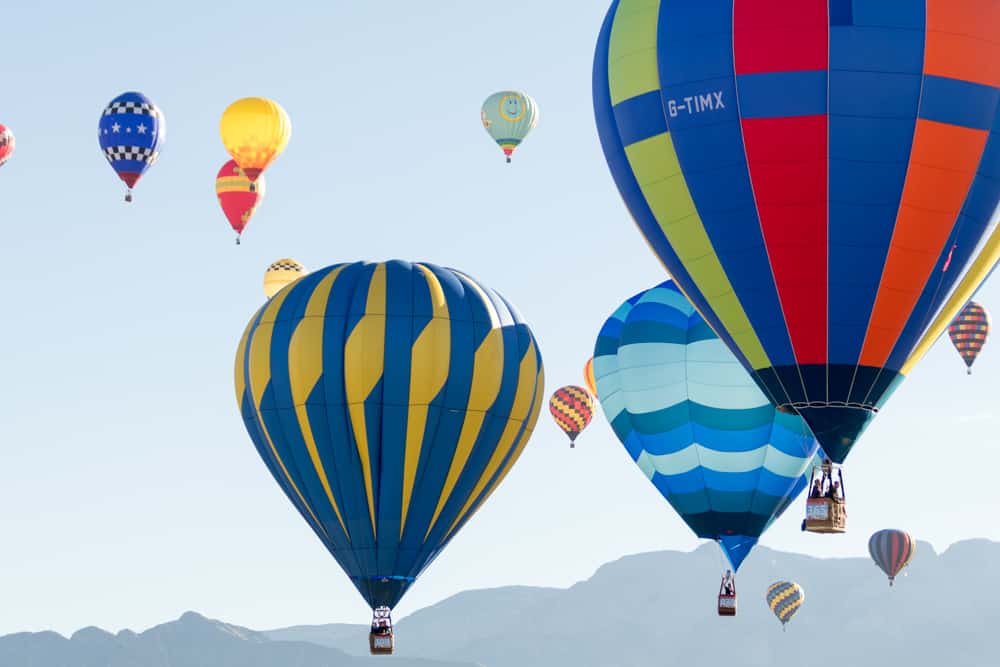 Albuquerque International Balloon Fiesta is the premier international ballooning event, powered by the perfect October climate. The 360 acre Park with 100 acres of grass and booths will be filled with balloons and concessions selling everything from traditional New Mexican food to balloon memorabilia. Every year balloon teams from around the world participate in the event. It has become one of the most photographed event in the world. 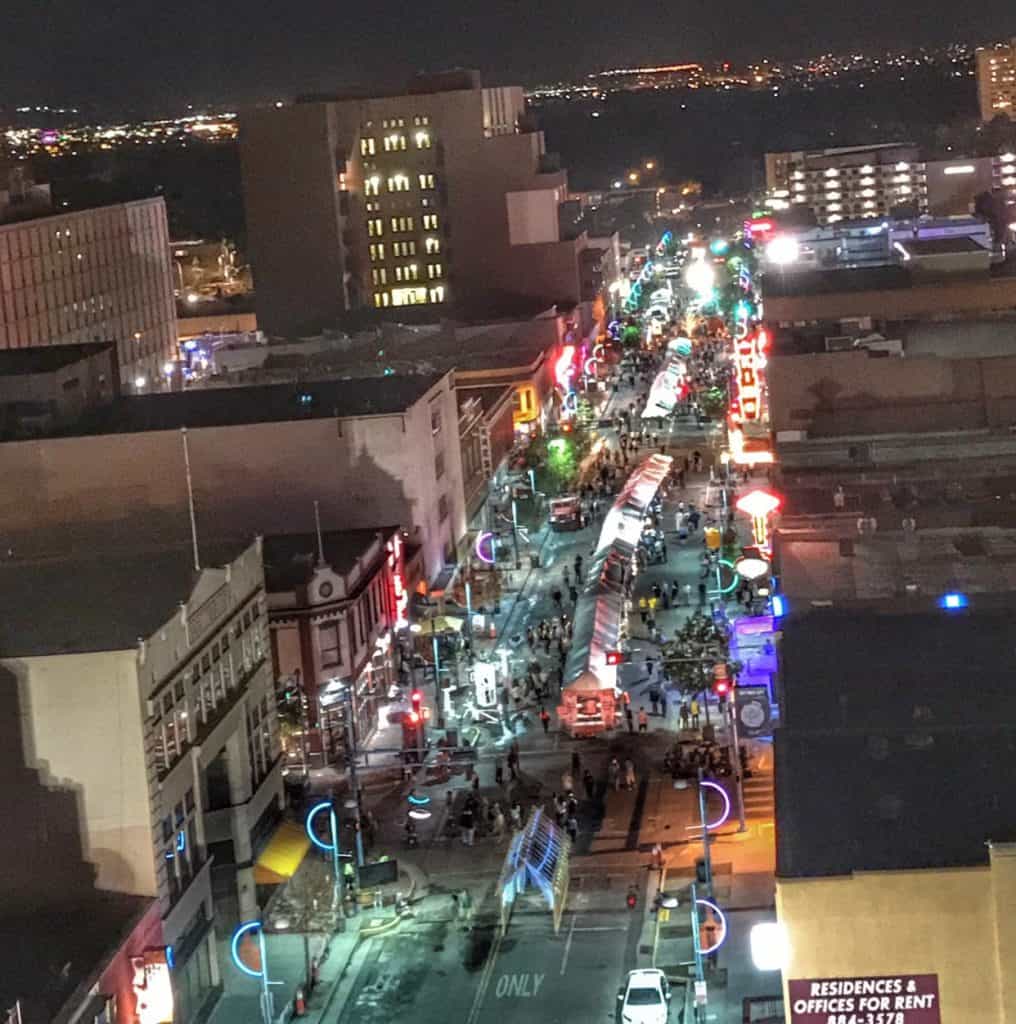 Globalquerque! is New Mexico’s Annual Celebration of World Music and Culture. It is held each September in Albuquerque at the NHCC. The event features bands from all over the world. They also have craft booths with local goods for sale. Plus, there’s wine and beer from New Mexico.

Where to Stay in Albuquerque

Like everything else in Albuquerque there are a wide variety of hotels. You have lots of well known chains as well as one of a kind boutique hotels. 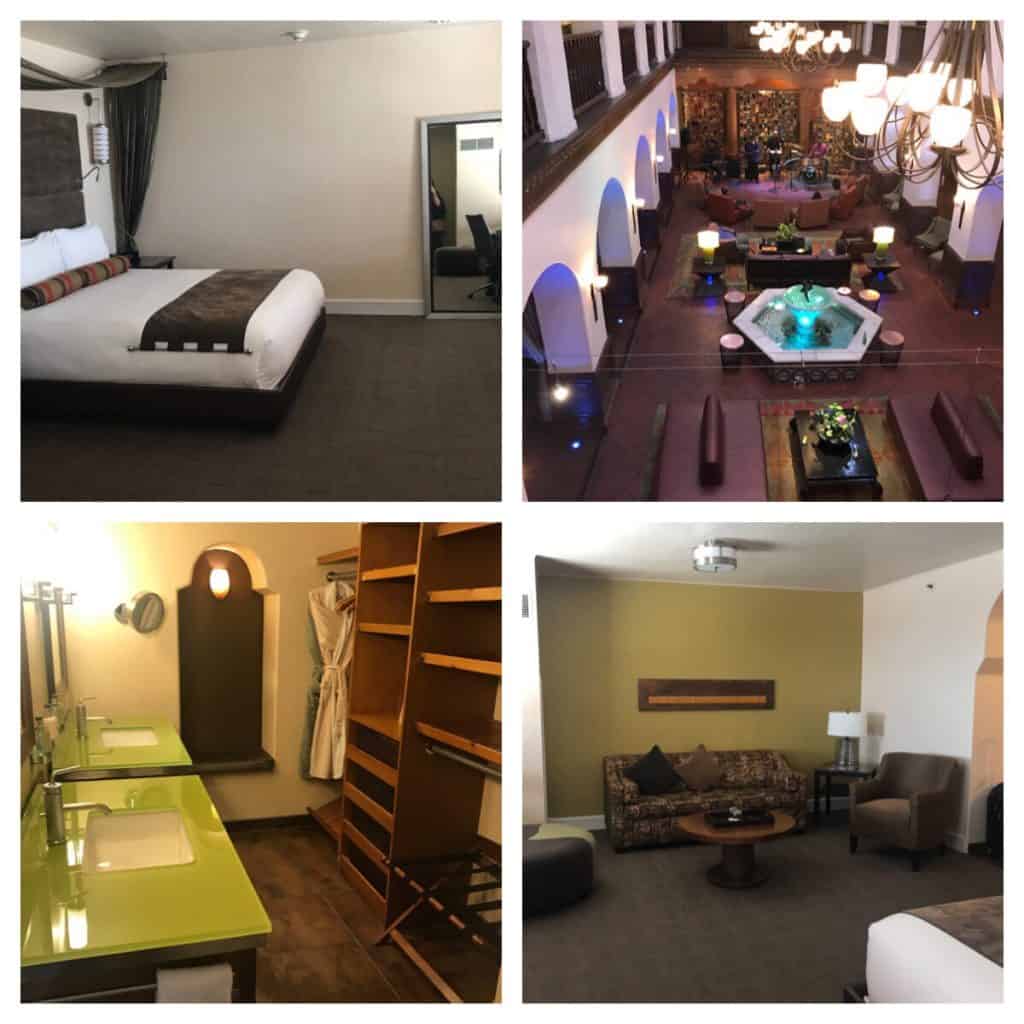 Hotel Andaluz is a boutique located in downtown Albuquerque. The hotel is adorable and the rooms are huge. There’s an on-site restaurant and a nice rooftop bar. Every night I was there they had live music in the lobby. The lobby has a cool vibe and worth hanging out in. I so enjoyed staying here and it’s so easy to recommend staying here, because they did everything right. 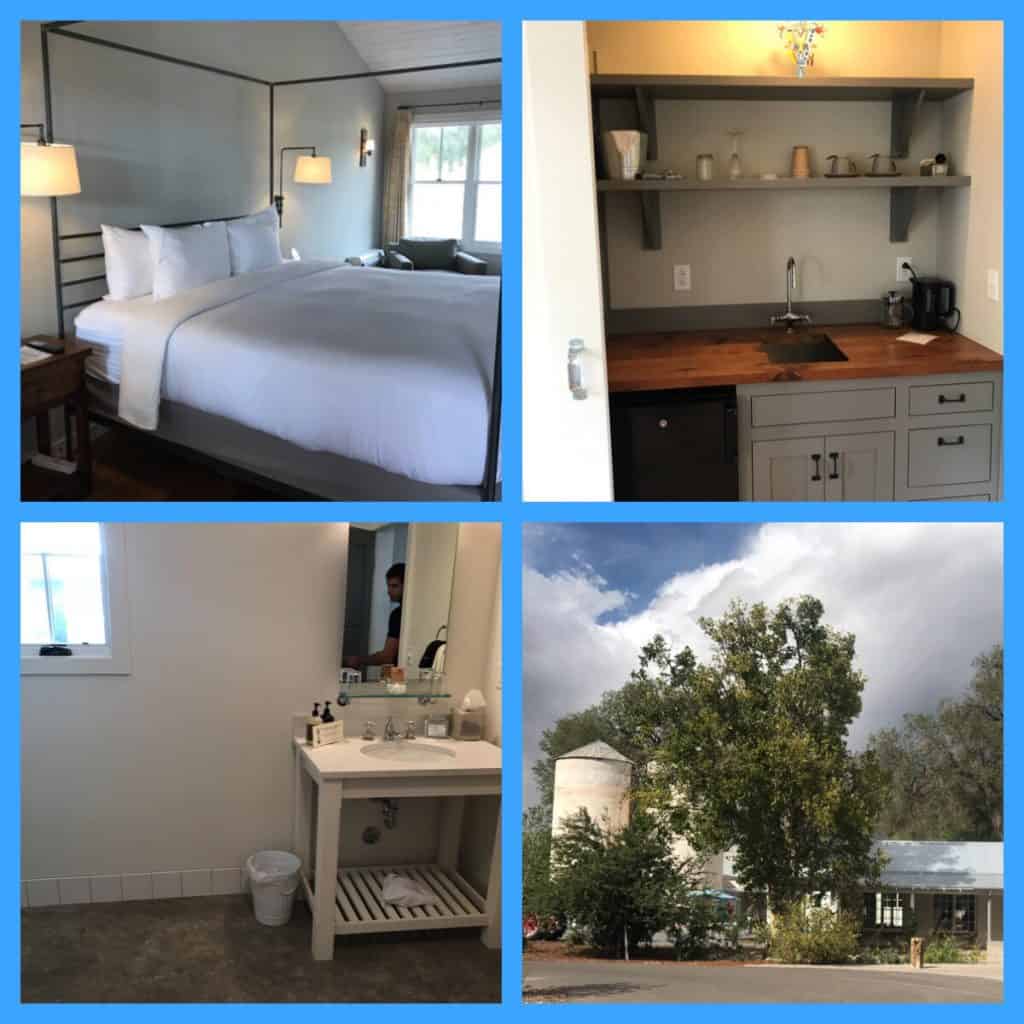 The Los Poblanos Historic Inn is adorable. I love the property and the inn is right there in the middle of the action. I definitely recommend staying here if you get the opportunity to. I am unsure if they have rooms that would accommodate families.

The kids and I ended up almost staying at the Residence Inn Albuquerque Airport, but they were sold out and I shouldn’t have been able to make a reservation. They sent us next door to the Courtyard and covered our stay. From what I saw, it was a nice hotel and they treated us extremely well despite the circumstances.

Our room at the Courtyard Albuquerque Airport was nice and spacious enough for a family of four. This was the hotel we got sent to after the place we booked was full. I was a little worried, but the worry was unfounded. 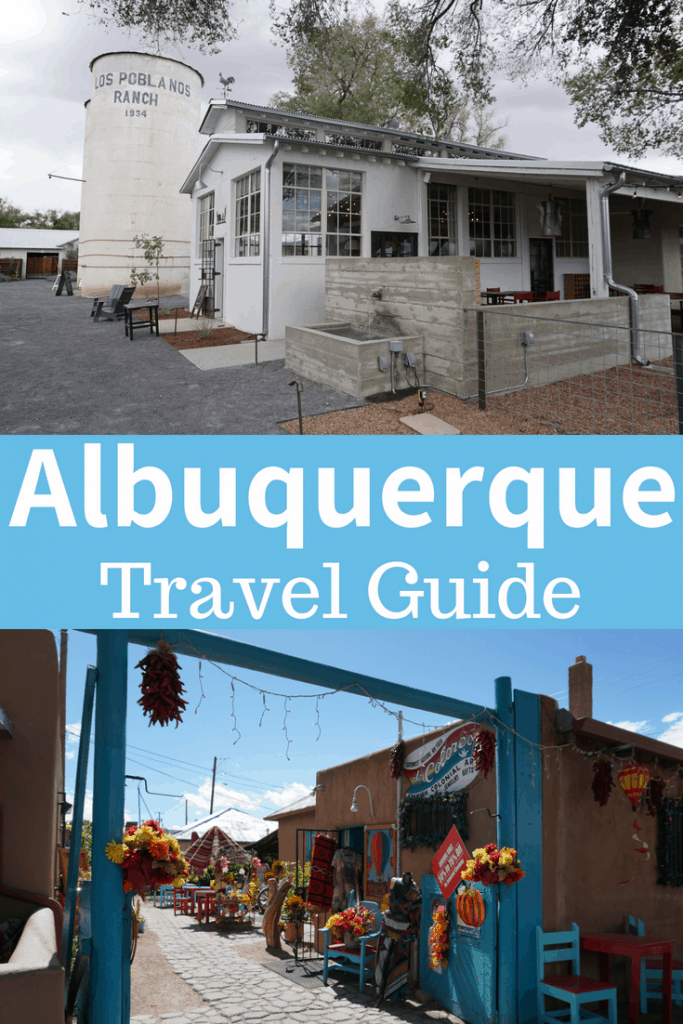 Have you been to Albuquerque? What was your favorite thing to do or place to hang out? Leave your suggestion/advice in the comments below!