The musical American in Paris is a love story that takes place in a post-WWII era highlighting many of the struggles they faced. 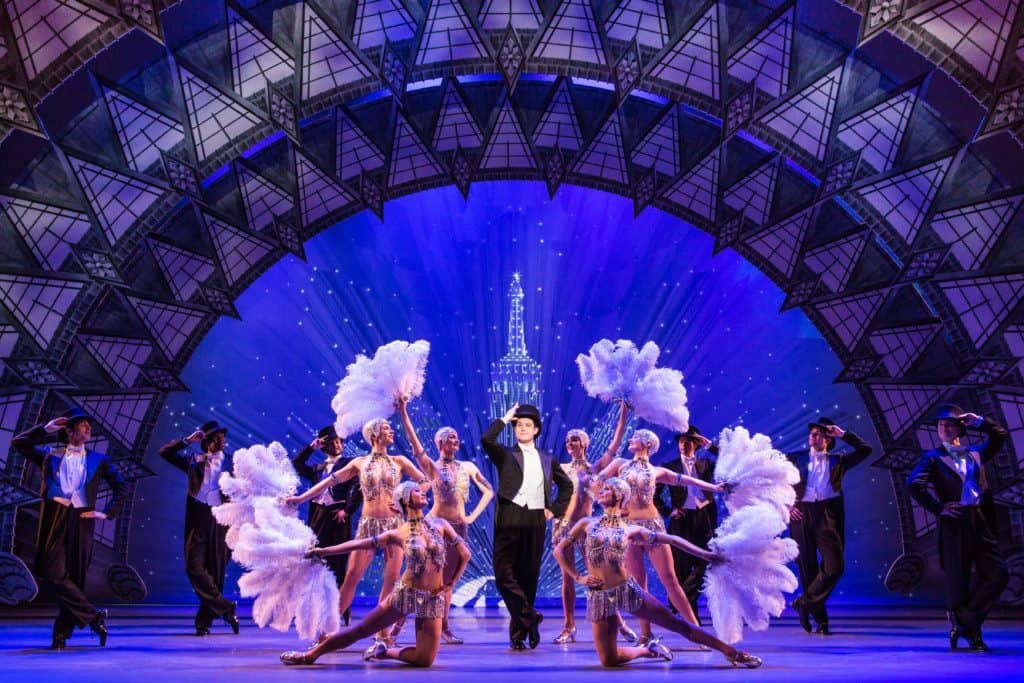 An American in Paris

As I sit down to see An American in Paris for the first time at Keller Auditorium in Portland, Oregon I am struck by the simplicity of the stage. The show has not yet started, but on stage sits a simple piano, a baby grand I think, kind of beaten up or at least looking well used. The backdrop is the looming shadow of the Arc de Triomphe, so that there can be no doubt that we are in Paris.  Already you feel drawn into a different time period, a feeling that only gets stronger as Etai Benson enters the stage.  Playing Adam Hochberg, an American soldier having fought in World War II, we can see that Adam has been injured in the war as he limps on stage with a cigarette in hand and narrates the scene that begins the musical.

An American in Paris begins in the mid-1940s. World War II is over, but France is still reeling from the devastation it left both physically and emotionally. We are shown this mostly through dance as the stage is first filled with dancing serviceman exuberantly celebrating that war is over. The choreography is breathtaking and emotional as the dancers fill the stage. Pieces of the stage, then glide effortlessly about as if they are dancing themselves, and the scene changes to a new location and atmosphere. We see another part of Paris and a line at a bakery where hungry women are waiting for bread, one is turned away. The moving walls glide through again and we are transported to another Parisian location where girlfriends and wives wait anxiously for their loved ones to return from war. Brilliantly Christopher Wheeldon, the Director, has made us feel the excitement, celebration, poverty, fear, anxiety, and relief all through dance and costume.

It is then that we meet Jerry Mulligan, an American serviceman, with a passion for art. He is moved by all he sees in Paris and has decided not to return to the US. Jerry stumbles across a café and we see Adam, sitting at the piano.  He is a frustrated composer. A friendship is struck up immediately as both are ex-serviceman and both have decided to remain in Paris, one a composer and one an artist.

We are then quickly introduced to the third of the main male characters, Henri Baurel, played by Christopher M. Howard.  Henri is a wannabe cabaret performer from a wealthy family who is living a lie (perhaps even more than one). He is expected to take over the family’s very successful fabric industry, but in his heart, he is a performer and not a very good one. Adam is teaching Henri to sing and dance. Adam is a little depressed, sarcastic, and negative. He tries to get Henri to sing a song that is slow and heavy, but with Jerry and Henri’s help it is sped up and becomes “I got rhythm”. All three men sing together and they sound fantastic. They are joined on stage by dancers in everyday clothes from that time period and things begin to look up for the three friends. The feeling is of hopefulness and a brighter future.

Suddenly the lights go out, and we are reminded that we are still in postwar France, electricity cannot be taken for granted. However, rather comically a stationary bicycle is brought on stage and Jerry jumps on to create the power to generate the electricity for the show to go on. The resilience of the people of that era is highlighted.

Interspersed with previous scenes we have seen Jerry and Adam have chance encounters with a mysterious and very quiet Parisian girl. Leigh-Ann Esty plays Lise Dassin beautifully. Her dancing is nothing short of enchanting as she auditions to be a ballerina in a dance production. Adam is the piano player in this audition and he and Lise exchange a few words. Jerry has chance meetings with Lise several times within the first four scenes of the musical and professes his love for her with the fourth number “I’ve got beginner’s luck”. The scene is in a department store.  This is the place of Lise’s day job, the set is totally convincing and does a brilliant job of drawing the audience in.  McGee Maddox, who plays Jerry Mulligan is fantastic as he sings and dances around the stage like Gene Kelly and the whole auditorium can feel the romance and nostalgia of a bygone era.

Milo Davenport is a wealthy American woman who shows an interest in Jerry and his artwork, she is also financing a dance production and is willing to give Jerry opportunities and exposure to the art world that he would not otherwise have.

At this point, one of the few things we have learned about Christopher M. Howard’s character, Henri, is that he is trying to propose to his girlfriend but something is holding him back. Homosexuality is implied several times but never spoken. He is clearly from a family in which keeping up appearances is very important.  In a scene at Henri’s ostentatious family home, we discover that Lise Dassin is the girl that Henri wishes to propose to as well as the ballerina in Milo Davenport’s production and the girl that Jerry is in love with. Adam, the composer, has quietly implied his own infatuation. Therefore, we have all three main male characters, in their own very different ways, in love with Lise. There is a sense that Lise is in love with Jerry but something is holding her back too. She has an inexplicable debt or obligation to Henri, whom she seems to love out of duty, not passion, and because of this she accepts his proposal of marriage.

It is impossible not to mention the use of picture frames as part of the set in Henri’s family home. They are dramatic and show the wealthy side of Paris, but also the way the dancers play and dance with them so fluidly is really something to watch. That performance is then topped by the whole dance troupe’s skill and dexterity as they perform “fidgety feet”. Maddox lets his feet do all the talking and the rest join in and dance with their chairs as if the chairs themselves are an addition of their own bodies. They make it look so easy, it’s impressive.

Jerry despairs at the thought of Lise marrying Henri and in his bad mood, he fights with his, sort of girlfriend/sponsor Davenport. Jerry feels that he must confess that he is not in love with her and cannot go on with the façade of being interested in her for the sole purpose of promoting his art. Milo Davenport is hurt but continues on supporting the dance company and Jerry Mulligan’s art and inspiration.

We then find out why Lise feels indebted to Henri. Henri’s family, the Baurels, were not in fact superficial, wealthy elitists as we are being led to believe, up until now, but rather part of the French resistance. They fought tirelessly during the war to undermine the German occupation and hid Lise when her Jewish parents were taken away, never to be seen again.

Lise feels indebted to the Baurels and considers it her duty to marry Henri. There is clearly no spark between them, the way they dance together is cordial, not electric. Lise expresses her concern that she will not be able to dance the performance sponsored by Davenport well because she doesn’t feel it in her heart. She then dances impeccably during the dance within the musical because she is thinking of her real love, Jerry. The creation of the dance within the musical allows the director to use some extravagant costumes. The back of the stage becomes the front as we see dancers with feathered headdresses and costumes and more dancers in top hat and tails dance and tap and ultimately take their bows to the other audience. The show within the show is a success. Henri lets Lise go to Jerry and the true love finally pulls the whole thing together. 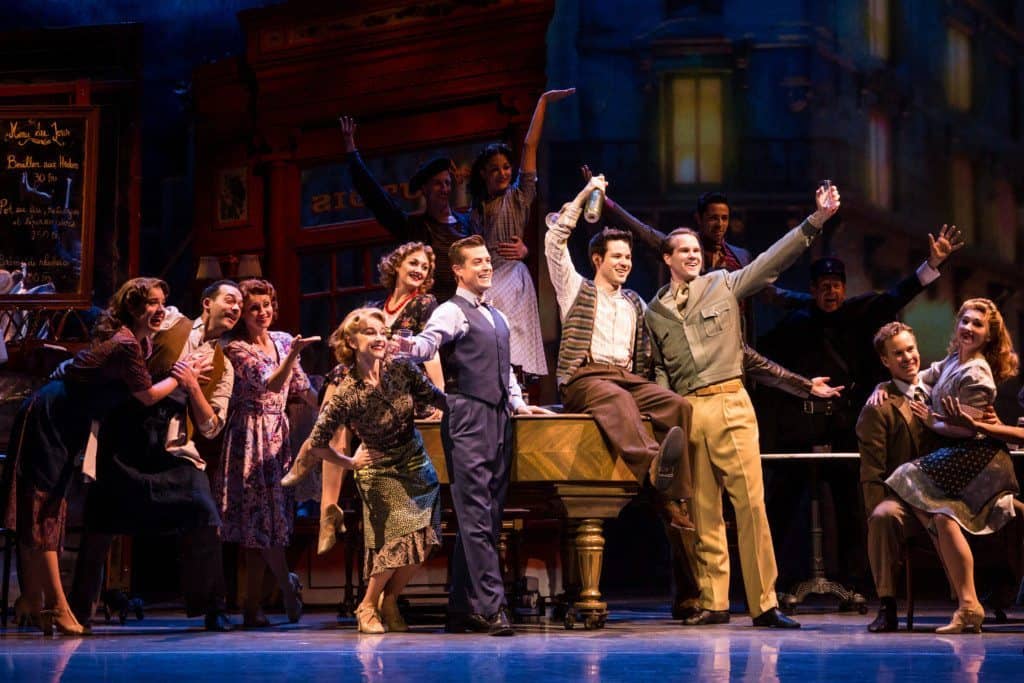 What a spectacular show!  Full of color and music and dance I thoroughly enjoyed it.

Have you seen An American in Paris? What did you think?

An American in Paris is playing now at KELLER AUDITORIUM 222 SW Clay
Portland, OR 97201.