Barry Manilow – Las Vegas (how to get a free ticket!)

Barry Manilow – Las Vegas (how to get a free ticket!)

My step mom wanted to go see Barry Manilow‘s show at the Paris casino in Las Vegas and my dad refused to go with her. So, I took her last night. I wasn’t sure what to expect since most of his hits were before I was born. I was pleasantly surprised. It was a good concert and I did recognize some of the songs.  The concert lasted an hour and a half.  He sang all of his big hits, plus several songs of his Christmas Cd’s.

At one point he spoke to the audience about his foundation, Manilow Music Project.  I had never heard of this, but thought it was such a great idea to help the struggling music programs all over this country.  I was in band and I think it was such a vital part of my school years.  He has info on how you can donate an old instrument to a school program.  He mentioned at the concert that if you contact them and donate an instrument they will give you a free ticket to see his show.  They also collect funds to do other things like what they did here in Las Vegas donating $500,000 worth of instruments to the schools here.  (I can speak first hand since my kids are stuck going to school here until we get stationed somewhere else.  The schools are drowning! The Vegas schools need as much help as they can get.)

Here are pictures I got at the show. 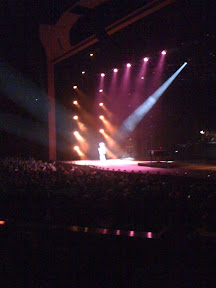 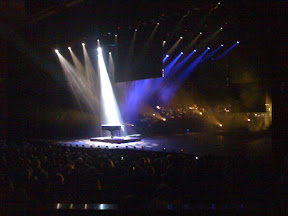