From the best New York City pizza (arguably the world’s best) to New York City restaurants with TV ties to bagels that you’ll still be dreaming of weeks later, there’s no shortages of good food in the city that never sleeps!

On this whistlestop tour through the best places to eat in New York City, you’ll learn exactly where to spend your hard earned money on New York’s best culinary creations and local cooking.

Work up an appetite walking around the city and getting involved in the hustle and bustle and then check out the best restaurants in New York City to satisfy those cravings. 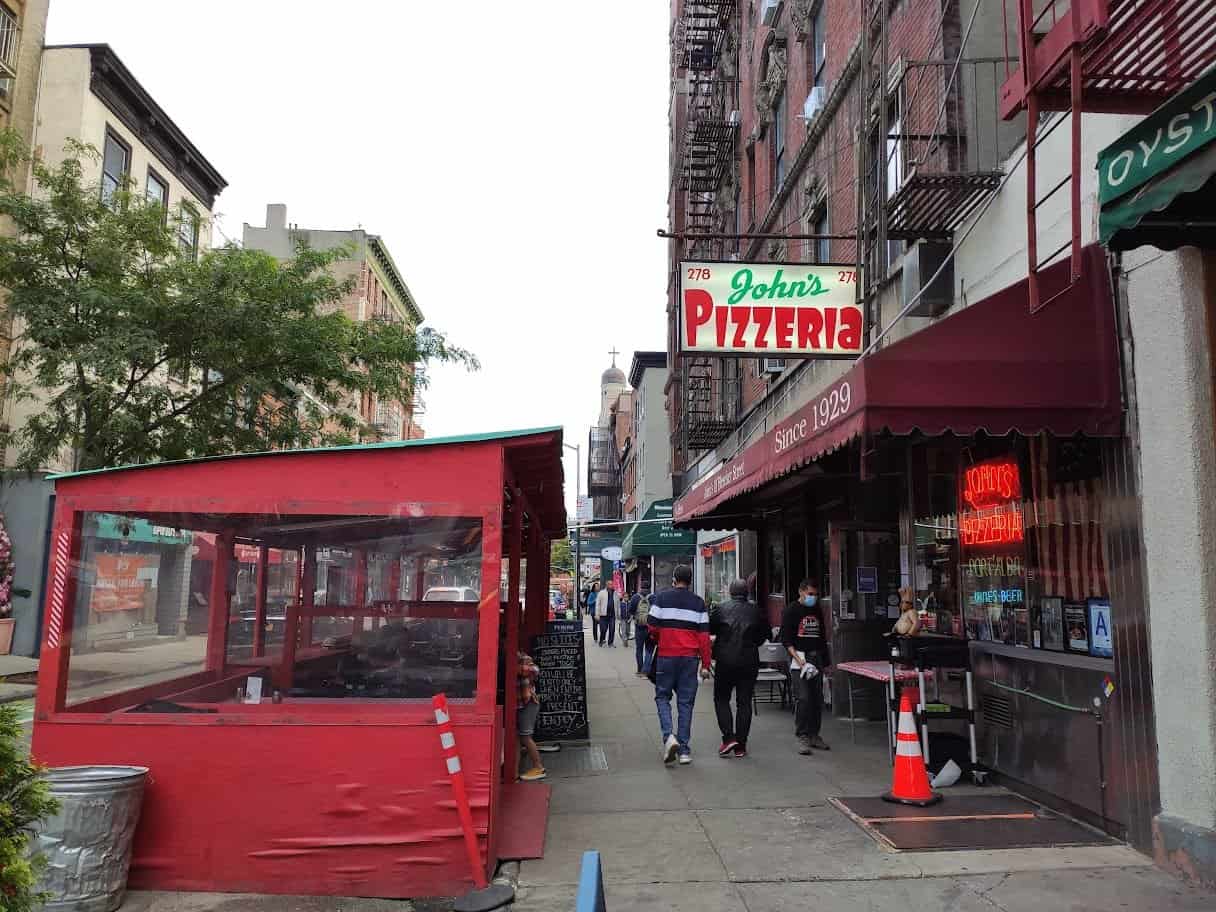 The #1 pizza in all of New York City is a point of contention among locals and visitors, but our pick for the best pizza is John’s Pizza (fun New York fact: New York pizza is characterized by its thin base that’s still soft enough to fold!)

John’s of Bleecker Street was founded in 1929 by a man named John Sasso and today they serve up hundreds of coal-fired brick oven pizzas every single day.

They say the secret’s in the sauce, but whatever the secret is, they won’t reveal it: you’ll have to head to John’s yourself to order your favorite (we recommend the “Sasso” which has pecorino romano, oregano, and black pepper baked into the pizza).

There’s usually a line here with no reservations allowed, but it’s well worth it. 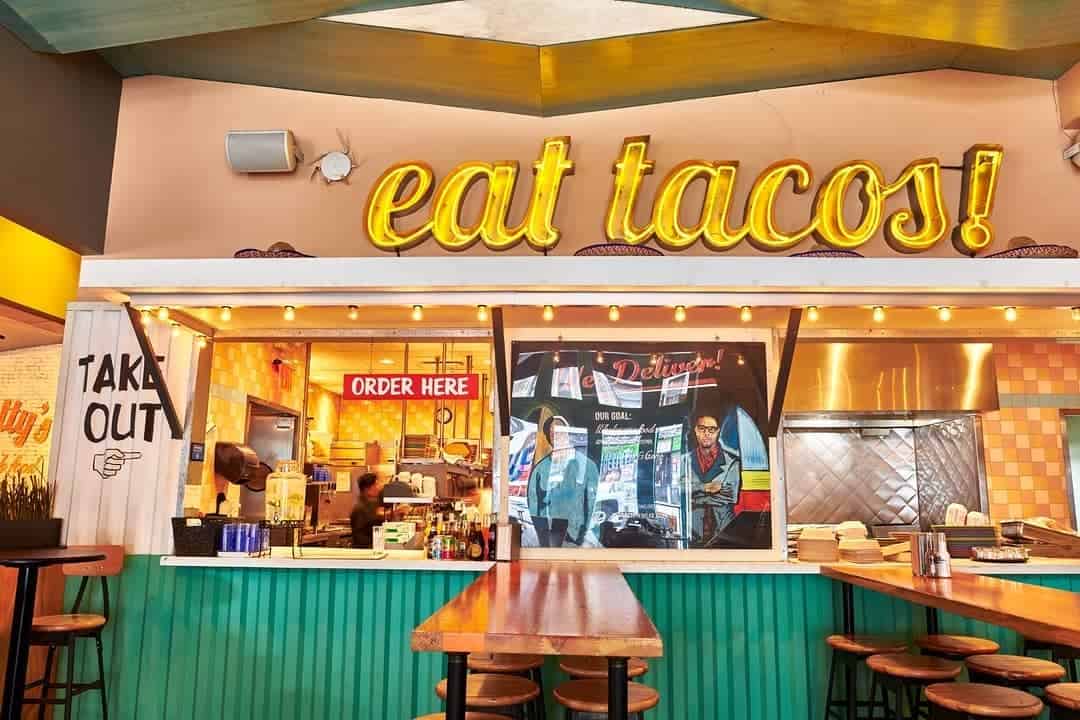 California fare might not be the first thing on your mind when you head to New York City, but there is nothing better than some Mexican and Californian grub on a winter day in the city as the restaurant is decorated in vibrant colors with lots of natural light and beachy vibes.

You’ll find it on the Upper West Side, and while the guacamole is a must-try classic, it’s really the “Hang 10 Burrito” with chopped steak, jack cheese, and sour cream that’s the star of the show.

Ever heard of the show “Cake Boss?” Carlos, the owner of the original Carlos Bakery in New Jersey, expanded into NYC and offers up some of the best cake you’ll find in Manhattan.

There are a few different locations, but whichever one you choose, you can’t go wrong with the giant slices of the vanilla funfetti cake, the red velvet cake, or the Oreo cake.

They all sell other sweet treats like donuts and cookies, so if you’re looking for an after dinner dessert in NYC (or if dessert is the dinner, we won’t judge), then this is one of the best places to eat in NYC.

You can simply order at the counter and then take your cake to go as there isn’t a sit-in area, so this is one of the best things to do in New York City alone as well if you just want to eat some cake and chill in the park.

Tavern on the Green 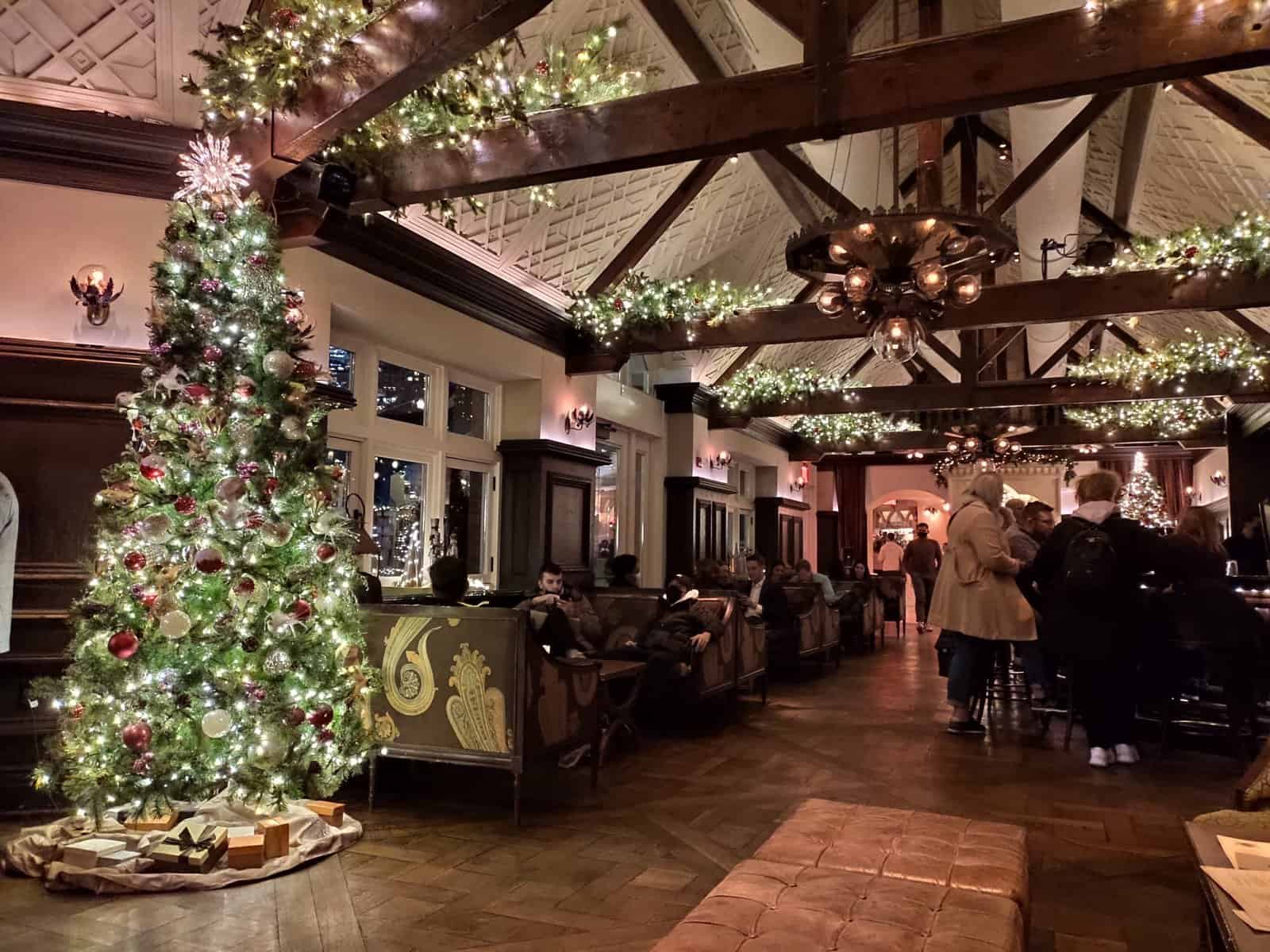 Located in Central Park, Tavern on the Green is an upscale restaurant that almost has an iconic status among visitors and locals alike.

As soon as you step inside, you’ll love the sophisticated lounge with warm colors and comfy sofas, but the real treat comes in the dining room that looks out to the main courtyard.

The food is absolutely incredible (and worth the price tag for the experience), but if you really want to maximize your visit here, make sure to come during Christmas time when the gorgeous Christmas tree and other decorations truly transform it into a Winter Wonderland.

Another Central Park restaurant, Loeb Boathouse is a fine dining establishment (though it also offers a casual take-out area) with stunning views over the lake.

You can watch people boating on the lake in the summer months while enjoying everything from skillet chicken to porkchops to cauliflower steaks for the veggies.

The service is attentive and friendly and when you’re finished you can get some pictures out by the lake and see if you can spot the turtles and fish swimming around.

You’ve got to get a bagel while in New York, and Gourmet Bagel is the absolute best place for breakfast in the city if you want a classic New York bagel.

It’s on Lexington Avenue, so very centrally located, and they’ve got everything from cranberry bagels to cinnamon raisin bagels to pumpernickel bagels and every single spread you can possibly think of.

Make it even more interesting and order a bagel sandwich with freshly cooked egg, cheese, and bacon. 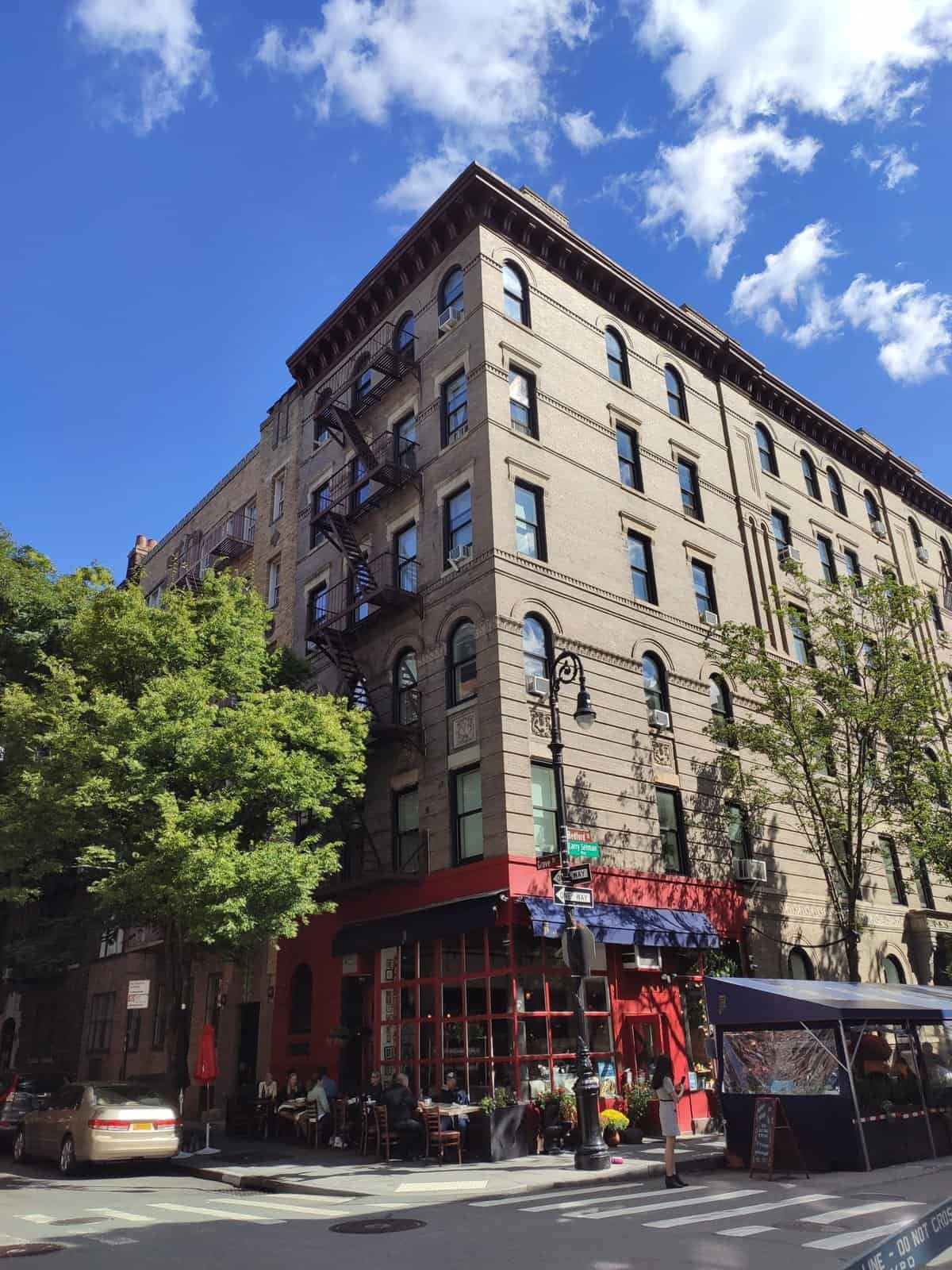 If you’re familiar with the hit TV show “FRIENDS,” then you’ll be a big fan of the Little Owl.

While the restaurant itself isn’t related to the show, it’s got a fantastic menu featuring delicious meats, pastas, and veggie dishes and the location can’t be beat if you’re going to be FRIENDS location scouting.

There’s also an outdoor dining option if the weather is good and you want to eat in the sunshine and fresh air.

In the heart of Chelsea, Cookshop is one of those restaurants that both locals and visitors love. Serving farm fresh food all day long, you can stop by whenever works best for you, but the brunch is definitely the star of the show.

Dig into the cooksho peg sandwich with fontina, onion jam, and chile, or have enough cinnamon buns to keep you full all day long.

The Huevos Rancheros are a great Mexican inspired option, while the Scramble helps you keep it simple if you just want some perfectly cooked eggs on toast with some extra elevation. 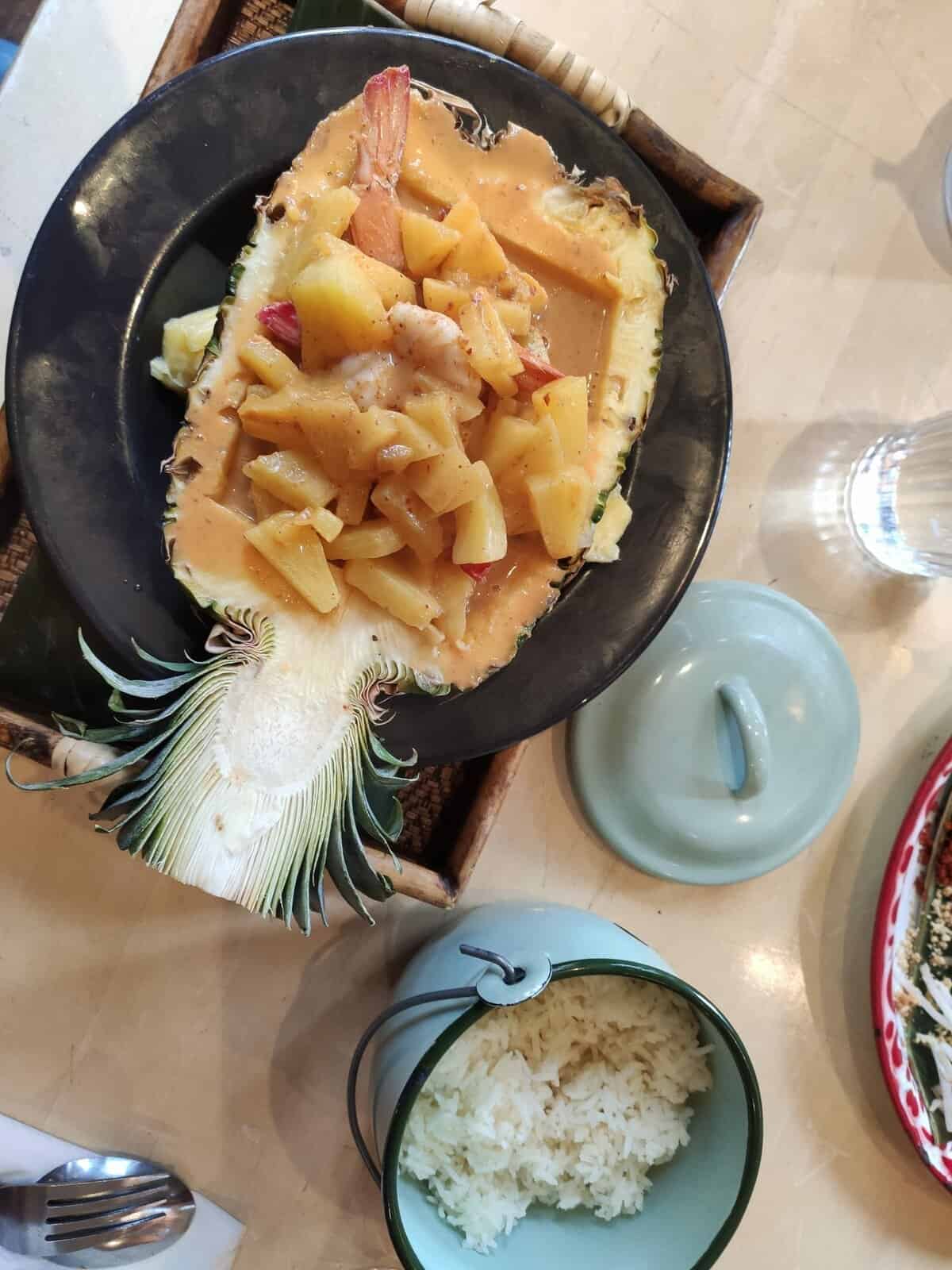 Venture over to Carroll Gardens in Brooklyn for an authentic Thai restaurant that offers both dine-in and take-out.

The dine-in area is relatively small and intimate, which makes it a great experience when visiting with friends so you can actually hear each other instead of battling the sounds of a busy restaurant.

The Pad Thai is a must-try, and of course the authentic Thai curries are developed with the freshest ingredients and with the love of a family-owned restaurant.

This French-American restaurant is a fascinating take on both cuisines, and the West Village location makes it a popular place for celebrity spotting.

Try the French Onion Soup as an appetizer, and then move on to the Cluny Burger on a brioche bun.

The Lobster Rolls are also incredible, and the vegetarians in the group have plenty of options including Macaroni & Cheese, purple sticky rice bowls, and even a grilled cheese with gruyere.

The Smith has four locations across NYC: Nomad, Lincoln Square, Midtown, and the East Village.

It’s a popular gathering place for friends, coworkers, and families who want American cuisine in a funky and sophisticated environment.

It’s also a great place to eat in NYC if you’ve got a variety of tastes in your group, as you can get everything from oyster platters to roasted salmon to vegetable bibimbap to pot pie.

Steaks, mac & cheese, and large salads with marinated shrimp or grilled chicken are also popular options, and the smashed potato side will have the whole table talking.

16 FREE Things to Do in NYC

The Most Instagrammable Food in NYC