Best Things to do in The Netherlands

Best Things to do in The Netherlands

Welcome to beautiful Holland, which is also the Netherlands, by the way. You have heard about the tulips, windmills, and cheeses, but this leading European destination also has modern skyscrapers, picturesque mountains, lush forests, and pristine beaches.

There is no lack of Instagram-perfect landmarks here and so many popular tourist spots, such as the Van Gogh Museum, the National Museum, Madame Tussaud Wax Museum, etc. Dutch cities are modern and ancient and fun and educational at the same time. There are so many reasons to come and here are the best things to do in the Netherlands. 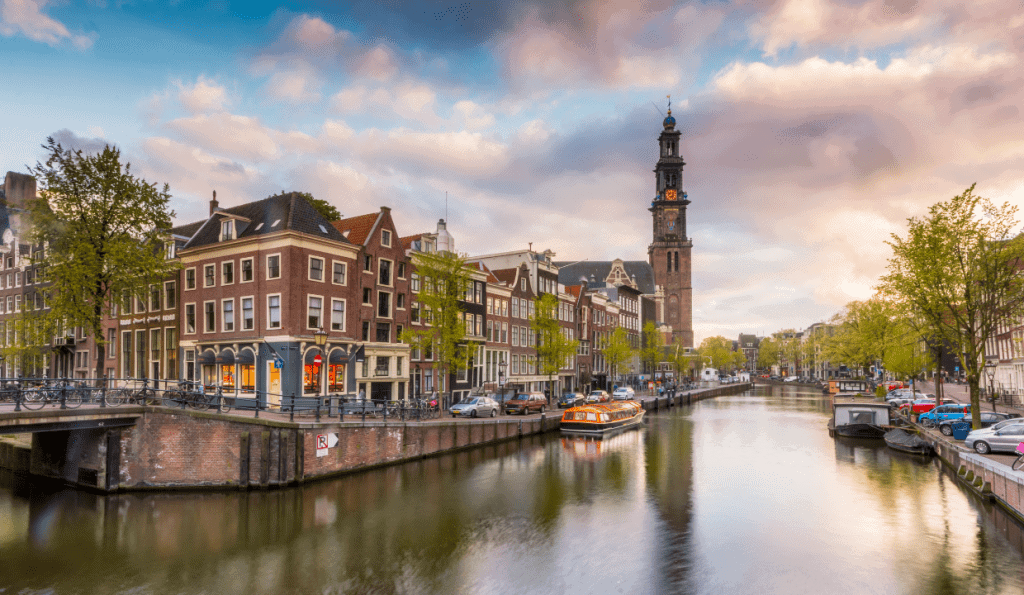 The topmost beautiful thing you should do in the Netherlands is to enjoy a relaxing ride on Amsterdam’s world-famous canals. The man-made network of canals is unbelievably picture-perfect, especially after sundown when fairy lights light up the bridges. A lovely boat ride is simply magical.

Amsterdam’s waterways were created in the 17th century to keep the sea at bay. Today, this UNESCO-protected landmark has a more touristic function, although it still does manage the flow of water into the city.

There is no better way to experience Holland’s capital sights and sounds than floating along the canals by guided boat tour. You can learn a lot about the city from the guides, who are only too eager to tell you more about Amsterdam. Make your way through the ins and outs of the city, and discover the many museums, shops, boutiques, cafés and restaurants along the canals.

Booking a canal boat tour is not difficult to do. There are several cruise companies near Centraal Station, and you can even get a free ferry ride. Hotels and events also normally offer a variety of boat rides. You can get a hop-on-hop-off sightseeing tour, a pedal boat for two, or a candlelit nighttime cruise with food and wine. 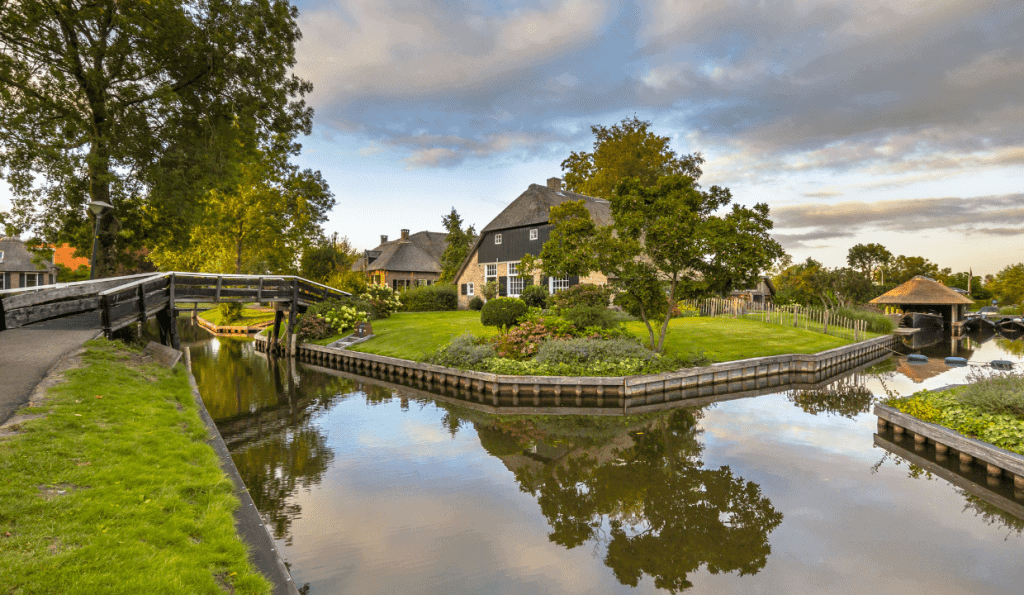 Your canal experience doesn’t have to end in the capital. There is a lovely little town up north that is known for its magical canals and enchanting neighborhood. Visit the quaint village of Giethoorn in the province of Overijssel, just two hours away by train and bus. It is one of the up-and-coming attractions in the Netherlands, as people continue to talk about the village’s extremely blissful ambiance.

Giethoorn is often referred to as the “Venice of the Netherlands” for a good reason. As you cruise along the village canals, you will see thatch-roof homes, lovely wooden bridges, and traditional farmhouses that contribute to the enchanting medieval atmosphere. You will also be delighted to know that there are no cars here in Giethoorn.

This green village has one main path or walking strip that will take you to the cafés, shops and restaurants along the canals. You definitely don’t need a car to enjoy this peaceful town. Even the boats here don’t have engines and those that do have engines are equipped with silent motors. 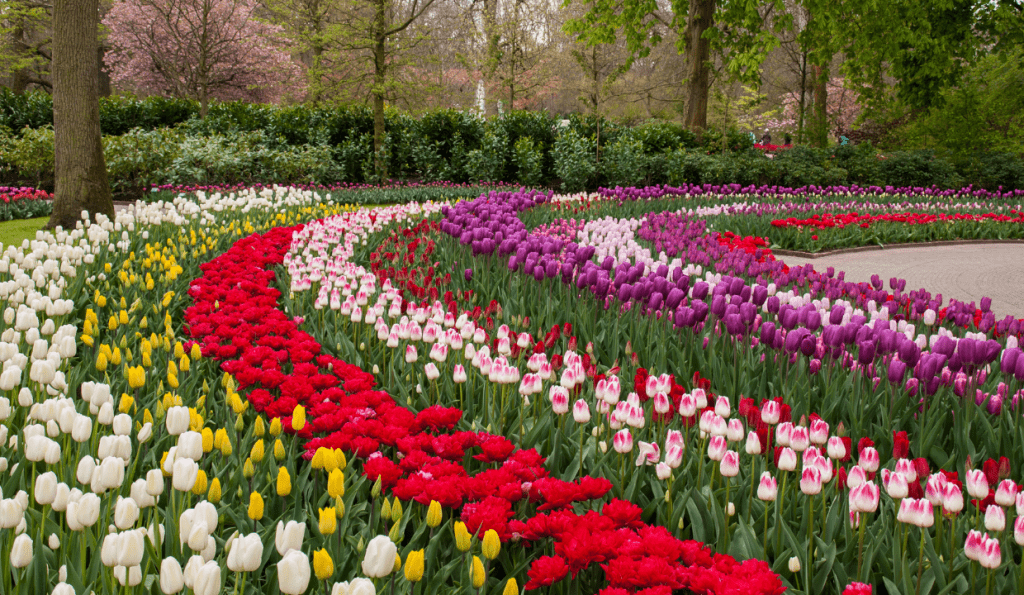 The tulip flower is one of the best representatives of the Netherlands. You shouldn’t miss their heavenly scent and tantalizing colors as they come to full bloom in the spring. The country’s most popular flower market is in Amsterdam on the Singel canal. It is called Bloemenmarkt and here you can purchase and marvel at the beautiful flowers from mini-greenhouses.

To see the biggest display of millions and millions of bulbs, however, you have got to travel to Keukenhof. Located in Lisse, not far from the capital, Keukenhof is the world’s largest and most famous flower park. People refer to it as the Garden of Europe, and millions of visitors come here yearly in spring.

Keukenhof is composed of several gardens that grow not just tulips but also roses, daffodils, hyacinths, orchids, lilies, and many others. Keukenhof is open from mid-March to mid-May when the tulips are in bloom. 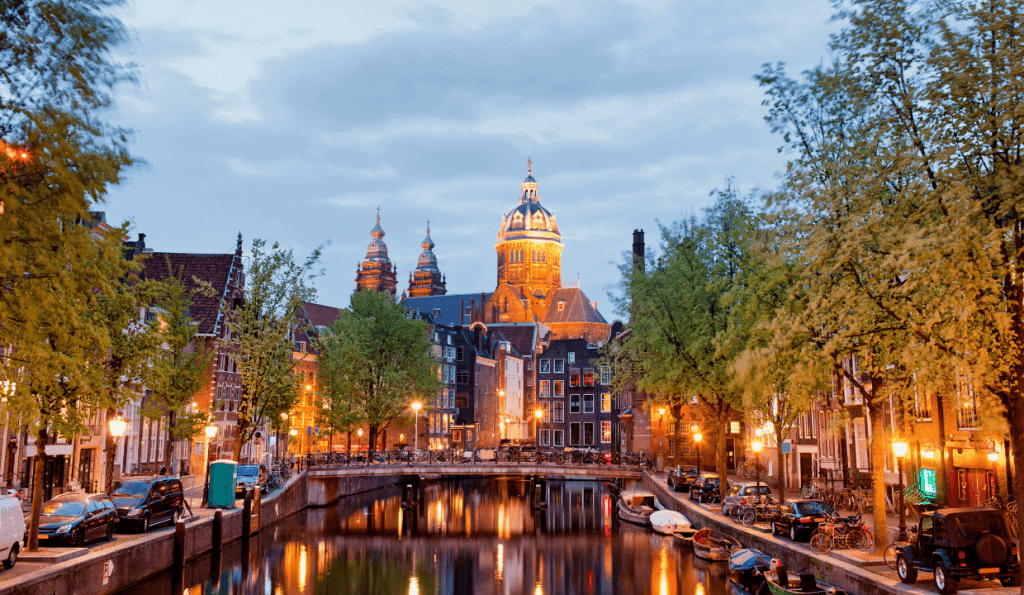 Come and walk these streets to see rows and rows of sex shops, brothels, peep shows, and similarly focused museums for a truly funky and unique experience. You may not have had this district in mind coming to Holland, but a night stroll in De Wallen could make you better understand and appreciate the openness and uniqueness of Amsterdam.

The Red Light District could easily be the liveliest and wildest part of the country in the evenings, but during the daytime, the neon lights and buzzing atmosphere disappear and the neighborhood becomes normal. You wouldn’t mistake De Wallen as a red-light district during the day, although there might still be some women knocking on windows.

Another “sinful” pastime in the Netherlands is a casual dose of marijuana that is legally sold in several coffee shops. If you want coffee, go to a café or restaurant, but if you want to smoke pot or buy Grade-A cannabis, you go to a coffee shop. You can easily purchase some legal marijuana, joints, and edibles in Amsterdam and take them home with you (as long as your home country allows you to bring them in).

If this is your thing, take time to visit these coffee shops – Grey Area on Oude Leliestraat, Coffeeshop Solo just outside the tourist area on Korte Koningsstraat, and 420 Cafe on Oudebrugsteeg. Try 420 Cafe’s popular Space Cake.

A trip back in time: 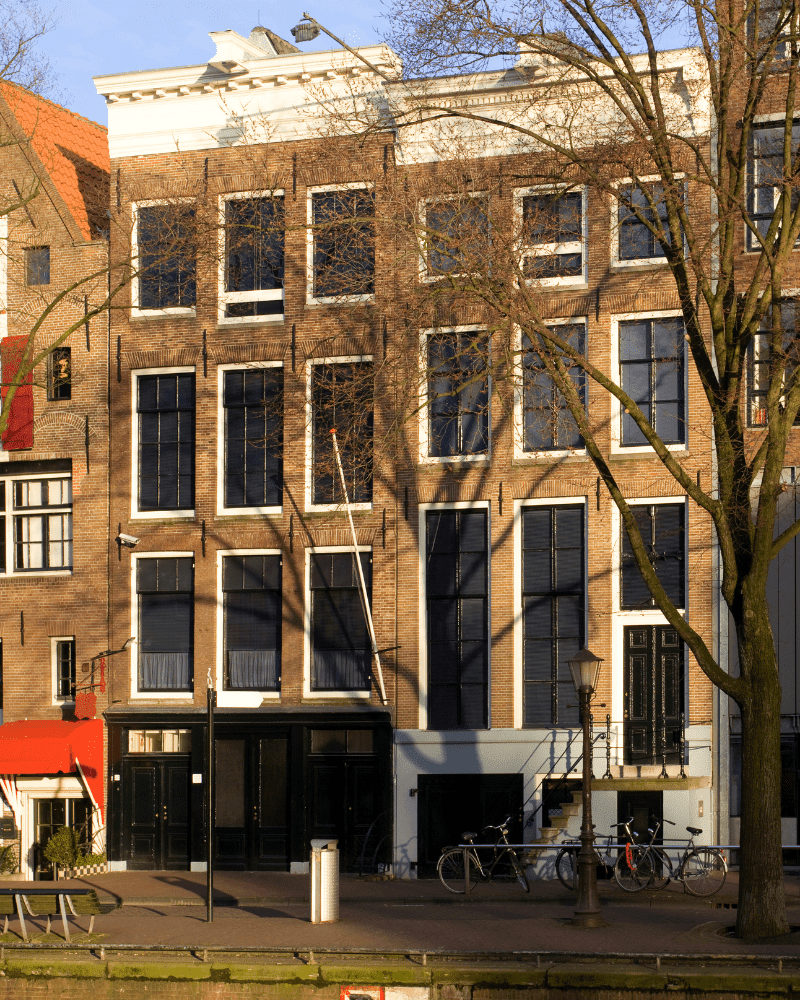 If you know your history, you might have heard about a little diary written by a brave young lady while hiding from the advancing Nazis. This is Anne Frank’s diary, and the home where she and her family hid during the war has been converted into a museum in Amsterdam. Anne’s remarkable diary has since been translated into 51 languages.

The Anne Frank House in the Jordaan Neighbourhood is clearly one of the most important and poignant destinations in the Netherlands, if not the whole of Europe. It is a thought-provoking and soul-searching place that could take you back to the times when the world was struggling in war.

The house has been fully restored and kept in its original state. You will see photos, videos, and original artifacts, including Anne’s two other notebooks – “Favourite Quotes Book” (Anne’s collection of her favorite quotes) and “Tales Book” (containing Anne’s original short stories). This courageous 15-year-old hoped to be a famous writer and journalist.

Book in advance online, as this is the most sought-after historical place in the Netherlands. 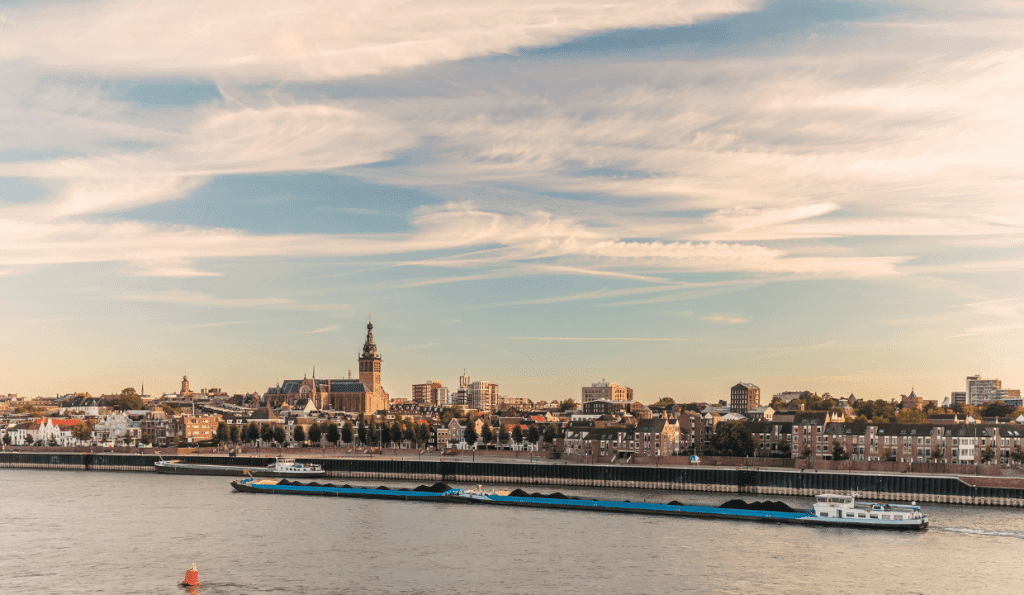 While the Netherlands is historical and nostalgic throughout, you should visit Holland’s oldest city that used to be part of the Roman Empire – the historic city of Nijmegen near the German border. Come here to see several reminders of the Roman days of bygone years.

Nijmegen is known for its museums. Museum Het Valkhof displays modern artworks, paintings from old masters and Roman antiquities, while the National Liberation Museum showcases artifacts from World War II to give you a better understanding of how the Netherlands was liberated.

You will definitely be transported back in time as you visit 15th-17th century structures, such as the Renaissance-style Burchtstraat city hall, Sint-Jacobskapel chapel, and the Tower of Belvédère. You can also find here Lange Hezelstraat, which is the oldest shopping street in the Netherlands. Any souvenir from this place will give you heaps of stories to tell people back home. 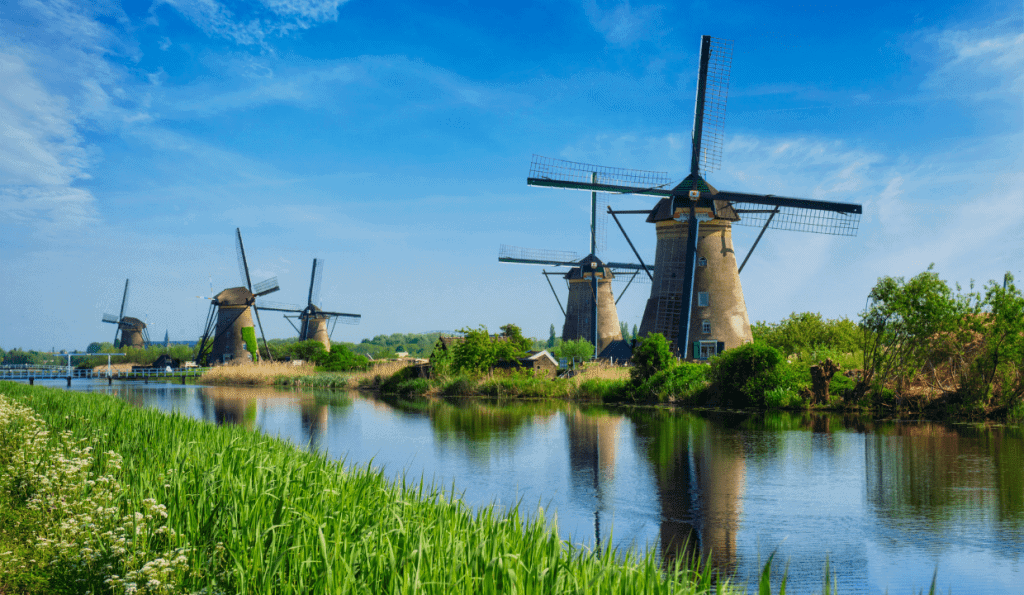 When you say Holland, people immediately picture in their mind tulips, wooden clogs, and beautiful old windmills. The oldest and most well-preserved windmills are nestled in Kinderdijk. There are 19 magnificent and gigantic windmills here, all of which were built between 1722 and 1761. They were constructed by the residents to prevent the entire province from flooding.

The UNESCO-protected windmills are compelling to look at and an effective extensive irrigation system that has remained standing for hundreds of years. Thanks to these gigantic man-made structures, the village of Kinderdijk has remained dry and above water.

In case you haven’t heard, over 15 million people fly to Holland each year. That’s 15 million reasons for you to come as well. There are more cities, tourist hot spots, and fun activities for you to discover that did not make the list above.

Come in spring when the flowers are in full bloom, in summer to catch numerous festivals and events, or winter to skate around as the country turns into a white winter wonderland. In other words, you can practically come any time of the year to have a grand time in the Netherlands.