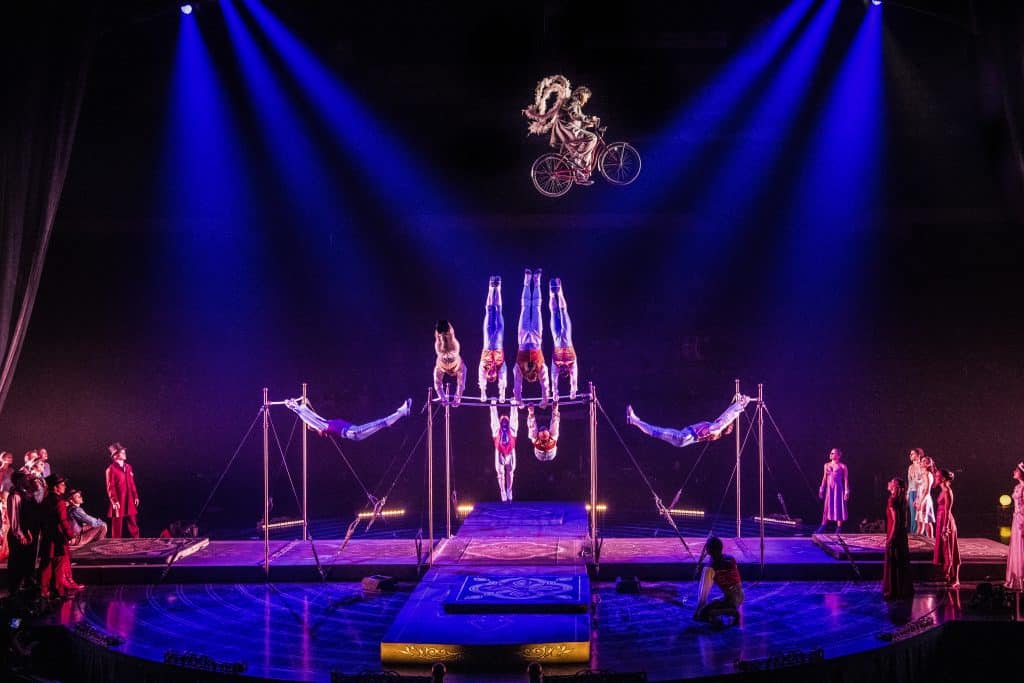 Corteo’s theme is a clown’s funeral procession and the primary language is Spanish. Now you can just imagine how insane a clown’s send off might be! After seeing it I can tell you that it’s weird and wonderful!

Here is the official description of the show:

Corteo, which means “cortege” in Italian, is a joyous procession, a festive parade imagined by a clown. The show brings together the passion of the actor with the grace and power of the acrobat to plunge the audience into a theatrical world of fun, comedy and spontaneity situated in a mysterious space between heaven and earth. 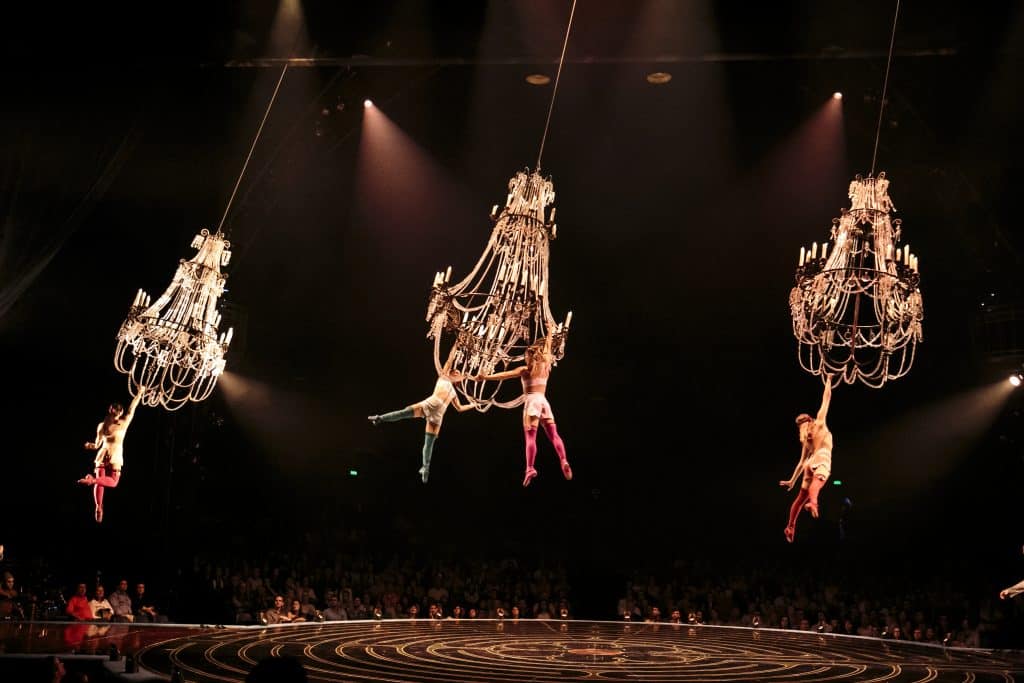 At the start of the show three women perform synchronized aerial acrobatics on three giant chandeliers. As it began I kind of wondered where this was going, for some reason seeing those chandeliers made me think about Phantom of the Opera. For a second I got a little worried for the overall tone, but the worry was needless. Although this is about a death, this is not a dark show in any way. The show is fun, festive, and kid friendly.

The kids and I agree that this show was a little weirder than the ones we’ve seen previously. Unless you’ve read up on the show you would never know what certain things is supposed to represent. For example, the three women on the chandeliers are the Dreamer Clown’s former loves.

However, there are times that seem to have no meaning at all, like the golf scene. A Giant Clown walks on stage, intent on giving it his best shot. Unfortunately for him the golf ball is a person’s head sticking up out of the bottom of the stage and the head keeps moving. This was super funny, yet so random.

Another oddity was the whistler. They have a whistler that can perform a song solely by singing. This was so bizarre and excellent at the same time. I kept thinking they are faking this, but I could visibly see and hear him whistling. Isn’t it always amazing what some are able to do. 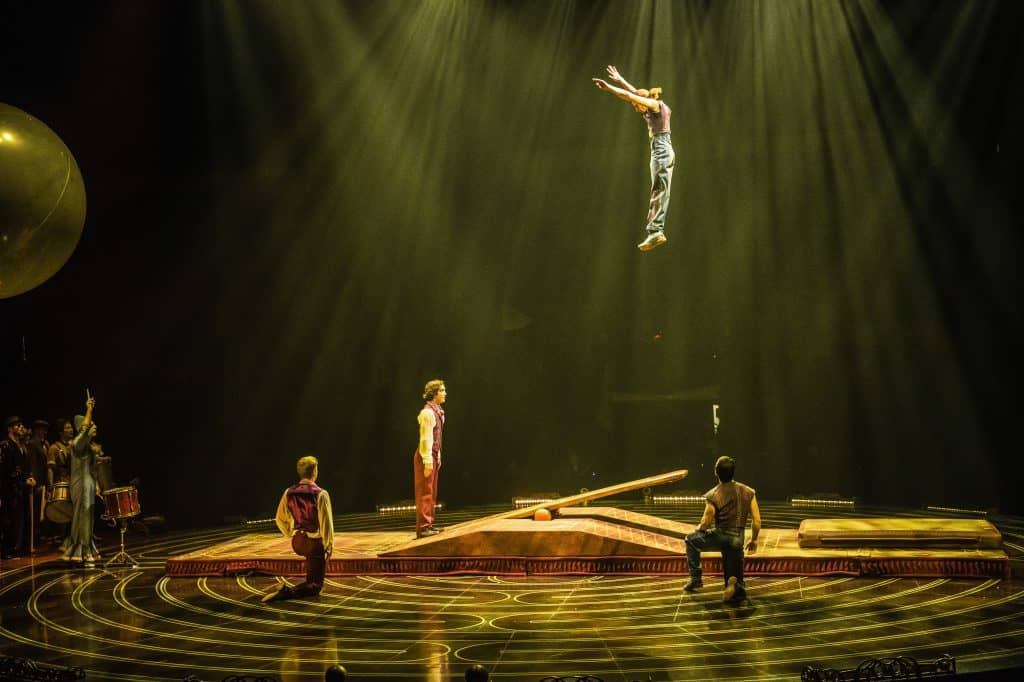 As always the talent found in their shows is epic and this holds true in Corteo. Here are a few of the act’s we enjoyed the most.

If you have never seen anyone perform in person on a Cyr wheel you are in for a treat. Not only does someone perform on one, five artists perform! Some do solos and some do group figures on Cyr wheels. It was all extremely impressive.

The artists cross paths in an act which marries horizontal bar techniques with circus arts. The complexity of the act defies gravity keeping you on the edge of your seat.

Noah was in gymnastics for 15 years, so I have seen first hand how hard these skills are to learn. Not only have they learned all these impressive skills, they’ve taken them to the next level.

In this mesmerizing act, a duet uses aerial straps to create a magical and tender connection that enchants with beautiful displays of agility, balance and strength.

This is one of those acts that can typically be found in any Cirque du Soleil, as it should, because it’s amazing to watch.

A ladder specialist amazes the audience with his unnerving balance and finesse as he performs on various ladders. I can’t even begin to explain on of the trick this guy did with the ladder. His act is one worth seeing in person.

Two groups of artists lend rhythm with their voices and percussion work while the acrobats redefine teeterboard technique where speed is rivalled by complexity.

What is a teeterboard you are now wondering. Well, think back to your childhood. When you were playing on the playground there was a seesaw. Imagine doing flips and tricks on that seesaw…….yes, that’s what they’ve done! (It’s pictured above.)

This a high-flying and bouncing act where guys toss girls back and forth through the air, while the girls perform flips.

This time the stage was set up quite differently. It reminded me a bit of Cirque du Soleil’s Beatles set up in Las Vegas. This one though isn’t scene from all sides, just two.

Set Designer Jean Rabasse has divided the Arena and its rotating stage in two, with each half of the audience facing the other half, so they see not only the performance, but also have a performer’s eye view of the audience. This is a first for Cirque du Soleil.

I enjoyed the set up. I felt like we had a great view and we were not seated center or down low. The way they have it set up, I assume everyone has a good view.

As a massive trombone fan, I must acknowledge what an outstanding job the trombonist throughout the show. All of the music in the show is excellent, but there was one song early in the show where the trombone was just as good if not better than the action on stage. They spread the musicians out to different parts of the stage, so sadly I never got a look at the trombone player. If I can find out more details I will update this!

CORTEO is currently performing at the Moda Center in Portland from now until March 17, 2019 with two shows a day! Some of the shows have already sold out, so do not delay purchasing tickets.

I found tickets for $52 on Living Social! 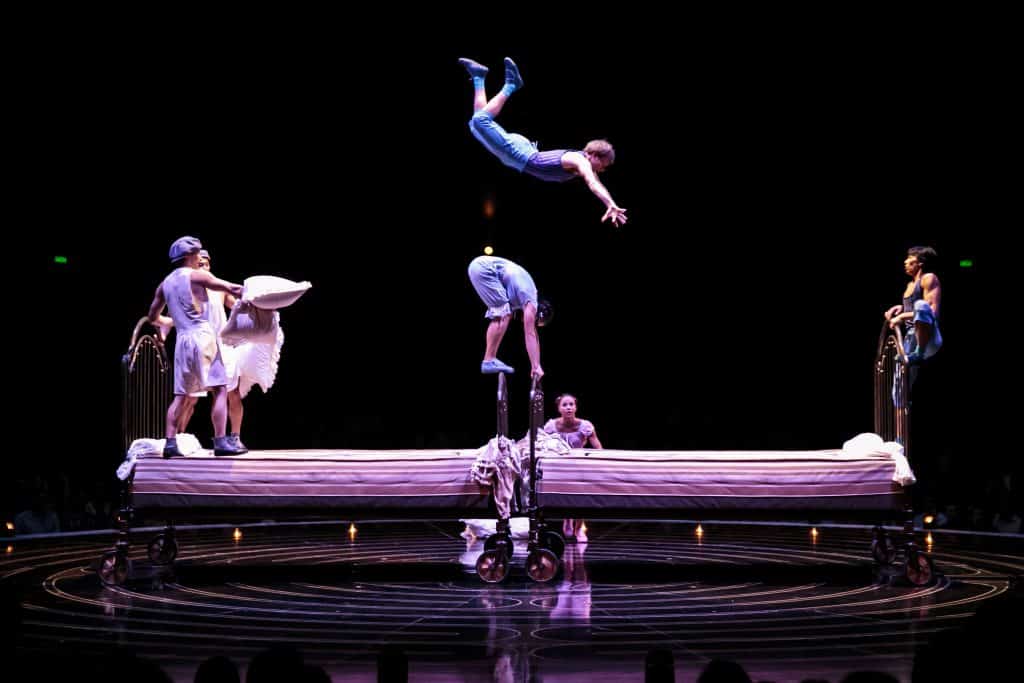