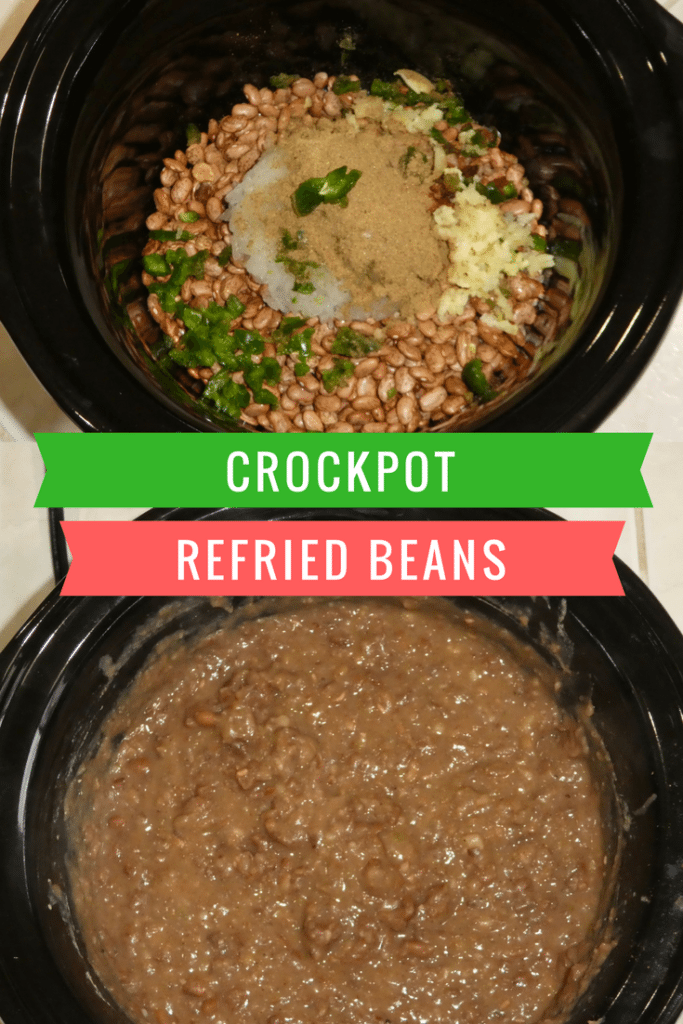 Did you know that you can make refried beans in your crockpot?

This is a super simple recipe for crockpot refried beans that I’ve been using for years. I make refried beans about once a month and I love being able to make them in my slow cooker. I usually cook them overnight on a low setting.

Spicy or non spicy – You do not have to add a jalapeño, but I always add one. I do not think it adds any spice just flavor. If you want spicier beans do not remove the seeds and maybe use two jalapeños instead.

Sorting Beans – In case you have never sorted beans before I will explain. I always pour them into a colander and sort through them. I take out any that are shriveled up or are broken. Once I have picked out the bad ones I rinse them with cold water.

Pour enough water over the beans to cover completely, about 7 cups. Turn slow cooker on high and cook for 8–10 hours. You can also cook on low for 12 hours or longer.

Once beans are very tender they are ready to mash. Before you start mashing the beans, remove extra liquid.
Use a potato masher to mash the beans. If needed, add some bean liquid back in to reach the right consistency. Salt and pepper to taste.

Now, I have had a few people “call me out” that these are not refried because I mash them in the slow cooker instead of moving them to a skillet and mashing them in hot grease, which makes them “refried”. You can do this if you want, sometimes I do and sometimes I don’t. I personally do not think it makes that much of a difference.

What to do with refried beans?

You can now use your crockpot refried beans as a side dish to go along with an entrée like Tacos al Pastor which I also make in a slow cooker or you could use them as the base in an appetizer like Touchdown taco dip. I tend to make simple bean and cheese burritos with them since it’s such an easy meal and the kids gobble them up. We eat burritos like other families eat mac and cheese. It doesn’t hurt that this is a super cheap meal. A bag of beans is less than a buck most of the time and you make way more refried beans this way than you would buying them already made in a can. Any time you can make a meal for a family of four for less than ten dollars you are are winning when it comes to being frugal.

What do you use refried beans in or with?

Tex-Mex Curry – a Crockpot Re