Have you ever sat down and thought about all the money big banks are raking in? I had not really thought about it. I bank with a very large military bank and it bothers me a lot when I see them running commercials on TV, because it seems like a waste of money to me. When I stop to really think about it I realize that although there seem to be benefits for me, they are still making loads and loads of money and they do not share it with me. Turns out a credit union would share it with you and I never realized it until now after visiting Make Your Money Matter.

Benefits of a Credit Union 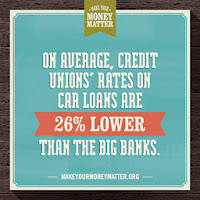 Is Your Money Safe in a Credit Union

“This post is sponsored by Make Your Money Matter, in association with PSCU, though all views expressed are my own.”