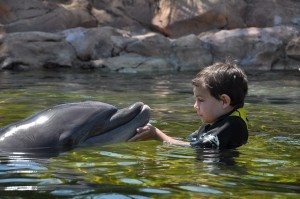 Has your kiddo gotten to meet a dolphin yet?

Swim with Dolphins at Discovery Cove

We recently took all three of our kids to swim with the dolphins at Discovery Cove. It was their big surprise for during our Orlando trip. They knew we were going to Disney World, but they have been there a dozen times. So, the last few times we have gone to Orlando we have purposely tried to mix it up and do something besides just Disney. Last year we went to Aquatica, and before that, we went to Sea World, and this year we went to Discovery Cove.

It was fun to give them hints. I guess they were not really hints, but we let them ask us 20 questions, a game we often play. It was pretty fun, because Discovery Cove isn’t a theme park, nor is it a traditional water park. So, the kids just could not figure it out! 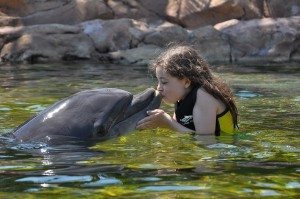 About the Dolphin Swim

Our youngest is a strong swimmer, but the water is extremely cold. The trainer swam him out on her back with me next to her. She then got him situated with the dolphin for his ride. They made sure he was comfortable the entire time. I was waiting for him next to the other trainer and I was the one that took him from the dolphin. They have this system down with young kids, so don’t worry!

Enjoy an all-inclusive day resort experience at Discovery Cove®, the #1 Amusement Park in the World according to millions of travelers in the 2014 TripAdvisor Travelers’ Choice™ Awards.