Things To Do In Dublin On A Budget

Things To Do In Dublin On A Budget

When visiting Dublin, you will need a well-lined wallet. It is good to know that the city is not the most expensive place in Europe. Geneva, Switzerland, has this privilege. Still, spending a weekend in Dublin will cost you an arm and a leg. The good thing about Dublin is that there are plenty of tourist attractions you can see for free. Here are my 7 budget tips.

Accommodation and food will take up the larger part of your budget. If you don’ t mind sharing with five others, the dorms in An Oige Dublin International Youth Hostel are the perfect budget hotel. The bonus is that the hostel is situated in the center of Dublin. If you find a hotel for less than €100 ($137), count yourself lucky. Eating out takes a bite out of your wallet so be sure to swallow the last crumb of your full Irish breakfast. The meal is free because it is included in your room price. All hotels have complimentary tea and coffee-making facilities in the room. Buy Cup-a-Soup and cup noodles in the supermarket, pour on boiling water and your budget meal is ready 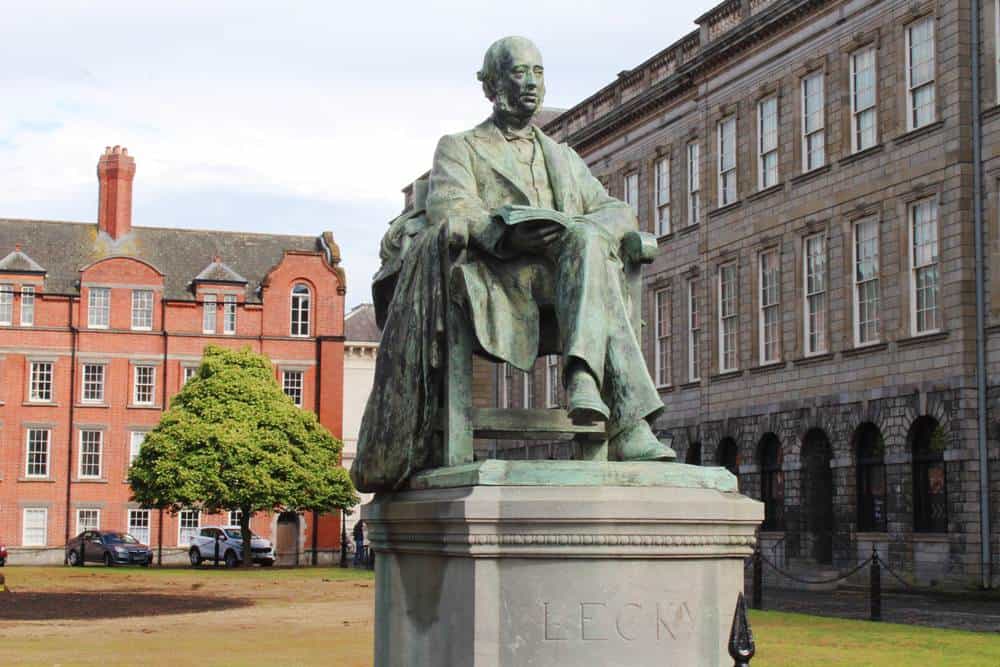 You can wander about the grounds of the university for free, but most tourists come to see the Book of Kells, an illuminated manuscript dating from 800 AD. The book contains the four gospels of the New Testament written in Latin. It is on display in the Old Library but admission is €10. Go to the library and browse the paperback edition free of charge.

The Bank of Ireland is the round building opposite Trinity College. The building used to be the Houses of Parliament, consisting of the House of Commons and the House of Lords. The Commons is now a hall used for money transactions. The House of Lords is still as grand as in the old days with its oak woodwork and Waterford crystal chandelier. Two wall tapestries depict the Battle of the Boyne and the Siege of Derry, two great Protestant victories over Catholic Ireland, leftovers from British rule. Visits are welcome during banking hours. This site is not pushed as a tourist attraction. Simply ask the porter and he will show the way.

Marvel at the Frieze of Sunlight Chambers

Sunlight Chambers is the building at the corner of Parliament Street and Wellington Quay. It is Italian in architecture, with overhanging eaves, a tiled roof and arcaded windows. The Chambers were the Dublin office of Lord Lever. Sunlight is a brand of soap manufactured by the Lever brothers, now Unilever. The striking feature of the building is the multi-colored double frieze which depicts men dirtying their clothes and women washing them, undoubtedly using Sunlight soap.

Mix with Shoppers in Grafton Street

This is Dublin’s main pedestrian shopping street. Listen to the buskers and do some people watching. At number 78 is Bewley’s Oriental Café. The aroma of freshly roasted coffee is hard to resist and so are the sticky buns. Climb to the first floor to a tiny museum displaying old photos, teapots and other memorabilia that tell the history of the coffee, tea and chocolate trade in Ireland.

Georgian mansions line the three sides of this elegant square. These houses look uniform and sober, but at a closer glance they are all different, especially their front doors. They are painted red, yellow or black, have fanlights, ornate door knockers and foot scrapers, to remove mud from gentlemen’s shoes before venturing indoors. Plaques next to the doors indicate that some illustrious men lived in the square: at number 1, Oscar Wilde; at 52, W.B. Yeats, and at 84, Daniel O’Connell, who gained the rights for Irish Catholics to enter parliament in London in 1829. The fourth side of the square is the frontage of Leinster House, Ireland’s parliament. The Merrion Square side of Parliament was made to look like a country house, whereas the entrance on Kildare Street looks like a town house.

Visit One of Dublin’s National Museums

Dublin’s national museums are free of charge and an excellent way to spend a rainy afternoon except for Mondays when they are closed. Whether you are interested in stuffed animals, French Impressionists or Irish art, Dublin has a museum to satisfy your curiosity.

National Museum, Kildare Street, Gold objects from the Bronze and Iron Age (a bit of a contradiction, but the objects are real gold).

Dublin Civic Museum, William Street South, Artifacts from Viking Dublin to a model of a Howth (Dublin suburb) tram and the head from the Nelson statue in O’Connell Street, toppled by the IRA in 1966.
National Gallery, Merrion Square West, Irish art and every major school of European painting.

Ryanair, Ireland’s budget airline, connects Dublin with many European cities. If you book in advance, your trip can be quite economical. London to Paris is only €30 ($41)on a weekday, at the weekend you will pay €60 ($82). Prices vary a lot depending whether you book early or want to leave on a Saturday or Sunday.

Pack your bags and don’t forget to pack some inexpensive instant meals to tide you over. Keep these 7 tips with you, head out to Dublin on Ryanair, and, most important, enjoy Dublin on a budget.