The Santa Cruz Mountains in California have a haunted history. The mountains that rise between Silicon Valley and the Pacific coast once held a variety of small towns that are only memories now.

There were notorious murders in the town of Lexington, and thirty-two men died in a railroad tunnel near the ghost town of Laurel. A neglected cemetery where mercury miners lie buried overlooks the community of New Almaden. These mountain towns have mostly gone back to the forest now, or have been covered by the waters that are stored for the thirsty citizens of bustling valley towns.

In 1919, former palm reader William E. Riker and about thirty of his followers moved to a community he named Holy City. They called their religion the Perfect Christian Divine Way. The “way” involved celibacy, except for Mr. Riker, temperance, white supremacy, segregation of the races, and segregation of the genders.

All members of his church gave up material possessions, to Riker, which is how he could afford to move his flock to the Santa Cruz Mountains. He turned Holy City into a lively tourist trap. Billboards along Highway 17 advertised the place with slogans like “If you are considering suicide, crime, or marriage, see us first.”

There was a gas station, where attendants filled radiators with “holy water.” There was a restaurant, and a comfort station with many stalls. A telescope was available, for 10 cents a view. There was a radio station, KFQU. It didn’t last long, but in its heyday it featured the voice of William E. Riker, The Comforter. Holy City was incorporated in 1926. It never had a church, but services were held in Riker’s home.

The population of Holy City was over 300 in the depression years, but declined in the 1940s. In 1942, Riker went on trial for sedition, due to his support of Adolf Hitler. He was acquitted. He ran for governor four times, never receiving many votes. He lost control of Holy City in 1959, and most of the town’s buildings happened to burn down about that time.

In the end, William Riker surprised his few remaining followers by converting to Catholicism. He died three years later, at the age of 96. Remnants of Holy City can still be found, on Old Santa Cruz highway quite near Highway 17. There is an art glass studio there, near the former home of William Riker.

Between 1880 and 1940, travelers left the town of Los Gatos by a narrow gauge train and made their way through the mountains just as quickly as commuters now do, stopping at a string of station towns along the way. The train’s original purpose was to carry lumber from the many sawmills of the mountains. 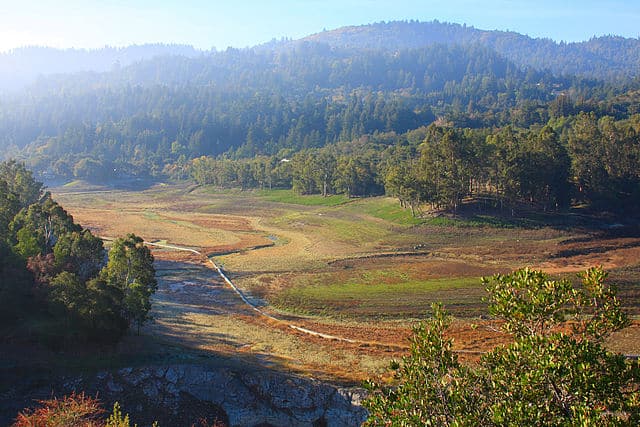 The first stop was Alma, now submerged under Lexington reservoir. When the waters are very low, old foundations and roads show up on the lakebed. The town once had a sawmill, a smithy, a post office, a hotel, and a saloon. It faded away after Highway 17 bypassed the town in 1940. After Alma, the tracks continued to Wrights Station, and then through a two-mile tunnel to the town of Laurel. 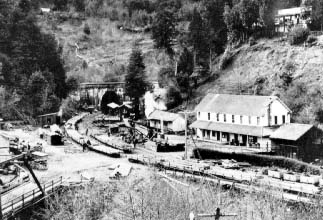 When workers were digging the tunnel between Wrights and Laurel, they hit a seam of coal that gave off natural gas. Perhaps they tried to burn away the fumes with a torch. In any case, there was an explosion. Thirty-two men died building the tunnel, all of them Chinese except the supervisor.

Redwood lumber from Laurel helped rebuild San Francisco after the earthquake and fire of 1906. The next town was Glenwood, where travelers could visit a hot spring spa. Clems, Zayante, and Eccles came next. All were once lumber towns. All are ghost towns now. The train stopped at Scotts Valley too, and Santa Cruz, but those cities still thrive.

Before the tracks were laid, there was a stage route through the Santa Cruz Mountains. Lexington, just north of Alma, had started as a sawmill as Alma did, and grew to be about the same size. It became a stop on the route from San Jose to Santa Cruz. Stage drivers increased their teams from four horses to six at Lexington, where the mountains grew steeper. When the railroad began service in 1880, it began Lexington’s decline.

Lexington was famous in 1883 though, for a sensational murder. A Los Gatos bar owner, Lloyd Leadbetter Majors, hired Joseph Jewell and John Franklin Showers. He commissioned them to rob William Peter Renowden and Archibald McIntyre, who lived in Lexington and were said to have a huge cache of gold coins. On March 11, 1883, the thugs went to their cabin, and apparently tortured the men to make them give up their horde. The trial was a media sensation. Majors and Jewell were hanged. Showers got 15 years, but was killed by another inmate at Folsom Prison.

The ruins of Lexington are underwater now. It is near Alma but its foundations cannot even be seen at low water. By 1950, there were fewer than 50 residents in Lexington, and they moved away before the waters rose behind the dam in 1952.

English Camp, Spanish Camp, and the short-lived Chinese Camp were company towns. The New Almaden Quicksilver Mining Company once ran the most productive mercury mines in the world. The remains of the mines and the places where the workers lived are now a county park set in the beautiful hills dotted with old oaks and bay trees southwest of San Jose.

The Ohlone mined cinnabar for body paint in these hills. Cinnabar is a reddish ore of mercury. Their mine was a sacred cave at the top of a mountain. 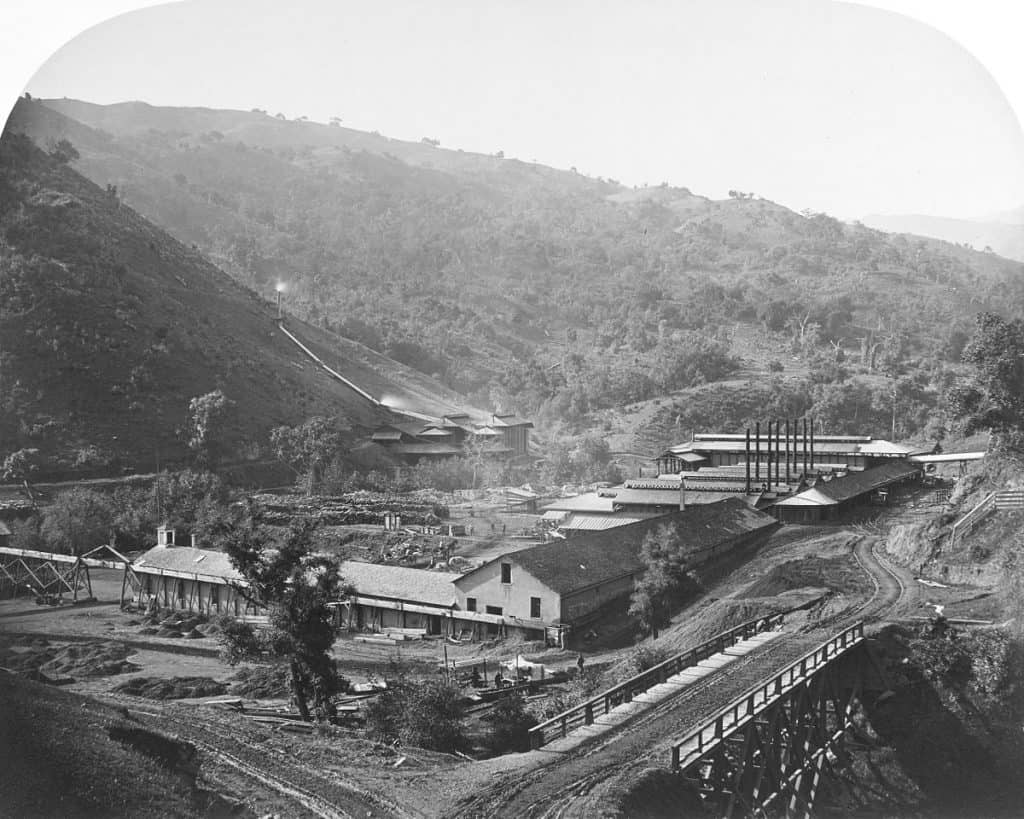 In 1845, Andres Castillero filed a mining claim on their land. He later shared his claim with Andrew Forbes, who started the Quicksilver Company and brought workers north to California. He named the place New Almaden, after a mining district in Spain.

Mercury turned out to be very useful. It could separate gold from ore. As the gold rush of 1849 proceeded, the Quicksilver Mines expanded. Three towns were built on the steep hills near the mines. The Cornish miners lived in Englishtown, also called English Camp. There was also a Spanish Camp, and briefly a Chinese Camp. Trails go through the area of these towns, but not much remains. 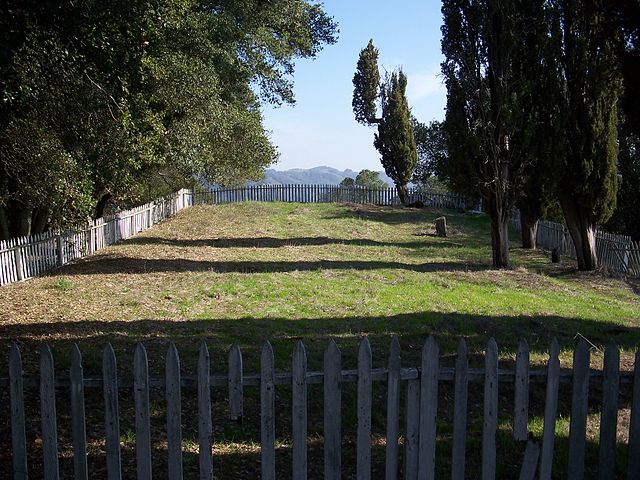 Rusting mining machinery and company buildings stand near the steep trails. The Hidalgo Cemetery is a field of wildflowers and long grasses enclosed in a white fence, with a lovely view. There are many mines, blocked off now. Most operations shut down after the gold rush, though one last company persisted until 1926. The entrance to the San Cristobal mine has been reconstructed, so that visitors can get an idea of what conditions were like when men went down in the mines.

The most remarkable sight is the old furnace where sweating workers cooked ruddy cinnabar ore into pure mercury. Its tall chimney stands on the shoulder of the hill, overlooking the New Almaden Valley, where management lived. Many visitors speak of an evil feel to the site, though it may be just that they know about the dangers of mercury.

A museum in the pretty town of New Almaden tells the story of the mines that loom above the valley. A lovely home built by the mine manager still stands among oaks and meadowland, with many airy rooms and wide porches to catch the breeze. Quaint cottages huddle together along the stream. Reservoirs gather water and provide recreation.

Mercury is now known to be highly toxic. Nothing caught from the creeks that drain the area is fit to eat. Prominent signs warn the ignorant all along the watercourse not to fish. Probably, a buried layer of mercury underlies all the streams near here, and even reaches the south end of San Francisco Bay.

California’s past lingers in many places, preserved in parks like New Almaden Quicksilver and Lexington County Parks. Other historic sites have to be sought out patiently, but they too hold parts of the history of California, that wait to be explored.