Going from flag to tackle football

Going from flag to tackle football

My oldest child is nine and he played four years of flag football. He started when he was 5 years old and took to it pretty easily. Every year he was a stand out player. He first played through the YMCA. The YMCA was a laid back program. Then he played through the NFL flag program and it was more rules, longer games, and they had referees. 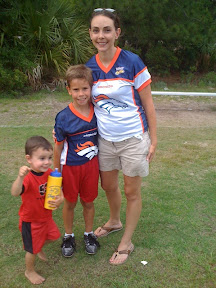 We knew last year he was at the point, he was going to have to play tackle this year. I was very nervous. At his age Pop Warner put him in a 9,10, & 11 age group. At 9 he was going to be one of the youngest and smallest on his team.
This wasn’t the only change. We went from 1-2 practices to 3 practices a week, 2 hours long with a game on Saturday. A FULL game I might add 2.5-3 hours long!

It was tough watching him get slammed into the ground, but it was exciting when he got his first big tackle.
I was worried he wouldn’t play this year, but he is. He is the second string running back and he had two good carries at today’s game. The 1st game of the season. I think his gymnastics training gives him an advantage. He is much more flexible than the other kids on the team. 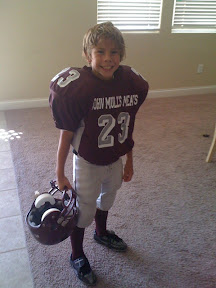 After experiencing a full season, I feel like I should have waited to have him play tackle. He did not get hurt, but the age spread was too much. Had it just been 4th and 5th grades I would probably feel different. Many 11 year olds are way bigger than a 9 year old. So, to me that becomes a safety issue.
Another issue is kids getting burned out. By the time Noah was a freshman, he had been playing tackle football for five years and was totally burned out. He quit part way through the season. I wonder if I had waited a few years to have him play if he would still be playing now.
2017-10-01T13:34:14-05:00By Meagan|Categories: Life, Parenting|0 Comments