Find out how to take a military hop and fly for free around the world on military aircraft. What is a military hop?

A military hop is when you are able to fly on a military aircraft from one location to another location. This is also known as and referred to as “space a travel”. Military hops are only available at certain bases and you never know where available planes may be going or how many seats will be available. I consider the ability to fly for free on military flights to be one of the best benefits for military families.

72 hours before the flight most military terminals update their Facebook pages so you can see where the planes are going. These are always subject to change at a moment’s notice. It is not always free to travel space a but it is extremely cheap if you are able to take one. Your travel plans must be extremely flexible.

There is no set schedule for any flights. Just the schedule they publish on Facebook 72 hours out. How to take a military hop?

If you are on active duty you must be on leave to be eligible to get on a hop. You must show your orders or leave paperwork to get on a hop. The military member is allowed to fly space a and bring direct dependants with them. Spouses are not allowed to hop without the military sponsor unless stationed overseas. Each dependent must show a military id unless they are under the age of 9.

Baggage allowance varies by aircraft. You are allowed to take quite a bit of weight, but since we never know exactly what we are getting into we always pack as light as possible. At times we have had to walk from the Space A terminal to billeting and it would have been a nightmare if we had a lot of luggage with us. Facebook pages have made it so much easier to see where the planes are going. Terminals release the tentative schedules on their Facebook pages 48 – 72 hours in advance. Here are a few Facebook pages. This is by no means a complete list. To find more use the search tool inside Facebook and type in the passenger terminal. It should bring up a lot of them. Basically anywhere there’s an air force base with cargo planes or tankers, there’s a chance that there are flights going in and out that you could possibly get on.

Aviano, Italy (They have a rotator, so lots of seats.)

Souda Bay Passenger Terminal – Greece on the island of Crete

Tacoma, Washington (There is a USO right next door!) USO at Joint Base Lewis McChord

What to expect on a Military Hop

You will need a coat, especially in the winter. It gets extremely cold during some flights. You will notice that in every photo of us on a military flight we are wearing coats or jackets.

Snacks are given out during the flight, sometimes, but not always. You may bring on your own food and drinks.

If a meal is available for purchase, get it. If you are traveling with a hungry teenager, buy them two meals. One “lunch box” typically costs around $6 and has a sandwich, soda, water, chips, granola bar, one piece of fruit, and a dessert. Eden opening up her Space A lunch box.

The Cost to fly Space A

Zero – So far, I have never had to pay to hop. I know that if you get on the rotator in Baltimore you have to pay. If there is a fee, they will let you know.

Have a Backup Plan

Do you have the money to get yourself home if you are not selected?

Depending on which status you are classified as you may or may not make it on to the hop. For example:

You and your family have successfully hopped over to Hawaii from California. You’ve completed your vacation and are now ready to hop back to California. Only California is having a huge storm, so all flights get canceled that day. The next day twice as many people are needing to hop due to the canceled flight the day before. You are retired, therefore in the lowest category, category six. Only Categories 1-3 make it on to the first flight, the next flight only categories 1-3 make it on again. Things are not looking good and you NEED to get back. Guess what? You have to pay out of pocket for a last-minute one-way flight from Hawaii home on a commercial airline. (I use this example because I watched this happen to a family when we were all trying to get back from Oahu.)

I’ve noticed that I tend to get many of the same questions, so I’ve put together some of the most common ones and answered them the best I can.

What is my space-a priority?

There are six categories people are placed into.

Most active duty will fall into this category.

Can you use an air mattress on a military hop?

Yes, you can use an air mattress on a military plane. We’ve only done it once, but there was enough room and no one seemed to mind. I’ve also seen someone do this on one of the flights we were on, which is where I got the idea!

Also, if the plane isn’t full you can lie across the seats. We bring travel pillows to use on the flights. Can you use electronics during the flight?

Yes, You are allowed to use whatever electronics you want. I saw a guy pull out an entire gaming system set up once and game the entire flight. The kids on their electronics during a military hop

Is a passport needed?

If you are leaving the country you must have a passport. You will have to go through customs when you get to a different country.

Is there a bathroom facility on the plane?

For a long time they could not, but recently the law changed. The 2019 National Defense Authorization Act allows veterans with a permanent and total service-connected Department of Veterans Affairs disability rating to travel space available on military aircraft.
However, there are some restrictions.

Authorized disabled veterans can travel in the continental United States or directly between the United States and Alaska, Hawaii, Puerto Rico, the U.S. Virgin Islands, Guam and American Samoa. So, not Europe or Asia.

Can a disabled military member bring a caretaker along on space-a flights?

Can I just show up?

No, you need to register in advance for each and every flight you take. When a flight is posted there will be an email listed. You need to send them an email to list for the flight.

Can parents of military members take a hop?

No. Military flight benefits are only for the military member’s spouse and children.

Is there somewhere to park my car?

For the most part, there is always somewhere to park your car fairly close to the terminal. Sometimes parking can be somewhere else on the base. Typically that happens at bases that do more hops than other bases like Travis AFB.

I thought it would be fun to add some photos from flying in a KC-135, which is a tanker.

In this first photo, I was laying down at the bottom of the tanker at the very back of the plane. There is a window down there for the boom operator to work and we were able to lay down there and watch other planes refueling. It was awkward but totally worth it! 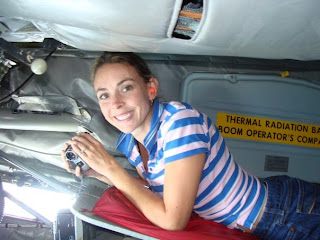 This is the outside of the KC 135 we rode on. It was so hot on there until we got up high. 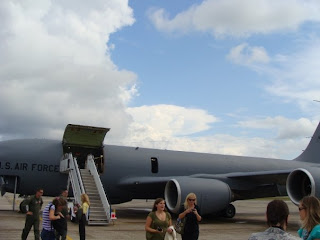 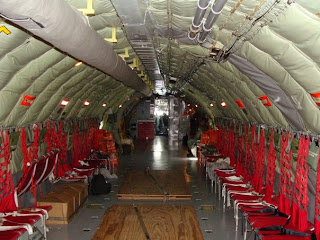 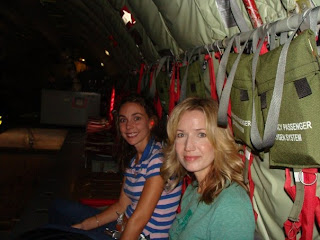