With a population of over 15 million, Istanbul is one of the largest cities in the world. It is vast and diverse, full of beautiful historic monuments and amazing food. Unfortunately, my family and I only had about a day and a half layover in Istanbul when we flew in from Rome. We had to figure out how to maximize our time in Istanbul, despite being tired from traveling. Fortunately, the Istanbulite tour company enabled us to see the highlights of Istanbul and familiarize ourselves with Turkish food all within a matter of hours! It was a thorough and educational tour that made me feel like my family was getting the most out of our short stay in Istanbul. Istanbulite also has dozens of other tours, not only of Istanbul but other popular parts of Turkey.

Bear in mind that this was a private tour in which our guide mixed a food tour along with their typical “Layover in Istanbul” tour itinerary. 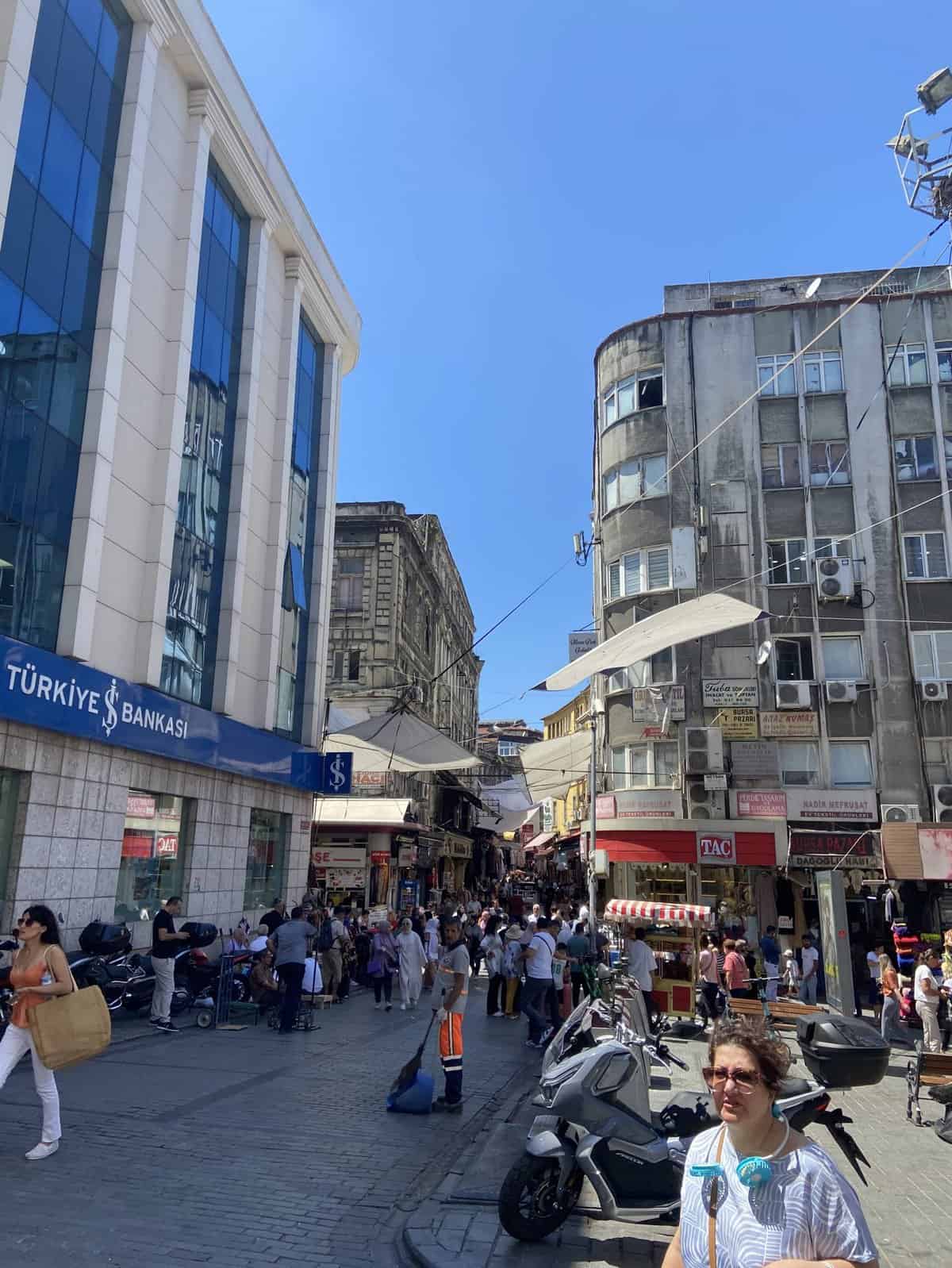 Our guide picked us up in a nice van which transported us from the “New City” to the “Old City.” She described it as “stepping back in time.” As we crossed the bridge over the waters of Golden Horn, our guide explained the history and geography of the region, so we could better understand the areas we would explore that day. 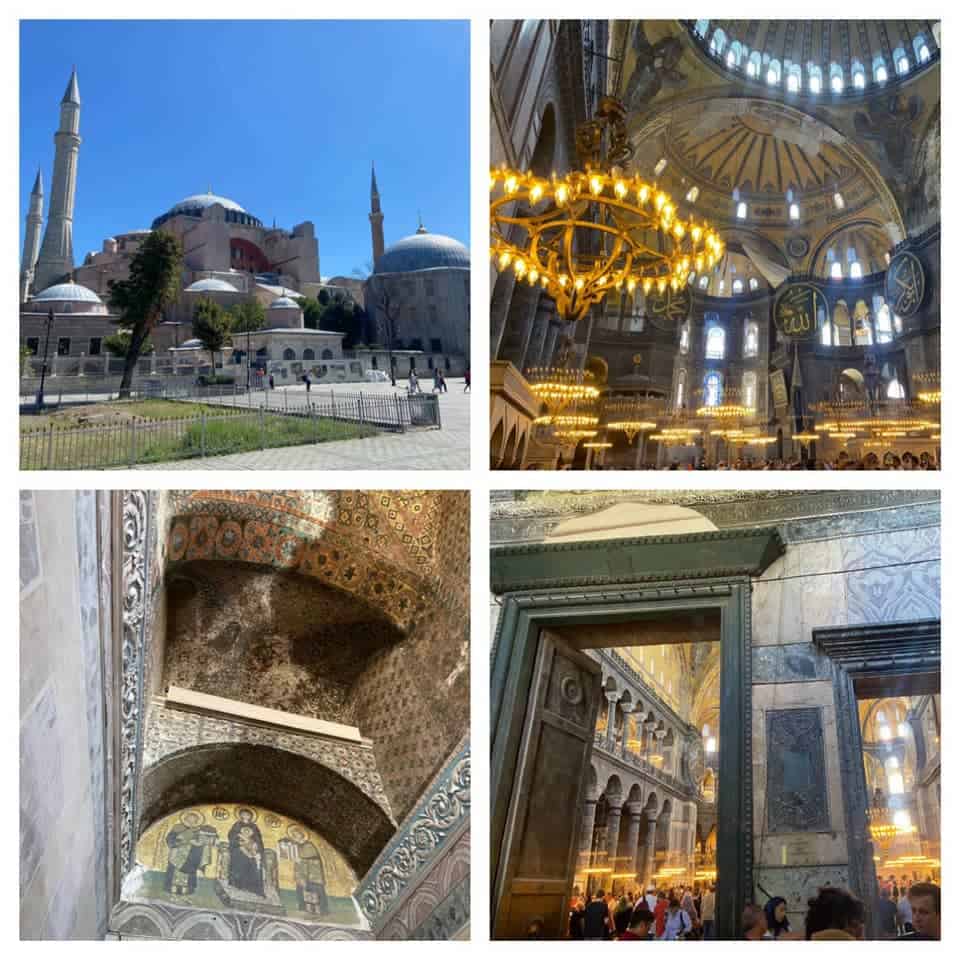 Our first stop on the tour was the Hagia Sophia Mosque. Of the thousands of mosques in Istanbul, this one is by far the most famous due to its grandiose beauty and rich history. Visiting the Hagia Sophia had been on my bucket list for a while. It was incredible to see the Hagia Sophia’s vibrant exterior, along with the plaza and fountain between it and the Blue Mosque. Both men and women must wear clothes covering legs and shoulders to enter. Women must also cover their hair with head scarves. If you do not have a head scarf, I believe you may purchase one outside the entrance.

We took off our shoes and followed our guide around. The interior of the Hagia Sophia was ornate, and our guide pointed out special spots within the mosque and beautiful relics. We learned about the Christian and Islamic history of the Hagia Sophia, as well as the fascinating way it was built. All the art on the walls and ceilings was incredible. The history of the Hagia Sophia, and the whole country of Turkey in general, is deeply tied to Christian and Muslim roots. Every day that we explored Turkey and learned new things was a wonderful surprise. It felt like such a privilege to walk the same streets and the same buildings these famous historical figures inhabited.

We unfortunately did not tour the Blue Mosque because it was under renovation and will likely be for a long time. Our guide still told us a bit about the Blue Mosque and the blue iznik tiles for which it was nicknamed. 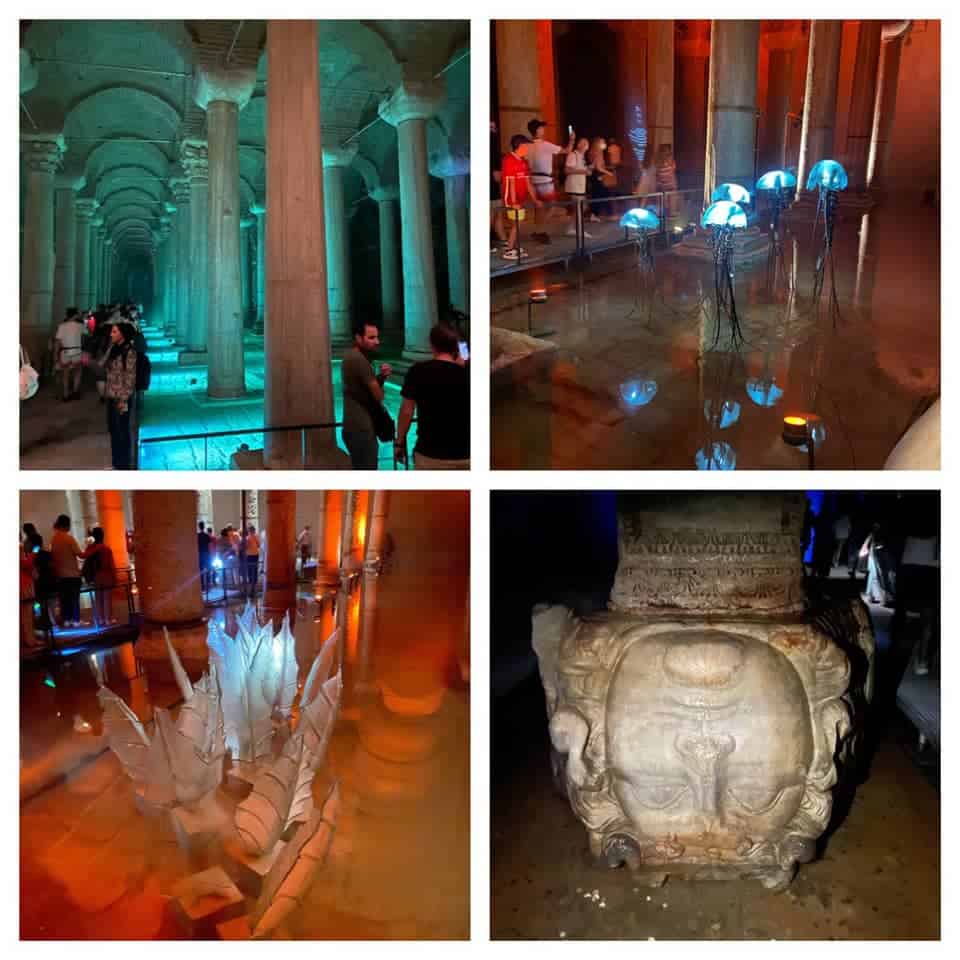 After leaving the Hagia Sophia, we walked a short distance to the Basilica Cistern. From the outside, it doesn’t look like much more than a small building with a line of people outside. The entrance fee for the cistern is not covered by the tour, so I believe you will have to buy your own tickets.

We entered the building and ventured down the stairs into the dark. The Basilica Cistern had recently been renovated to become a larger, more artistic experience. It is mostly drained, except for about a foot of water at the bottom. You explore the cistern upon a metal-grate platform. Dispersed throughout the waters are beautiful sculptures, metal figures, and other art displays from current day Turkish artists. The waters and the high columns are lit with color-changing lights which create a fascinating light display as you walk throughout the cistern.

My family happened to enter the Basilica Cistern at the perfect time, right when the whole light and sound display had reset. We got to experience the show from beginning to end. Aside from all these modern flashy touches, the atmosphere was incredible and still felt so tied to its history. I thought it was a genius way to combine the new and the old. Our guide told us all about the columns which made up the cistern and how it served the city of Istanbul before it was no longer of use. 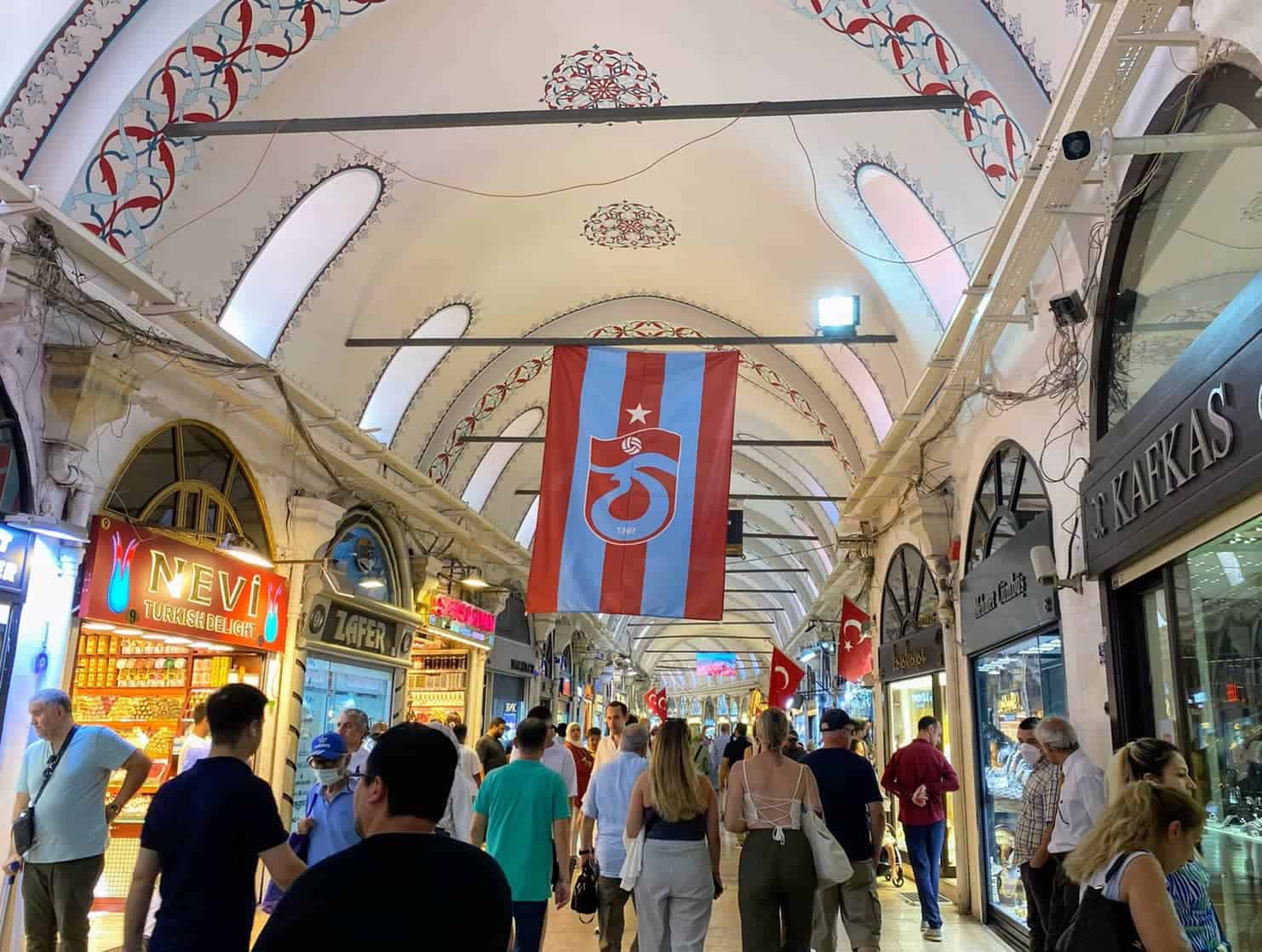 Our next stop was the Grand Bazaar, a most famous location for both locals and tourists to do their shopping. As you can guess from its name, the Grand Bazaar was massive and almost like a maze. I have no idea how our guide navigated us through the whole market. Rows upon rows of shops sold gold jewelry, Turkish rugs, carpets, Turkish ceramics, traditional clothing. Just when I thought I’d seen it all, we went to the outdoor section which stretched out before us as far as I could see. This area had more modern/western clothes and other everyday commodities. I’m glad we had a guide who directed us toward cheaper stores to do our shopping and grab any souvenirs we’d like. 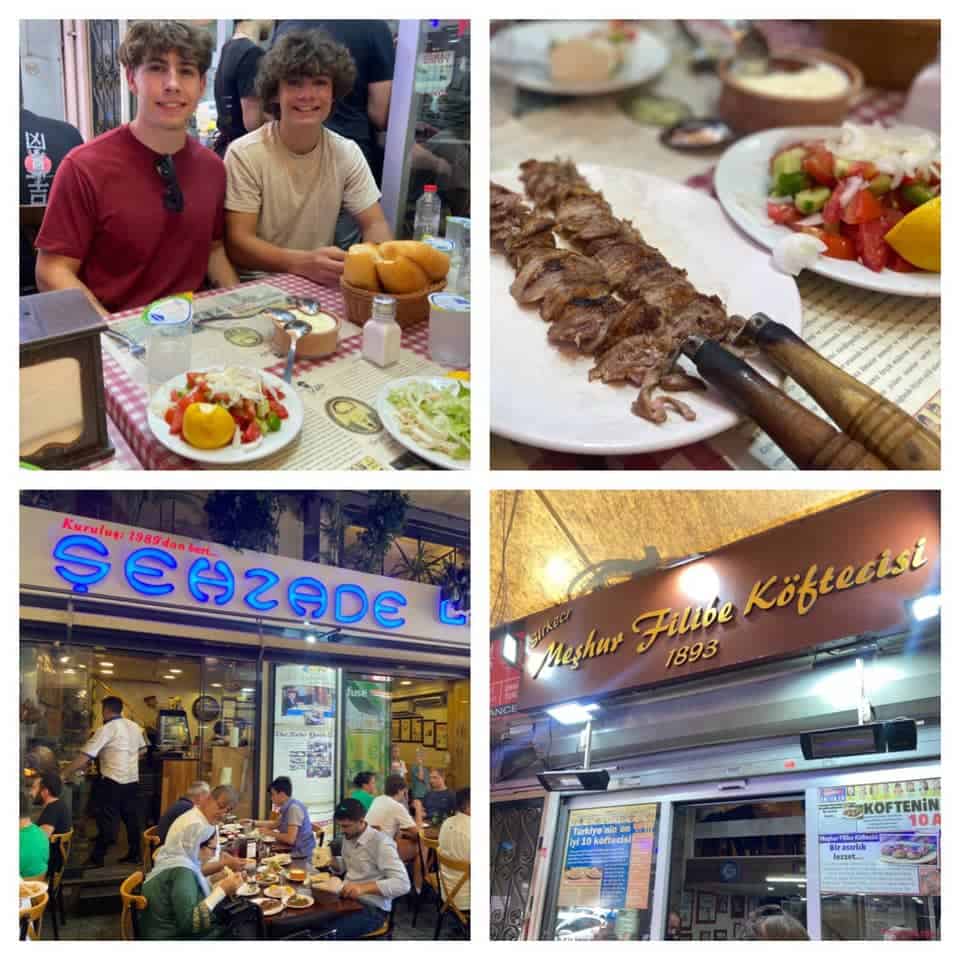 As we explored the Grand Bazaar, we stopped at multiple places to try different Turkish foods. We grabbed small gyros from a place called Gul Ebru Kantin, just to hold us over for the real meal later. Our guide also allowed us to stop for a cup of Turkish coffee.

Lunch was at Meshur Filibe Koftecisi. We sat at a table, and our guide ordered food from two restaurants right next to each other, the second being Sehzade Cag Kebap. We ate pita bread with yogurt, salad, kofta, and lamb kebabs. All the food was delicious and a great introduction to what we’d be eating over the course of our trip through Turkey. 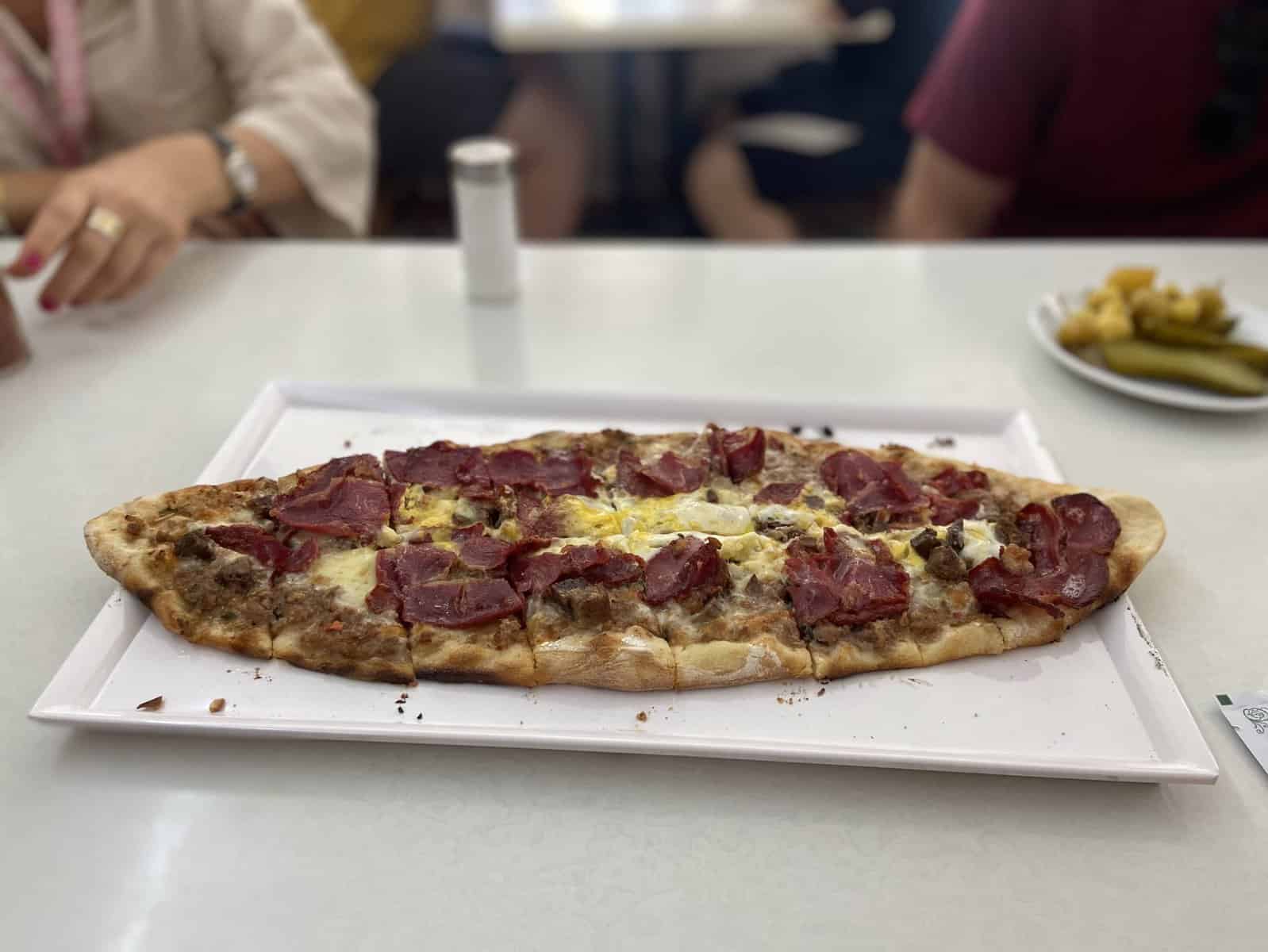 Later in the tour, we stopped at a restaurant called Hocapasa Pidecisi that served all kinds of pide. Pide is often likened to Turkish pizza. Despite already having eaten a big lunch, we ate every last piece of pide. 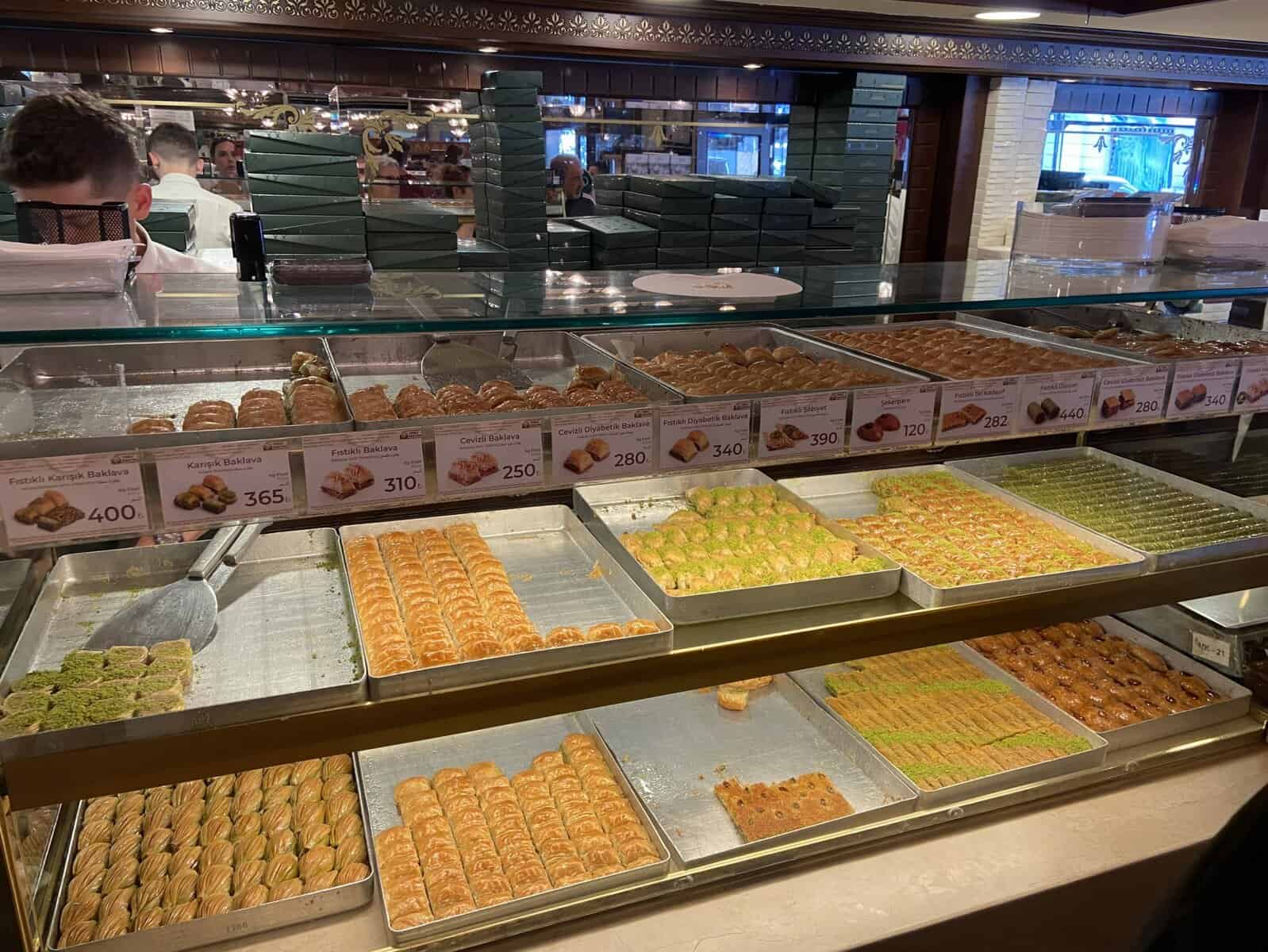 To finish off our tour, we picked up some Turkish delight. Our guide took us to a sweets shop called Ali Muhiddin Haci Bekir, whose sweets have been around since the year 1777. We ordered a variety of different flavors. It was my first time trying Turkish delight, and I unfortunately wasn’t a huge fan. However, other members of the family loved it.

We followed this up with baklava from Karakoy Gulluoglu. Once more, we ordered a couple of different kinds. Our favorite by far was the hazelnut with cream. While the sweetness of baklava is a little overwhelming, it is delicious.

After finishing our baklava, the guide showed us the way across a bridge back to the newer part of the city. She walked us all the way back to our hotel, where we ended the day stuffed with Turkish food and new information, wondering how we would possibly eat dinner that night.

A Perfect Holiday on the Turkish Riviera 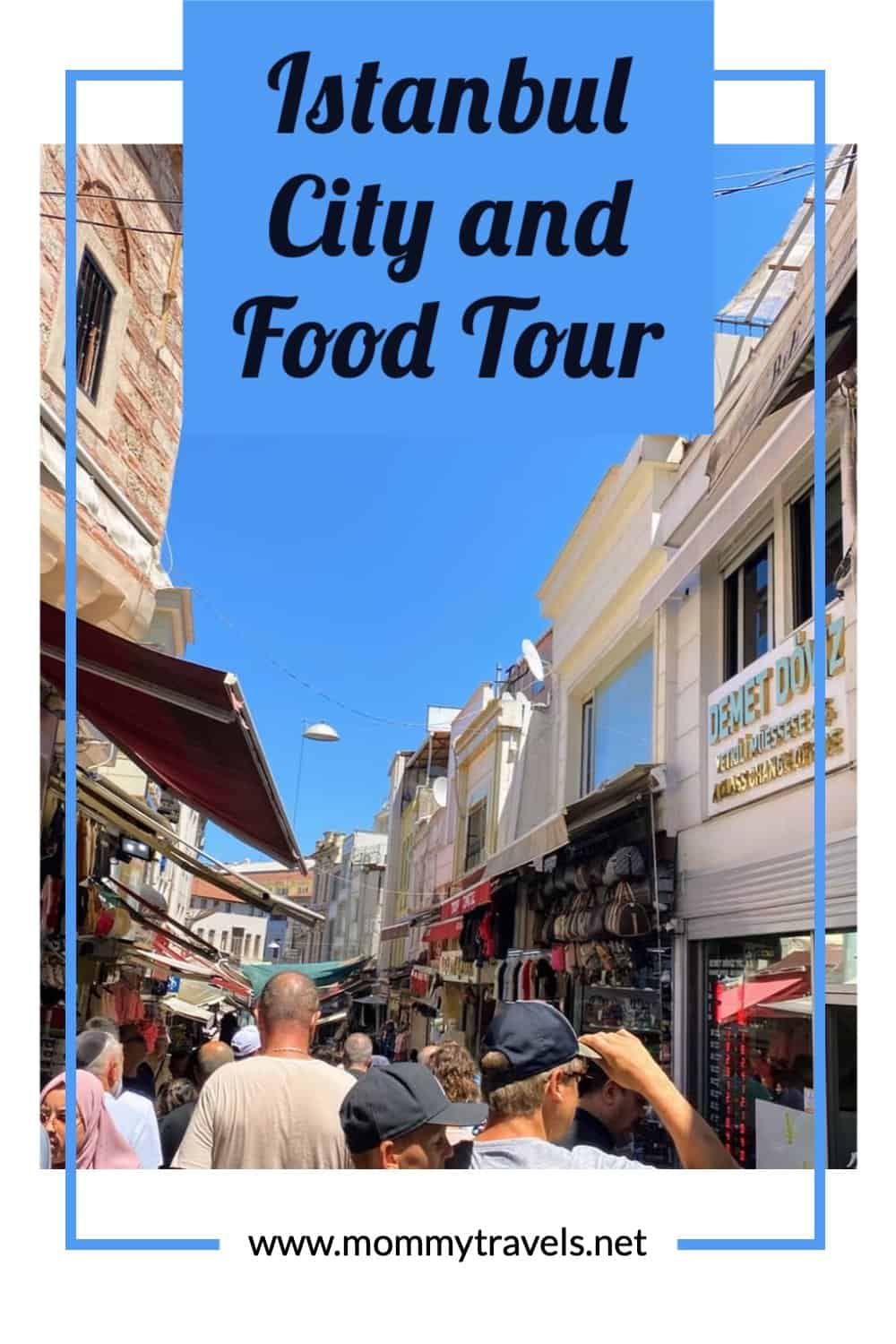