Mamma Mia is one of the most spectacular touring Broadway shows you can see. Keep reading to see what to expect and why you should go see it. 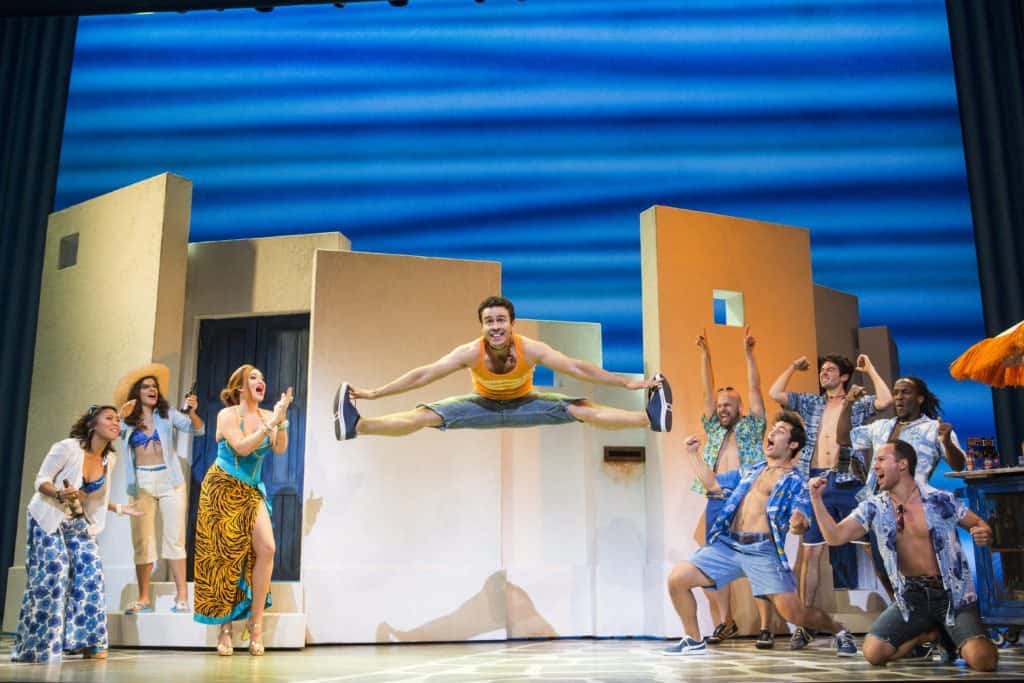 Last night through a fantastic turn of events I was able to get tickets to Mamma Mia! at the historic Keller Auditorium in Portland, Oregon. The Keller Auditorium is a supreme theater in downtown Portland known for putting on the best shows in town.

The seats are comfortable; the stage is wide with lots to see and the scenes on stage always gripping. Last night, the electricity and excitement began before the curtains even went up. As the lights went down, before they drew back the curtains ABBA hits began to play and it was clear that the whole audience knew the music well and was ready for a show. 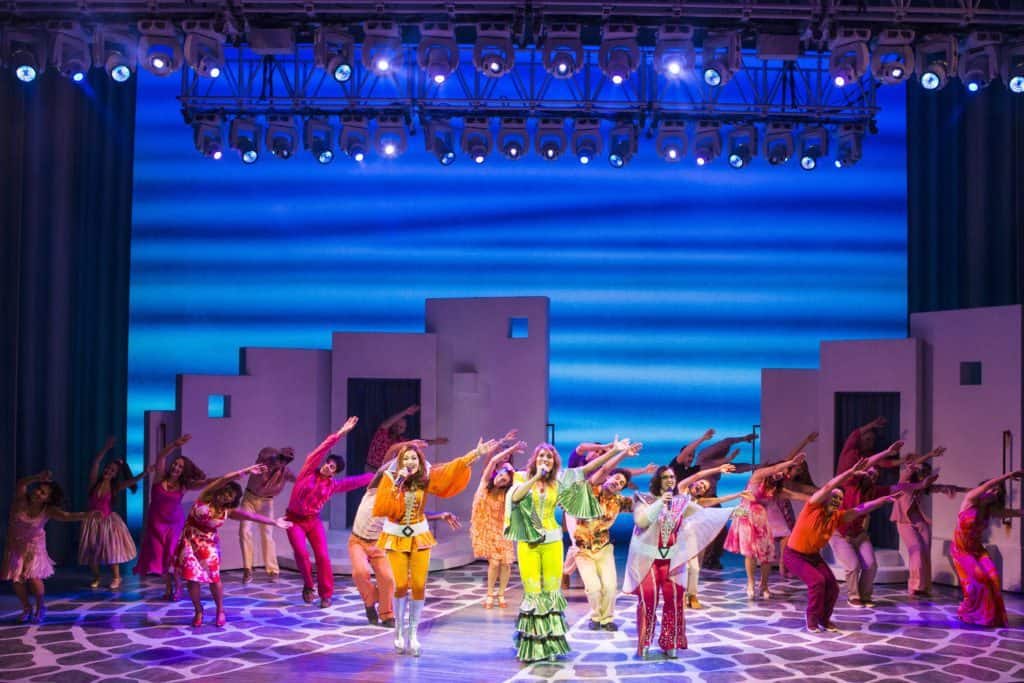 It began with a simple set suggesting a small Greek town, and we are introduced to Sophie Sheridan a 20 year old girl, played by Lizzie Markson who is planning her wedding to Sky (Dustin Harris Smith). She explains how she has found her mom’s diary and having read the juicy details from 20 years ago she believes she has found her father. A man she has never known, and whom she desperately wishes would walk her down the aisle. The only problem, there are three potential candidates for the job. Sophie excitedly explains to her friends that, pretending to be her mother, she has sent wedding invitations to all three men. Her mother, Donna, knows nothing of this, but Sophie is sure that once she meets the men she will know which one is actually her father.

Just like the Greek Islands, the set is simple but the view is spectacular. The actors are wearing simple every day vacation type clothes, but with a variety of vibrant blues and just like the ocean surrounding the Greek islands themselves. It is the perfect combination of colors to make you feel that you are in Greece too. Then the hits start coming. Awesome ABBA songs of a bygone era are constantly flowing and the audience was absolutely captivated.

Quickly the three possible fathers enter the stage. Harry, a banker, Bill an adventurer and writer, and Sam an architect. They tell a little about each of their stories, each suspecting themselves to be the father of Sophie and each believing that they have been invited to the wedding by their old lover, Donna. They all still clearly carry a flame for Donna in one form another, whether it is real love or simply happy memories of a vacation romance of a time gone by.

This is where Donna Sheridan (Betsy Padamonski) comes in and the stage is hers. We learn about her stress as the mother of the bride, of trying to run a small business, but mostly her spontaneous, free love attitude to life. She is somewhat bemused by the traditional white wedding that her daughter appears to want. As a flower child of the seventies, the idea of an institutional standard white wedding, of tying yourself to one guy is not attractive to Donna nor does she feel it is necessary. She emphasizes to Sophie that one does not need a man to be happy. In this scene we also meet Donna’s two rather comical friends Rosie and Tanya. Loving life, just like Donna, they are spontaneous, colorful characters that have grown up in the same era. They share the same attitudes as Donna towards life. Today the two women would be described as “cougars” as they hilariously hunt down their prey which consists of the young local men that are clearly half their age. Cue “Gimme Gimme Gimme a man after midnight”. Cashelle Butler as Rosie and Sarah Smith as Tanya remind me of a hilarious wicked step sister act to Donna’s Cinderella. Wicked, however, in a way that is funny and charming and the audience can’t help but love them.

As the plot thickens, the costumes become more and more vibrant, the scenery barely changes throughout the whole musical and it does not matter at all because the beautiful colors of the costumes steal the show.  Everyone feels like they are on vacation as we all attend the wedding of Sophia and Sky with “knowing me knowing you” serenading them down the aisle.  Except this wedding has a plot twist.  When Donna confesses she has no idea which of the three men is Sophie’s father, Sam confesses his love for Donna, Harry confesses his love for a local waiter and Sophie confesses that she would actually love to see the world before settling down.  Sky is happy with this turn of events, the three potential fathers agree to share their new found daughter and the whole cast is happy.

The cast and audience are all elated as our feet are tapping and we are all dying to dance.  The show is over, but in a way has hardly begun. Those fans who rushed out of the theater in search of the quickest exit out of the city missed the best show in town as the cast performed four of ABBA’s greatest hits, and the costumes keep getting more and more amazing.  The colors, the sequins, the bell bottoms, fling you back to the 70’s.  An exciting, exuberant, over the top Mardi Gras carnival comes to mind.  The show is amazing.  It is the company’s Farewell tour, it is your last chance to see it. If you get a chance to go, do it!  You will not regret it.