We currently live in Las Vegas  and we could not resist going out for New Year’s Eve. We heard all the horror stories of how they block off the strip and close all the exits off of I-15 and you get stuck in traffic forever. Despite this we headed down there. We actually got down there quickly, but it took a while to get into a parking garage. We finally ended up in the Caesar’s parking lot. They have a huge parking garage and we should have just gone there to begin with. We walked through Caesar’s on the way to the Bellagio and they had random ice bars set up throughout. The ice bars were elaborate. 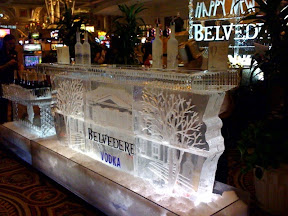 It didn’t take us long to make it to the Bellagio, but we did stop out front to watch the water show.  Around 10:30 PM we went back out and watched another show.  This time it was a very long one, the longest I have seen there.  I assume they did this because it was New Years eve. 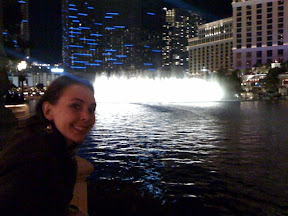 This is us inside the Bellagio. We did a tiny bit of gambling and of course lost!  It was very crowded and hard to get drinks, so be sure to start gambling near the area the waitresses come out of. 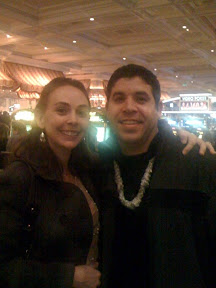 Here we are in front of the lounge we went to called Caramel inside the Bellagio. It was fun. They turned it into a kind of night club with a dj. They had a few party favors and covered the ceiling with balloons. It was so dark we couldn’t get picture inside. The tickets were over priced and the drinks were insanely over priced. Although we had fun, we would not go again and would not recommend it. Their staff was incredibly rude. I watched some of the interactions the staff had with guests and I saw people get yelled at for no reason. I understand there are a lot of people out and the workers are probably uptight, but they were still awful especially when you factor how much money you are spending in there. 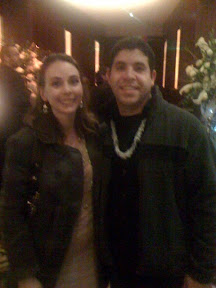 About twenty minutes til midnight we started to make our way outside for the count down and fireworks. 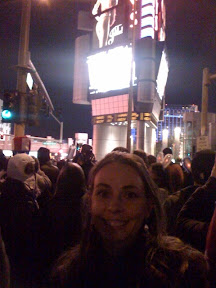 We could see fireworks going off at six different casinos. 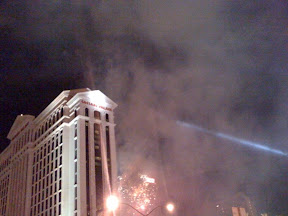 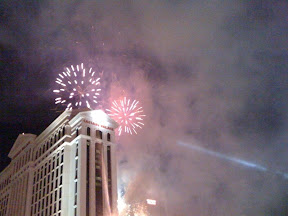 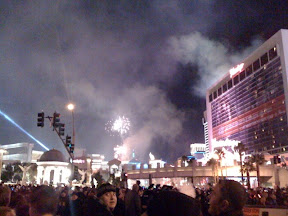