The kids and I had a chance to sail on one the inaugural cruise out of LA. As soon as we saw the ship we were so impressed. Although we have cruised before, we have never been on a ship this large. The Norwegian Bliss cruise ship boasts 20 decks and a capacity to sail with 4,004 guests! 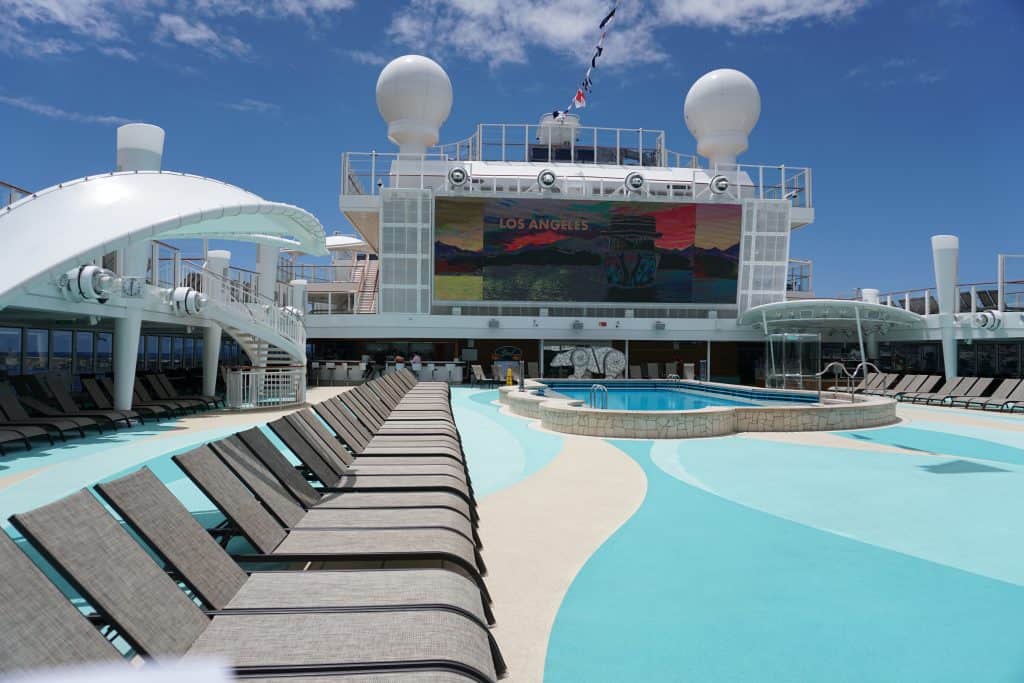 Our favorite part was of course all the kid activities on-board. We attempted to hit every activity we could during the 45 hours we were on the ship and I must say we managed to do quite a lot while having a blast. You can even read what Eden thought about the ship.

They have a small mini golf course up top and by small I mean only five holes. Here we are playing mini-golf over behind racetrack. I am pretty sure I won, but Noah swears we tied! There is no extra fee to play mini golf, it is included in the price of the cruise and it does not need a reservation. You can just walk up grab a putter and a ball and start playing. 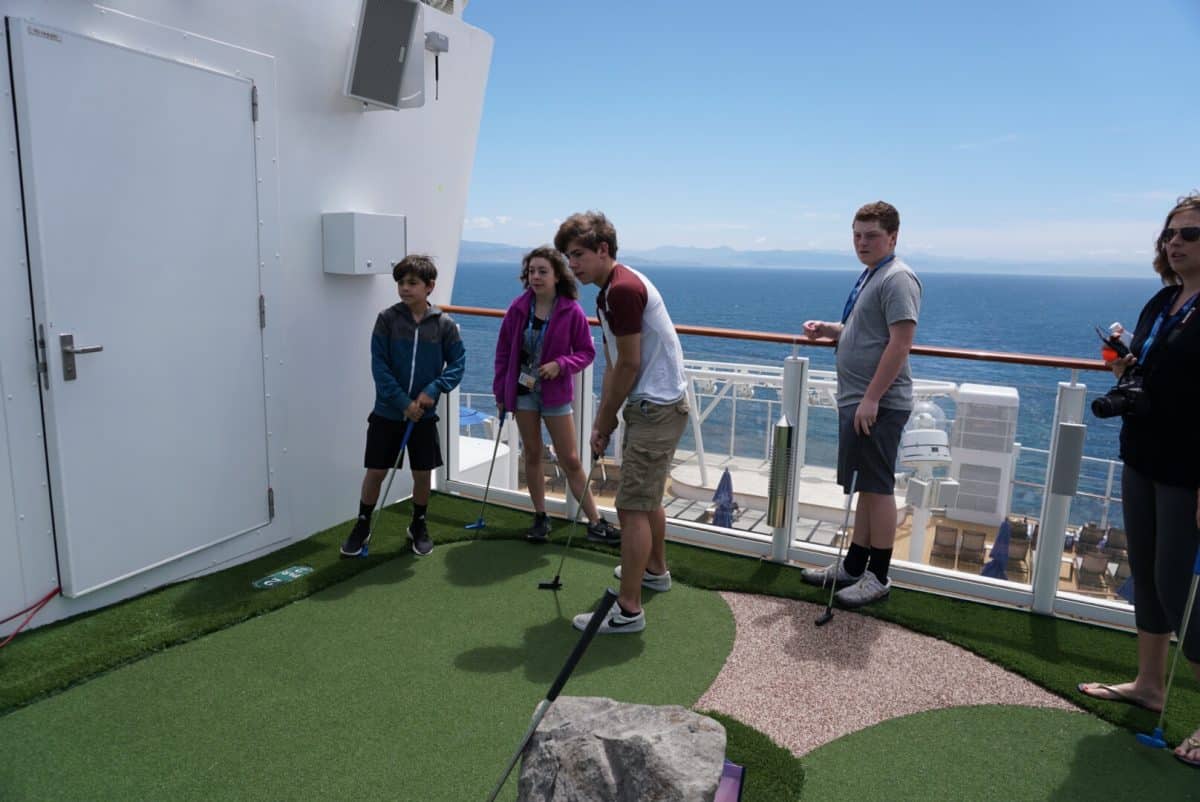 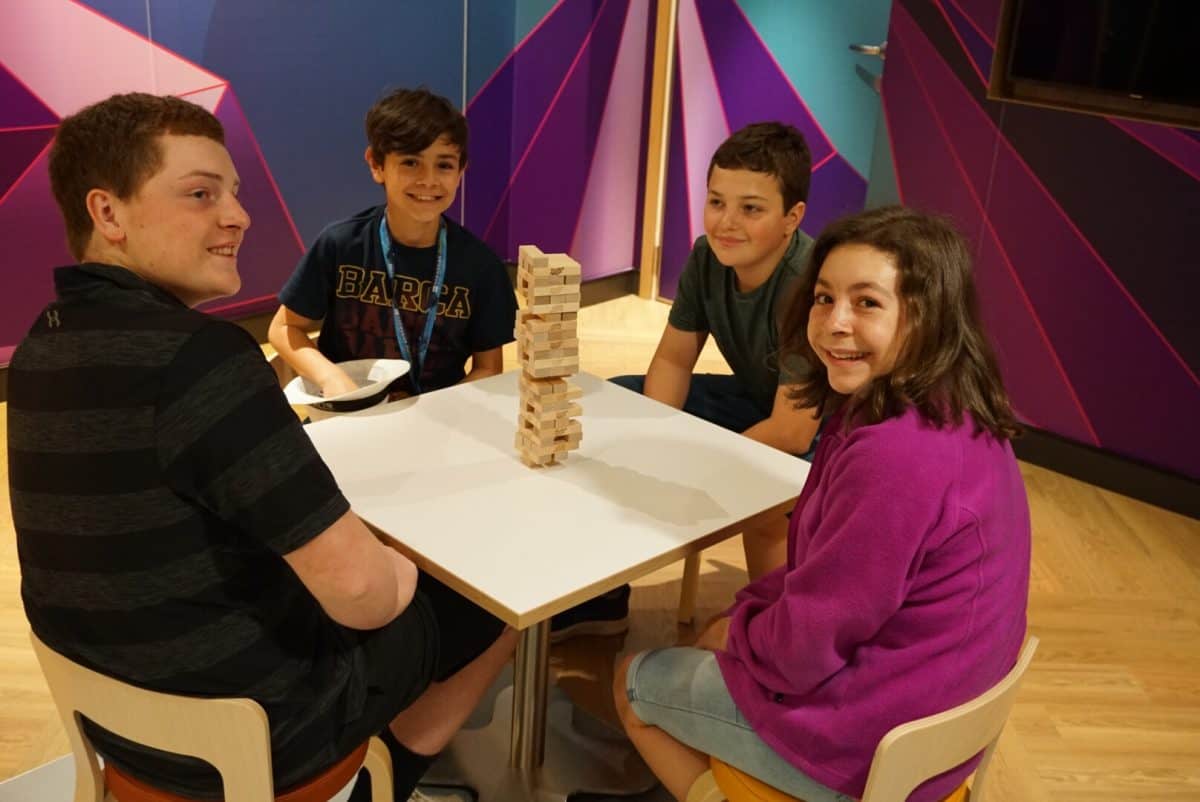 For little ones ages 6 months to 3 years old. Inside babies and toddlers can play, enjoy sensory play activities, and music for up to two hours a day. 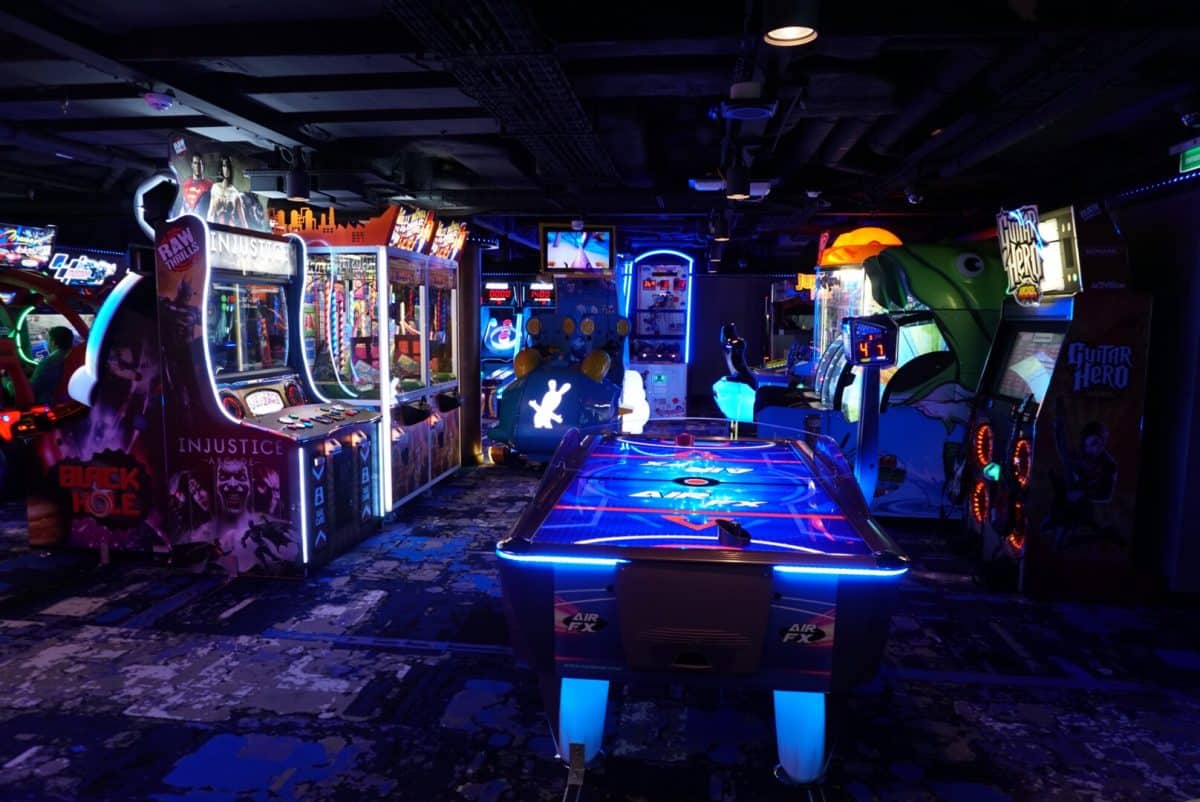 I was pleasantly surprised by the size of the swimming pools. Lets be honest, usually a pool on a cruise is not that impressive. Both of the pools on the Bliss were a decent size, one was around 5 feet deep and the smaller one was around 3 feet deep. 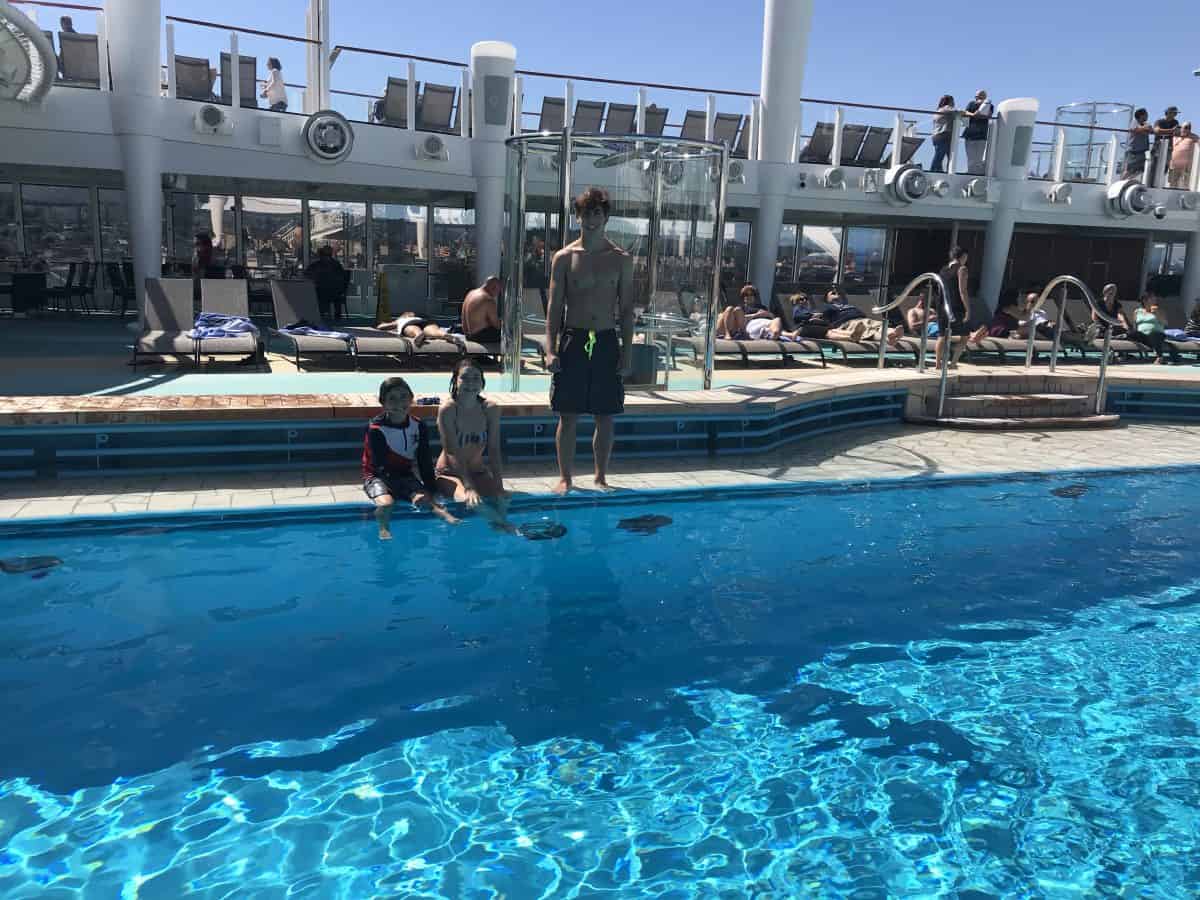 We are hot tub people and I appreciated there being hot tubs scattered around through out the decks on the ship. I saw at least six hot tubs while I was walking around. We always mangaged to find an empty hot tub or at least half empty. The servers walk around the hot tub area and take drink orders. 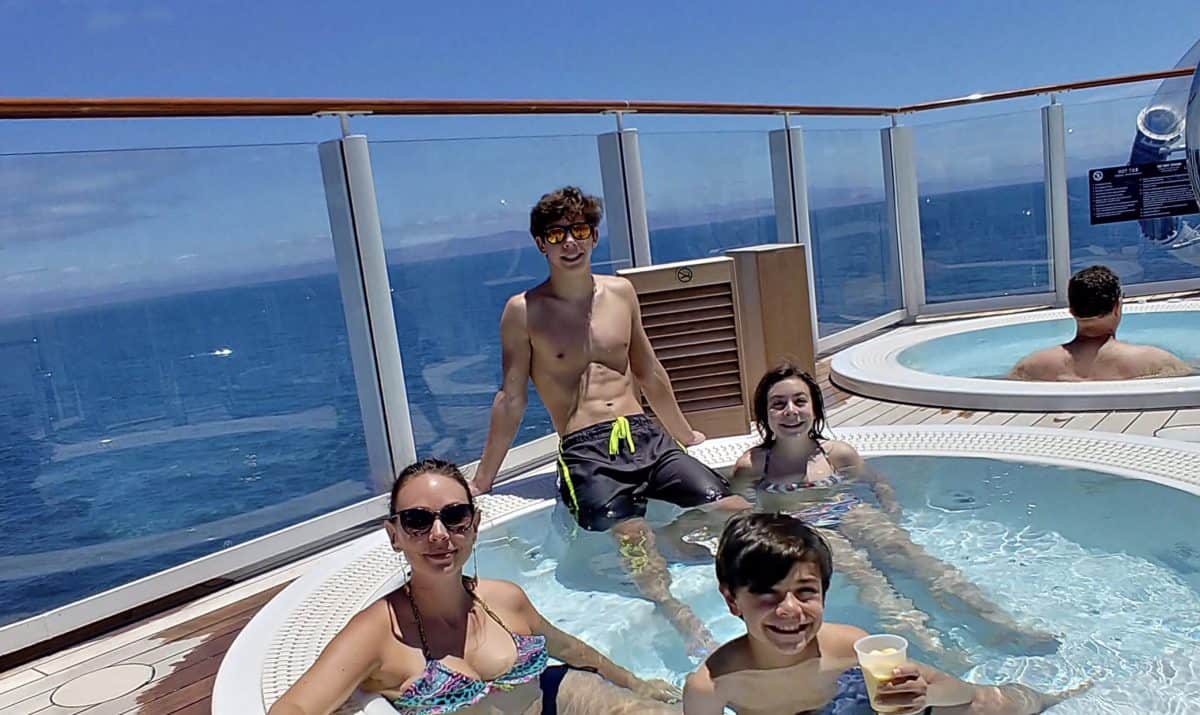 The Bliss has two water slides. One of the slides, the Aqua Racer, is a tube ride where you can race next to someone. The body slide is insane! It has one of those floors that drops out from underneath you and you go zooming down. 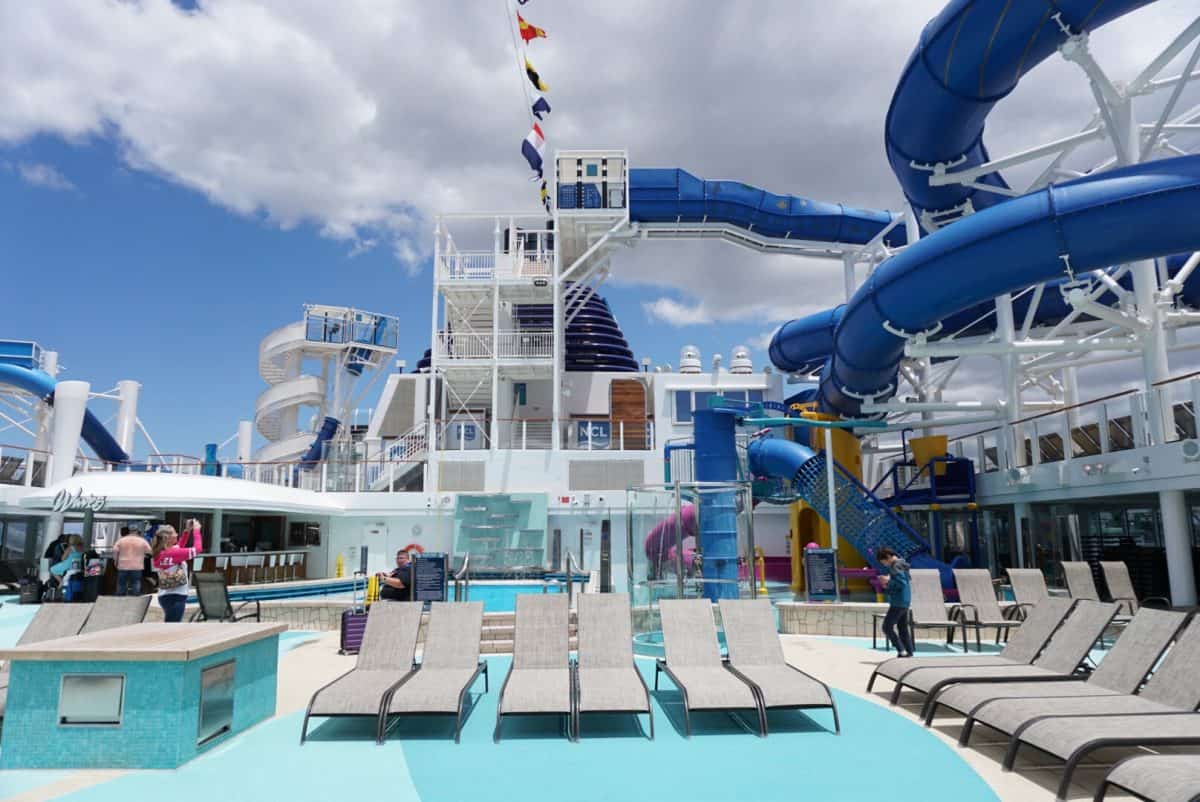 There is a water playground for younger kids with tipping buckets, water cannons, and slides. This is perfect for younger children, especially if the parents do not feel like getting into the pool. 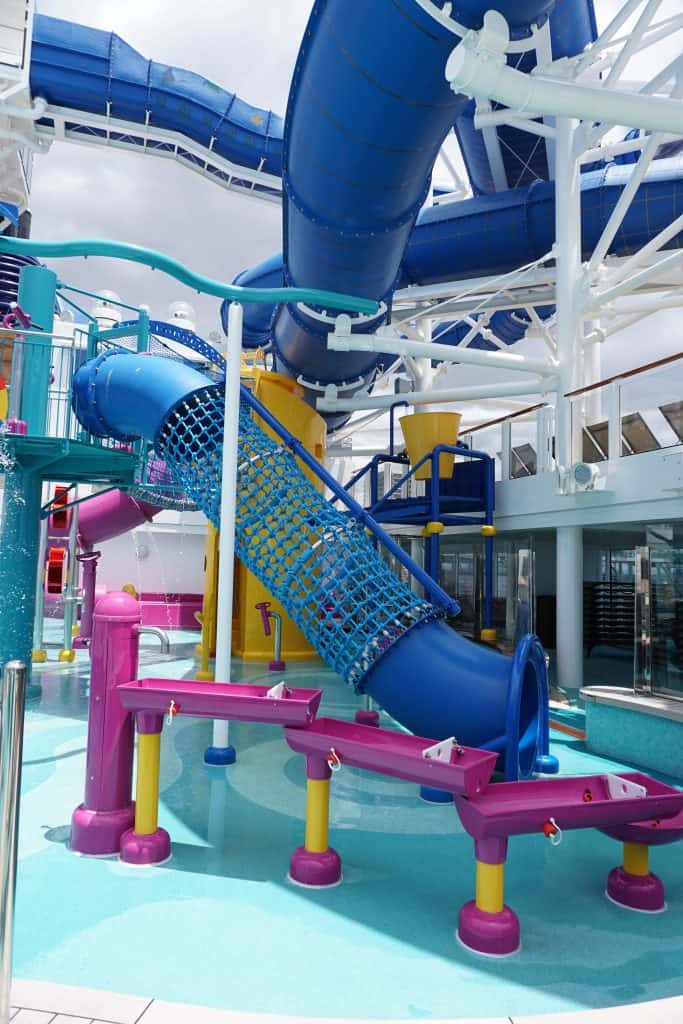 The Bliss has a two level race track and it is so fun. We went twice while we were on-board, because once just wasn’t enough. The cars go surprisingly fast. They are electric go karts. The go karts do cost extra, $9.95 USD Adult | $9.95 USD Children. 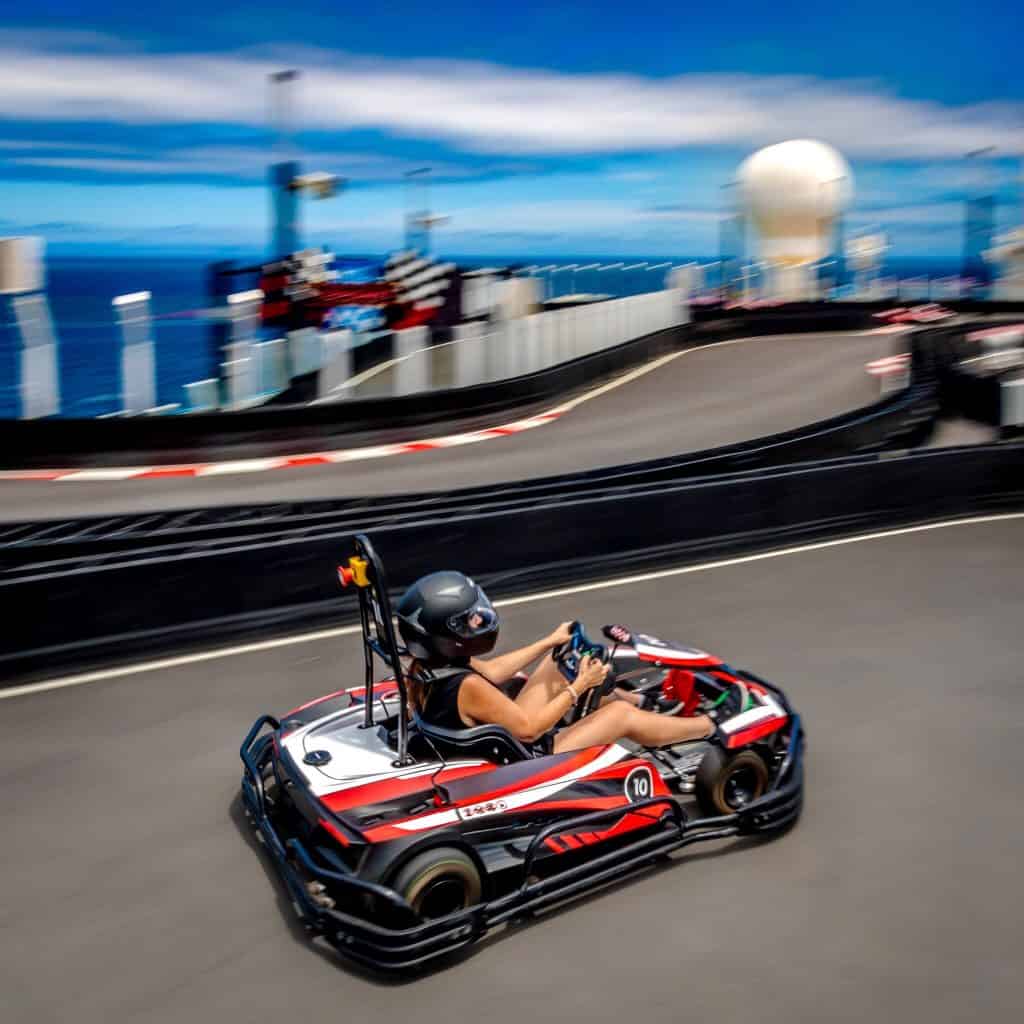 They have a great laser tag set up on level 20 of the ship. This is the first ever open air laser tag experience at sea on a North American based ship. The laser tag also costs extra, $5 USD per session. My kids had so much fun playing laser tag. They even have laser tag at night. 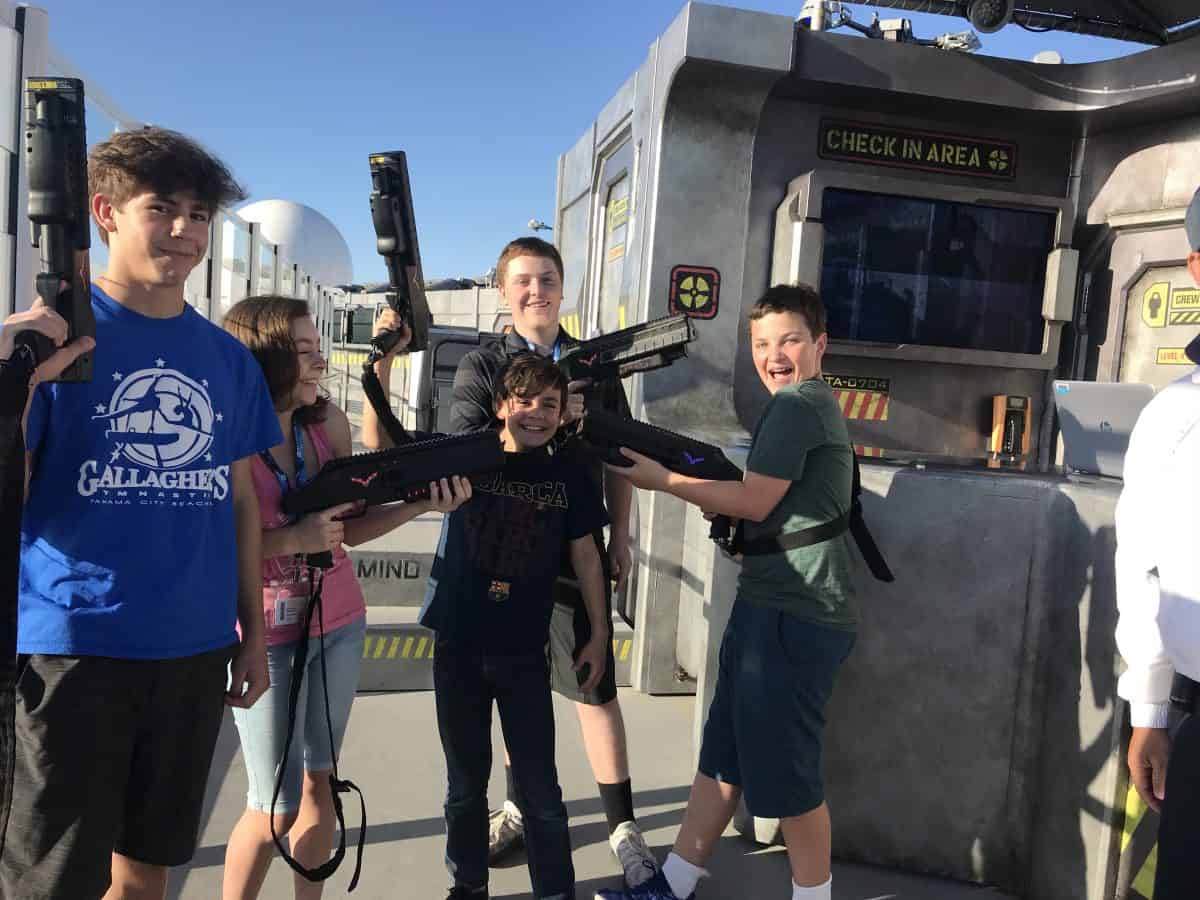 There’s even a place to bowl on board at The Local Bar and Grill. It’s old school bowling with small bowling balls and a ton of fun for families. There are only two lanes, so you may have to wait. As far as I could tell there was no extra charge to bowl. We just walked up and played. 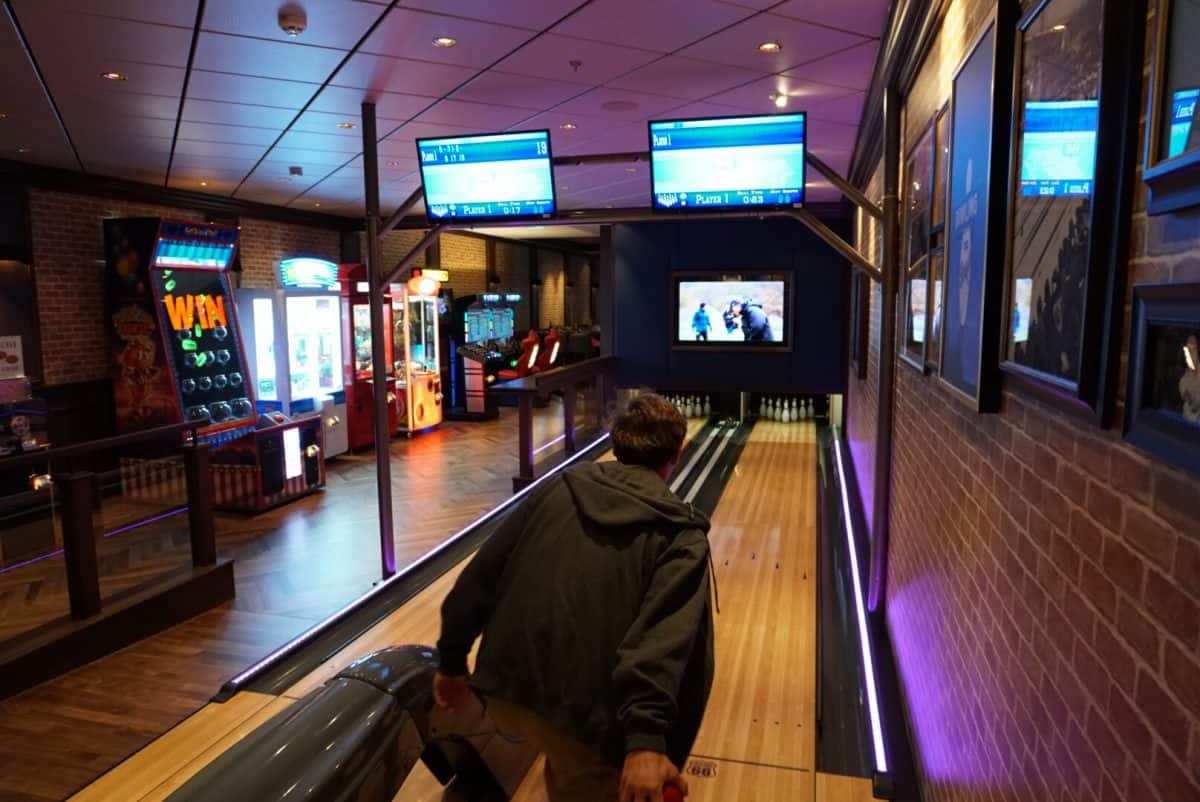 Lots of Fun for Adults Too!

There are also plenty of adult activities on the Norwegian Bliss as well. they’ve got gambling, spa time, shows, and more. And of course, the adults can participate in almost all the kids activities I listed above.

The casino has slot machines, and table games. There is a walled off area for smokers in the casino, but the rest is smoke free. 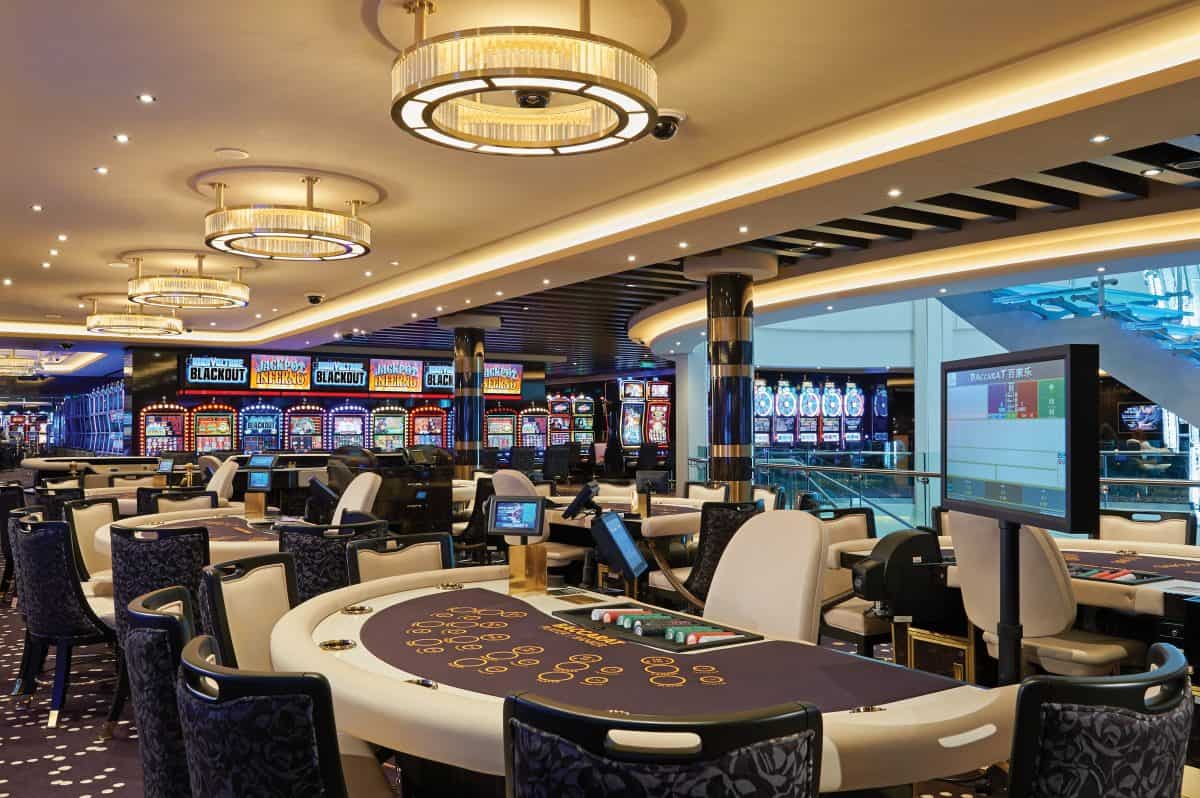 While we were on board Noah and Jonah both got in workouts at the fitness center. I never made it over there, but Noah said it was really good and large with lots of machines. I did see a separate room just for spin classes. They also have a TRX class and a fight club. Obviously, if I had known that there was a fight club I would have been all over that!

My friend Ava from Spa Travel Gal has declared the this the best spa at sea. I never had a chance to check it out myself, but I have seen some pictures and it looks absolutely outstanding! They have a snow room, salt room, steam room, and a dry sauna. 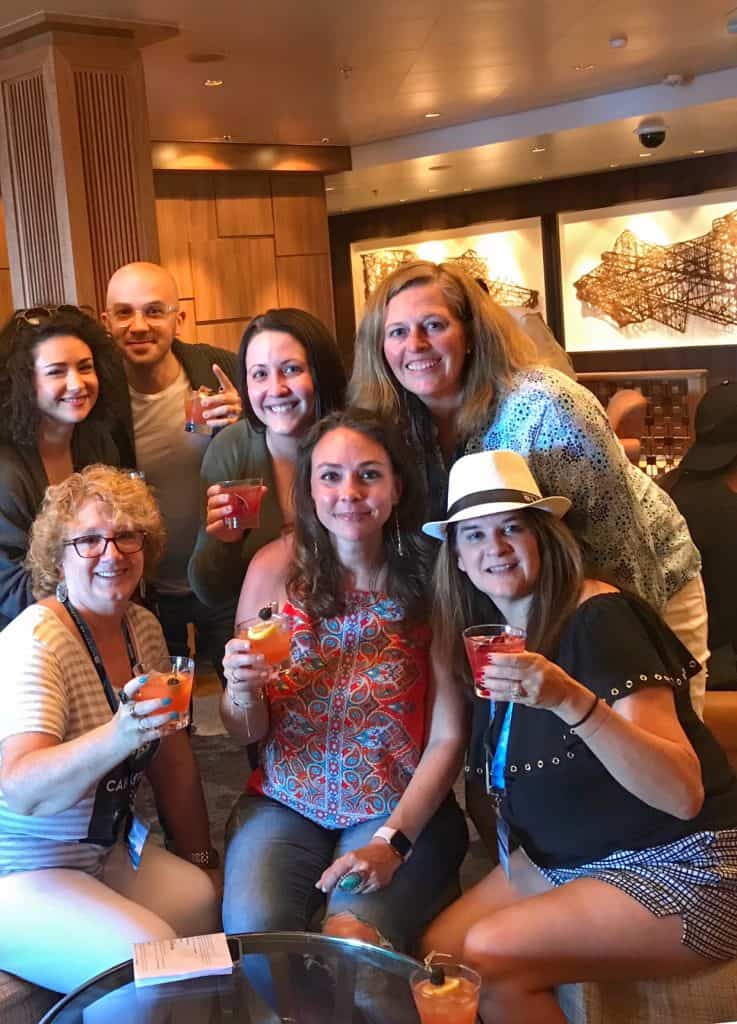 Going on a Norwegian Bliss Bar Crawl with Milk and Flowers, Joe’s Daily, Kid’s are a Trip, Wander with Wonder, Jina, and Points and Travel.

One of my favorite activities was going on a 2 hour bar crawl with my friends on deck 8.

The Norwegian Bliss has 16 bars, many of which can be found on deck 8. Here’s how to do your own on-board bar crawl to six bars.

Kick off your bar crawl at the A-List Bar with a Gunners cocktail. The A-List bar is named after Ady Stuart the president and CEO of Norwegian Cruise Line and the cocktail is a tribute to his favorite UK soccer team, Arsenal, whose fans are called Gunners. The Gunner cocktail is made with Tanqueray gin, cranberry juice, Fever tree tonic, lime juice, lemon, and juniper seeds. 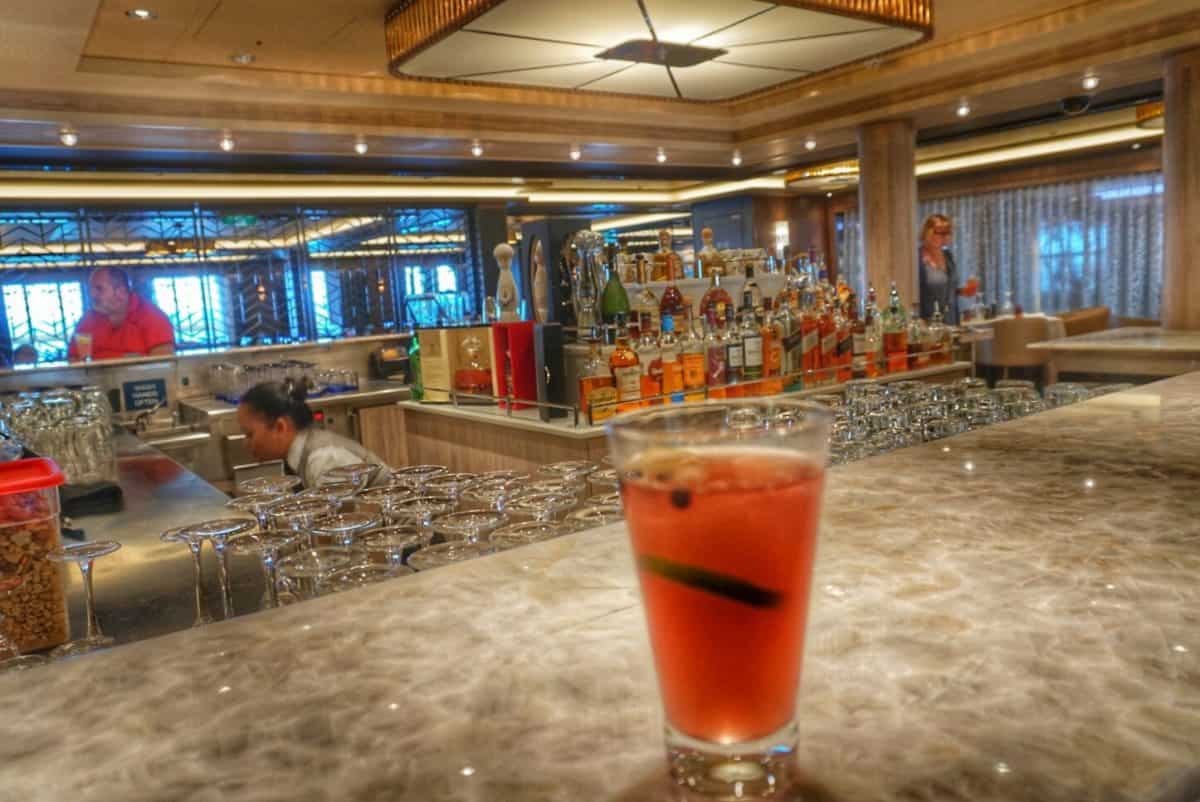 Next, stroll over to the Sugarcane Mojito Bar for a traditional Bacardi Mojito or a Saturn Landing. The Saturn Landing is made with Tanqueray gin, Velvet Falernum, Orgeat Monin, passion fruit puree, and lime juice. 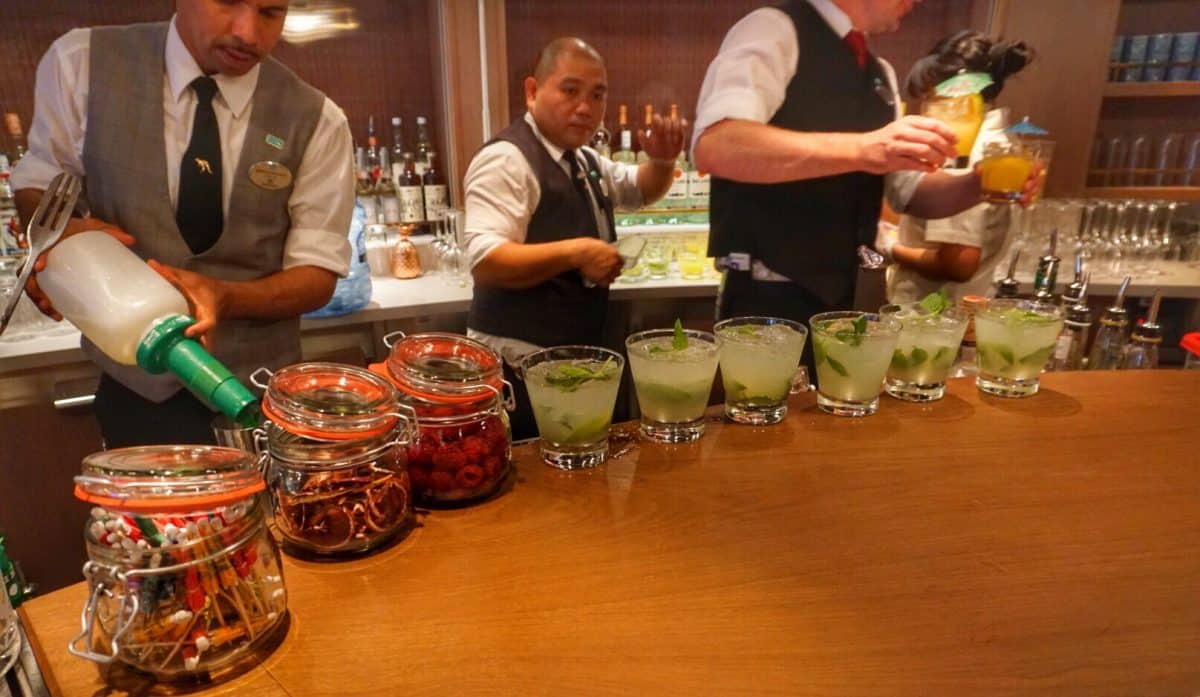 Once you’ve had your fill of rum head to The Cellar or The District Brewhouse. The Norwegian Bliss has a great wine bar where you can take a class or just enjoy a wine flight. They also have a great selection of craft beers at their brewhouse, including Wyland beer.

Your next to last stop is Malting Whiskey Bar where they have two excellent whiskey cocktails on tap, a Blackberry Bourbon Smash and Rye & Rum Sour. The Balckberry Bourbon Smash is made with Bulleit bourbon, cranberry, lemon elixir, and blackberries. The Rye & Rum Sour is made with Jack Daniel’s Rye, Captain Morgan rum, blood orange puree, orange, lemon elixir, and whiskey barrel ages bitter. 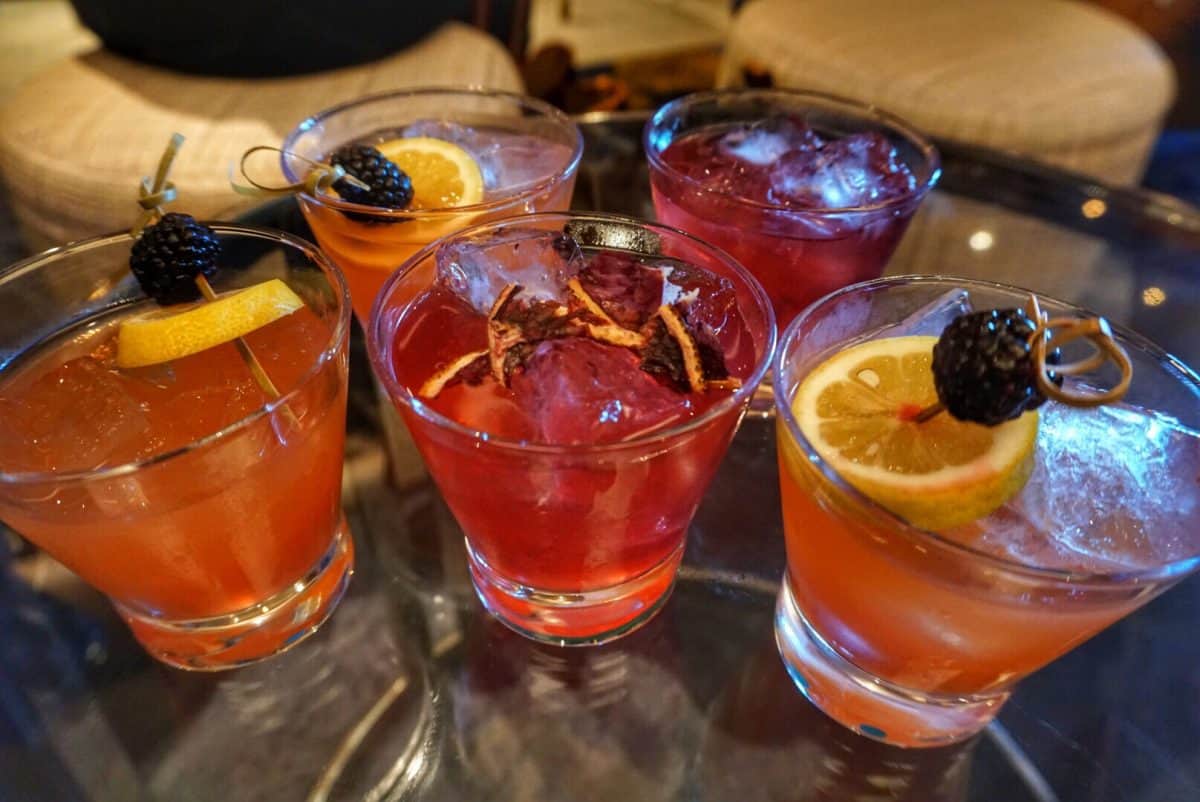 Finish off your bar crawl at The Cavern Club where you can enjoy a drink of your choice while a Beatles tribute band performs. Every night they perform from a different era. They are really good! 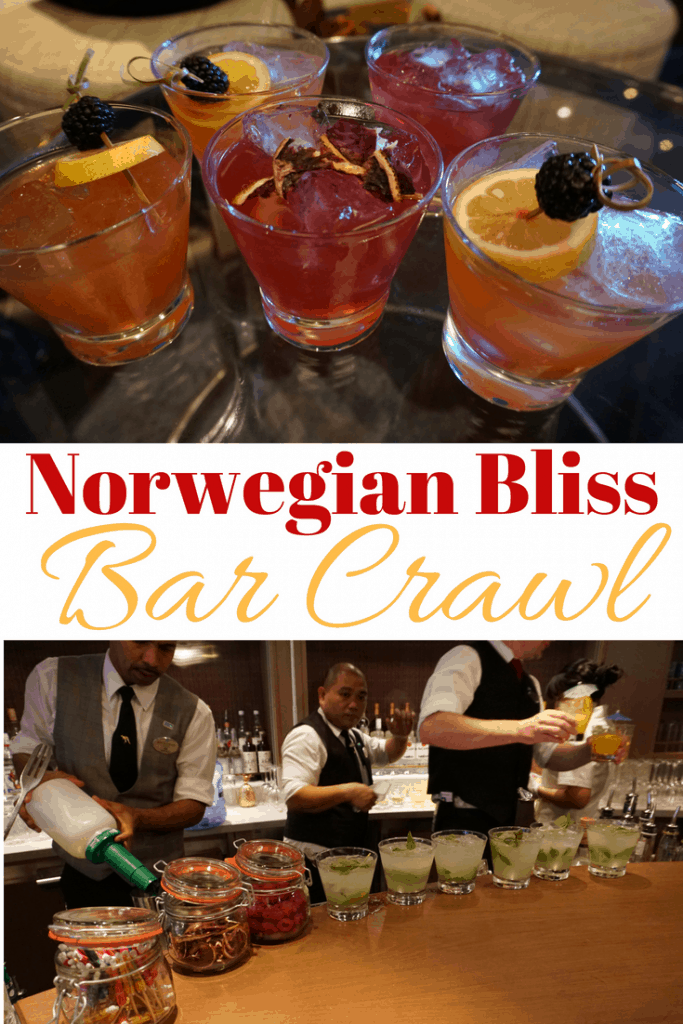 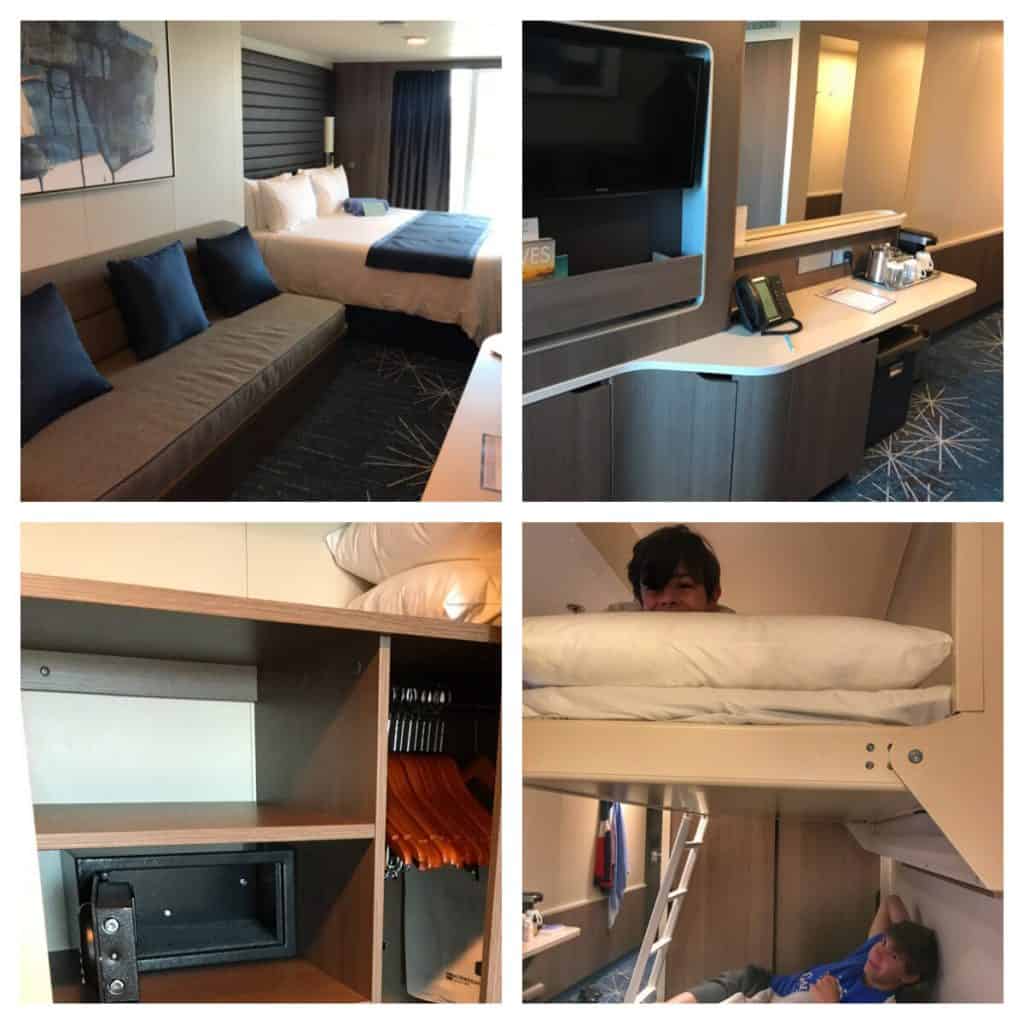 One of the toughest things about cruising for our family is finding a room that can accommodate us. In order to be able to get two rooms I have to have another person with me that is 21 years old. This means that I can essentially never get two rooms. We have to be able to squeeze into one room. The Bliss has lots of room variations.

Mini Suite – We stayed in a mini suite with a balcony. That is a photo collage of our room. It was tight once the couch was made into a bed and the bunk was dropped down from the ceiling, but it was still great.

The bathroom was huge and I am so irritated that I didn’t take a photo of it. There was a shower with six shower sprays, so that was fun. The room also had USB ports around the room, which was super handy.

You cannot take a clothing steamer with you on board, but they have an iron board and iron that they will bring you. Just call housekeeping to request one. My son always calls for an iron.

24 Hour Room Service – They offer breakfast, lunch, dinner or late-night munchies on the room service menu. You will be charged a $7.95 service charge everytime you get room service.

The Norwegian has more than 18 places to get food, including a fantastic buffet. My oldest teenager was a massive fan of the buffet, especially all the seafood they had on it. We did not have enough to try all the dining options, but we tried as many as we could. Most of the restaurants are included, but some cost extra. 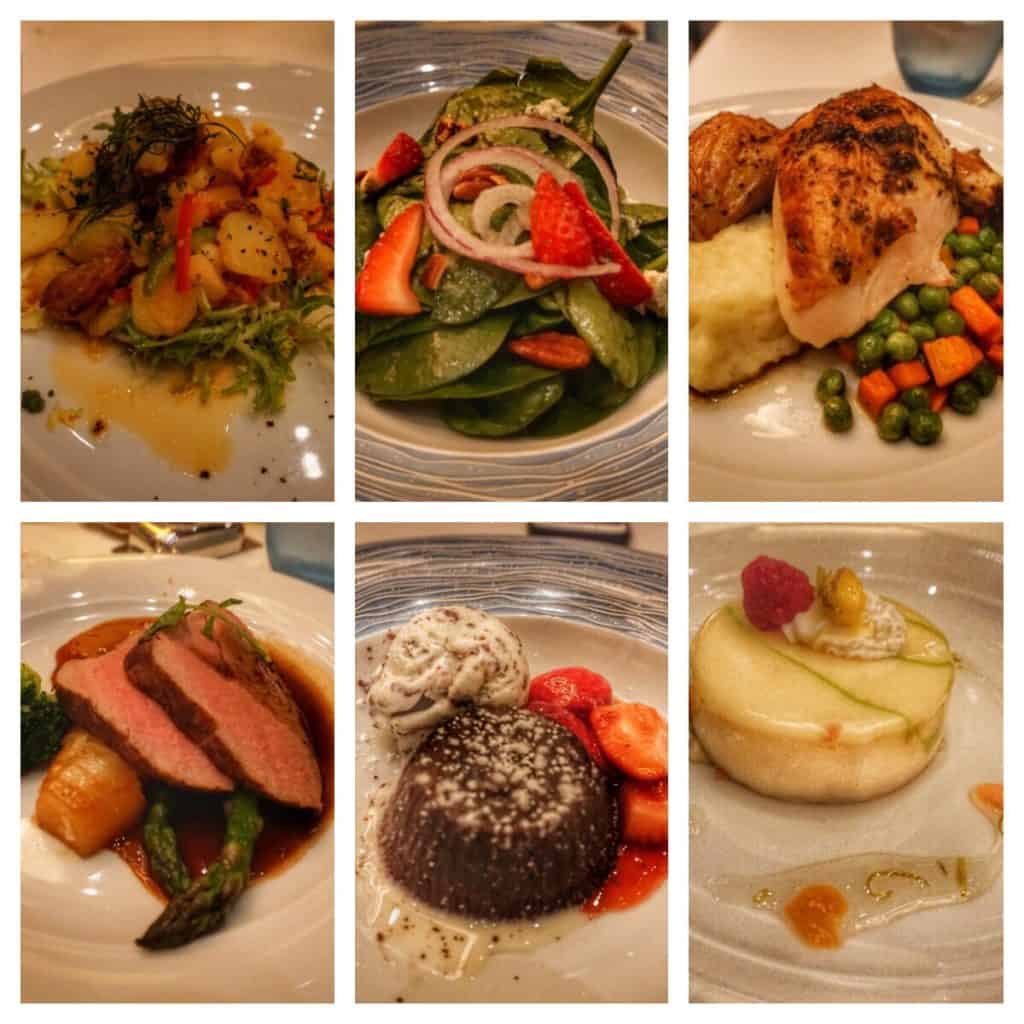 This was my favorite meal, the food was wonderful. The Manhattan Room is a two story restaurant at the back of the ship with large panoramic windows, so try to eat here while there is still daylight. If you struggle with motion sickness, you may want to skip eating here, it’s pretty bumpy in the back. You do not have to make a reservation to dine here. They take walk-ins. We walked in and didn’t even have to wait. 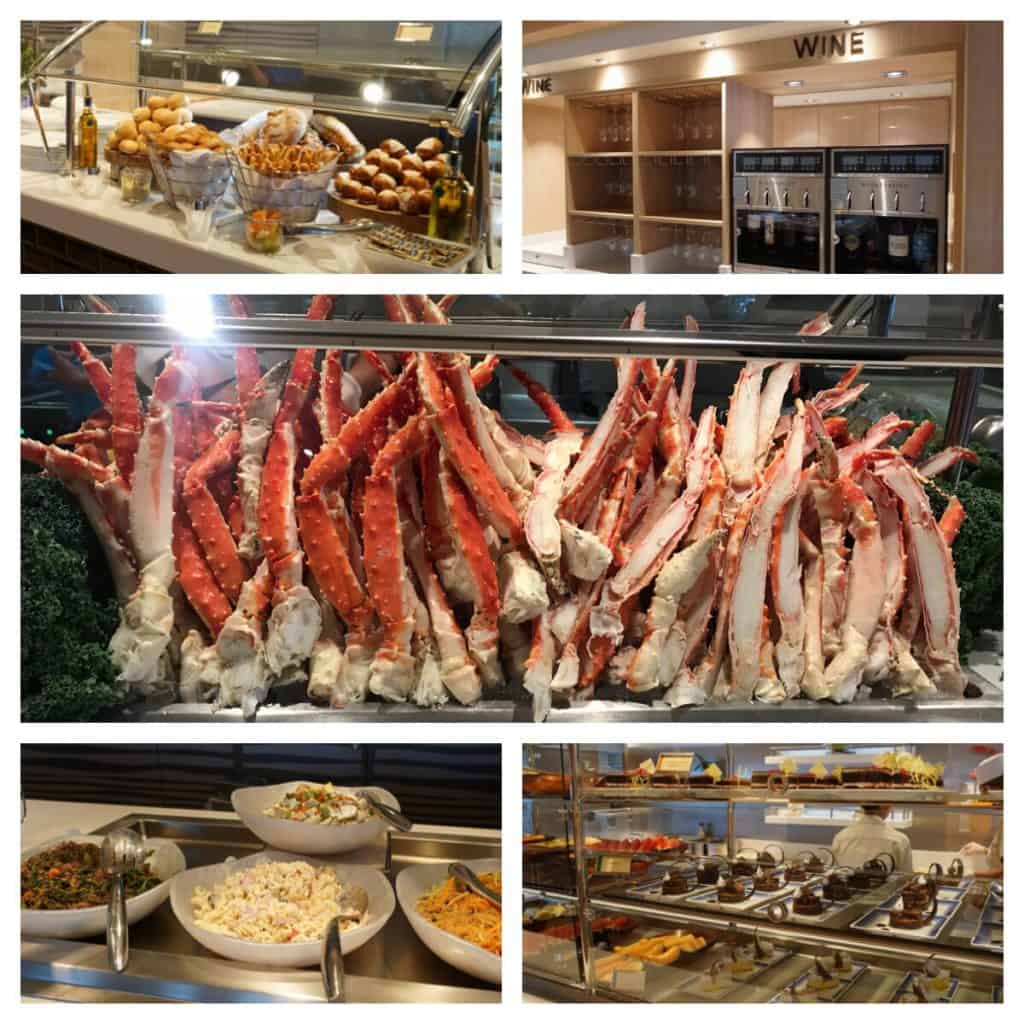 The Garden Cafe is the buffet restaurant and is open for breakfast, lunch, and dinner. We somehow ate here for all three meals and it was great every time. 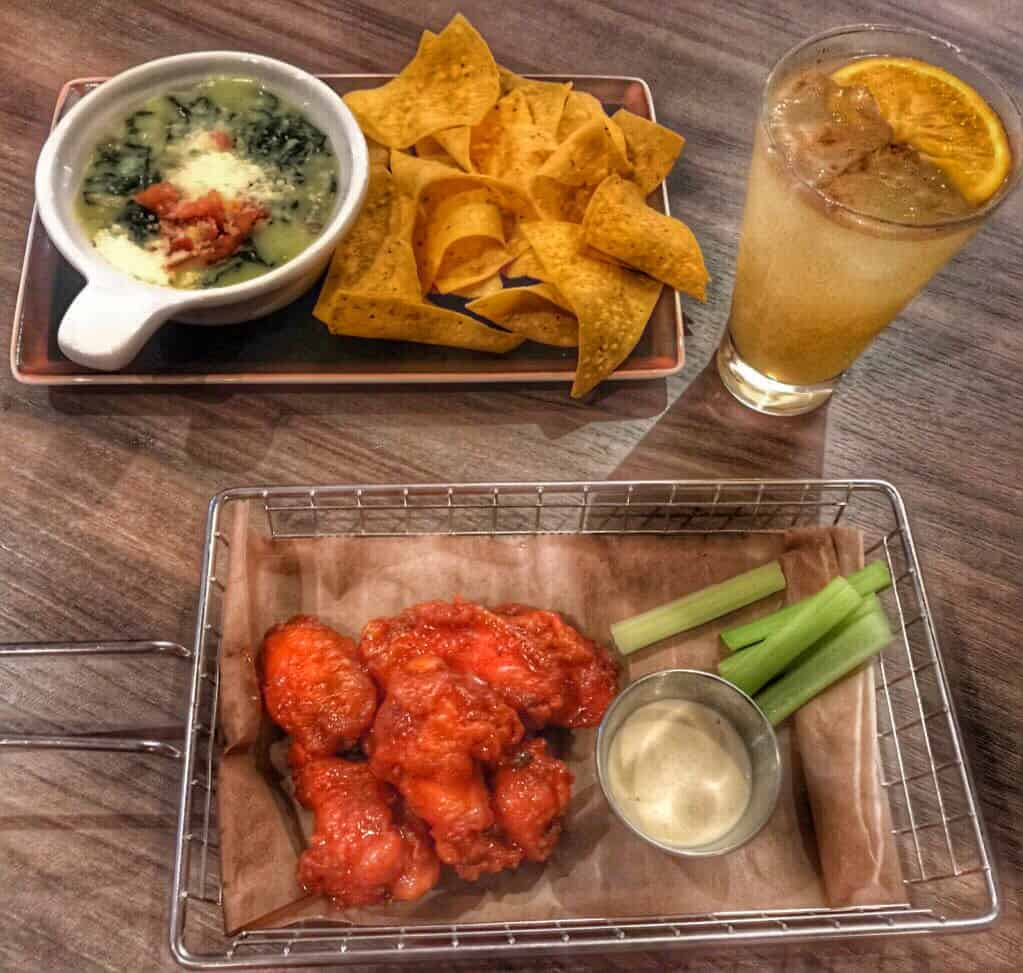 The Local is open 24 hours a day offering pub food and has a two bowling lanes. Pictured is our appetizers. I forgot to take photos of the rest of our food. They’ve got fantastic burgers. 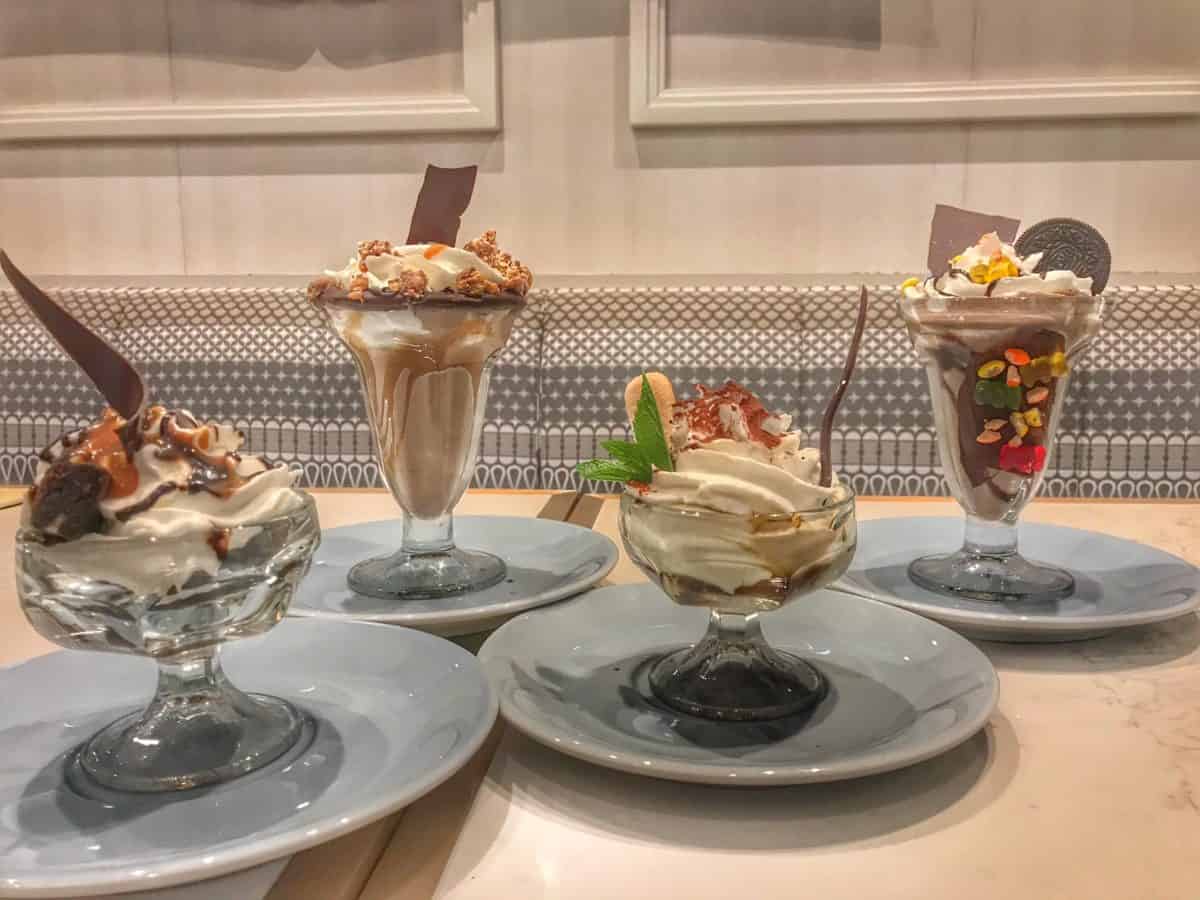 Coco’s has freakshakes and you know how the kids and I feel about milkshakes! They also have sundaes and other ice cream creations as well as chocolate treats. Coco’s costs extra. 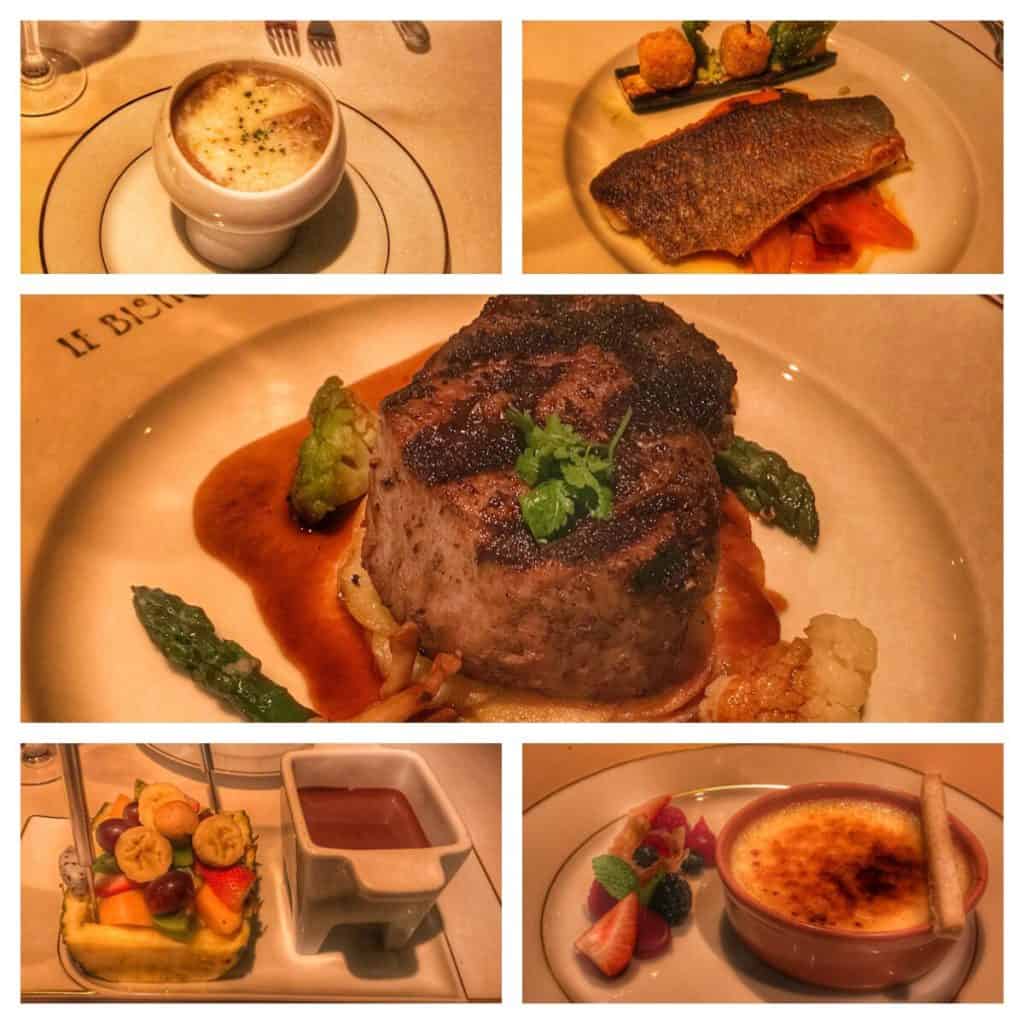 Le Bistro is a French restaurant that costs extra. It isn’t included in the price of your cruise. I personally would skip it. Although it was quite good, I like the Manhattan room more and it’s included.

There is alots of entertianment onboard. We were so busy doing the family stuff I missed most of these. They have a Beatles Tribute band that is amazing.

Here is a video I put together with an overview of the ship and our time on the ship. 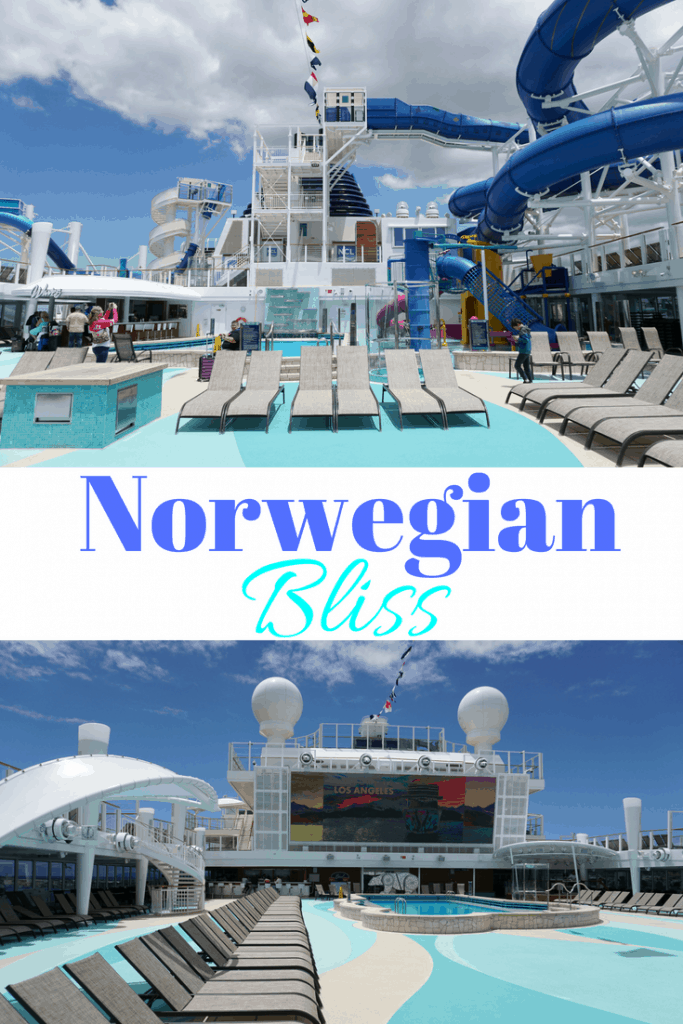