Off to Washington DC – Just me and my 3 kids!

Off to Washington DC – Just me and my 3 kids! 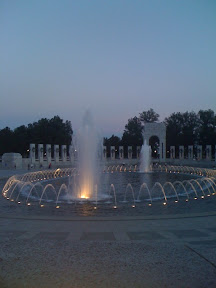 Last summer, before we relocated to Nevada and still living in Florida I decided to take my kids to Washington DC.

Originally I thought my husband would go to.  Unfortunately, about a month prior to the trip it became apparent he would be unable to go. I decided to push forward with the kid’s trip without him.  My kids did stellar in school last year and this was the reward I had been planning for them.  We drove!  That’s right, I drove 20+ hours in the car with all three kids one way just to do this and no I did not take ear plugs.  In case you were wondering, the kids do not like to ride in the car. 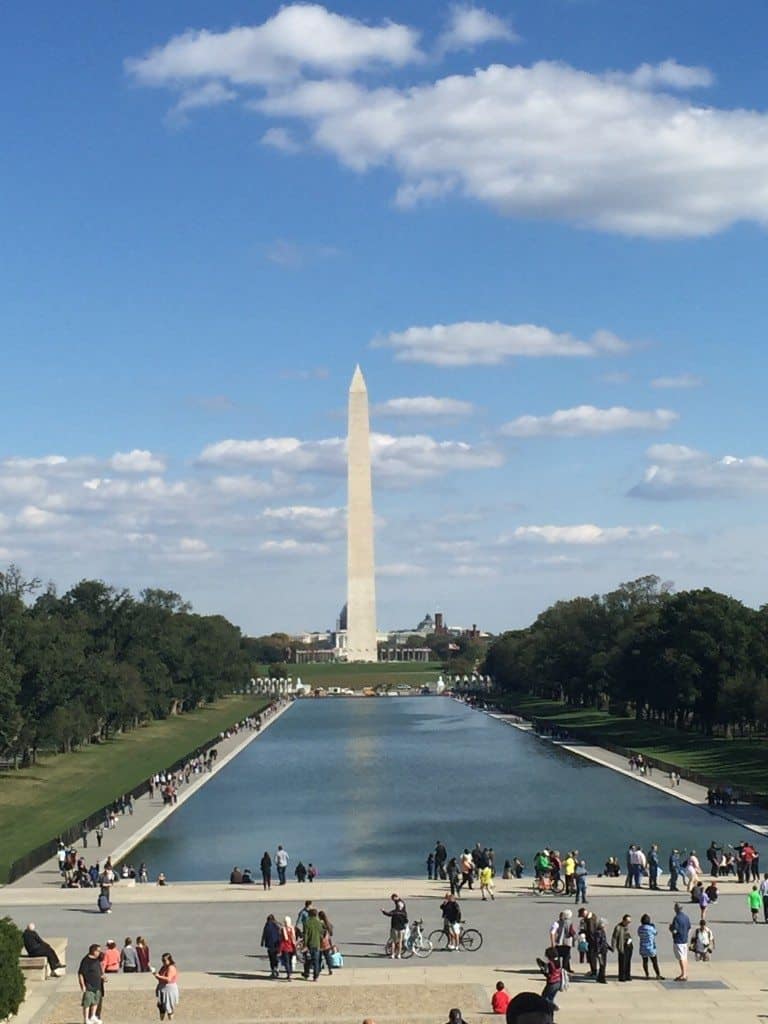 I had hoped to be at a hotel that was a little closer to all the monuments, but because I did not plan the trip far enough in advance there were not a lot of hotels available.  At least, not any that I could afford.  Luckily the week before we went Travelzoo.com ran a deal for $130 a night at The Melrose Hotel. When I checked in the kids were very exhausted and somewhat spun up after being in the car for 7/8 hours and the guy took pity on us, by upgrading us to a very lovely and spacious suite.  I do have to mention the hotel advertised themselves as close to several of the monuments, but after a mile walk from our hotel I felt as if they had exaggerated their proximity!

Here are the kids looking at the Reflecting pool, the Washington Monument and the Abe Lincoln monument.  The kids were all still in good spirits despite making them walk that far. 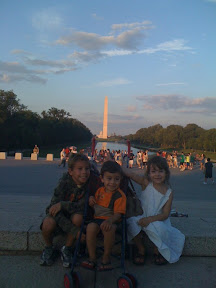 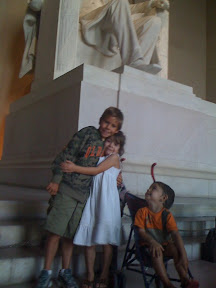 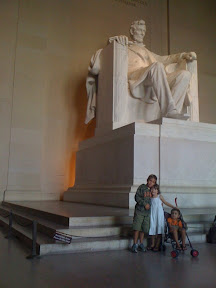 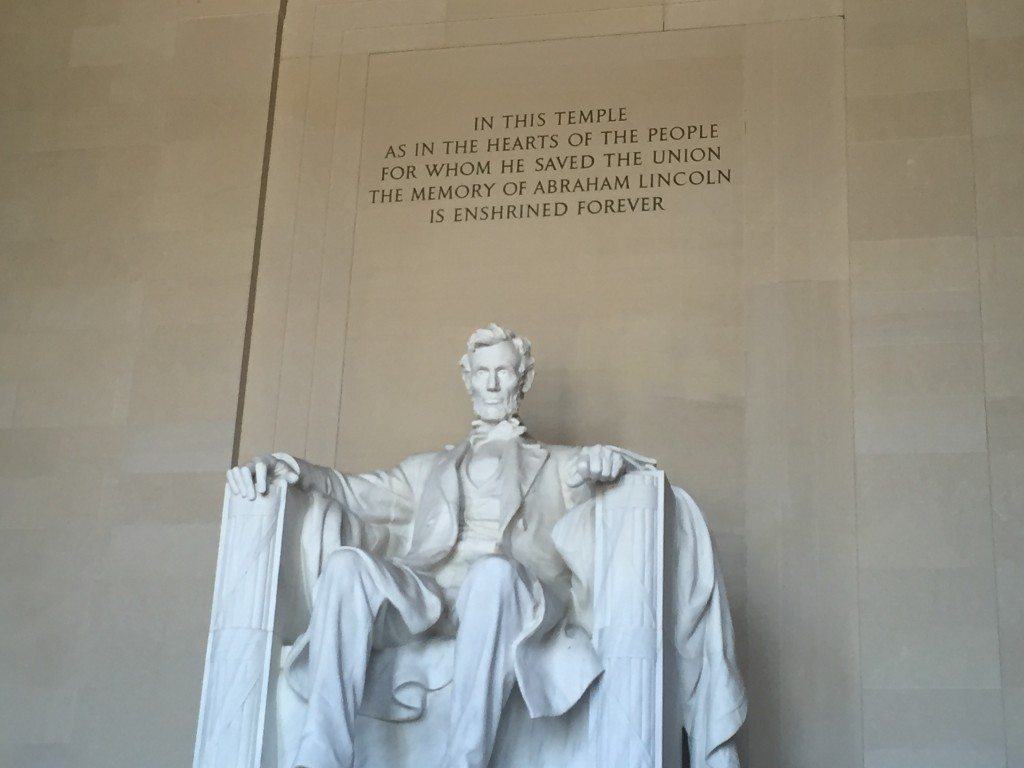 My son did not realize Abe would be so big.  Underneath Abe is an area where a museum is set up.  It is neat to look at and that is where the elevator is. 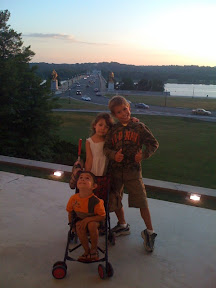 The kids are standing on the back side of the Lincoln memorial with the Arlington bridge in the background. This is the bridge that leads into Arlington cemetery where JFK is buried and many soldiers. It is also home to the tomb of the unknown soldier. 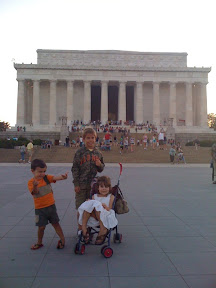 In front of the Lincoln memorial. Next we walked along the reflecting pool to the WWII memorial.  This is a long walk as well.  It doesn’t not look like it would take very long, but looks are deceiving. I was definitely wishing I have taken the double stroller instead of a single. 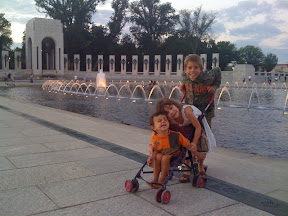 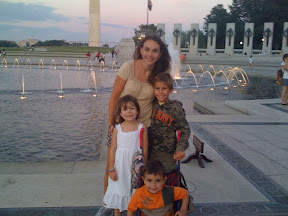 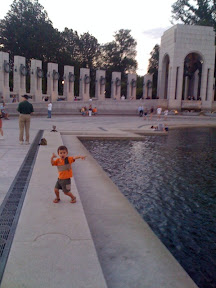 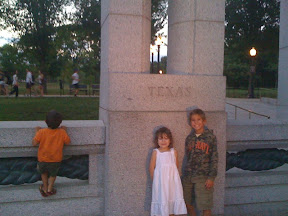 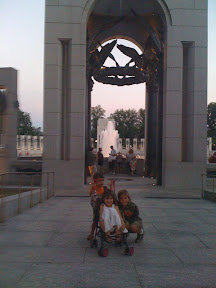 We only got this far the first day because it was getting dark. We had a little over a mile long walk back to the hotel. I ended up pushing Eden in the stroller and carry Jonah on my back!  It was a long walk.  We took a different way back to the hotel and much to my delight about 10 minutes before we got to the hotel we passed a subway station.  The next day we rode the subway!  I sure wish the guy at the hotel had mentioned it was such a short way away when I ask where we should go first.  Oh well it was worth the walk.

Our next day in D.C. was still alot of walking but a lot less than the day before since I found the subway station near our hotel.  That morning we started out by getting on the subway and getting off at the subway stop behind Congress so we could walk over to the Supreme Court.  This first picture is us headed to the court, but stopping in front of the library for a quick picture.  I heard after we had already left that the National Library is very impressive and something worth seeing.  I didn’t know so we just walked by. 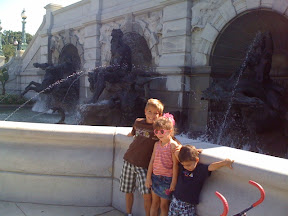 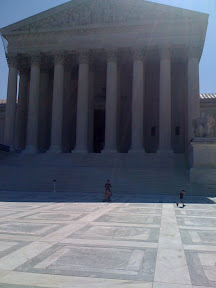 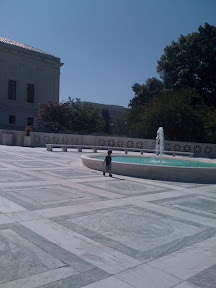 Inside they have two stair cases like this.  We walked around looking and ate breakfast in the cafeteria there.  (I don’t recommend) 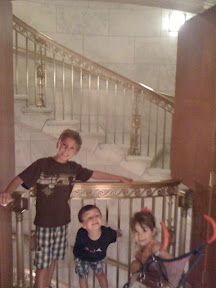 I had hoped to get on one of the tours that they do in the court room, but we missed it by a few minutes and the kids weren’t terribly interested in staying longer just to go in the court room.  I went in on the tour about 7 years ago and it was very interesting.  It’s by far the best part of going there.

Once we were done at the Supreme Court we crossed the street and were at the back of the Capital building. This is actually the side your enter on for your Capital tour. 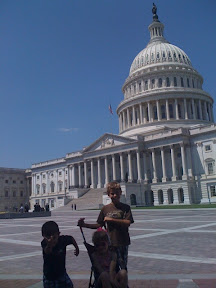 It takes a good while to walk all the way around it! 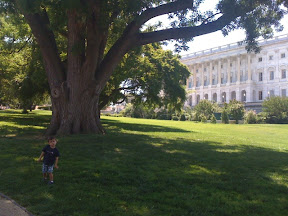 Unfortunately, while we were there this was as close as you could get. Used to, you could walk up the stairs, but this time they were closed to the public. I saw a sniper up there trying not to be noticed! I do not know why, and maybe this was just happening the week we were there. 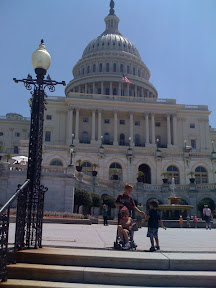 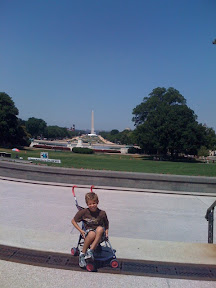 We did stop briefly at the National botanical gardens. I was hoping to go inside, but the kids were not up for it.  It looked really awesome in there, but it was quite hot. I think they could have made it through there if I had just brought more water with us! 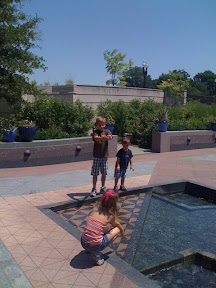 This is outside the botanical gardens.  It was such a hot day I let them get pretty wet.

The FDR Memorial in Washington D.C. is a lovely memorial with multiple waterfalls.  It is closer to the Thomas Jefferson monument than the White House.

Make sure you pick the right side of the National Mall to park at, because otherwise you will be walking a ton to get there. I know because I made this mistake!  Study a map and how everything is laid our before you go to D.C. I really did a lot of walking because I didn’t not do this simple thing. 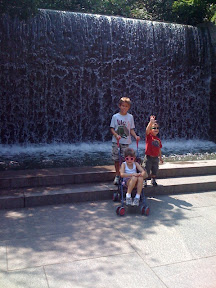 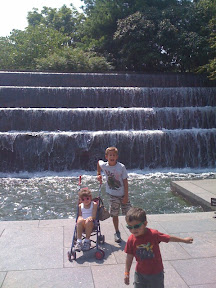 The waterfalls are intended to symbolize the increasing chaos surrounding FDR’s presidency, marked by the Great Depression, World War II, and Roosevelt’s death in 1945. 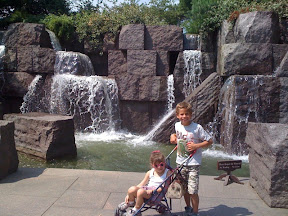 Like most things in Washington D.C. it is completely free to walk through the Franklin Delano Roosevelt Memorial.
2019-10-27T18:04:48-07:00By Meagan|Categories: Washington DC|0 Comments