Utah is a nature lover’s paradise. With five national parks (only California and Alaska have more), multiple national monuments, several state parks, and a seemingly endless amount of public lands, it can be hard to narrow down which places belong on your bucket list. But the good news is that the national parks known as “The Mighty Five” are all relatively close together, which makes it possible to visit them all at once over the course of a week, although you could easily spend much more time exploring the parks and surrounding areas. Without further ado, here’s our one-week Utah National Parks itinerary with the top things to do.

Quick tip before you embark on this journey: since you’ll be visiting multiple national parks, make sure to buy the America the Beautiful national parks pass. It only costs $80 and will save you money over paying individual entrance fees at each park.

Day 1 – fly into SLC airport and drive to Zion

There are two airport options if you’re visiting Utah’s national parks from out of state – Las Vegas or Salt Lake City. The drive to Zion is shorter from Las Vegas but the return drive from Moab is much longer. The best option is to fly into SLC and drive south on I-15 towards St. George. If you have more than a week, there are lots of great things to do in St. George, like renting a UTV and riding on sand dunes or boating and cliff jumping at Sand Hollow State Park. If you’re only interested in seeing the best of Utah’s national parks, then head to Springdale and stay the night. There are lots of lodging options, from Marriott hotels to campsites to glamping resorts. 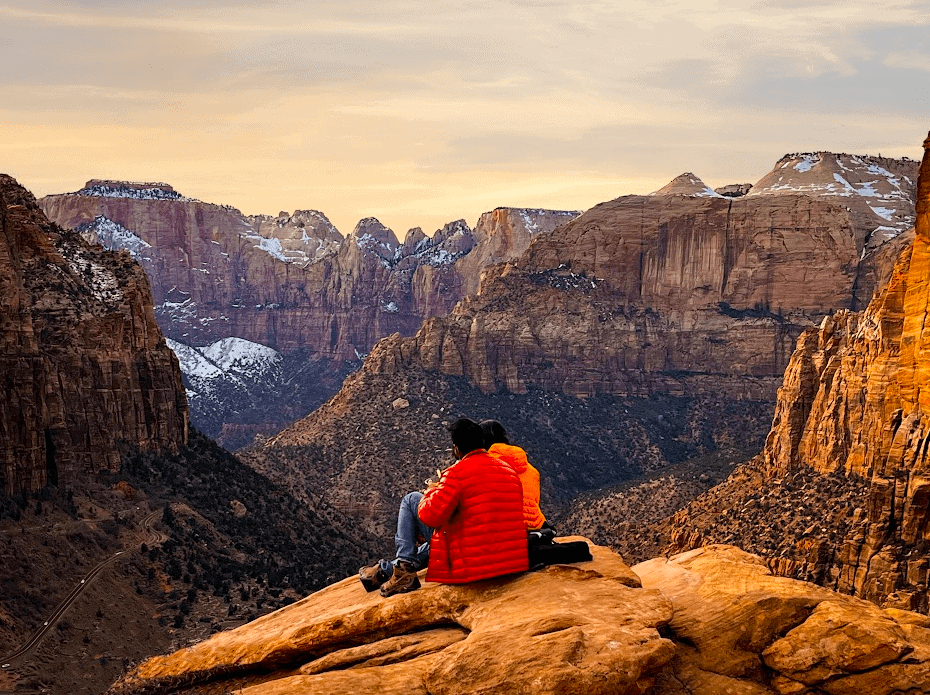 Five million people visited Zion in 2021 but don’t let that stop you from visiting. It’s one of those places that’s popular for good reason. Plus, if you want to enjoy the park with fewer people just avoid the summer months. Zion has a shuttle system that makes it very easy to see the park’s highlights. There are nine different stops, so you could easily spend the day just hopping on and off the shuttle to see the sites or you could do some longer hikes like the Emerald Pools or the Narrows.

One hike in particular, Angel’s Landing, has gotten so popular that Zion instituted a permit system in 2022 to limit crowds. This is definitely a bucket list-worthy hike but it’s not for the faint of heart. Towards the top of the steep 4.4-mile trail, there are steep drop-offs on the other side of you. There is a handrail for safety but even so, people have died here. Your daring efforts will be rewarded with incredible views of the soaring Zion cliffs and valley below. But if that doesn’t sound enticing, there is an easier alternative. Zion Canyon Overlook is an easier 1-mile round trip hike that offers similarly stunning views without the adrenaline rush.

After a long day of shuttling around and hiking, spend the evening back in the town of Springdale where there are lots of shops, gem stores, art galleries, and restaurants. 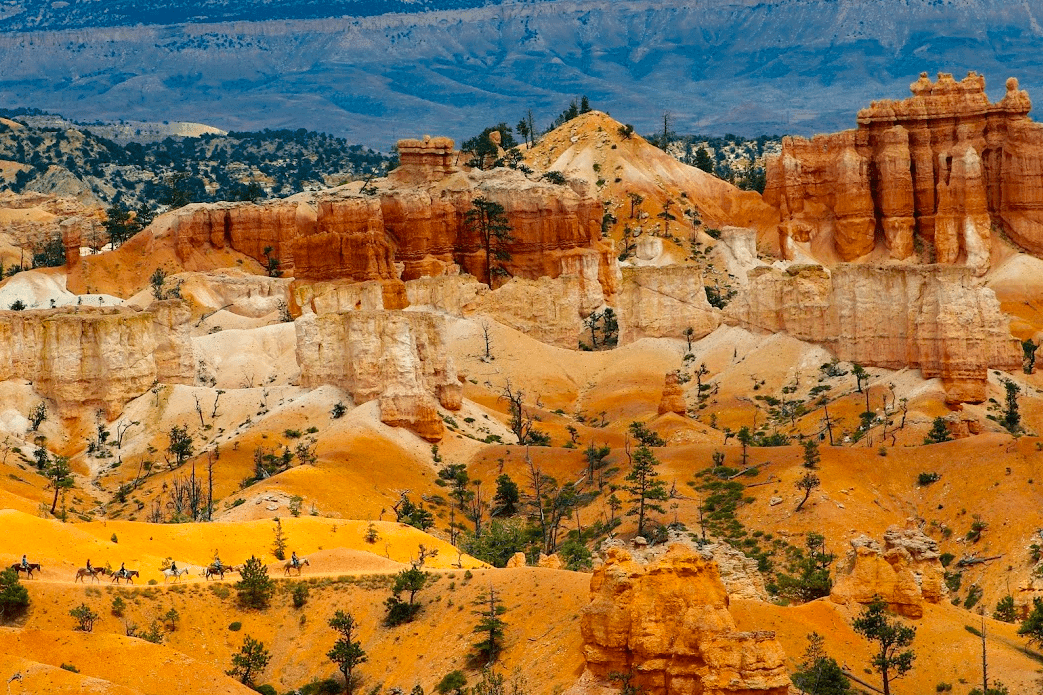 Bryce Canyon National Park is located around 90 minutes from the East entrance of Zion, so you’ll want to get an early start to your day. But the good news is the drive is incredibly scenic and takes you through the Mt Carmel tunnel – a 1-mile tunnel under the Zion cliffs. Stop in Mt Carmel Junction for breakfast at the famous roadside diner, Thunderbird Café.

You’ll spend the rest of the day exploring the bizarre hoodoos of Bryce Canyon. If you’ve never heard of a hoodoo, they’re essentially huge limestone pillars with an orange hue. The coolest way to experience the uniqueness of the hoodoos is to take the Navajo Loop trail and hike down into the natural amphitheater. You’ll traverse steep switchbacks and pass by famous features like Wall Street and Thor’s Hammer. These unique sights are what make this one of the best hikes in Utah. It’s only 1.7 miles so you’ll have time to try other adventures, like horseback riding with a guided tour.

Don’t wear yourself out too bad, because you’ll want to stay awake for the out-of-this-world stargazing. Rangers offer nightly sky programs and you’ll be able to see the Milky Way with the naked eye. For lodging, Ruby’s Inn is a great option with a nice rustic vibe that makes you feel like you’ve traveled back in time to the Old West. It’s now owned by Best Western, but it’s been around for over a hundred years. 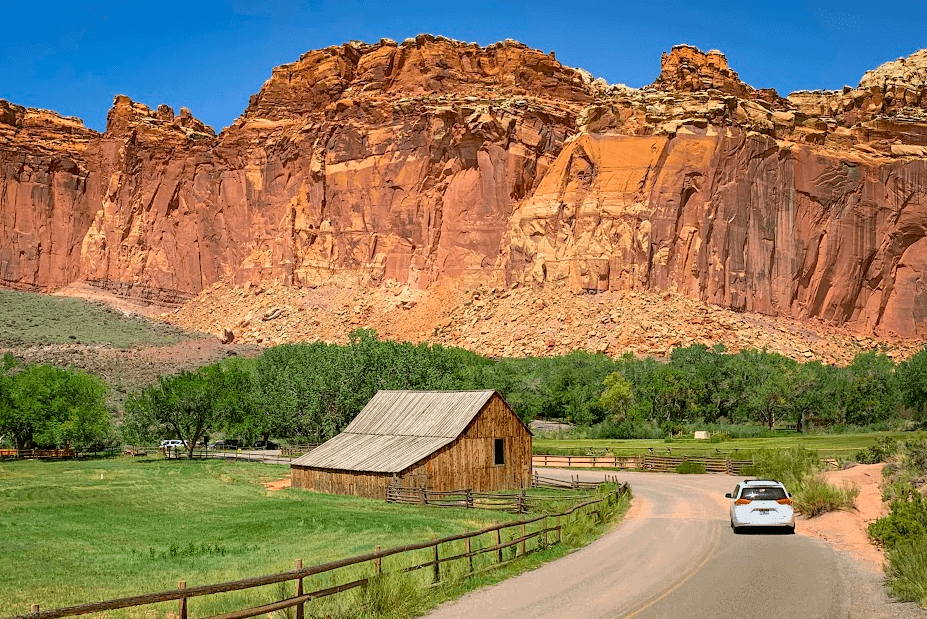 One of the best parts about this Utah national parks itinerary is the driving in between parks! You’ll get to go on some very scenic drives, but Highway 12 between Bryce Canyon and Capitol Reef is considered one of the best in the country. If you have more time to explore, you could easily spend a couple of days exploring the vast Grand Staircase-Escalante National Monument and its many slot canyons and other landmarks.

For now, go spend the day in Capitol Reef National Park, which is probably the most underrated of the Mighty Five. The best part about this park is the mix of ancient Native American and 1800s pioneer history. Start your day by checking out the petroglyphs left by the ancient Fremont people as well as the historic buildings built by Mormon pioneers. Then head over to the Gifford Homestead, where you can walk through fruit orchards and order some fresh-baked pie inside an old pioneer cabin. Don’t wait until late in the day because the pies always sell out. Work off that sugar rush by taking another hike – either Cohab Canyon, Cassidy Arch, or Hickman Bridge.

In keeping with the history theme, try glamping at the Capitol Reef Resort in Torrey, where you can choose from sleeping in a Native American-style teepee or a Conestoga-covered wagon.

You’ll end your trip by spending two nights in Moab, where you get two national parks near one small town. Oddly enough, one of the parks is so busy that it is now requiring reservations in order to manage crowds and traffic while the other is the least visited national park in Utah. But Canyonlands is worth a visit if for no other reason than it’s a great national park to escape the crowds. It’s actually a massive park and most of it is inaccessible to the average person unless you’re willing to do some serious backcountry adventuring. Don’t worry, there are still many landmarks that are easily accessible. Mesa Arch is easily the most famous one, especially if you remember the Windows 7 wallpaper from over a decade ago. Ever since then, photographing the arch at sunrise has been somewhat of a right of passage for photographers so that is one particular place and time that you will have to deal with crowds and fight for a spot among the throngs of photographers and their tripods, but it is worth it.

After waking up early for a sunrise hike to Mesa Arch, head back to the adrenaline junkie’s mecca that is Moab. Take your pick of adventures that day, whether it’s whitewater rafting on the Colorado River, mountain biking Slick Rock or Porcupine Rim, or four-wheeling in the desert with a Jeep or UTV. Just check out one of the outfitters in town for a guided tour. You’ll definitely want an expert along for the ride. 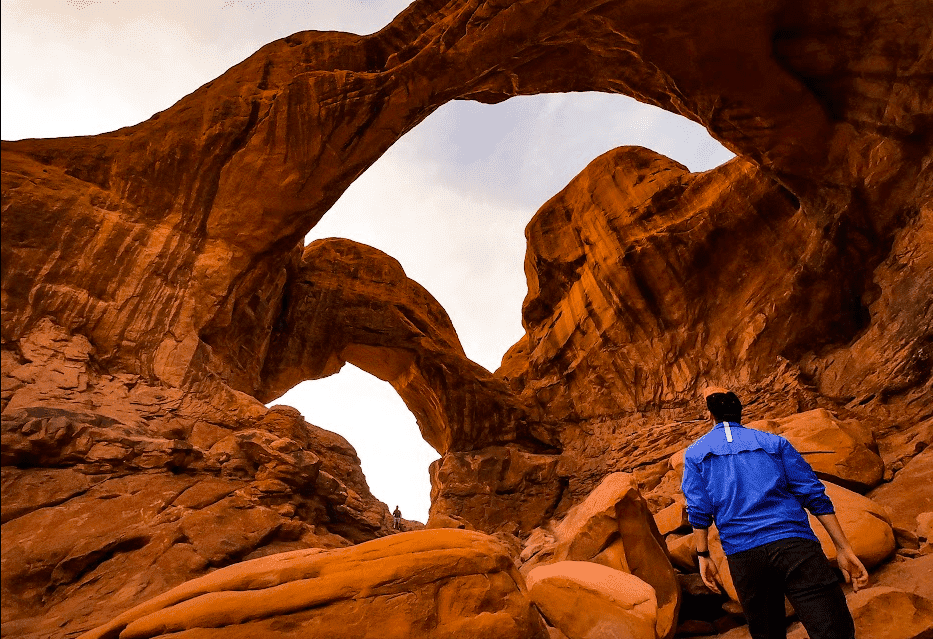 Arches National Park has over 2,000 natural arches, but some of the best hikes at Arches are easy and can all be done in a single day. There’s Double Arch, made famous by the opening scene of Indiana Jones and the Last Crusade. Or there’s Landscape Arch, which is the longest arch in the world. But the most iconic of all is the Delicate Arch. It’s an unofficial symbol of the state of Utah, used everywhere from license plates to the Utah Jazz homecourt.

Just make sure to save some time to spend your evenings in the town of Moab, where you’ll find lots of shops, diners, breweries, and surprisingly good restaurants.

Day 7 – drive back to SLC from Moab and fly home

The drive back to Salt Lake City from Moab takes about 3 ½ hours, so your last day will most likely just be a travel day. But if you have any time to spare, try to take a few hours to see the cultural sights and landmarks of Utah’s capital city, like Historic Temple Square, the Leonardo Museum, or the Natural History Museum of Utah. After several days of being outdoors, a quick jaunt downtown to eat, go shopping, or see the sights will be a welcome change of pace before you head back to reality.

10 Fun Things to Do In Logan, Utah