Riding around Barcelona on a bus

Riding around Barcelona on a bus

Barcelona is probably one of the most exciting cities to visit in Europe right now. It has a rich history, culture, great food, good nightlife and the beach. You could almost say that it has almost everything that people want to enjoy when they go on vacation. However, many people who visit the city never really explore all the options that it offers. For instance, in the summer, many people just go to the beach all day without ever visiting a museum or some historical buildings, and others don’t trust the local cuisine and eat at fast food chains like McDonald’s or Subway.

The best thing to do when going to Barcelona is to try and sample a little bit of everything. If you want to spend time at the beach, that’s fine, but maybe try walking to the beach in the morning, but stop for some sight-seeing on your way there, or if you don’t have a lot of time to eat, instead of eating fast food, try and go to a tapas bar where you can also get a quick bite to eat but the quality of the food is much better.

You also have to keep in mind that Barcelona is much more than just the city center, meaning the Ramblas and its surroundings. Try and discover other great districts of the city like Gracia or the Eixample, not only will you get more of a feel of what the real Barcelona is like, but you will also discover many great bars, restaurants, and sights that are not as crowded because there aren’t so many tourists. One of the best ways to see Barcelona is by a sightseeing bus.

By the time we got to Barcelona we were worn out from walking around Italy. We decided to get on a tour bus and ride around seeing the sights. After comparing the two tour bus companies we saw in the main plaza, we decided to use Barcelona Bus.  The two companies we looked at were practically the same, but the Barcelona Bus covered more areas.  Barcelona Bus had two different routes.  One route towards Mt. Tibidabo and one towards the Olympics and everything in between.

Barcelona has some of the greatest architecture in the world! Here are a few pictures of what we saw.

Plaza Catalunya – This plaza seemed like a great starting point. 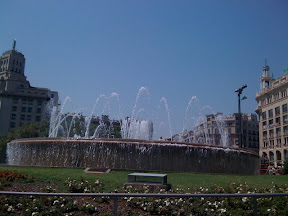 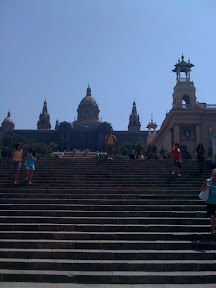 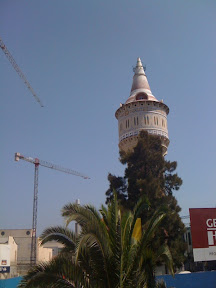 The next two are pictures I took while we were in the Olympic Village area.  The first one is this outdoor artwork called Pergolas on Icaria Avenue.  Created by the architects Carme Pinós and Enric Miralles. I wondered what this was when we passed by.  It was large and lengthy.  It took a awhile for me to find out. Apparently this sculpture/artwork was suppose to be much bigger.  They were not allowed to plant trees for sewage reasons in this area, so they built what were meant to be big metal trees shading the street.  Although that wasn’t acheived (maybe that is what drove them to divorce) I must say it was a very memorable thing to see.  So much so I came home and researched it! 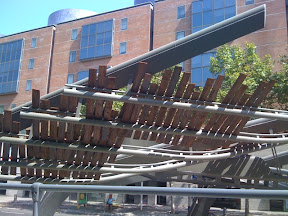 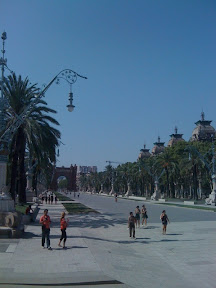 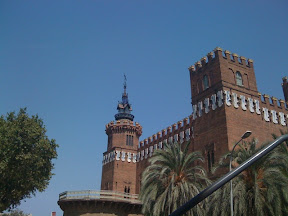 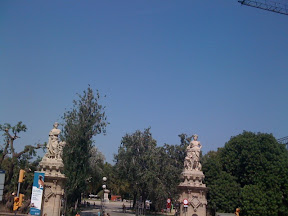 La Seu Cathedral in Barcelona’s Gothic area.  These pictures do not do justice to the size of this cathedral.  We wanted to go in but the line was an hour long and we had seen at least two dozen churches in Europe. 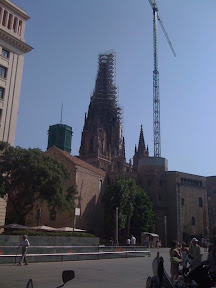 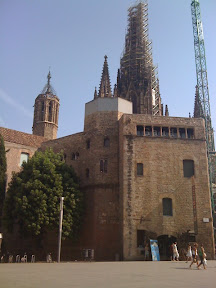 Here are a few recommendations of things to do in Barcelona.

1. Make sure to walk around El Gotico and the Born, which are the oldest parts of the city. Almost all of the buildings are beautiful and you can see historical landmarks from the ruins of the Roman wall and temple, to the old Royal palace of the kingdom of Aragón. There is also a wide variety of trendy bars and restaurants to enjoy for an afternoon drink or for going out at night. The Born especially has many small boutiques and stores where you can find clothing from many of the local designers, as well as some of the best food and wine stores in the city.

2. Visit Gaudi’s creations. This famous Catalan architect has become synonymous with the city of Barcelona, and his buildings are truly a wonder to look at. From his famous church the Sagrada Familia, which is still under construction to the Casa Batllo you will never have seen another building like them and it is easy to appreciate why Gaudi is considered by many to be a genius. A tip for when you visit the Sagrada Familia is to also visit the Sant Pau hospital, which is one of the most beautiful places in the city and is just a five minute walk from the church.

3. Walk around Gracia. This district is a well kept secret among the locals. It starts at the very top of Passeig de Gracia the city’s main shopping street and it is the best area of the city to take a relaxing walk and experience some of the local culture. Gracia is almost void of tourists and it is one of the most beautiful districts in the city, as well as the favorite place for the young locals to go out at night. It has some of the best bars in the city and the drinks are cheaper there than in the center. Gracia maybe does not have many spectacular buildings, but it is overall a very nice and probably the best looked after district in Barcelona.

4. Try the local food. The food in Barcelona is amazing, and it is more than just tapas and paella. There is a wind range of local, traditional food that is really tasting. The most traditional of all being pa amb tomaquet (bread with tomato smeared on the surface). This is most commonly served with a serving of cheese or serrano ham and it is a simple combination that works beautifully. You should also try croquetas, patatas bravas, jamon iberico, morcilla, or calamars a la romana. These are a series of simple tapas that don’t cost much and are really worth trying.

These are just a few recommendations for a city that has so much to offer, but they are well worth trying.