Although the Texas portion of Route 66 is rather short compared to other states, the fact that over 90% of the original road is still drivable makes it a good choice for a trip down the “Mother Road”. Travelers will find museums, old motels, neon signs, ghost towns, and roadside attractions that will provide fun, relaxation, and Americana as only Route 66 can. 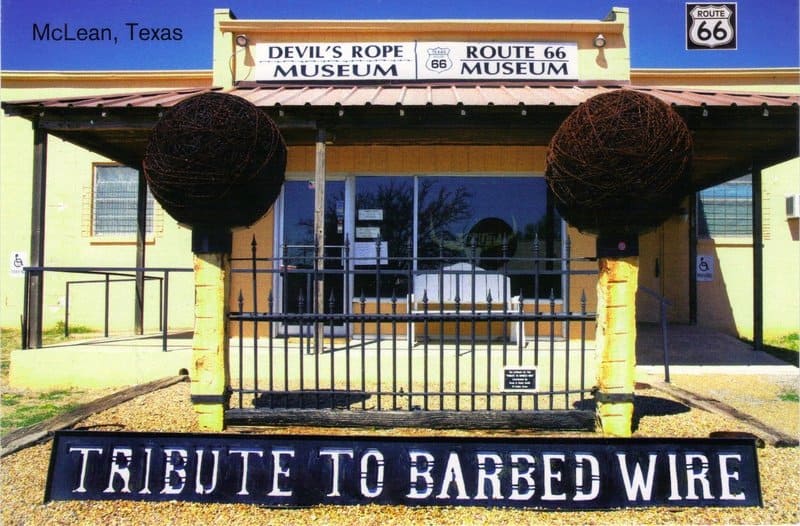 This museum is the largest museum in the world that is dedicated to the history and the importance of barbed wire. Outside the building lies twin balls of barbed wire weighing 400 pounds each; this may be worth a trip by itself!

The Phillips 66 looks like a little pink dollhouse, but it is actually was one of the first service stations that were built by the Phillips Petroleum Company in 1928. Today it is still one of the most photographed buildings on Route 66.

The mid-point between Los Angeles and Chicago landed right in the center of Adrian, Texas and the residents of the town took full advantage of it with hotels, cafes, gift shops, and a big sign that people still stop to get their pictures in front of. Hungry visitors will want to eat at the Mid-Point Café, a restaurant that has been in business since 1928. “Authentic Route 66 Mid-Point” souvenirs can be purchased here as well. 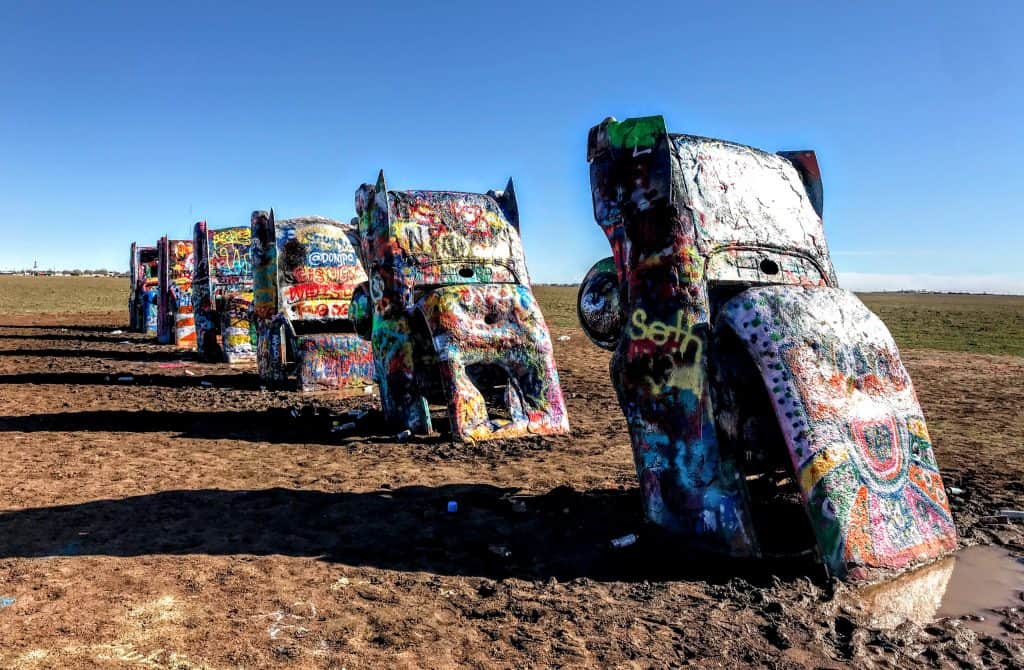 If viewing, taking photos of, and spray painting ten Cadillacs buried nose-first into an Amarillo dirt farm sounds like fun then this stop is for you. Although this attraction isn’t very old, it has the roadside kitsch that Route 66 renowned for. 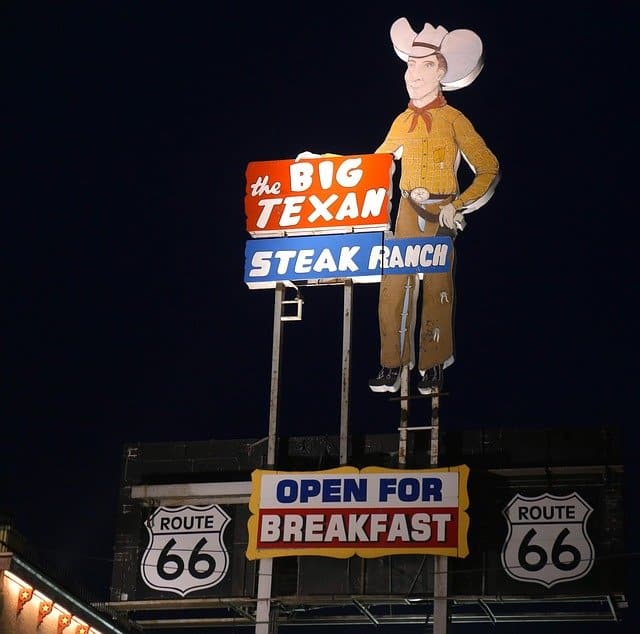 Although the Big Texan now lies on I-40, it is still considered a Route 66 motel and entertainment complex. Guests of this cowboy-themed fun house can listen to The Big Texan Singers, meet a rattlesnake, swim in a Texas-shaped pool, take a free ride in a Longhorn Limousine, and eat fried rattlesnake, mountain oysters, and a free 72 oz steak (if you can eat it in one hour!).

Tourists who didn’t get enough of Cadillac Ranch can find the same idea in Conway except with VW Beetles shoved down into the dirt instead. Don’t forget a can of spray paint to add your special touch.

People from all across the world have turned their heads and snapped a picture of this odd water tower that leans to one side. The ingenious creators of the water tower purposely made one of the legs shorter than the others so that tourists would be more likely to visit the town.

Groom Cross: Steve Thomas of Pampa, Texas created this huge 190 feet cross in 1995. It is considered the largest cross in the Northern Hemisphere. Visitors can also tour the property which includes a memorial for victims of abortion, a Calvary replica, a replica of Christ’s tomb, and life-sized sculptures of the events that lead up to His crucifixion. To learn more, go to their website.

This history museum is housed in the 1920s Reynolds Hotel and has different exhibits focusing on farming and ranching artifacts, pioneer weapons, Native American culture, and rooms set to look like an old-fashioned dental office, general store, schoolroom, and a pioneer kitchen.

This art deco building has been a Route 66 icon since its beginning as a gas station and restaurant and was even featured in the animated movie Cars. After the portion of the Route 66 was bypassed in 1956, the U-Drop Inn fell into disrepair. In 2000 the city began restoring the dilapidated building. Today, the Tower Station & U-Drop Inn is beautifully restored and houses a history museum, visitors’ center, gift shop, and the chamber of commerce.

Tourists who might not be able to make it to Ireland can find a small bit of green in Shamrock. A chunk of Blarney Castle was transported here in 1959 and there are two monuments to help passerby with luck.

Although people have settled in Alanreed for years, it officially became a town in 1900. In 1901 buildings began to sprout up but the population began to climb when it felt the effects of both the 1927 Panhandle Oil Boom and the creation of Route 66. By 1933, however, the population began to drop and businesses were abandoned. Visitors to Alanreed can explore the oldest cemetery and the oldest church on the Texas portion of Route 66 as well as tour a restored gas station that is maintained by the Texas Historic Route 66 Association.

The above attractions are not all the things that you will be able to see on “America’s Main Street” as there are many more kitschy signs, ghost towns, and monuments just waiting to be found on the “Mother Road” in Texas.

18 Things to do in Midland, Texas