Christmas Eve is a magical time for we of the Hebrew tribe, a holy night dictated by ancient tradition. In the old country, Jewish families would celebrate the festive occasion by covering our more beautiful family members with drab linen in anticipation of late-night visits from merry-making Cossacks.  Nowadays we celebrate Christmas Eve the Jewish-American way: By going out for Chinese Food. 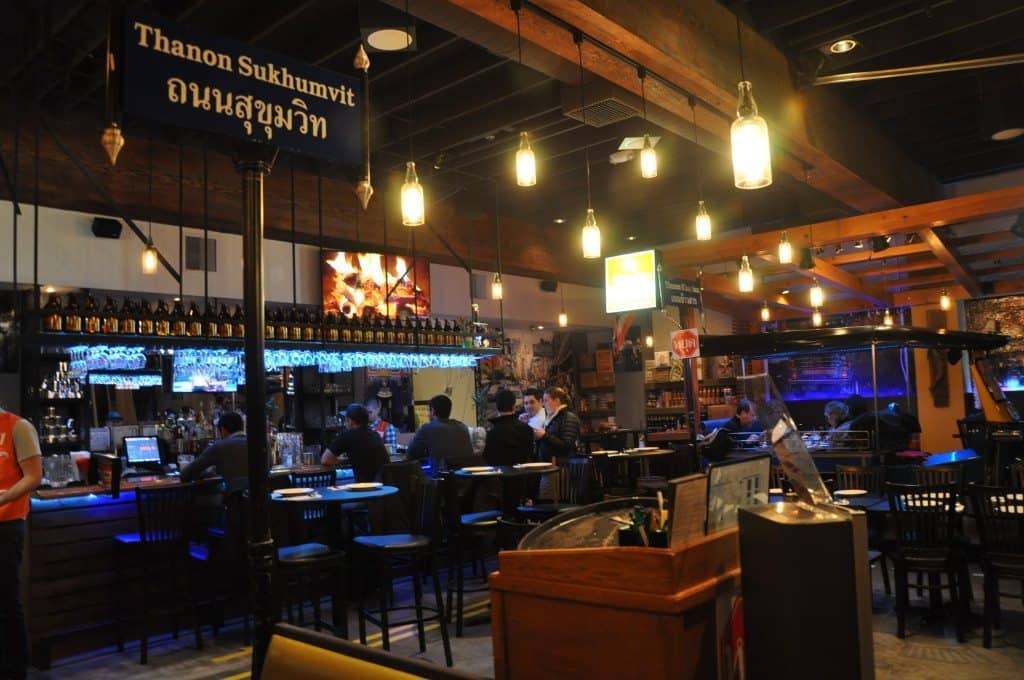 But not for nothing is Portland known as a weird town, and this year the members of my local family — my brother, my girlfriend & I  — subverted tradition by heading not to one of the many Hunan Gardens or Mr. Wong’s Magic Woks that have, over the last century, offered our people comfort and succor on this most alienating of nights, but to a Thai restaurant instead.

As this is my post for Mommy Travels, I need to pause the narrative briefly, lest readers unfamiliar with my work mistake me for a random curmudgeon. Having lived in Asia most of my adult life, for the last nine years I’ve been writing for Lonely Planet, researching guidebooks, and writing articles about dining (fine and otherwise) from places like Singapore, Taipei, Malaysia, China, and other places known for their culinary excellence. Where Asian cuisine is concerned I’m a gourmand’s gourmand, a culinary snob, and a diner you’ll not find feeding happily on lukewarm General Tsao’s Chicken at an all-you-can-eat Chinese buffet.

And if that isn’t enough to convince you of my culinary snobbery, the following is a complete list of Thai restaurants in America that haven’t disappointed me:

Khao San’s neon sign drew my little family of three inside, much like the North Star drew three wise men to a certain manger in Bethlehem two thousand and fourteen years ago. As the restaurant was fairly bereft of customers we sidled up to the bar and joined a small handful of other Xmas-eve refugees who’d gathered for holiday drinks beneath a flat-screen TV that was playing that perennial holiday classic Yule Log. Except for singles drinking at the bar, there was only one other family dining in the normally crowded restaurant, parents with two children. I was slightly miffed, because the family occupied the exact table I wanted.

(Lest you think me childish, the table I wanted is totally awesome. It’s a table inside and actual Thai Tuk-tuk that Khao San’s owner brought back from Bangkok! Pretty cool, huh? A favorite with the kids, the Tuk-tuk table is almost always taken and I’ve never gotten a chance to eat in it. But I didn’t make a scene, because Christmas is all about the children.) 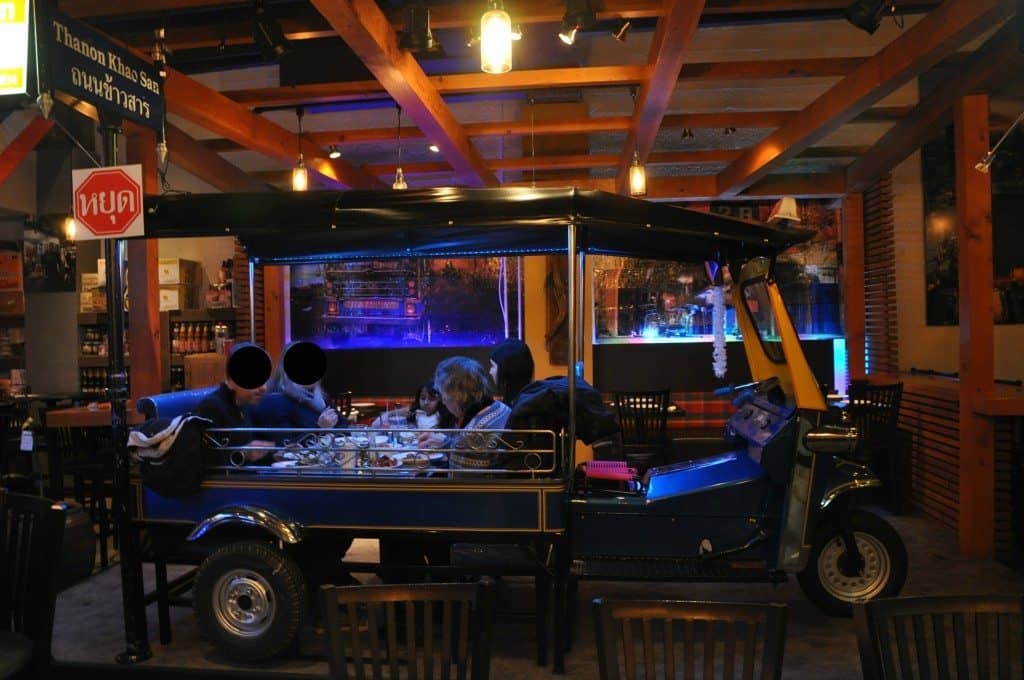 Our family of three grabbed another table seat and began contemplating suitably festive dishes for the evening. Since discovering the restaurant a few months back, Khaos San has been our go-to, thanks in part to its convenient location and reasonable prices. On our first few visits, we fell into a routine, ordering pretty much the same dishes ever time – Tom Yum Seafood soup, sticky rice, and Pork Belly with String Beans. On our last visit my girlfriend and I agreed to branch out and to refrain from ordering old favorites (except for the sticky rice, a Thai staple) until we’d tried at least half of the other dishes on the menu.

Being Christmas Eve, we decided on the most festive sounding dish on the menu, the as-of-yet-untried Hooker Shrimp. As a second dish we ordered Jungle Curry, described on the menu as spicy apple eggplant, green beans, bell pepper, holy basil topped with ground chicken. For our third dish we opted for the Chinese broccoli (to maintain the Christmas-China connection tradition) with chunks of crispy, fatty chunks of marbled pork belly (because it was also technically still Hanukkah). 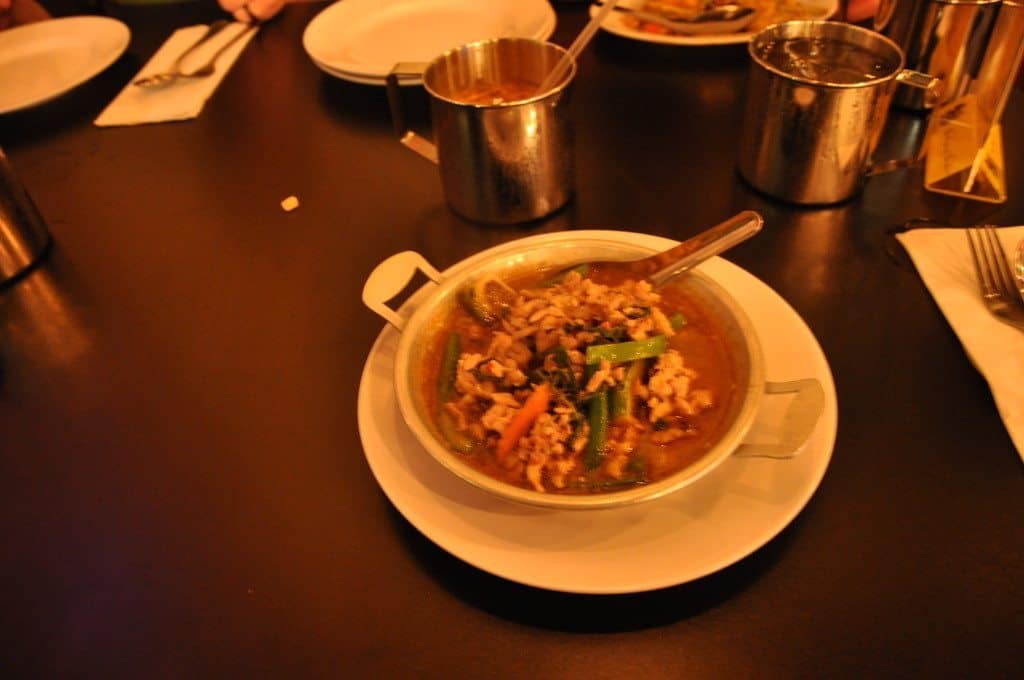 Jungle Curry with the chicken on top

All dishes were excellent. The Hooker Shrimp were large and plentiful, more prawn than shrimp, served, as Thai tradition dictates, with their heads still on in a spicy sauce of curry and evaporated milk. The Curry was excellent, though whether the holy basil provided any sort of spiritual benefit I cannot say. And the crispy pork belly, bacon-squared, is a dish absolutely worth the defiance of rabbinical law.

I tend to be a fanatically loyal patron once I’ve found a good restaurant, and this is especially so when I locate a place serving cuisine that’s among my favorites (Thai) and the hardest to find meeting up to my exacting Asia-phile standards (Thai Again). Décor, staff and management friendliness, price and convenience aside, there are two main reasons why I’ve fallen so hard for Khao San Street Food:

What’s on the menu:

Beautifully done dishes reminiscent of those I’ve eaten and loved on my travels through Thailand and Laos, dishes like the deceptively simple yet oh-so-complex dish made from minced pork, shallots, green onions and mint leaves, served with a spicy lime dressing. The dish is called larb, and while it sounds like something you’d find in the kitchen of a Klingon battle cruiser, its 100% Thai and pure heaven. Dishes like Som Tom Thai, the spicy Papaya salad that’s a staple at any good Thai street stall, and it’s more challenging (and not for neophytes) Laotian culinary cousin, Som Tum Pu Pla La. The menu warns that the latter dish is strong and somewhat challenging, prepared with fermented fish and bits of pickled crab still in the shell.

What’s not on the menu:

Pad Thai. Pad Thai is the dish street-chefs in Thailand serve to backpackers who don’t like actual Thai food. Thai people who’ve accidentally ingested Pad Thai report finding the substance flavorless and unfamiliar.  This dish is not on the menu, though another Thai Restaurant staple – fresh spring rolls – is. Khao San’s version is served bite-sized and with peanut sauce, and is a favorite among kids and people with a low spice tolerance.

Sated after a meal for three that, with non-alcoholic drinks (Khao San’s Thai iced tea, served in a traditional metal cup, is refillable) came to about forty bucks with a generous holiday tip, my party of three exited the restaurant into the holiday chill of Portland’s Pearl District, eager to follow the North Star to whatever destination it might lead.

(Author’s note: Khao San does not accept frankincense, myrrh, or other valuable unguents in lieu of payment. Most major credit cards accepted.)

Joshua Samuel Brown (@josambro) has authored and co-authored 13 guidebooks for Lonely Planet and is a regular contributor to their annual World’s Best Food book series. His latest creative endeavor,  a book of illustrated travel stories called How Not To Avoid Jet Lag & other tales of travel madness

can be purchased from Amazon.