The Sir Walter Scott monument in Edinburgh, Scotland is on Princes street. Princes Street is a main street with lots to see and do.

Sir Walter Scott was a Scottish historical novelist, playwright and poet. You are probably familiar with one of his famous quotes. Oh what a tangled web we weave, when first we practice to deceive!

The tower is 200 feet 6 inches (61.11 m) high, and has a series of viewing platforms reached by a series of narrow spiral staircases giving panoramic views of central Edinburgh and its surroundings. The highest platform is reached by a total of 288 steps. 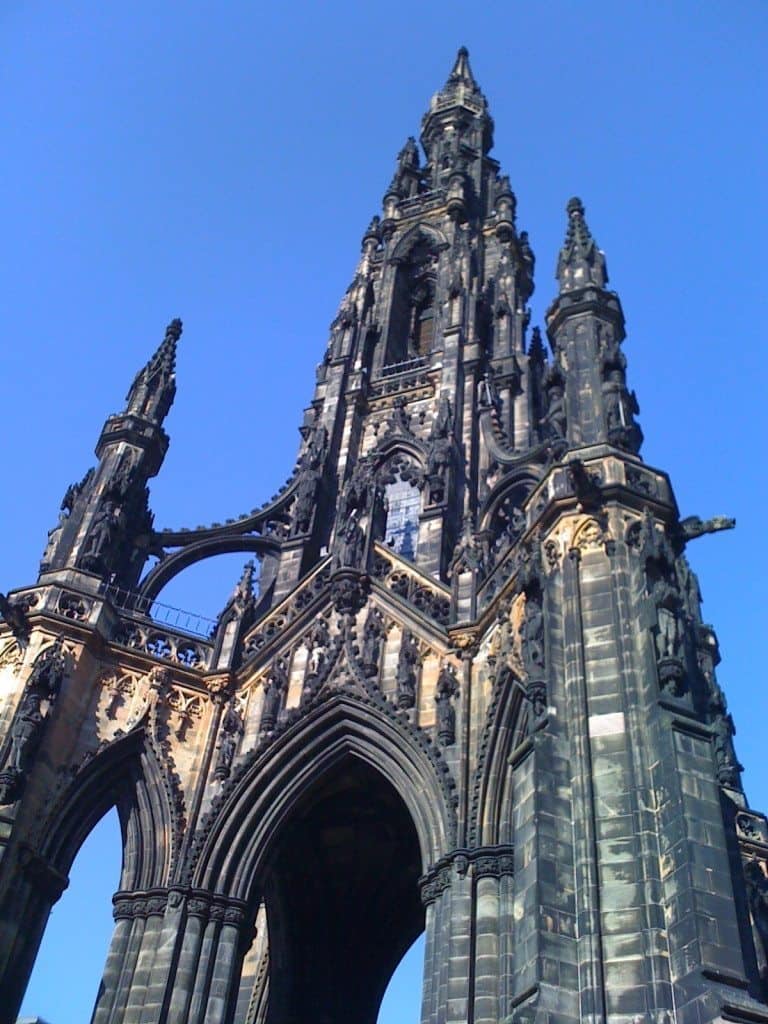 We ate at a tapas place just off of it near this monument that was awesome. If only I could remember the name of it. They had great Sangria, so sadly I do not really remember a whole lot about it. Don’t judge me! This was a trip without the kids!
While in this area, we also did a fun ghost tour in Edinburgh. If you are looking for more things to do, check out 21 things to do in Edinburgh.
Random Travel Tip: When we were driving from Northern Scotland down to Edinburgh we found a great place to stay. Not far from Balmoral Castle, the Queen’s summer home in Scotland is a lovely hotel that we just happened upon driving through the Scotland countryside, the Hilton Craigendarroch.

I had a hard time finding a hotel within our budget and was very pleased when I was able to book a great low rate at Valentine City Centre Guest House. We stayed in 2 different rooms because we decided to stay an extra night. Our first room was large, but we had to share a shower and a toilet room with two other rooms. I was worried it would be a problem, but it wasn’t. We never had to wait to use either & both were always clean. The second room was slightly smaller and in a less renovated part of the building. It has the original staircase in it. Very cool! Our room had a small bathroom in it. Again, everything was clean. They had parking which is a huge plus. It is difficult to find parking at times. Breakfast was excellent and included! The location was good, about a ten-minute walk to the castle. The owner is incredibly knowledgeable about the city.

Mariachi – We found Mexican food in Scotland near the castle. It was good and the restaurant itself was beautiful. I expected the food to be bad, but it wasn’t. We had the nachos and Sangria. The nachos were good and a large portion. The Sangria was excellent! We would go back.