The Best Free Things to Do in Mexico City Center

The Best Free Things to Do in Mexico City Center

If you are looking for things to do in Mexico City, you won’t have to look too hard. The most populous city on the North American continent, Mexico City, truly has something for everyone.

With a fascinating and ancient history, a vibrant and festive culture, and one of the world’s most celebrated food scenes, the opportunities are endless. In fact, the sheer size of this city, in area, population, and variety can be daunting and at times completely overwhelming.

Rather than hit you with the top one thousand and one things to do in this sprawling city of over 20 million inhabitants, let’s narrow the focus and start with something a little easier to get started.

Here are the top 8 free things to do in Mexico City’s city center. The great news is you won’t need to pay for a cab, learn how to navigate Mexico’s hectic public transport network, or learn how to drive in Mexico. These free Mexico City attractions are all within walking distance. So grab your comfiest shoes and let’s get stepping.

Begin in the Zocalo 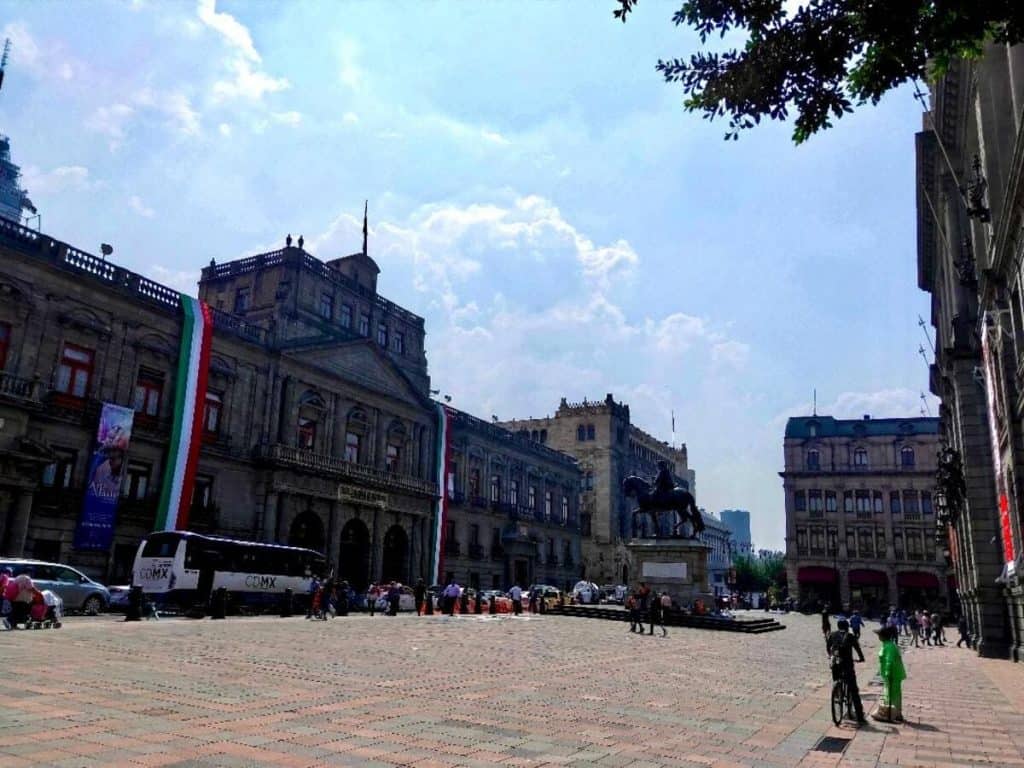 Begin in the heart of Mexico City. Known as the Plaza de la Constitución, the zocalo or central square is the epicenter of town from which Mexico City radiates out in all directions. This central square is a great place to get a photo of the massive Mexican flag and see street performers. The zocalo serves as a jumping-off point from which to explore some of downtown Mexico’s most popular attractions.

At 6 am each morning, and every evening at 6 pm, you can watch the flag ceremony. Military police parade into the square to raise and later lower Mexico’s biggest national flag.  A fun fact about the Mexican flag. According to legend, Mexico City is built where it is today because the gods advised the Aztecs to build their city in the location where they saw an eagle eating a snake on a prickly pear tree. This symbol has come to represent the Mexican people and is the emblem on the Mexican flag.

The Zocalo is also surrounded by some of Mexico City’s other great free attractions like the Palacio Nacional, the Temple Mayor, and the Metropolitan Cathedral. 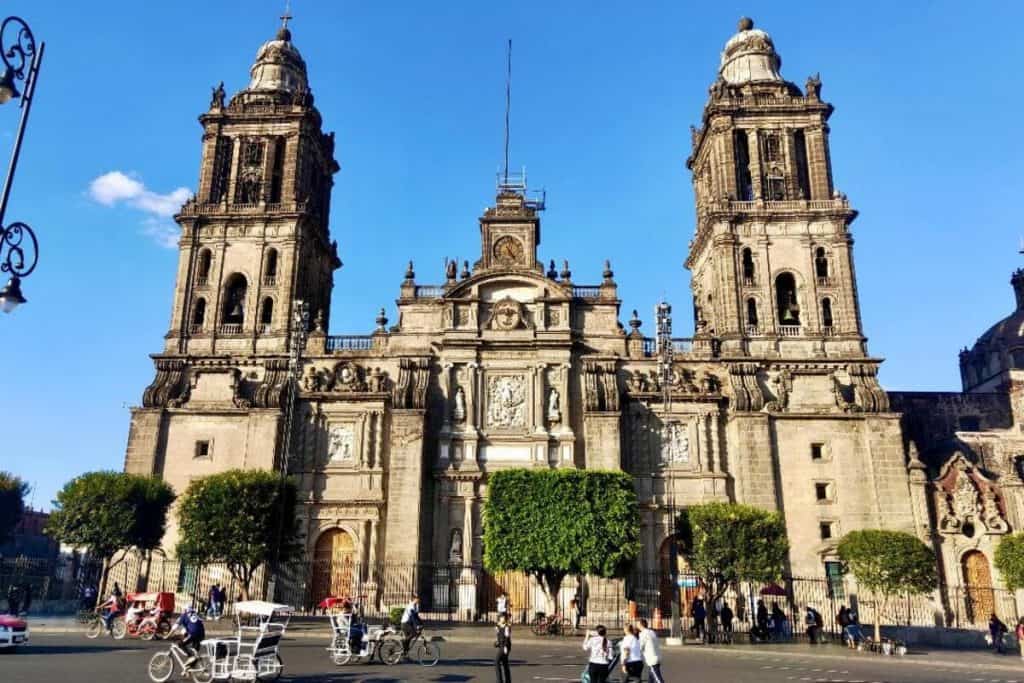 From the Zocalo, facing north you will immediately spot the imposing Metropolitan Cathedral. Mexico’s largest cathedral is one of the most important buildings in the centro and indeed the city. Construction began in 1573 and it took a whopping 250 years to complete, explaining the broad range of architectural styles and influences.

Today Catholics and tourists from all over the world flock to this impressive temple.

Within, five centuries of art and religious icons have been amassed in one of the largest and most impressive collections in the world.

Entry to the cathedral is free, and it is open daily between 8 am and 8 pm.

Check Out the Tenochtitlán Ruins

Some of Mexico’s most famous and impressive ruins are found just 50 kilometers from the city center at Teotihuacan, however, you don’t actually need to leave downtown Mexico City to discover the remnants of the Aztec civilization.

Modern-day Mexico City was built over the ruins of Aztec City, Tenochtitlan. Today you can still see the ancient ruins nearby the main zocalo.

Although the ancient city was razed, its structures dismantled and the materials used to build the cathedrals of the Spanish conquerors, excavations have revealed the fascinating remains. Visitors can explore what is left of The Templo Mayor, the Great Temple. There is also a large museum that holds a series of recovered Tenochitlán artifacts.

You can see the remnants of the temple from the street for free. On Sundays entry to the Templo Mayor Museum is also free. Monday to Saturday entry costs 80 pesos or about $4.

To the east of the central square is the Palacio Nacional. This grand building has been important through several civilizations and eras. It was originally the place of an important Aztec building, next it served as the palace of Cortés, following Mexico’s independence it became the seat of the federal government, and today it also serves as the residence of Mexico’s president.

Tourists come to admire the impressive facades and to wander the grand corridors and stairways. Throughout the palace, the artwork, sculptures, and murals that adorn the palace, including works by one of Mexico’s most influential artists Diego Rivera, tell of the culture and history of Mexico.

Open Tuesday to Sunday from 9 am (sometimes 10 am) until 5 pm. Entry is free but you will need an official I.D. so bring your passport. The Palace is often (and without announcement) closed to the public. Local guides may approach you as you line up to enter and offer their services to provide additional insight into this iconic national treasure.

Beyond sending a postcard, the Correos Mayor or main post office is one of the most beautiful buildings in Mexico City.

It is worth popping in to see just how beautiful an old-world post office can be. The stunning architecture, ornate decorations, and complex metalwork are all very impressive, especially for a humble post office.

This grand, century-old cake shop is one of the most impressive bakeries in the city. You smell it before you see it, as the smell of fresh baking wafts down the street. Inside, piles of bread, pastries, and sweets of every possible description are piled on laden tables which fill the cavernous room. The second floor is home to the ‘cake room’ where you can wander among delicious pastel creations, some taller than you.

Entry to this bakery is free and it is worth a look even if you are not buying anything, but with so many delicious and novel options it would be a shame not to try something new. The bakery is open from 6:30 am until 8 pm every day. 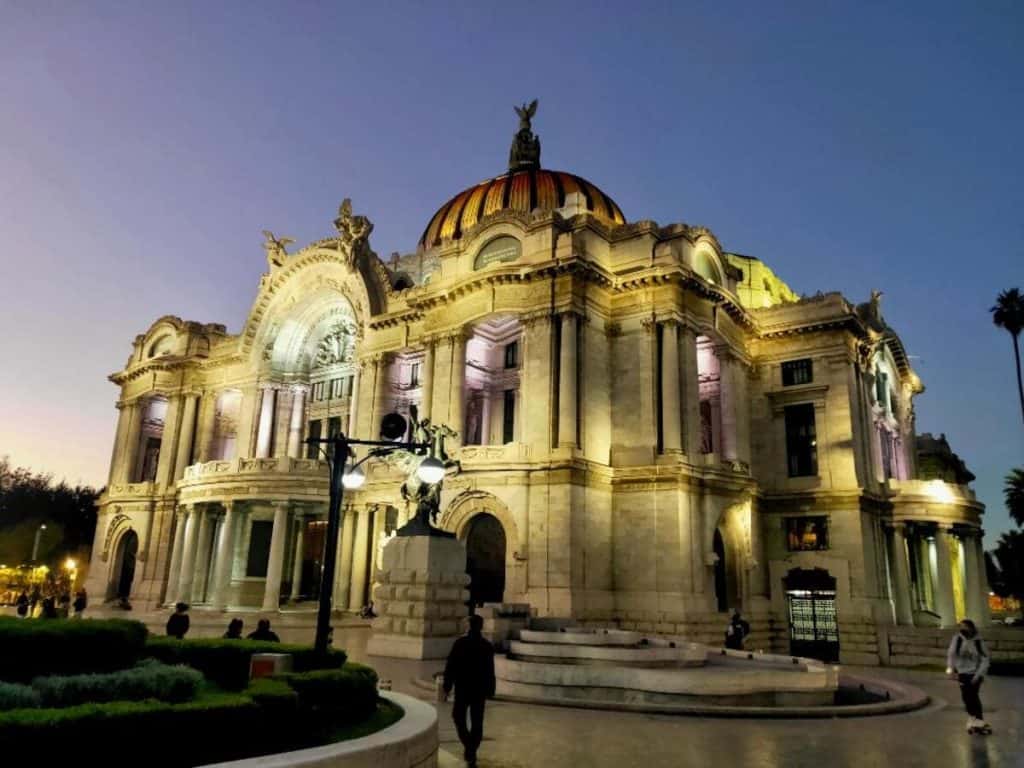 The interior is equally impressive. Throughout the palace, murals by some of Mexico’s most prominent and influential artists can be found.

Classic music lovers can enjoy a symphony performance every Sunday at noon at the Palacio de Bellas Artes, in addition to the ballet recitals and operas held here frequently. The Bellas Artes is also home to the national museum of architecture and regularly hosts art exhibits. There is an onsite cafe and book store.

Entry to the Palacio is free on Sundays or $75 pesos ($3.50 USD) Monday to Saturday. Events and exhibits may charge an extra fee. The Palacio de Bellas Artes is open between 11 am and 5 pm Tuesdays through Sundays. 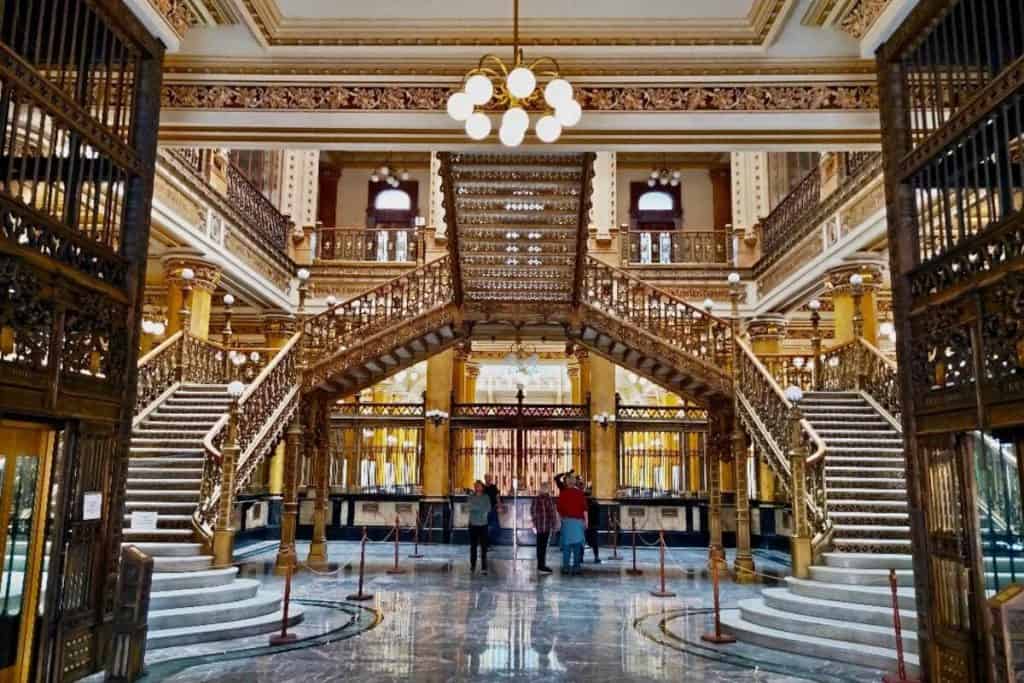 The National Museum of Art is one of the most highly rated things to do in Mexico City and should be included on any itinerary, but especially for art lovers. This impressive collection is housed in an equally impressive building that formerly served as the Palace of Communications.

With 3000 pieces created between 1550 and 1950, you could easily spend a whole day here taking in the whole collection but at the least set aside a couple of hours.

Tip: Tip-based English walking tours leave from Hostel Mexiqui at 10 am and 2 pm every day. These tours are one of the best ways to see, some of Mexico City’s most famous attractions, with some context.

Tip: Museo Soumaya is another impressive free Museum, although it is a little further outside the city center.

Tip: Wondering through Mexico City it can be easy to become lost in the concrete jungle and forget that there are incredible green spaces in Mexico City. The beautiful parks of Mexico City are immaculately landscaped, adorned with statues, sculptures, and fountains. They are also a hive of activity. They serve as training grounds, exercise areas, and places for families to spend time. You will regularly see buskers, food sellers, hawkers, performances, demonstrations, and more taking place in the city’s parks. They are fantastic for people watching and soaking in the culture of the city. What’s more, they are completely free!

A Weekend in Mexico City