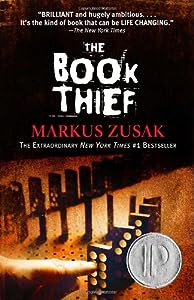 is one of my favorite books and has been for several years. It is the book I most often recommend. It’s well written and interesting. Depending on your kids reading level I would recommend this book for any kids 12 and up.

The Book Thief is a work of historical fiction and takes places during WWII in Germany. Death is the narrator and tells the story of a little girl growing up in nazi Germany. Death names her the Book Thief. You know that death is always near, because he is the one observing what is going on. Throughout the book you are literally waiting for the little girl to die as Death observes her being sent away from her parents, having her friends killed and recruited, often going without enough food, and sneaking around.

Although I’ve read many books regarding World War II, this is the first one that I’ve read that is from a German’s child’s perspective. Granted it is historical fiction, so take that perspective for what it is worth. The author has done their homework on what it was like growing up in nazi Germany as a child and weaved an assortment of that into the story.

I have a degree in History, but all the classes I took and the books I have read dealt with other aspects for the war. So, even for me it was enlightening and I think that is why I enjoyed the book so much.

Update: Since reviewing this book they have made a movie. I have not seen the movie, so I cannot comment on whether or not it follows the book or not.
2017-02-12T09:20:54-06:00By Meagan|Categories: Book, Review|Tags: Book Thief, books, Germany, Historical fiction, Nazi Germany, review|0 Comments