The Disney Fantasy cruise ship is a  wonderful experience. The food is phenomenal and the decor is stunning. The shows are Broadway quality and the nightclubs are super fun.

If you think the outside of the Disney Fantasy ship is grand, which it is, just wait until you see the inside. Immediately upon entering you are met with the full richness of the ship. It is crazy nice. Lavish light fixtures, blown glass, tile artwork, and more.

This is the main lobby and it’s the first thing you see when you get on board, a massive chandelier and a cascading staircase. This staircase is a good place for a photo. 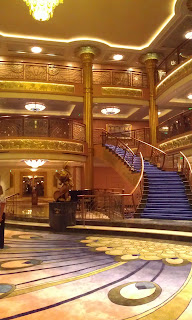 The blue, pink, and green chandelier is in the middle of the lobby.

Even the carpet is beautiful. The carpet changes all throughout the ship, but it is always themed. 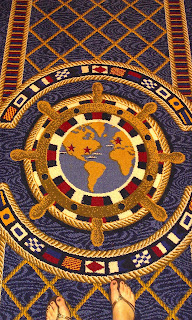 The gold and red globes are blown glass. You can find it inside the Palo restaurant on the ceiling. 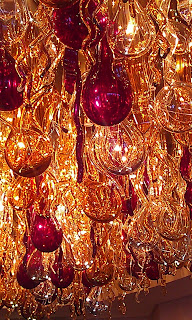 Be sure to check out the bathrooms they are all elaborately done up. 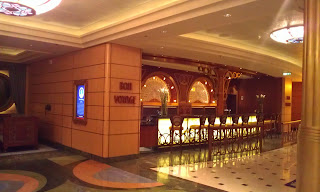 Dessert on the Disney Fantasy

Dessert time on the Disney Fantasy is spectacular no matter which restaurant you dine at. I had no less than 4 desserts at every meal. Obviously, there will be no tips in this post on how not to gain weight on a cruise, but there are dessert photos. Here are some of the various desserts I tried on the ship.

The first two pictures are from dinner at the Royal Court Restaurant.

These two are from the Enchanted Garden restaurant. 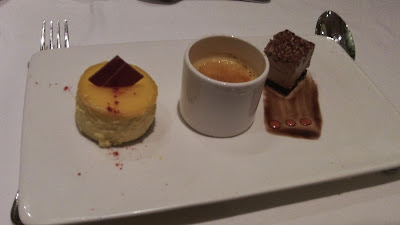 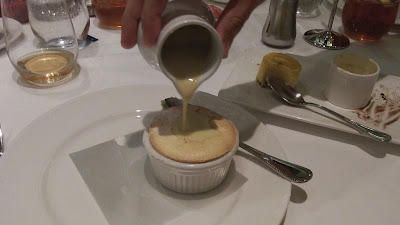 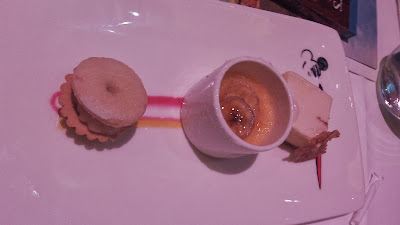 Aboard the Disney Fantasy is a  special place just for adults called the Europa District. Here you will find 5 unique nightclubs and lounges. Here are three of the adult only clubs on board.

Oh La La – Ooh La La is an adults only lounge and champagne bar. It’s a divine space to lounge in. 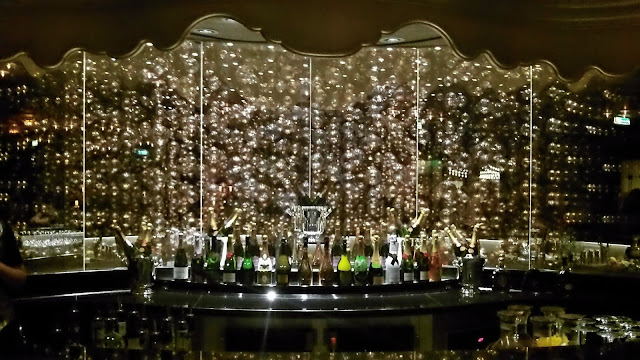 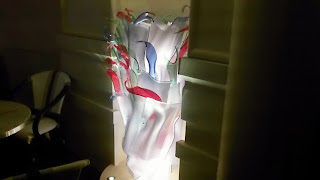 Skyline – Skyline is a cosmopolitan sky-bar on the Disney Fantasy and Disney Dream serving up handcrafted cocktails and changing views of global cityscapes. 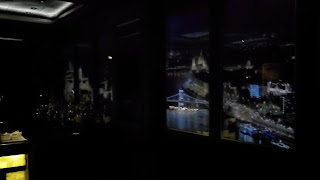 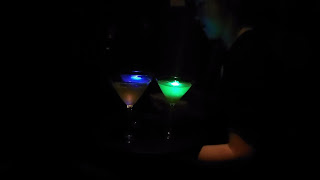 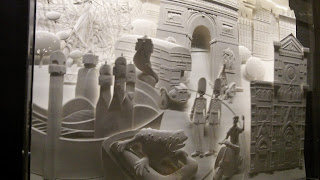 The Tube – The Tube transports you into a nightclub in the midst of Piccadilly Circus in swinging 1970s-era London. 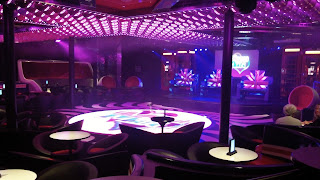 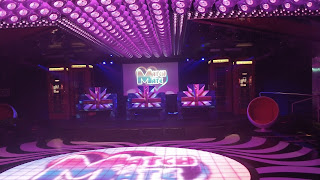 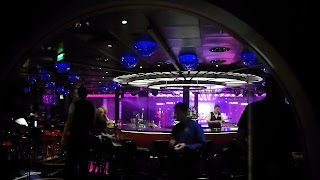 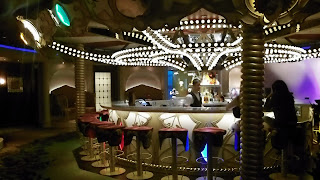 Have you ever seen a live show that blew you away?

All three shows aboard the Disney Fantasy were totally impressive. I think they know how good they are, so they show you a marvelous show the first night. Then the next night they outdo themselves. By the third show people are leaping to their feet. The audience can barely contain themselves. At times you forget you are on a ship, because it feels like you are in NYC at a Broadway show.. The talent is overflowing and the sets are stunningly elaborate.

The three Disney cruise ship shows I got to enjoy were Wishes, Aladdin, and Believe.

I highly recommend all three shows. I would watch all three of them again. They’re perfect for all ages. There’s even a splash of (clean) adult humor sprinkled throughout the shows. There are also some shows that go on outside on the deck of the ship.

Pirate Show
This video is of one of the shows you can see while on your Disney Fantasy cruise, a pirate show. One of the nights you are on board they’ll have a pirate show where Captain Jack Sparrow fights off the enemies. Captain Jack will at one point set off a fireworks show.

It’s an elaborate show that goes on for quite a while. You can see it from multiple places on the ship. I think the best place to see it is on the right hand side of the stage up on the balcony. You can see different viewpoints in the video to give you an idea of where you might like to stand/sit.

Disney Fantasy’s Senses Salon and Spa aboard the Disney Fantasy cruise ship is exceptional. They had a little bit of everything and the prices allowed for most to be able to afford something there, even if just a day pass.

You can watch this short video to see how the sensory showers work. My friend did this and Loved them! 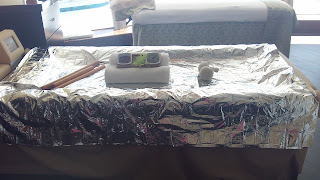