Here are 18 fun things to do in Odessa, Texas one of the fastest growing cities in the U.S.

Soon my family and I will travel once again to Odessa Texas. We are from there and our parents and siblings still live there. We would probably live there too, but there are no military installations there! Growing up there I always heard people say that there is nothing to do there, but that isn’t true. Here are a some things you can do in Odessa and Midland if you live there or find yourself visiting there. 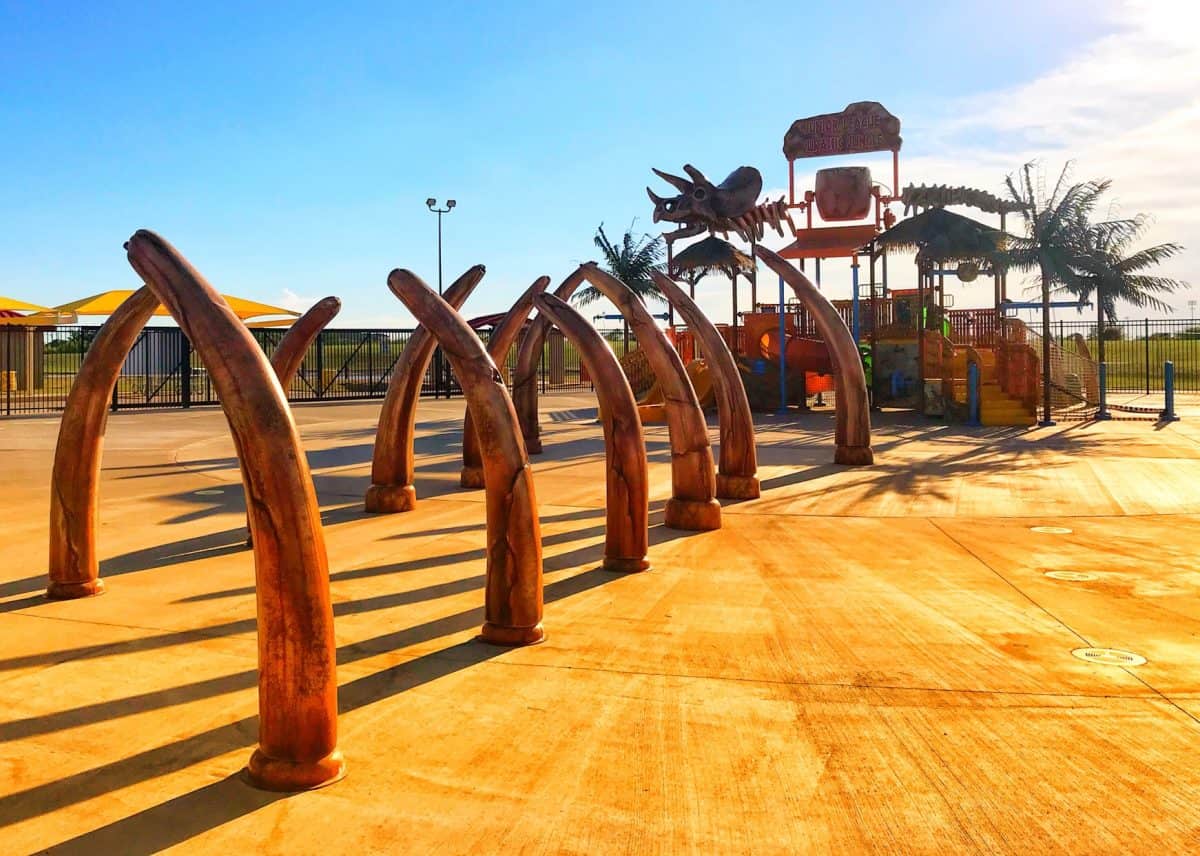 The Jurassic Jungle is a new splash pad/splash park on the UTPB campus near the baseball fields and regular playground. It’s free thanks to the Odessa Junior League. Be sure to check the hours they are running, because both times we went it was closed.

Odessa has a great community pool at Sherwood Park. It’s affordable too, they have a family night that is super cheap. My kids always like coming here to cool off during hotter months. There’s a playground next door that is fun for kids as well. It’s been re-done recently, but the octopus is still there!

Midland has a fantastic community pool that kids will love. I think this is the best community pool in the area. It has bigger slides than the other community pools, a dedicated area for younger children, a rock climbing wall, and more.

Odessa finally has an indoor trampoline park and it’s a good one! It’s a little expensive, but your kids are sure to love it. They have an Olympic trampoline. 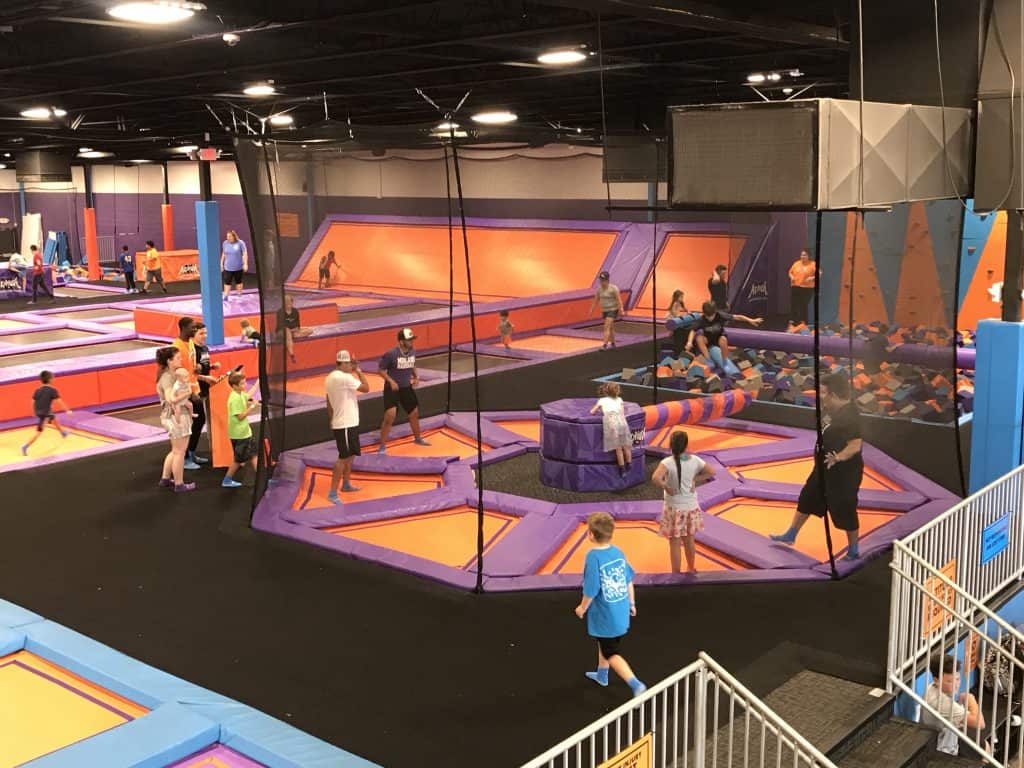 The Globe of the Great Southwest

The globe theater is a replica of Shakespeare’s globe theatre. They put on many plays here and they also host a Shakespeare festival every year.

They put on a variety of plays and musicals throughout the year. Many years ago I saw Fiddler on the Roof here and it was very good.

The commemorative Air Force Museum includes planes from several foreign countries and other military conflicts since World War II. They host an air show every year.

They are the Permian Basin’s minor league baseball team. The games are very fun and kid friendly. They have a very nice playground for the kids. They do a great fireworks show for the 4th of July.

They are the area’s minor league hockey team and based in Odessa. The games are kid friendly and fun.

With little to no rain you can golf almost year round in Odessa. 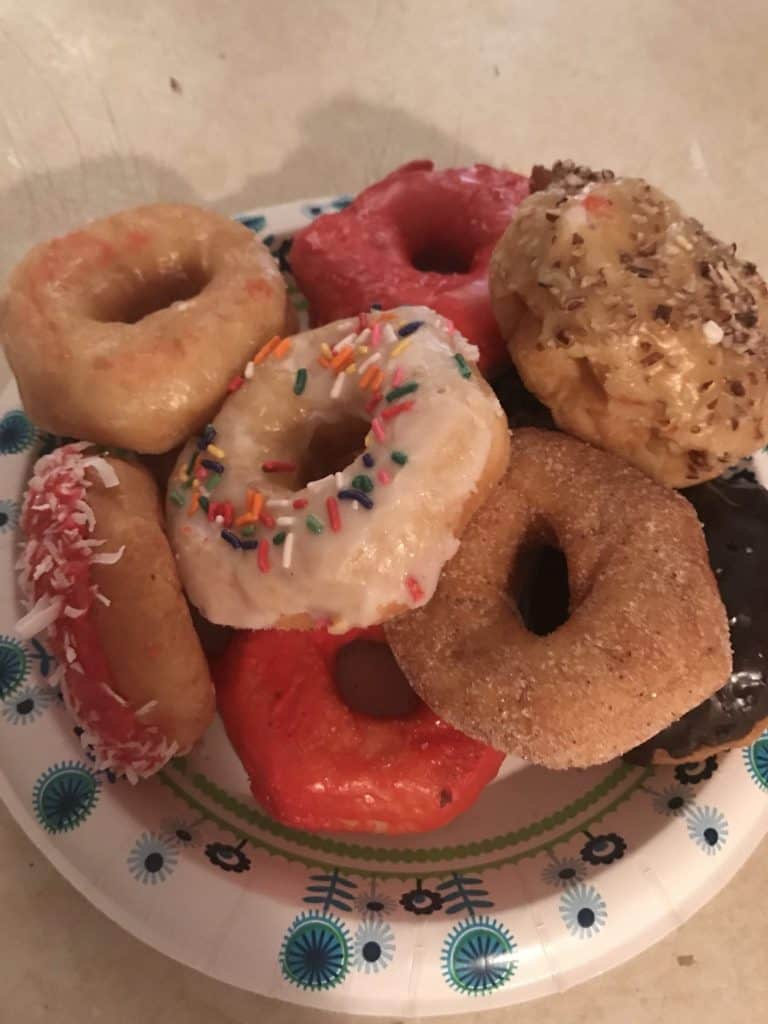 Odessa has its very own Stonehenge replica on the UTPB campus. This version of Stonehenge is made of limestone slabs up to 19 feet tall and 20 tons apiece. The Permian Basin Stonehenge is slightly shorter than the original, but it’s exact in horizontal size and astronomically accurate. For some reason this was the best photo I have of it. 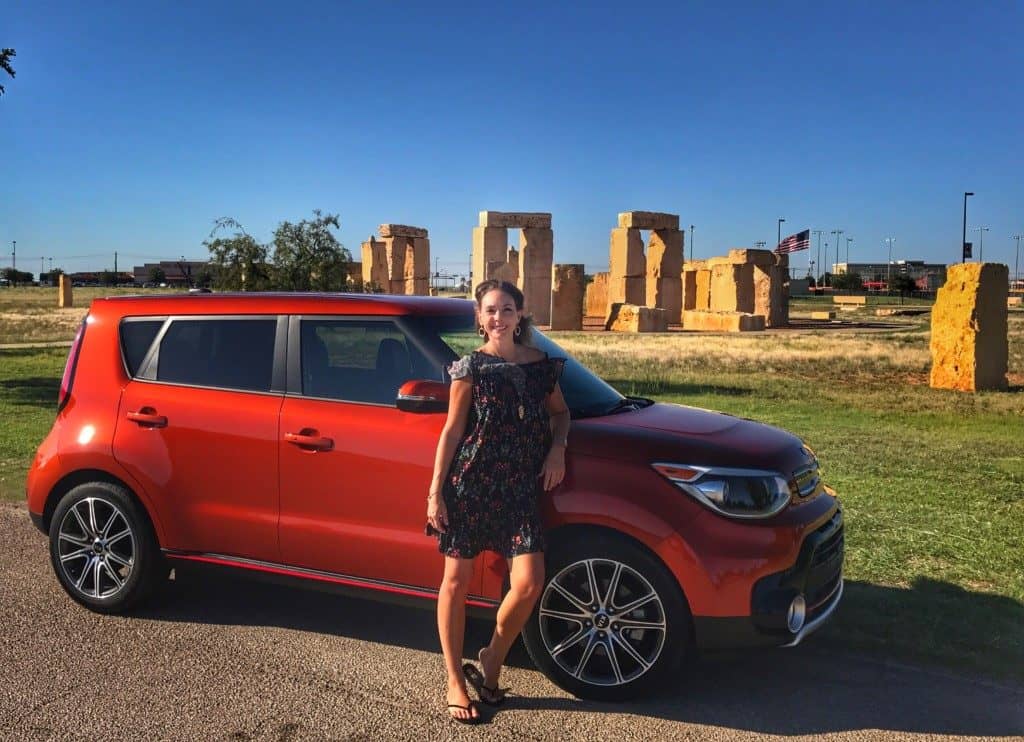 The 62,000 year old Odessa Meteor Crater is a meteorite crater in the southwestern part of Ector County, southwest of the city of Odessa of West Texas, United States. It is accessible approximately 3 miles south of Interstate 20 at Exit 108. It is  the second largest meteor crater in the U.S., a hole 550 feet wide and 100 feet deep formed when a thousand-ton mass of space-iron slammed into the earth. I have not been out here in over two decades, but I’ve heard from some that it isn’t really a crater anymore.

Museum of the Southwest

The Museum of the Southwest over in Midland has a fun kid’s area. The kids area is known as the Durham Children’s Museum. Here kids will find a variety of interactive spaces that create an exciting learning experience for children of all ages. Ponder marine life by visiting our living coral reef. They can experience hands-on learning and life while playing in the child-sized grocery store, kitchen and vet clinic. The museum also offers community events.

The Sibley Nature Center encompasses 49 acres in Hogan Park in Midland and highlights the southern Llano Estacado, Edwards Plateau and Transpecos Regions. Inside they have taxidermy exhibits of animals found in our region, which can be highly entertaining for kids. For kids, they offer guided tours, toddler times with gardening and story time, and they have a nature club for grade schoolers. The Sibley Nature Center is open to the public Monday through Friday 9 a.m. to 6 p.m. and Saturday, 9 a.m. to 4 p.m. and the Sibley Nature Trails are open daily sunrise to sunset.

This is an 87 acre park with a little marsh, walking trail, and butterfly garden in Midland. It’s an oasis in the middle of the desert. Wildlife tends to make an appearance later in the evening or early in the morning. They have an easy, partially shaded 1.2-mile loop trail that encircles the wetland marsh. The trail surface is asphalt, hard-packed dirt, and wooden boardwalk. The Texas sunsets here are beautiful. Admission is free. The nature preserve is open from 8:00 A.M. -6:00 P.M. Tuesday-Saturday. The I-20 Wildlife Presrve is located at 2201 S. Midland Drive,

There is a playground inside the Music City Mall aka the mall in Odessa. It’s not huge, but it’s a decent size for being inside of a mall.

The mall in Odessa also has an ice skating rink. (I worked there in high school.) You can bring your own skated or rent some of theirs. Sessions are for two hours.

For $5 you can tour the The George W. Bush Childhood Home. Home to two Presidents, two Governors and a First Lady, this remarkable 1950s restoration gives visitors a unique perspective of the Bush family and their legacy, insight into the restoration of this modest home and provides an interesting view of life in 1950s Midland. The home is located at: 1412 West Ohio Avenue, Midland, Texas 79701.

For more things to do in Odessa check out our list of fun finds. This is also where you will find some seriously tasty restaurant recommendations and unique bars to visit.

15 Things to do in Midland, Texas 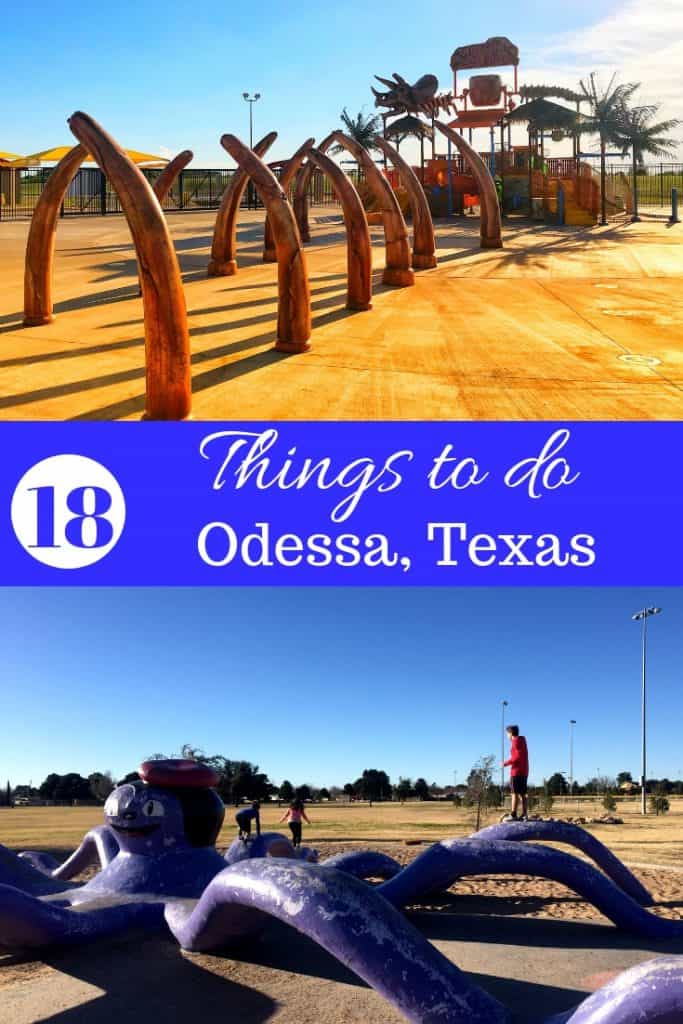 There are some interesting things to see around the area that are worth venturing out to. 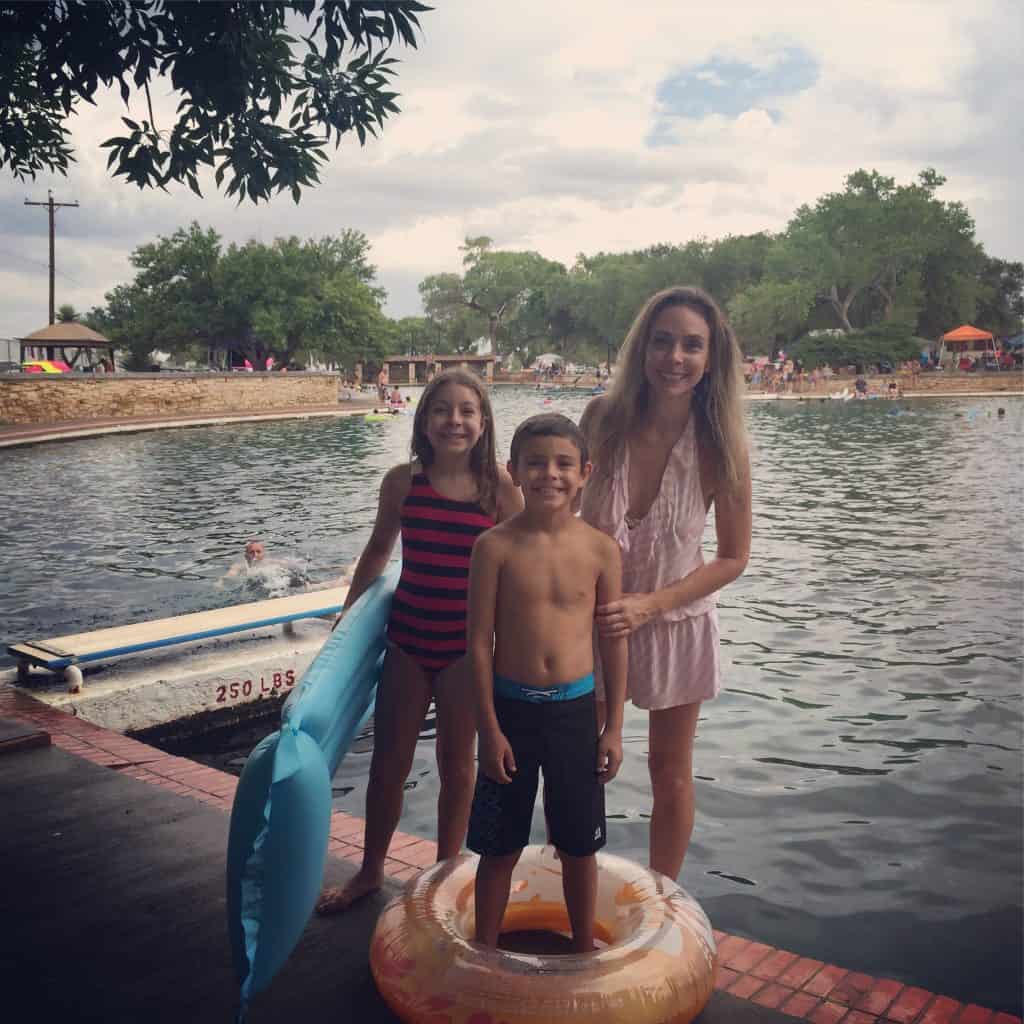 One of the best day trips is Balmorhea State Park, home to world’s largest spring-fed swimming pool built back in the 1930’s. Here you can swim, scuba, or skin dive, camp, geocache, and bird watch. The park has picnic sites, an outdoor sports area and a playground. More than 15 million gallons of water flow through the pool each day, gushing from the San Solomon Springs. The pool is up to 25 feet deep, covers 1.3 acres, and holds 3.5 million gallons of water. The water temperature stays at 72 to 76 degrees year-round. It’s deep, so if I recommend putting kids in a life jacket.

The Monahans Sandhills State Park is a 3,840-acre state park just 31 miles west of Odessa. You can rent sand disks at the park headquarters and slide down the dunes for $2 for 2 hours. The park is open daily, but the gate may be locked after 10 p.m. on some holidays. My kids LOVE doing this.

3 hours from Odessa is Carlsbad Caverns National Park. It is located within the Chihuahuan Desert of southern New Mexico. It features more than 100 caves. The Natural Entrance is a path into the namesake Carlsbad Cavern. Stalactites cling to the roof of the Big Room, a huge underground chamber in the cavern.

The Guadalupe Mountains are a great place to go hiking with 80 miles of hiking trails. Within this National Park is the world’s most extensive Permian fossil reef, the four highest peaks in Texas, an environmentally diverse collection of flora and fauna, and the stories of lives shaped through conflict, cooperation and survival. Come experience mountains and canyons, desert and dunes, night skies and spectacular vistas.

McDonald Observatory is located in the Davis Mountains of West Texas 2 hours and 20 minutes from Odessa, under some of the darkest skies in the continental United States.

McDonald Observatory welcomes the public at the Frank N. Bash Visitors Center for star parties and exhibits. Weather permitting, guided star parties are held weekly at the Rebecca Gale Telescope Park, which now features, among a wide variety of 8-24 in telescopes, the Wren-Marcario Accessible Telescope (WMAT) with wheelchair access, available to all guests. 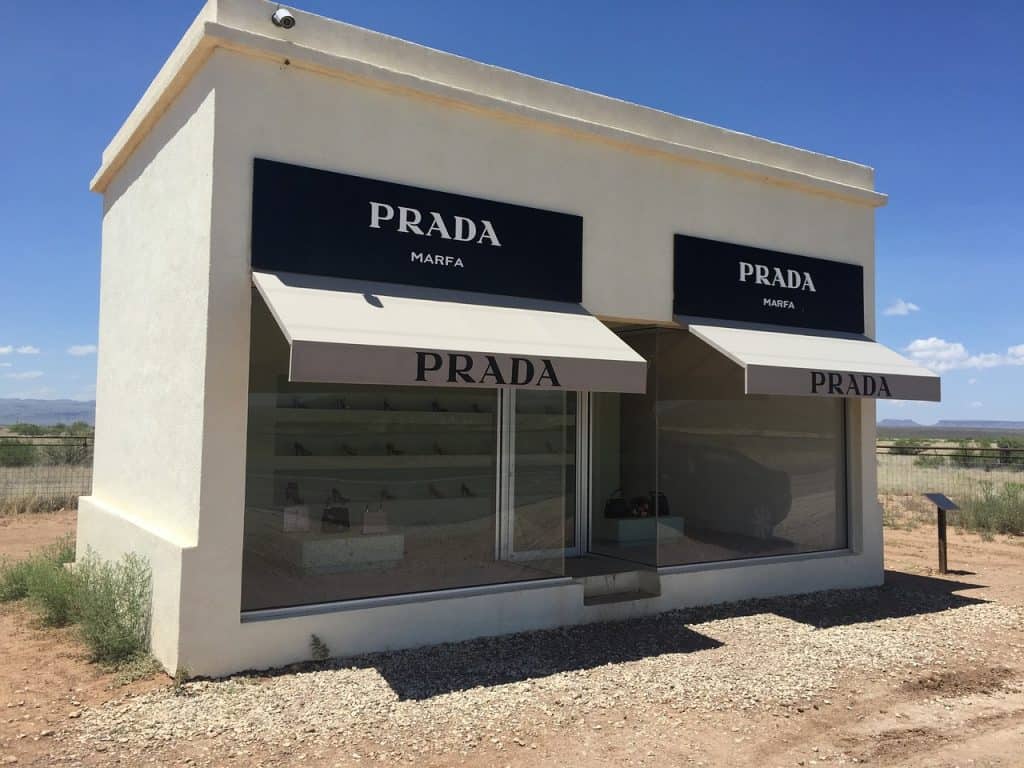 Marfa, a small desert city in west Texas, is known as an arts hub and a 2 hour and 40 minute drive from Odessa.  The town was established in 1883 as a water stop and freight headquarters for the Galveston, Harrisburg and San Antonio Railway. Nowadays its back in the public eye for having this random Prada store! But they are best known for the Marfa lights, near U.S. Route 67 on Mitchell Flat east of Marfa. They have gained some fame as onlookers have ascribed them to paranormal phenomena such as ghosts and UFOs.

You should consider making this an overnight trip and stay in a teepee at El Cosmico.