10 things to do in Philadelphia, Pennsylvania

10 things to do in Philadelphia, Pennsylvania

Philadelphia, Pennsylvania is a fascinating city in the northeast of the United States. This American destination is often overlooked for the bright lights of New York City, but it’s only 90 minutes away by train or car and shouldn’t be missed! It also comes without the sticker-shock of New York prices. While it’s a big city, the sixth-largest in America, it doesn’t swallow you up. Philadelphia is a city of neighborhoods that’s rich in culture, history and delicious regional foods to try. Spending just one day in Philadelphia will be enough for you to fall in love with the city.

10 Things to do in Philly

Preparing for a trip to Philadelphia can be a lot of fun because there’s just so much to do and see in the city. There are so many attractions in Philly that it can be hard to know where to begin, so here’s a list of the top 10 things to do in Philadelphia.

Anyone who has been to an American restaurant has heard of a Philly cheesesteak – it’s on almost every menu. The cheesesteak is a must-try item while visiting Philadelphia. Every local has their own favorite cheesesteak place in the city, and visitors shouldn’t be afraid to ask a local where to go. That’s how to get the best advice and avoid tourist traps, like the most famous spots, Pat’s and Geno’s. Skip the tourist traps and ask a local, or head to our favorite place in the Manayunk neighborhood, just north of the center city. It’s called Dalessandro’s Steaks and you won’t be disappointed, just be prepared to wait in line because it’s that good!

You’ll also want to try a soft pretzel. Most of the original colonists of Philadelphia were of German descent and they brought with them the art of pretzel-making. With limited ingredients, bakers were left to create their own interpretation of the German treat. Thus, the Philly soft pretzel was born and you can try one in many locations across the city. Check out Philadelphia Soft Pretzel Factory for one of the best, and if you go in the morning you can catch them while they’re hot and fresh.

Philadelphia has one of the richest histories of any city in the United State of America. On top of that, it has some of the most well-preserved old cities you will find in the country. Philadelphians are proud of the national heritage they get to live around and ensure that local landmarks are protected from development.

One place in the city to step back in time is along Elfreth’s Alley. It’s a stretch of cobblestone street in Philadelphia’s Old City with a history dating back over 300 years. With 32 houses built between 1728 and 1836, this street is beautiful and fascinating. This block of houses can be found between 2nd and Front Streets and Arch and Quarry Streets. It’s the oldest continuously occupied residential block in the country with the first citizens moving to Elfreth’s Alley in 1702. In the center of the block, you’ll find the Elfreth’s Alley Museum. It features rooms of the home restored to 1700s decor and guides explain the history of the street, the city and the famous residents who once called Elfreth’s Alley home.

Philadelphia is full of world-class museums, but if you want an off-the-beaten-path experience, check out the Mütter Museum of Medical Oddities. Built in the late 1800s, the original purpose of this museum was for biomedical research. In fact, it’s still owned and operated by the College of Physicians of Philadelphia.

If you’ve got an interest in medical specimens, you can view countless skeletons, tumors, cysts, and nearly every human organ. There are over 20,000 items that rotate through exhibits including the tallest human skeleton in North America. Another of the popular permanent displays is Einstein’s brain, the only place in the world where you can publically view slides of Albert Einstein’s brain.

It may not be your normal, everyday museum experience, but a trip to the Mütter Museum is a great stop in Philadelphia.

Another cool Philly attraction is found in the hip neighborhood of Fairmount. A stone’s throw from the Philadelphia Museum of Art, you’ll find this vibrant neighborhood with sidewalk cafes, lively pubs and the former home of American mobster Al Capone. Yes, Capone once lived in Philadelphia at the Eastern State Penitentiary.

Touring a former prison isn’t on every itinerary, but it should be when you visit Philadelphia because of the incredible history at Eastern State Penitentiary. It’s even home to many lingering spirits and considered one of the most haunted places in America. The site has been featured on several television shows and documentaries.

The prison is a National Historical Landmark and is open for public tours seven days a week from 10 am to 5 pm.

Betsy Ross is a popular figure in Philadelphia and the history of the American Revolution. It’s said that Betsy Ross designed the first American flag at the behest of George Washington himself. Her former home and seamstress shop are open for tours and display in Philadelphia. The home was restored in the 1930s using original pieces and others taken from demolished period homes in the area. One of the most interesting parts of Philadelphia is experiencing the history of the great city and those who helped shape the fate of the United States, and Betsy Ross is a woman who also had a hand in the early days of the country.

Located on the Delaware River waterfront, the Spruce Street Harbor Park has grown from a pop-up beer garden into one of the city’s best outdoor spaces. The park is filled with hammocks, picnic tables and chairs where you can sit and enjoy the waterfront view with family and friends. There are plenty of games, from giant Jenga to bocce, and lots of street food and craft beers to choose from. The park is open from spring to fall,and is now a foodie-haven as some of Philadelphia’s best restaurants and chefs have set up stands throughout the park. We recommend that you come in the evening so you can see it both in daylight and fully illuminated by the stunning strings of LEDs that canopy the park.

This is the core of historic Philadelphia and is well worth a visit. The guided tour of Independence Hall helps to understand not only the historic nature of the building, but transforms you back to the summers of 1776 and 1787 as the Founding Fathers debated independence from Britain and a constitution for a nascent nation. The Liberty Bell pavilion not only presents the bell, but also walks you through the tremendous symbolic power that this icon possessed through American independence, emancipation from slavery, and all subsequent fights for freedom and liberty.

You can also walk through a minimalist but creative recreation of the President’s House, where both George Washington and John Adams lived as President. The exhibit focuses not on the executives, but on the slaves who lived here, providing an insightful and thought-provoking journey through slavery in the shadows of two great American symbols of freedom, Independence Hall and the Liberty Bell.

And after all this history, be sure to go to Independence Beer Garden, a delightful space across from the Liberty Bell Pavilion that offers craft beers, street food and outdoor games for the entire family.

Arguably more famous as the backdrop for the Rocky movies, the Philadelphia Museum of Art offers one of the premier art collections in the US. The building itself is worth a visit, first for the opportunity to recreate Rocky’s run up the steps, but also to enjoy a stunning homage to Greek temples with a view over Benjamin Franklin Boulevard and the Philadelphia skyline.

Inside, the museum offers a broad collection, with a particular focus on Western and Asian art. The museum contains many Western masters, including Picasso’s “Three Musicians”, which is personal favorite. The Asian collection includes a Japanese Tea House, and there is also a world-renowned collection of medieval armor. Be sure to also head to the Rodin Museum, located a block down the Boulevard. This is the largest collection of Rodin sculptures outside Paris and is a beautiful garden to wander on a nice day.

We believe that the best way to see a city is from on high, and Philadelphia offers an incredible way to do this at Bok Bar. Located on top of an old high school, Bok Bar is a rooftop terrace bar and restaurant that sits in the middle of South Philadelphia. The bar has a nice collection of craft beers and local specials, and the restaurant has a variety of Middle Eastern inspired offerings. If you only come here for a beer and a view, stay to explore the East Passyunk neighborhood for a number of incredible bars and restaurants. Bars like P.O.P.E. have an incredible beer selection, and restaurants like Bing Bing Dim Sum take traditional Asian fare and create something completely unique.

Fairmount Park is one of the largest urban parks in the US, spanning both sides of the Schuylkill River traveling northwest from Center City Philadelphia. The park contains a number of attractions, ranging from the kid-oriented Please Touch Museum, the Mann Center concert venue (and summer home for the Philadelphia Orchestra), and the Philadelphia Zoo. All of these are worth a visit, but the highlight we recommend is a run or bike ride along Kelly Drive. Kelly Drive is a road along the eastern bank of the river, running from the Philadelphia Museum of Art to Main Street in Manayunk. Between the road and the river is a biking and running path that winds past Boathouse Row and a number of exhibits of public art. On the weekends this is where Philadelphians train, and you can see why it is so popular.

Guest Post: Derek Hartman and Mike Walsh are a couple from Philadelphia who have been living abroad in Copenhagen Denmark since 2017. They have been to over 40 countries combined and love sharing their travel experiences as much as they love visiting new destinations. Their move to Europe was even documented on the American television show, House Hunters International. Derek and Mike started their travel blog, Robe Trotting, to cover their life abroad as world travelers and started a destination website on their new hometown called Everything Copenhagen. 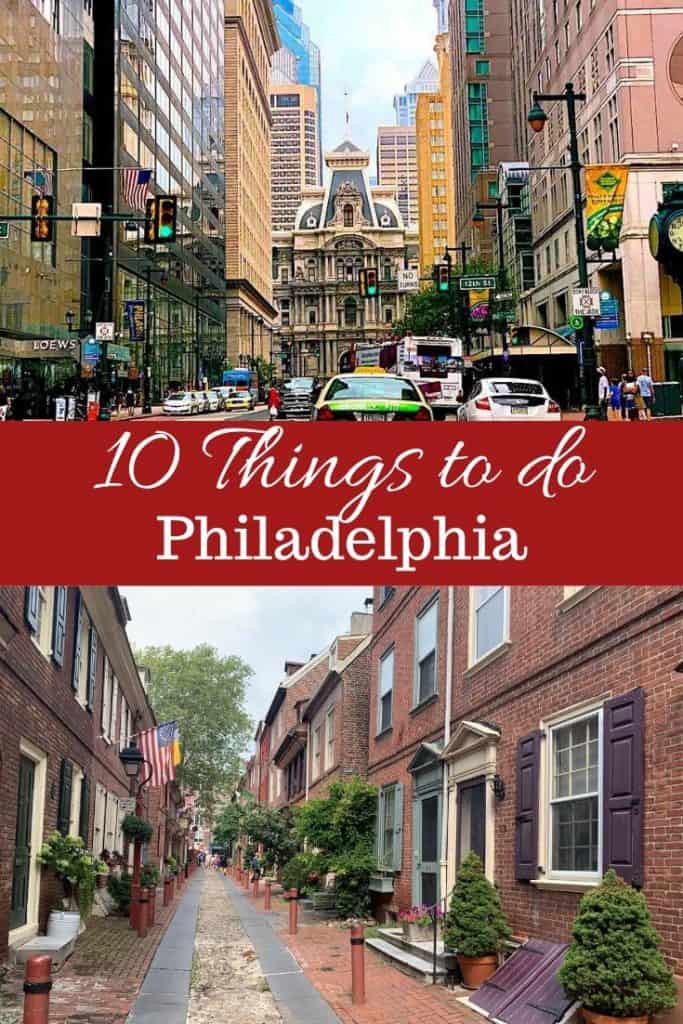