Top 15 Attractions Not to be Missed in Cincinnati

Top 15 Attractions Not to be Missed in Cincinnati

The Queen city Cincinnati located along the Ohio River in southwest Ohio offers a huge variety of fabulous tourist attractions. Cincinnati is one of the famous tourist destinations in the USA. Plan your vacation to Cincinnati with this list of attractions. Besides sightseeing, it offers a number of things to do, from sporting events to the annual Tall Stacks Festival. Below are some of the attractions that you should not miss when you visit Cincinnati. 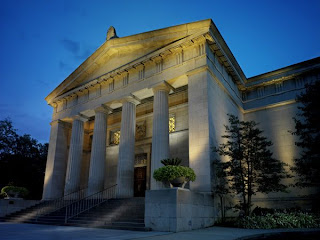 We love Cincinnati. There are few cities we’ve visited that were more of a surprise to me than here. On pretty much every level I was surprised what Cincinnati had to offer, including the food scene, cool bars in the Over-the-Rhine district, and of course all the interesting things to do. From museums to theme parks to outdoor adventures they offer a bit of everything.

This museum is dedicated to modern and contemporary art. You can explore more than 60,000 objects, spanning 6000 years of world art. Here you will find a painting collection that includes the great works of old European masters like Titian, Halls, Rubens, Cole, Harnett and Wood.

A signature Spot of Cincinnati, this Fountain square with its sculpture explains the sustaining uses of water. It is the best known and loved symbol of Cincinnati. You can stand gazing at it without turning your eyes for minutes on end. 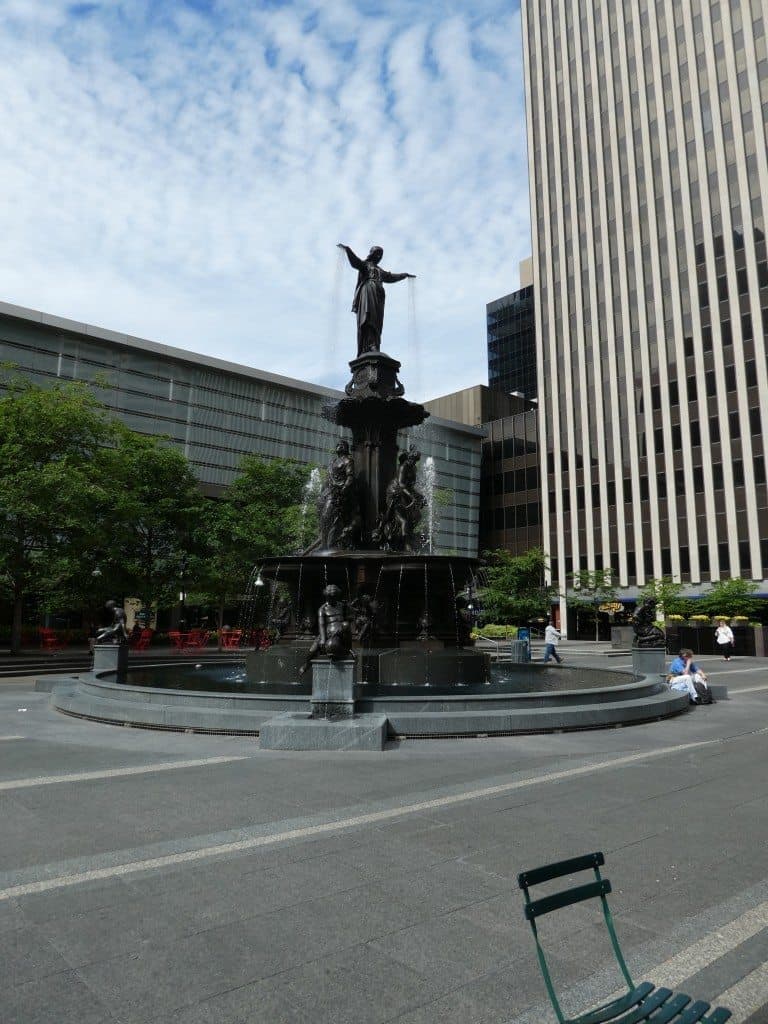 Eden Park is a lovely and peaceful park in Cincinnati. It has a mirror lake that allows children to play and stroll around the fountain. It is an ideal place for hiking, biking and rock climbing.

It is one of the oldest zoos in the country. You will find more than 500 animals and 3000 plant species here. You can see everything from Komodo Dragons to Indian Elephants, to giant walking stick insects.

Located in the northeastern portion of Cincinnati King’s Island is one of the Midwest’s largest Theme and water parks. Take a spin on the thrill rides and roller coasters for a slice of adventure.  There are also many live shows to entertain you.

This favorable landmark is a massive countered wall of steps.  These steps act as informal bleachers for riverfront events enjoyed by locals and tourists. You can revel at the speed boat races held at the river fronts and take in the general atmosphere.

Carew Tower is one of the most famous landmarks of Cincinnati completed in 1930. On the 49th floor of the Carew tower you can enjoy one of the city’s most spectacular views. It is one of the most inexpensive must not miss spots. The tower is located in downtown. Fun Fact: The structure is the second-tallest building in the city. 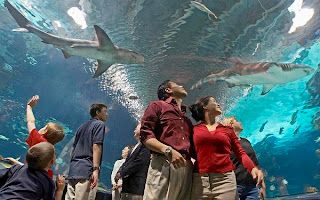 You can walk through the tunnels of glass to watch sharks swimming overhead and around. You can find penguins, jellyfish, alligators and octopus. Explore the underwater amazement’s that nature has to offer without getting wet.

This bridge connects Cincinnati and Kentucky. You can skate or walk along the bridge and reach the shopping area of Kentucky.  It is the best place for good wine and fine dining. Or visit the numerous shopping areas for your souvenirs. Fun Fact: I still rollerblade and so of course I had to rollerblade across the bridge.

Ideal for cooling off the water park is a splashing place for your family and kids. You can find spurting jets of water and high water fall cascades that dip you into joy. 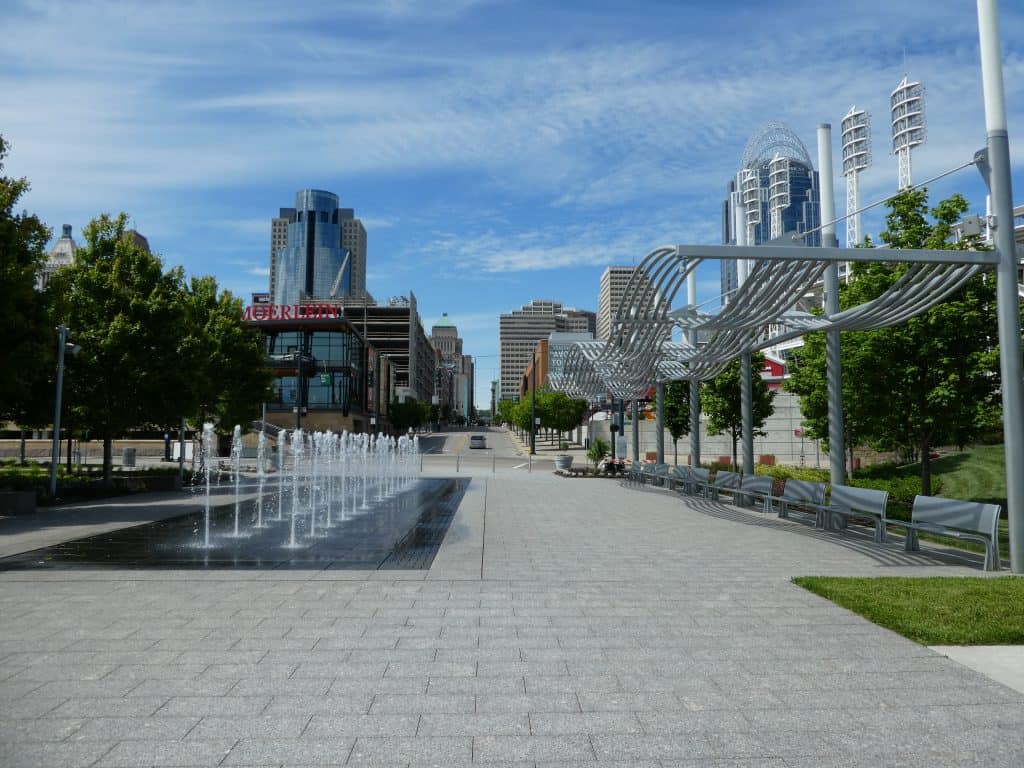 There are lots of food tours in Cincinnati, but this one is my favorite. It’s in the morning, before it gets too hot and you get to try lots of delicious sweets. I am pretty sure you can take your kids on this tour. 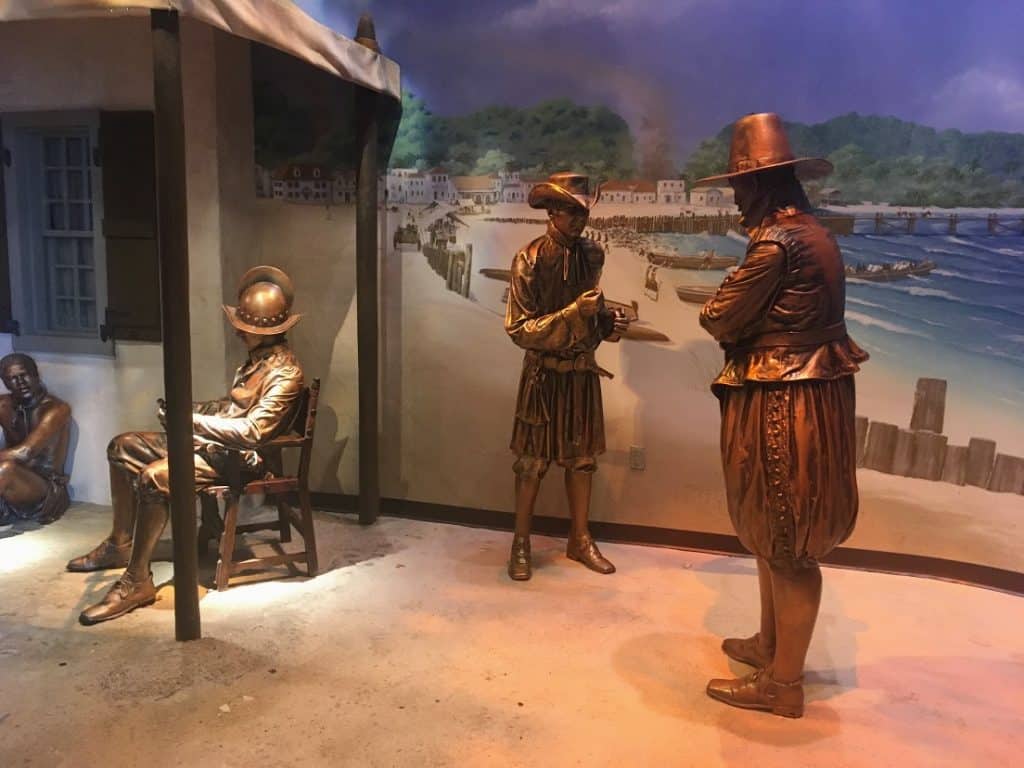 Cincinnati is not as famous as some other historic American cities like Philadelphia or Boston. But in its own way, Cincinnati has made many contributions to American history. In fact, Cincinnati was an important stop on the Underground Railroad before the Civil War. People escaping slavery from neighboring states like Kentucky often stopped in Cincinnati to hide with local abolitionists.

If you’re interested in learning more about the stories of these brave men and women, Around the World in 24 Hours suggests a stop at The National Underground Railroad Freedom Center when you are in Cincinnati. You’ll learn about heroes like Harriet Jacobs, who was born enslaved. She escaped from her captor by hiding in a small space underneath his house for seven entire years. After she got away, she wrote a famous book called Incidents in the Life of a Slave Girl.

You can also learn about how local people in Ohio helped the Underground Railroad. One of the most famous abolitionists in Cincinnati was a lawyer named Salmon P. Chase. (Yes, his parents named him Salmon.) He helped defend the rights of runaway slaves in court. Eventually he became Supreme Court Justice, and he was the first Supreme Court Justice to allow African-American lawyers to argue cases before the Supreme Court.

The Underground Railroad Freedom Center sometimes hosts special exhibits about other freedom fighters like Nelson Mandela, so be on the lookout for that when you visit. And be sure to check out the real piece of the Berlin Wall in the back of the museum. It was a gift from the city of Berlin as  a testimony to Cincinnati’s role in helping ensure freedom for all people.

Listermann Brewing has been a popular brewery in Cincinnati since 2008, and is only becoming more sought after by craft beer lovers. Listermann’s showcase beer is Nutcase, which is a porter with rich peanut butter flavor throughout, without being too sweet.

The space itself is fairly simple beyond their small bar area lined with their consistently awesome beers on draft. There are long tables filling a rather bare-bones room, but with fun elements like Touch Tunes and board games available for entertainment.

Even without those extras, Listermann is honestly set up to be the perfect hang out spot, and we just enjoy catching up with one another on each visit. Even though Theresa from Fueled by Wanderlust continues to check out new breweries on each visit to Cincinnati, Listermann continues to sit at the top of her list. 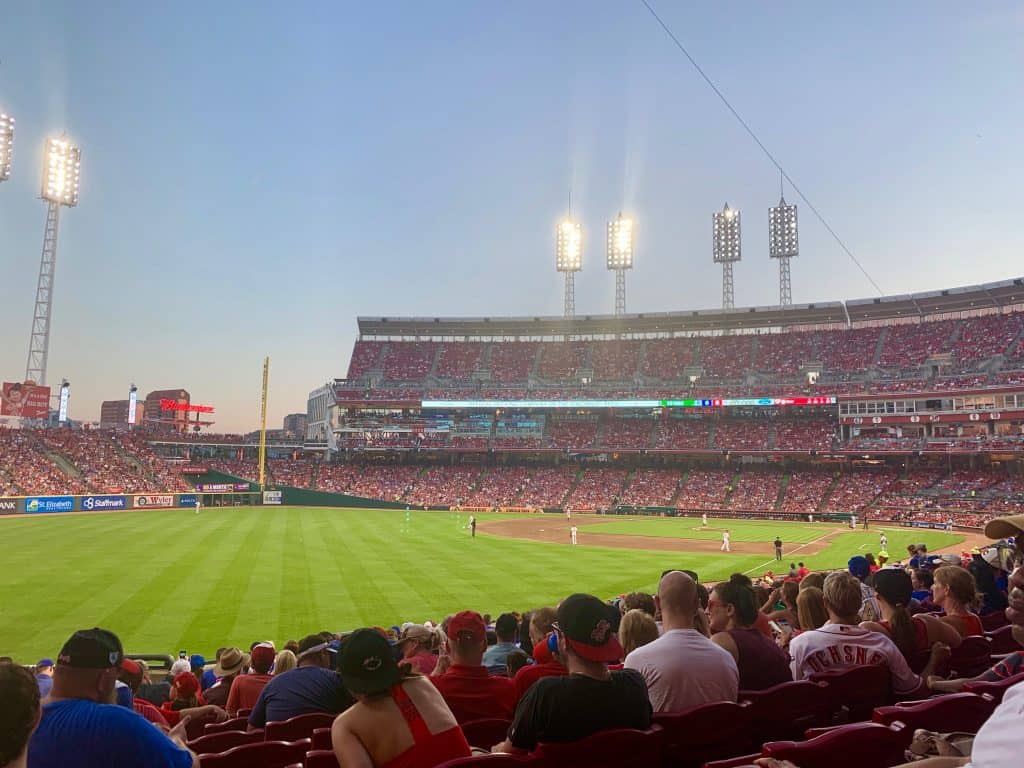 Cincinnati is the birthplace of professional baseball, so attending a Cincinnati Reds Game at the Great American Ballpark is a must when you’re visiting the city according to Sydney from A World in Reach.

Tickets for Cincinnati Reds games can be quite affordable compared to other Major League Baseball teams around the country. One of the cheapest ticket options is a ticket for the FiOptics District. For $15, you’ll exclusive access to the FiOptics Rooftop as well as general admission access to seats in sections 408-410. You’ll even get a drink credit, which is redeemable for an alcoholic or non-alcoholic beverage. No matter where you’re seated in the stadium, kids will love the entire game experience, from trying to catch foul balls to having their picture taken with Mr. Red, Mr. Red Legs, Gapper, or Rosie Red, the mascots of the Cincinnati Reds.

The Cincinnati Reds play at Great American Ballpark, which is conveniently located in the middle of Downtown Cincinnati. If you have some time before the game, spend some time at the Reds Hall of Fame and Museum, which is adjacent to the ballpark. Here, you’ll be able to learn all about the history and the legacy of the Cincinnati Reds. Kids age 12 and under are admitted for free!

Located in historic Over-The-Rhine just north of downtown Cincinnati, Findlay Market is a must-visit when in the city. The oldest market in the region is spread out across a big square comprising dozen indoor merchants selling everything from produce, spices, and flowers to meat, fish, and poultry. I happily noticed that the majority of artisanal and specialty foods on sale are locally sourced and produced. On weekends from April to November, the market hosts a farmers market with dozens of outdoor vendors, numerous street performers, and occasionally special events. Be prepared for many people in a small space, particularly on Fridays and Saturdays. However, I never had to wait fairly long at any of the places. While here, be sure to explore the surrounding neighborhood, rich in 19th-century architecture and notice the numerous murals scattered about. Findlay market remains one of my favorite markets no matter how many countries I’ve been to. It is easy enough to get here. If arriving by car, there is a designated parking lot. Alternatively, it is a quick walk or trolley ride from Washington Park.

Looking for more, check out our guide to to Cincinnati with even more things to do, places to eat, bars worth visiting, and more. 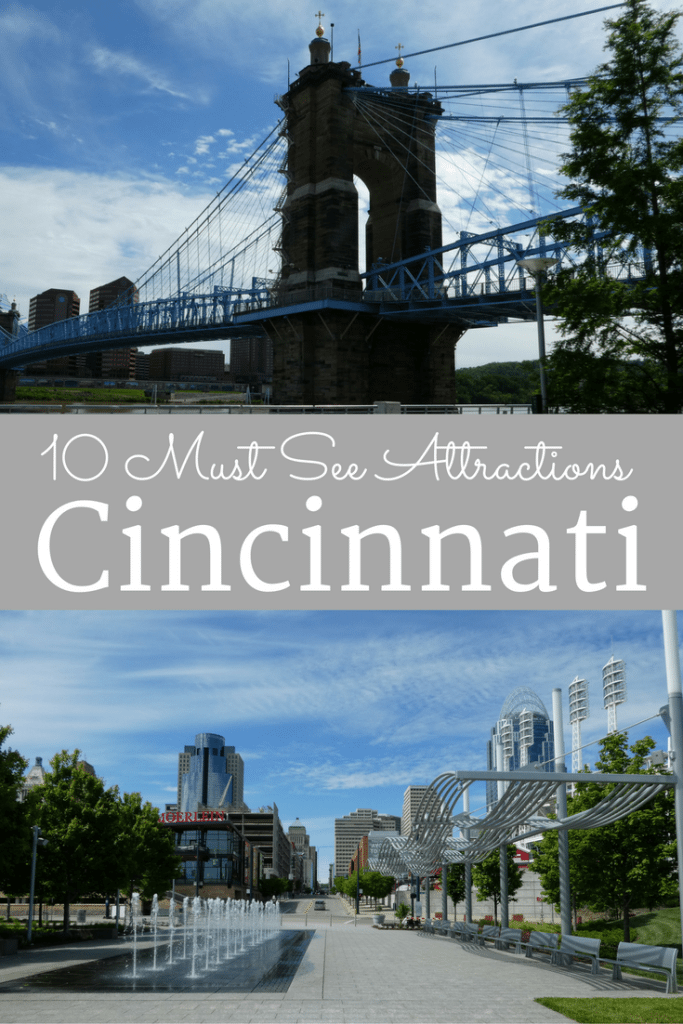