Are you traveling to London with teens? If you are, we know just where to take them. Keep reading to see what teens will enjoy the most in London. 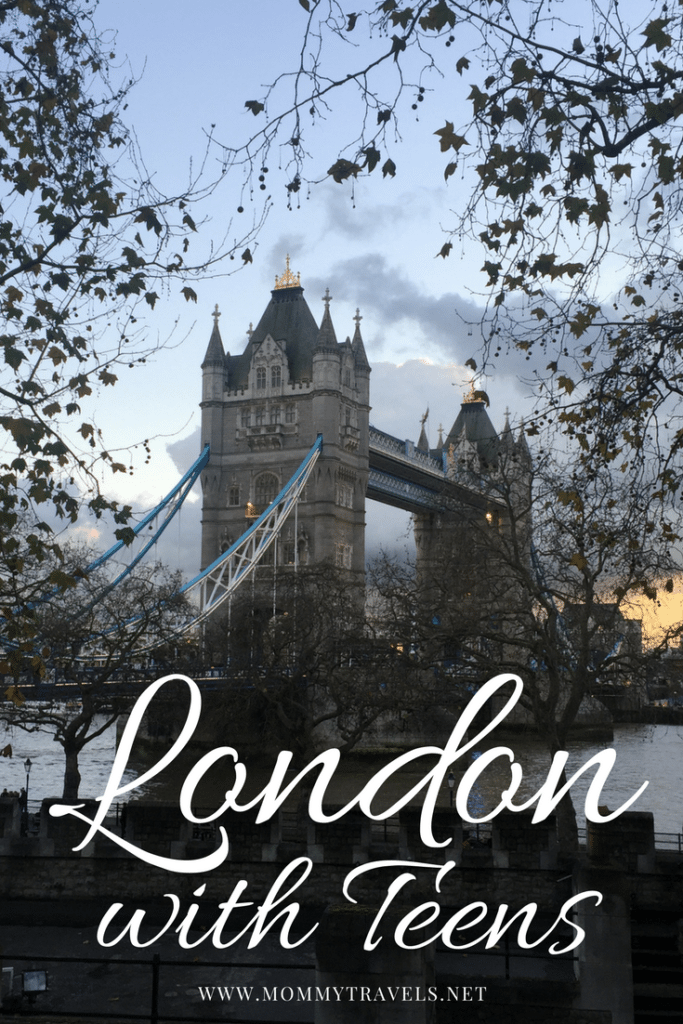 One of my dear friends Sally is from England and she goes back off and on with her kids. She was kind enough to write this for Mommy Travels.

Recently our family has arrived in the land of the teenager. The eye roll, the totally unimpressed stare and the lack of interest in anything but computer games. Spending hours at the beach making sand castles or family hikes up local waterfalls no longer cut it without an I-pod sealed into the ear canal. They have been there done that. It was with this scene in mind that I recently set off on a trip to England with my opinionated fourteen year old son.

Being a British citizen living in America for 17 years, one of my main desires for my kids is that they know and love my homeland England. As I contemplated a trip back home for my Dad’s 70th birthday party, I decided I would take my fourteen year old son. The week, as always, would be filled with family visits “haven’t-you-grown” and “last time I saw you were six”. I knew I would have to do something to sweeten the pot. I did, and this is how our trip turned out to be a huge success.

First, I asked him what he wanted to do, then added a little of what I wanted to do. The plan was a day in London that was all about him. Keep in mind this is his fifth trip to England (yes, spoiled I know). The usual candidates, Buckingham Palace, Tower of London, open top bus tour were not on the schedule. This time the emphasis was Harry Potter, Doctor Who, souvenirs, British Museum and a bit of culture thrown in by Mum.

So our day began with a train trip to King’s Cross station. You haven’t really been to England if you haven’t experienced the hectic but very efficient public transportation system. King’s Cross Station is the location of Platform 9 ¾. The famous platform where Harry Potter and his cohorts catch the Hogwarts Express and the real adventure began. We set off for Platforms 9 and 10 and what we found was that it was necessary to pay to get on to those platforms. You actually had to be going somewhere and planning to use the train! Can you imagine? DON’T DO THAT, because what you are actually looking for is a little to your right. It’s a photo opportunity and nothing more. A brick wall has been set up with a luggage trolley embedded into it. There was a short line and a small fee to get your picture taken entering the magical platform. My 14-year-old claimed it was lame and refused to line up. However, other people, perhaps bigger Harry Potter fans, clearly thought it was worth it. There is also a Harry Potter souvenir shop there. It was well stocked with all things Harry Potter, but it’s small and won’t take you long to navigate. The whole King’s Cross experience won’t take you longer that 20 minutes.

From there, it is easy to get around on London’s underground transportation system (from now on referred to as the tube). There is a huge information desk and maps in the middle of the station. What you want is an all-day travel pass for zone 1. If you’re sightseeing in London you will probably never leave Zone 1. The cost is about $6 for adults and $4 for children. Get yourself a tube map you will need to refer to it constantly. The tube map is easy to figure out really. Each tube line is assigned a different color. You find where you want to go, figure out what that line is called for example “the Piccadilly Line” or the “Central Line” or just the color of the line and follow the signs. Step two is to figure out which direction you need to go on a line. You can do that in two ways. You can figure out if its Northbound, Southbound, Westbound or Eastbound, or you can trace your finger to the end of the line and remember the name of the last station.

Okay, now I realize I may have misled you a little. This was the location of the first eye roll and “so embarrassing” quote. At first I wasn’t sure of the correct ticket zoning for what I wanted to do. My son was SO EMBARRASED that I asked for help and SO EMBARRASED that I was carrying a map, as it “made us look like tourists.” My thoughts on that.

The information people are super helpful and you could easily spend more than you need to, buying a ticket for all zones. Ask for help it’s their job.

Everyone on the tube is carrying a tube map. We ARE tourists after all. 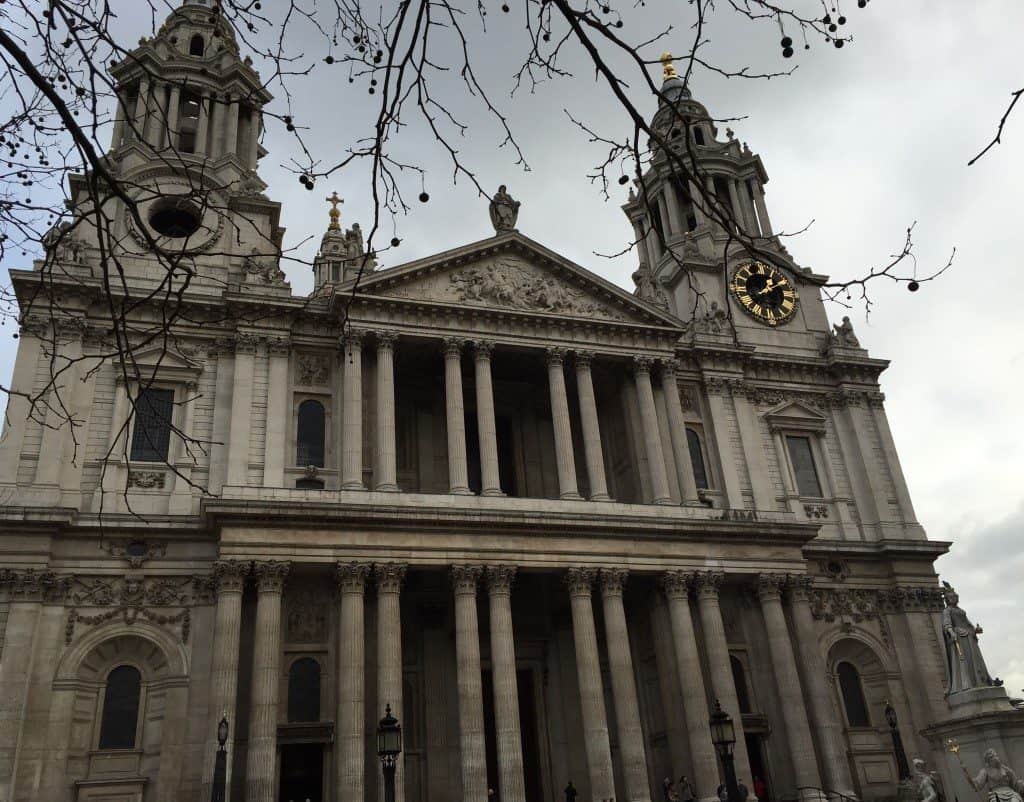 Next stop for us is St. Paul’s Cathedral. Requested by my son who has some interest in architecture. So, at King’s Cross Station take the light blue line Southbound to Oxford Circus. Then the Red Line Eastbound to St. Paul’s. As you come out of the tube station St. Paul’s Cathedral is behind the station. My son just wanted to see the outside and it was, in fact, one of the few things he took pictures of. There is the option to go inside and look around with a guided tour. It costs $25 a person.

Right across from St. Paul’s was one of many, many, similar touristy shops. They are everywhere. They are fun and cheap and just the place for teenagers to get cool stuff for their friends back home. Many items such as pens, pencils, t-shirts, sweatshirts and bags with union jacks, tube maps and old red telephone boxes on them are available and deemed “cool”. My son spent about $15 and came away with several little statues o Tower Bridge, Buckingham Place, and Tower of London. He also acquired some Union Jack Pencils and a t-shirt. This is also a great place to get the most popular soccer team uniforms at cheap prices. They aren’t quite the real deal, but for $30 less than the authentic item price, picking up one for my younger son was a must. 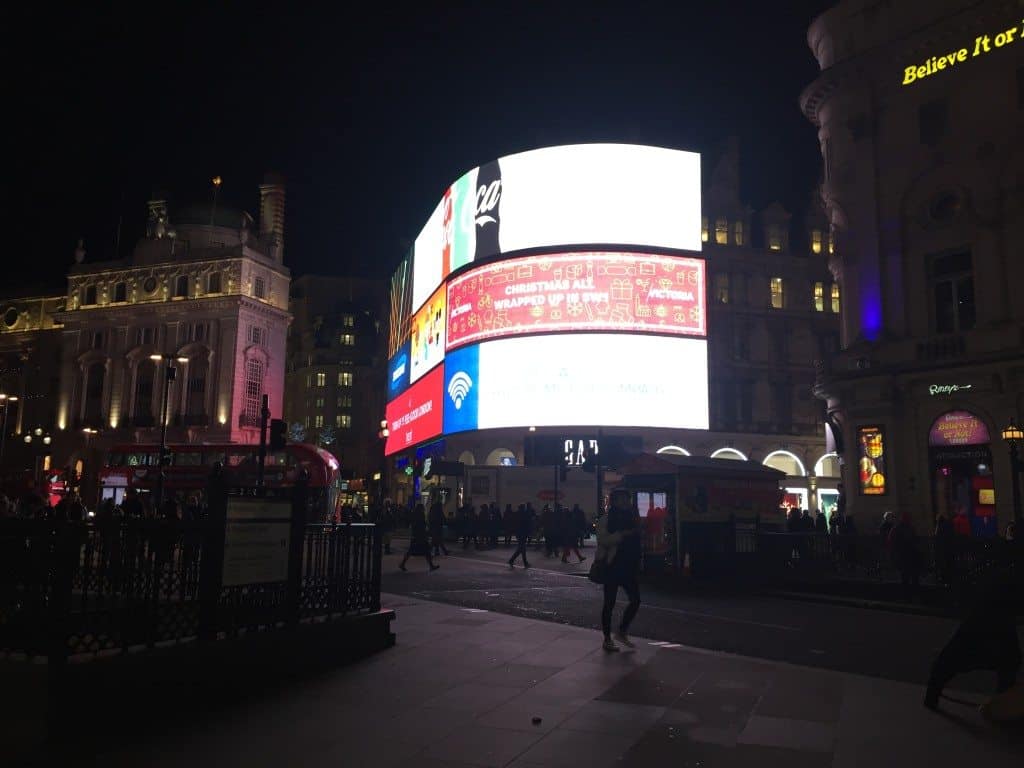 There is a frenzy of hustle and bustle here. What we were looking for was a bite to eat since walking and working our way through London can drain your energy quickly. There is every choice of fast food imaginable, just stepping out of the tube station, we saw KFC, Burger King and Fish and Chips. I’m not proud to say we ate fast food but when you have a teenager in London suddenly it becomes a great option. Every price point and every taste can be accommodated at Piccadilly Circus. This is a must stop. 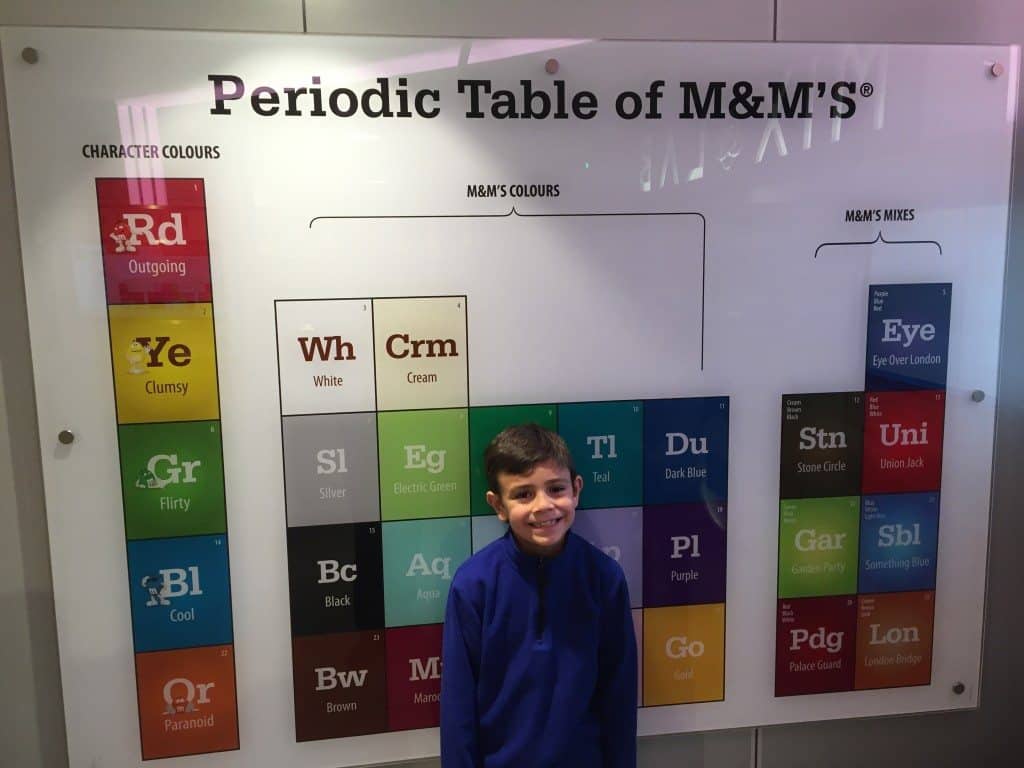 Since we were totally on foot and public transportation, it was important to the success of the day that my son ate well and liked what he ate. It is expensive to eat in London. At least with fast food we know what we were getting for our money and that he would actually eat it. It was here that we stumbled across the M and M shop. Anything you could possibly want with M and M’s on it? M and M pajama pants? Whatever. I guess someone wants them. Not the reason we came all this way.

After the visual bombardment of Piccadilly Circus, and a little lunch, we went back to Holborn tube and with the help of my trusty A to Z map, walked to the Forbidden Planet. Forbidden Planet is the best sci-fi shop in England with everything sci- fi you could possibly ask for. My son is a huge Dr. Who fan and he was very pleased to spend an hour there looking at posters, t-shirts and miscellaneous objects relating to any sci-fi series you can think of. (Note: you can buy all this stuff online and in America now where you don’t have to pay British prices but it seems that it meant SO MUCH more when it was actually bought in England). Teens will love this place and the hordes of young teens present in the store confirmed this. 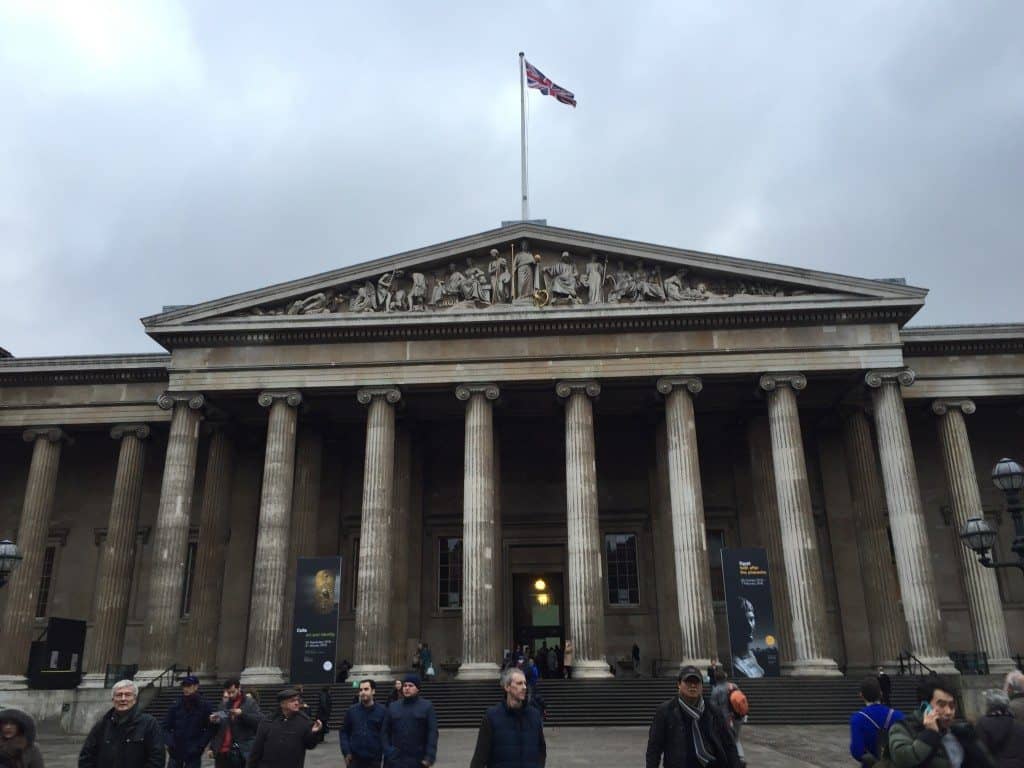 A short walk from Forbidden Planet is the British Museum. An amazing building jam-packed with artifacts that the British “acquired” during their conquests (see “A Night at the Museum 3” which is set in the museum). From Egyptian mummies, to Spartan helmets to the Rosetta Stone, we spent three hours there. I loved the clock room. A room full to the brim with clocks invented and designed since the beginning of time itself. This museum like all the big London Museums is free and terrific. The museum closes at 5 pm so give yourself enough time.

At 5 pm we walked the few blocks to Covent Garden, an area alive with street performers and every option of places to eat from around the world. We chose Gyros from Turkey. Keep in mind we have now been walking around and exploring for close to seven hours. A long day in London for anyone. We weren’t done yet. Covent Garden is the location of several great theaters and the plays they put on are amazing and are on par with the best of New York City. We had opted ahead of time to see “War Horse”.

Expensive at over $50 per ticket but well worth it. It was incredible and unless you have been to Broadway to see a show my guess is you have never seen anything like it. My son was gripped all the way through and claimed it was “the highlight of his trip”. No more eye rolls from my son. Eyelids firmly shut as we travelled home after the play. Awesome day, awesome memories.

Need a cheap place to stay check out this family friendly hostel in London.