Trolls has it all, it’s visually stunning, humor suited for both children and adults, several feel-good lessons for children to learn, and catchy music. Every year, a few children’s movies come out for kids to delight in. They are usually filled with catchy songs, cute characters, and are usually very visually pleasing, thanks to modern technology. The themes, almost always include some type of moral lesson.

But what makes a children’s movie great?

Anybody with a kid knows that a child is perfectly content watching the same movie over and over and over again. In fact, they demand it. So, if you’re one of the parents who is subjected to this, it’s important to make sure that the movie is worth watching repeatedly. One of those great movies is Trolls. It’s got everything both children and parents want in a movie: visually stunning, humor suited for both children and adults, several feel-good lessons for children (and even some adults) to learn, and catchy music. The different celebrities with small roles in the movie also provide extra entertainment. James Corden, Gwen Stefani, and Russell Brand are just a few of the celebrities that had small parts in the movie, but nonetheless delivered a great performance.

The plot of these types of movies is usually predictable. Trolls mostly follows this trajectory with a few plot twists thrown in here and there. The main theme of the movie: where does happiness lie? The trolls are the self-proclaimed happiest creatures on the planet. Trolls are their names. Singing, dancing, and hugs are their game. The one exception is one of the main characters, Branch. The realistic and pessimistic troll, Branch, lost his enthusiasm for typical troll fun after a bad encounter with a Bergen. Bergen’s are an unhappy ogre type species that believe they can only be happy after eating a happy little troll. The Bergens even turned the eating of Trolls into a yearly ritual they call Trollstice.

The story really begins when Princess Poppy, played by Anna Kendrick, the happiest troll of them all, decides to throw an epic party to celebrate the 20th anniversary of the trolls fleeing Bergentown to escape being eaten. They’ve been Bergen free for two decades, but unfortunately, the party brings in unwanted attention and the trolls are rediscovered by a Bergen. Some of Poppy’s best friends are abducted by the Bergen and Poppy takes it upon herself to go and rescue them.

The story follows the journey of Poppy and a reluctant Branch, whom Poppy enlisted to help her, as they face the dangers of the forest and Bergentown to save their friends. Through their many adventures, they befriend an understanding Bergen named Bridgette, played by Zoey Deschanel, and guide her through a budding romance with the king of the Bergens. Deschanel did a beautiful job playing the role and her voice, as always, was flawless for her song performance. The movie has many heartwarming moments and in the end, Branch discovers what it means to see the world through rose-colored glasses, while also helping Poppy discover the true meaning of friendship after being burned by one of her closest friends. They even help the Bergens discover the meaning of happiness along the way. Much to the Bergens’ surprise, it does not come from ingesting trolls!

Visually, the film is stunning. It is bright and beautiful. The animation is something to behold. Plus, all the cool tricks the trolls can perform with their multi-colored, magic hair is quite entertaining. There is no shortage of things to look at in this movie. Every time I watch it with my three-year-old, I discover something new. Even in the dreary Bergentown, where everything is supposed to look depressing, it is still really cool looking. The details of the forests and town are second to none. Even the forest creatures were imaginative and the “scary” ones were still pretty.

Justin Timberlake was the head music producer for this film, so it is no surprise that the music in this movie is awesome. It is filled with tons of catchy covers from the 80s as well as a few original songs, including last summer’s smash hit: “Can’t Stop the Feeling.” My daughter constantly sings and dances along to this song and all the others from the movie. In my personal opinion, the best song featured was a cover of Cyndi Lauper’s “True Colors.” Not only was it extremely fitting given the main characters’ colorful hair, but it also gave the talented leads of the movie the opportunity to really show off their natural talent. 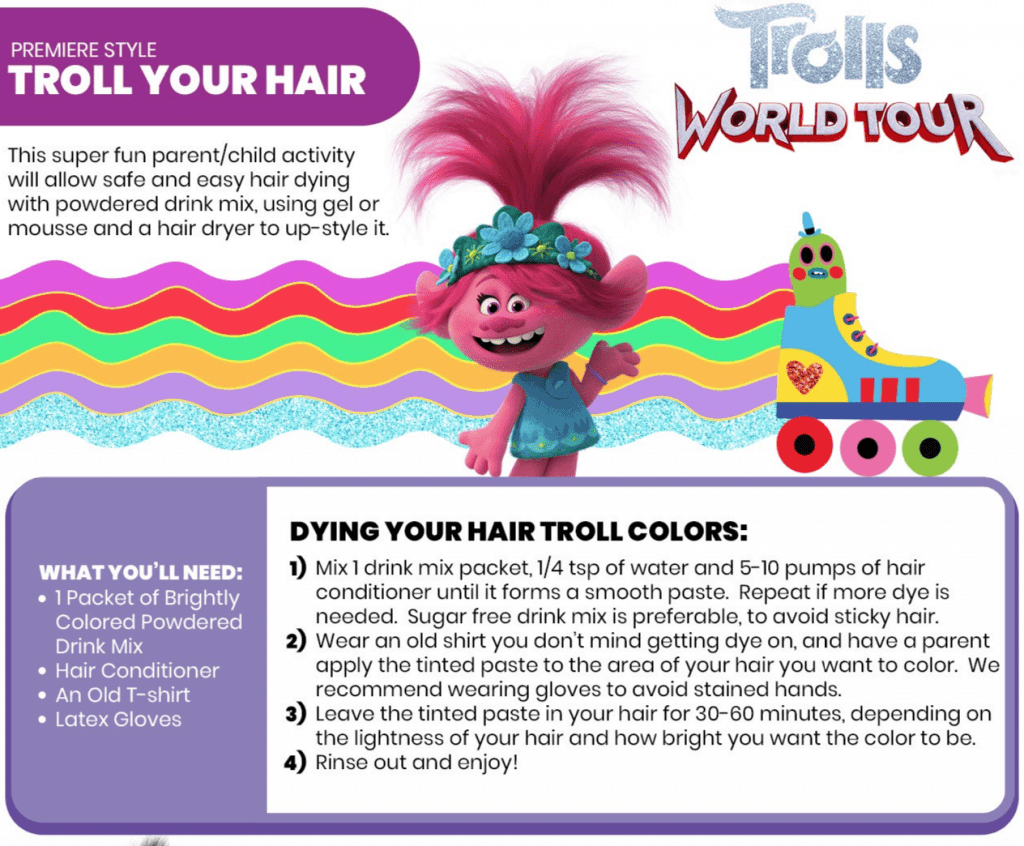 As a parent, I really appreciate the humor of the movie. The movie was very funny to both my daughter and I, which I find invaluable because I will inevitably have to watch her favorite kid’s movies repeatedly. One unexpectedly hilarious character was cloud guy. Cloud guy had valuable information that Branch and Poppy needed to continue on their journey. He only required one thing: a high five from Branch, who really detests giving high fives. The scene that plays out is very funny, with humor that only an adult can appreciate and goes right over kids’ heads. There are much less mature, but very light-hearted scenes that both my daughter and I both appreciated as well. Another one of my favorite, funny details is the troll who only sings in auto-tune. The random details are part of what makes this movie so great!

All in all, “Trolls” is a great movie that I would recommend to both children and adults. I have seen it about ten times now and it still hasn’t gotten old. The visual aspect is incredible and I don’t believe anybody should miss out, the music will have both children and adults dancing in their seats, and it is funny enough to entertain the masses. The moral of the story is sweet. It’s also a helpful reminder that almost everyone needs to hear once in a while. Happiness is not something you obtain from outside sources. It is something that everyone can have, no matter what the circumstance. “Trolls” delivers a beautiful and entertaining way to deliver that message.