Vacation to Italy and Spain

Vacation to Italy and Spain

Our travels were amazing and we took about 1500 pictures. So, I have lots of blogging to do. Each city was neat and each was completely different from the others. My favorite was Venice, Italy, and friend’s favorite was Rome, Italy. We can’t wait to take the kids to Italy someday, but probably not Spain.

Rome, Italy was our first stop and we saw as many things as we could in four days. There is just so much to see and do. We both loved the Sistine chapel. We loved all the history and the amazing churches. We enjoyed hanging around the pantheon and Novena plaza. It was so relaxing and the food was great as was the beer and wine.

Venice, Italy was stunning. We did not do much here but walk around, eat, drink, and hang out. We went on a gondola ride just a little before sunset and hardly anyone else was in the canal at this time so it was peaceful and private and the bottle of wine we took on was the best wine we had the whole trip. After we got done with the gondola we went and found a quiet little area and sat on the steps looking at the water drinking the rest of our wine.

By the time we traveled to Barcelona we were worn out. We flew to the wrong airport (Thanks, Ryan Air). We had one very long bus ride, some confused walking around, and a taxi ride that we weren’t sure they guy understood us!  We arrived at our hotel at two in the morning. Much to our delight, it was a five-star hotel and we ordered lots of room service so we weren’t starving when we went to bed. The next two days we did a bus tour, strolled Las Ramblas, and through the Gothic quarter. We squeezed in the Picasso Museum, Sagrada Familia, and other sights and spent our last day laying at the beach.

Madrid was very different than all the other places we visited.

We had the chance to go to three art museums while vacationing in Madrid, Spain. The Prado, Reina Sofia, and Thyssen-Bornemisza Museum. So far, the best artwork I have ever seen in person was in Spain.

The Reina Sofia museum is free on Sunday mornings from 10 am – 2:30 pm and on Mondays, Wednesdays, Thursdays, Fridays, and Saturdays from 7 pm to 9 pm.

I believe all of the art in the post is in the Reina Sofia. The Museo Reina Sofía Collection comprises more than 21,000 works. I don’t think we were able to take any photos in the other museums. 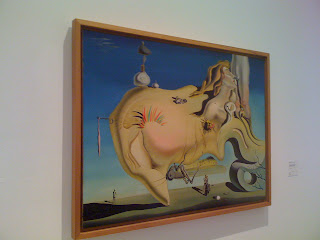 These first two paintings are Salvador Dali’s. Dali is best known for the striking and bizarre images in his surrealist work. I have to say the name of that first painting almost ruined it for me. 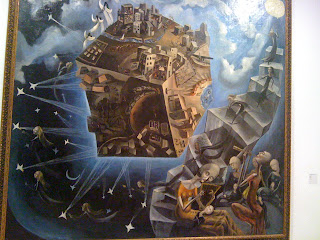 This one is obviously a Pablo Picasso. This one is Picasso’s Guernica. 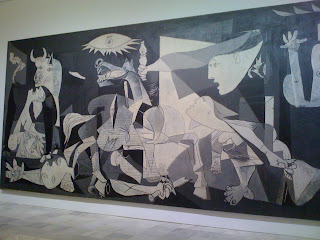 This one are both done by Vallerta (I think) 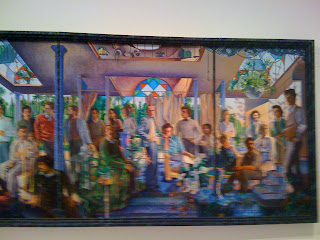 I do not remember who painted this. Can you see the people inside through the window and the person outside of the window to the side? I think my camera had a hard time figuring out where to focus, you can see why. 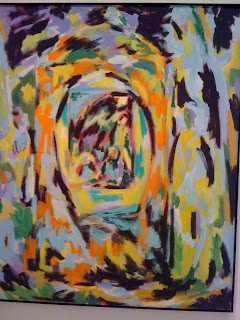 Have you been to Spain? Did you see any good art while you were there? I would love to know what was your favorite artwork in Madrid?

By now we had gotten used to the tapas thing, but found three really great Mexican food places so we ate nothing but tacos and tapas for days. 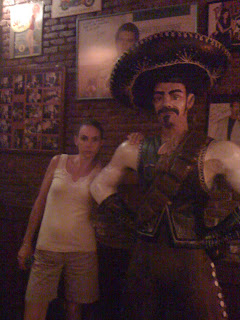 Since then I can not stop thinking about the yummy tacos we had while we were there. If you are traveling there you should really go to all of these restaurants.

La Taqueria – a nice sit-down place where the downstairs is nonsmoking!! I had the tacos al Pastor and they were awesome. My friend had that some sort of chicken dish which was good even though it was not what he thought it was going to be. We also ordered some guacamole and it was very good and a large portion. The wine was cheap and they had good salsa. This was my favorite place I ate while in Europe. The address is Don Pedro, 11 – 28005 Madrid tel. 913651077 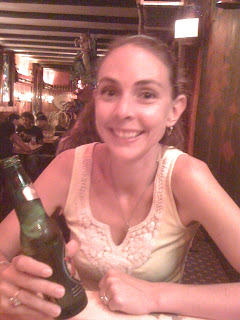 This is me in the downstairs part of La Taqueria

Taqueria Mi Ciudad – is a little hole in the wall with super cheap tacos. They make several types and tacos and they were all good. I am pretty sure we tried all of them. We ate like pigs and our whole bill was 12 euro. I can’t remember exactly where it is, but I think it is on the same street and on the same side as La Mordida!

La Mordida – a nice sit-down place where it is non-smoking!! I had the tacos al Pastor and they were awesome. My husband had that nachos which were good. The wine was cheap and they had good salsa. The address is Bebe y Calla, SL. Las Fuentes, 3 28013 Madrid. tele – 915591136

While we were in Madrid August 15 is some sort of holiday there and it was just one big raging party in the streets. It was so fun. We went back to that area the next night ready to dance and have more fun but I guess they don’t party like that every night.

Take a day trip from Madrid to Segovia.

Well, I could just keep going and going so I will stop for today but will post more soon!