With San Diego’s laid back culture, it’s hard to imagine that it’s actually the second-largest city in California.

The pace of life in San Diego is much slower compared to Los Angeles or San Francisco, which is probably why it has become such a popular vacation destination over the years.

It’s the ideal city to enjoy beautiful views, good beaches, and perfect weather, without having to fly somewhere tropical, like Hawaii.

There are also tons of different things to do in San Diego, so whether you’re looking for an active trip or one that is more laid back, the city has something to offer.

Because there are so many things to see around the city, it can feel daunting to know where to start. My biggest piece of advice is to focus on one or two neighborhoods each day. Any more than that and you’ll feel like you’re spending more time getting to the attractions than actually enjoying them.

With this in mind, I put together a detailed travel itinerary for how to spend a weekend in San Diego, focusing on specific areas of the city each day. 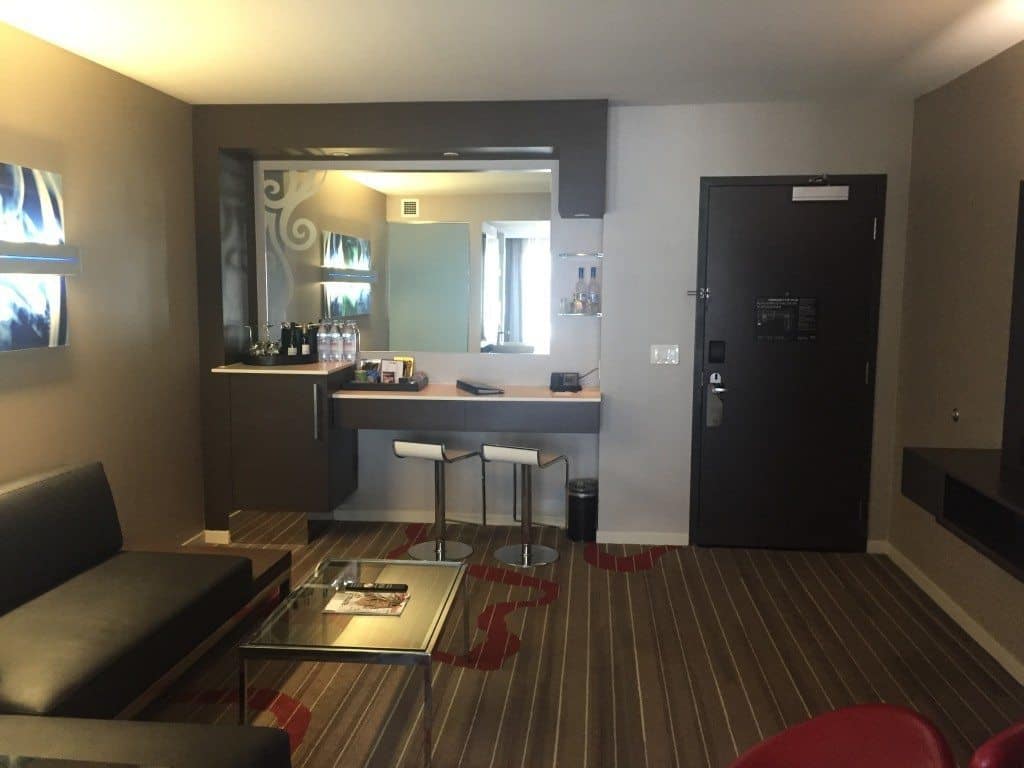 After living in San Diego for five years, this is the itinerary I would recommend to really enjoy the best parts of ‘America’s Finest City’ in a short amount of time.

Start your first day in and around downtown San Diego to see a few of the most popular sights in the city, including the #1 tourist attraction in San Diego – Balboa Park. 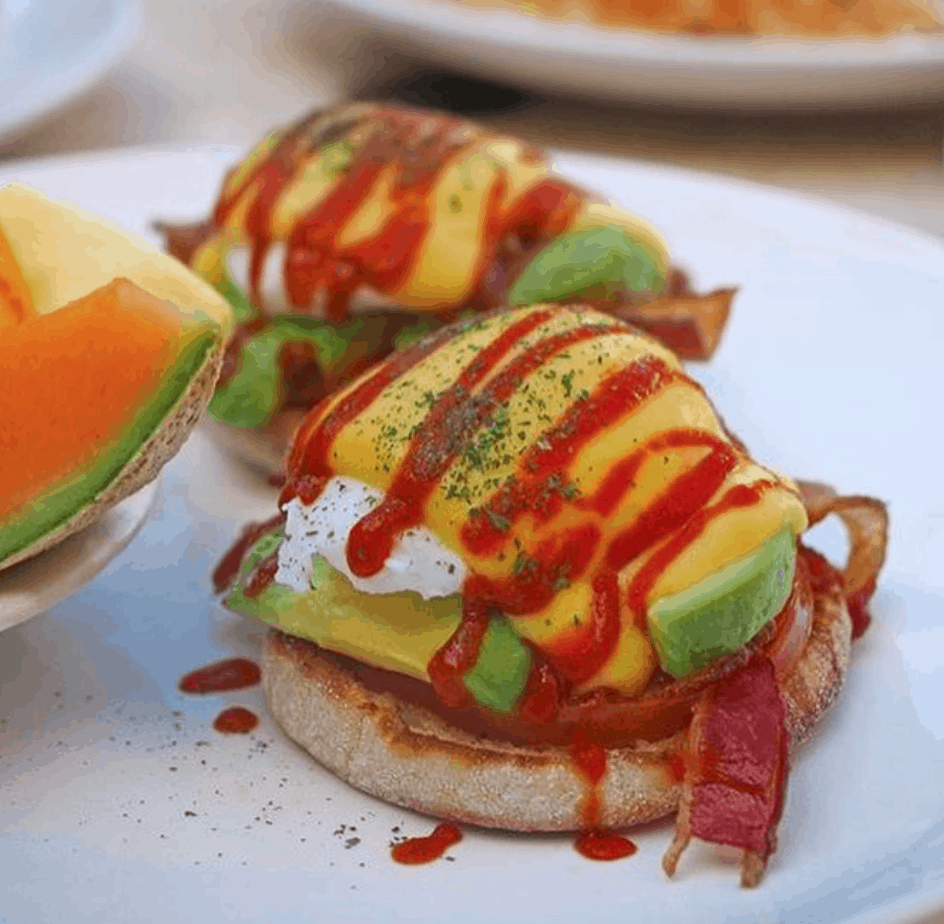 If you’re looking for a quick breakfast and quality coffee to start the day, head over to Bean Bar in downtown San Diego.

The food options are limited to the usual cafe fare and bagels, but the coffee and welcoming staff are phenomenal.

If you want more of a traditional sit-down breakfast, the Broken Yolk Cafe is a popular breakfast spot in San Diego. Try their French toast or eggs benedict.

Get to Balboa Park early in the day to have enough time to explore this huge 1,200-acre park.

One of the best things to do in Balboa Park is to simply walk around its manicured grounds and appreciate the unique architecture within the park. 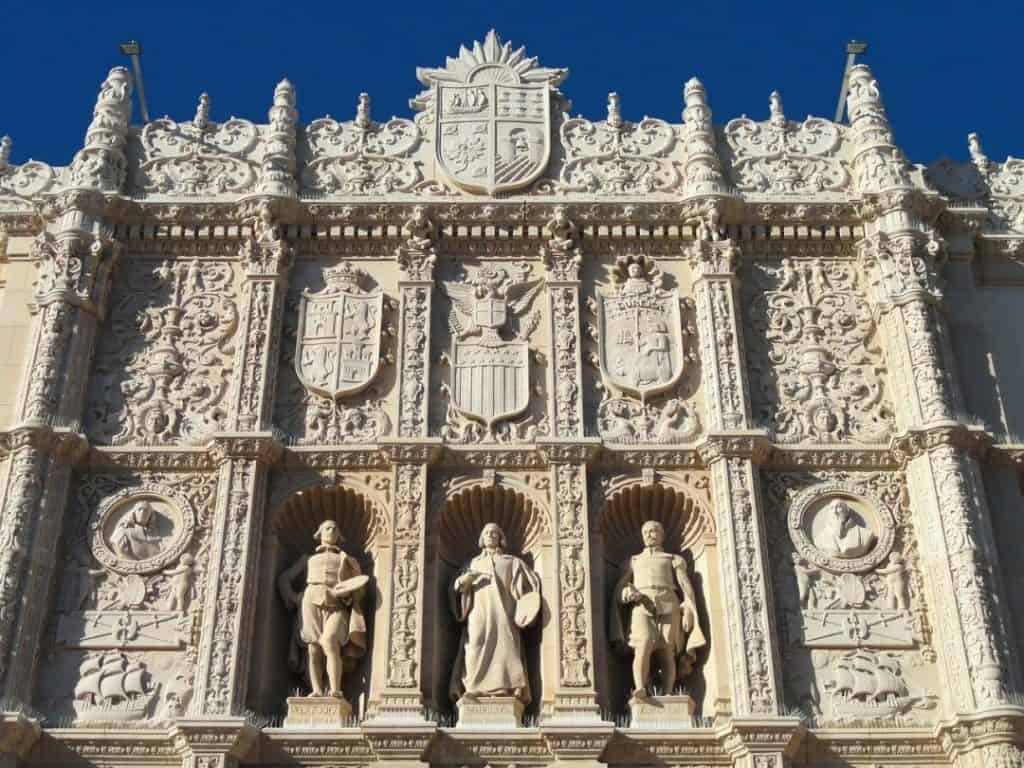 Alternatively, you can check out one of the 16 museums that are housed in the park. My personal favorite if you only have time for one is the Museum of Man. 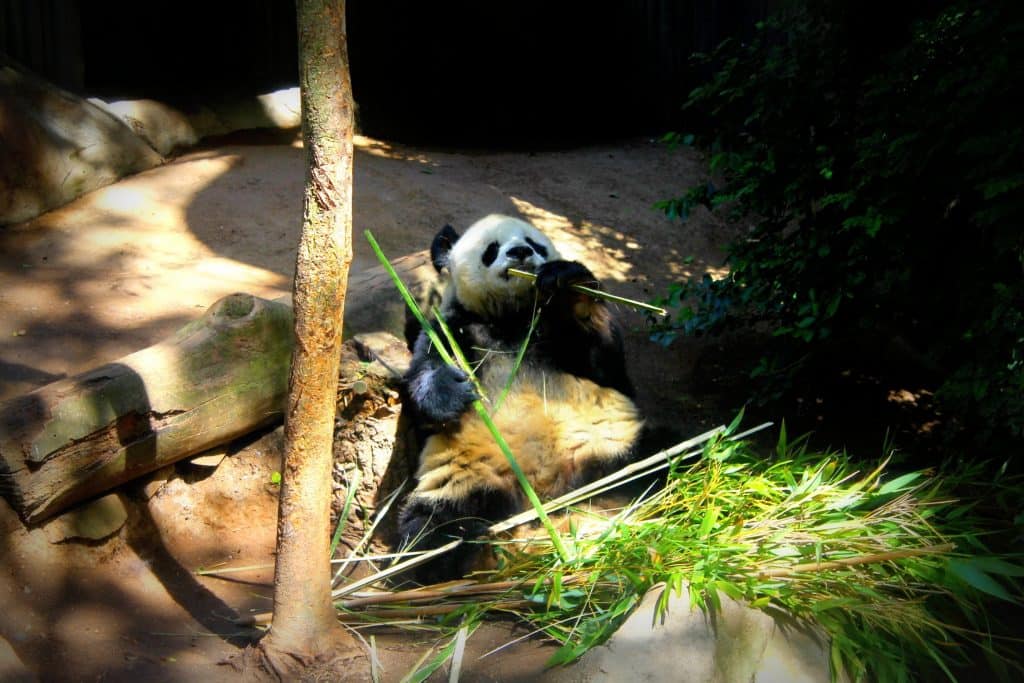 After you’ve had your fill of walking around the park, head over to Balboa Park’s most popular attraction – the San Diego Zoo.

The San Diego Zoo has been voted the #1 zoo in the world for years and you could easily spend a whole day here if you want.

If you love animals and you want to experience all that the San Diego Zoo has to offer, feel free to do just that.

There are over 3,500 animals housed at the zoo, as well as unique exhibits and hands-on tours to keep you busy for a few hours or a full day.

After the zoo, head over to one of the best taquerias in San Diego – Oscar’s Mexican Seafood. They have a location in Gaslamp, not too far from the San Diego Zoo.

Oscar’s most famous must-try dish is their fish tacos.

Some consider these to be the best fish tacos in San Diego, which is a big statement to make in a place that is filled with really good authentic taquerias. 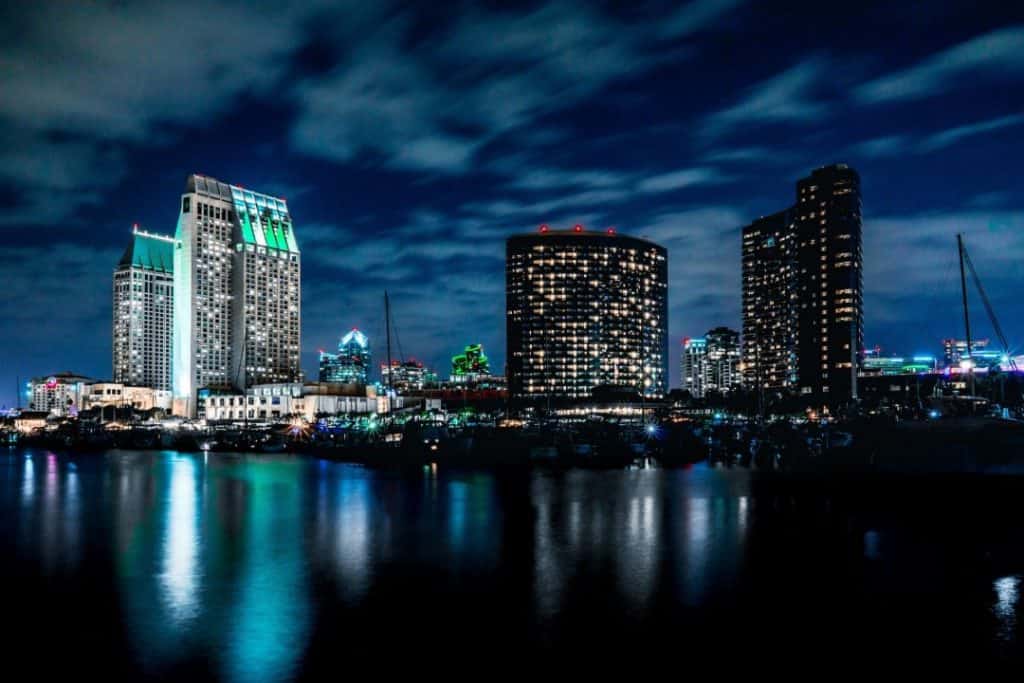 Views from the Embarcadero

After you’ve had your fill of fresh fish, head over to the Embarcadero.

This is a fairly touristy area of the city because it’s also the cruise ship hub, but it’s also one of the best places to take in San Diego’s waterfront views.

Seaport Village is a good spot to start in the Embarcadero as it’s full of boutique souvenir shops and carnival type snacks.

Then, take some time to walk along the wide boardwalk near the water and make your way up to the USS Midway Museum, another popular tourist attraction in San Diego.

The USS Midway Museum is by far the coolest museum in San Diego.

At the museum, you can tour a huge 20th-century naval aircraft carrier through a self-guided audio tour and detailed exhibits, which are geared for both kids and adults.

The museum also features 29 historic military planes that you can walk around and sit inside, as well as flight simulators. It’s an ideal way to learn more about US naval history in a fun and interactive way.

Once you’ve had your fill of sightseeing for the day, head over to San Diego’s Little Italy neighborhood for fresh and tasty pizza.

Filippi’s Pizza Grotto is one of the best family-friendly dinner spots in San Diego with delicious Italian options, big portions, and affordable prices.

Make sure to hold off on the cannolis at Filippi’s and save some room for dessert, because Extraordinary Desserts is another level of amazing when it comes to wowing your taste buds.

Some of the best desserts I’ve tried in my life have been at Extraordinary Desserts. From hazelnut cake to passionfruit cheesecake, this is the best place to satisfy your sweet tooth in San Diego.

Their desserts are fairly big, so it’s usually a good idea to split one with a friend or make sure you have a lot of room leftover from dinner. 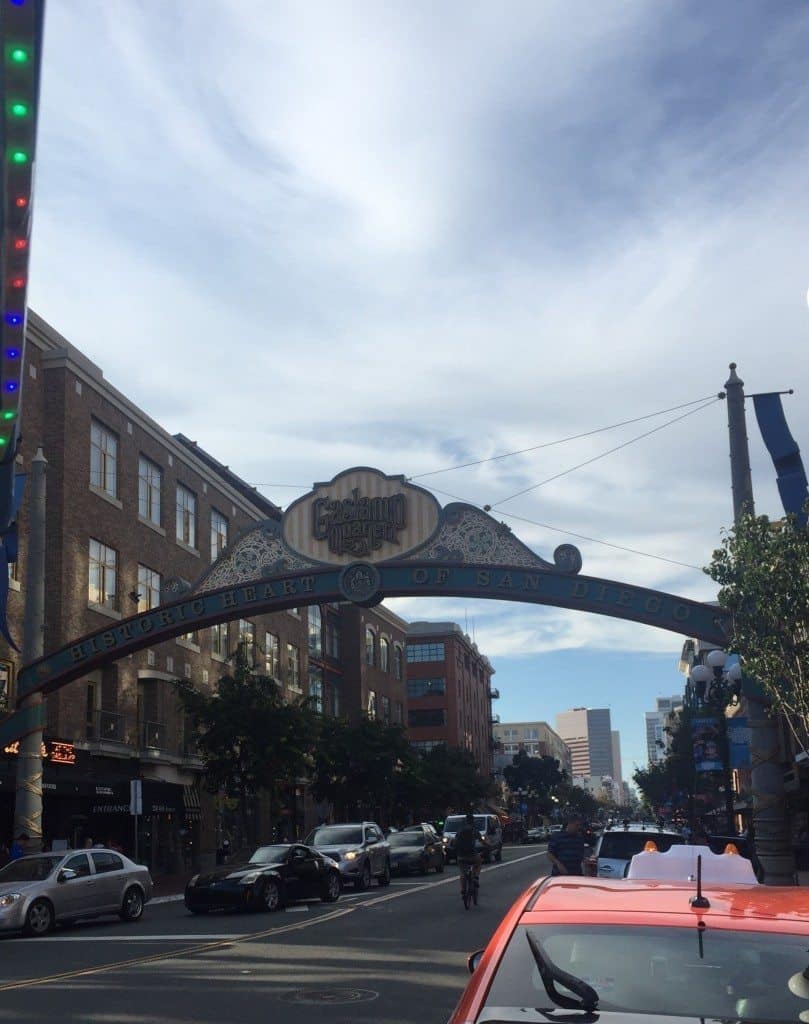 If the food coma hasn’t hit yet, finish off your first night in the city by walking around the Gaslamp Quarter in downtown San Diego.

This historic part of the city is bustling on any night of the week, but especially on the weekends, it’s a good spot to walk around at night to people watch and take in the energy of downtown San Diego.

If you’re looking to experience San Diego nightlife, this is one of the best neighborhoods to go out in San Diego on the weekends.

You’ll find everything from dive bars, to clubs and classy cocktail bars. A few of the best nightlife spots in the Gaslamp Quarter include Tipsy Crow, Barleymash, and Prohibition Lounge. 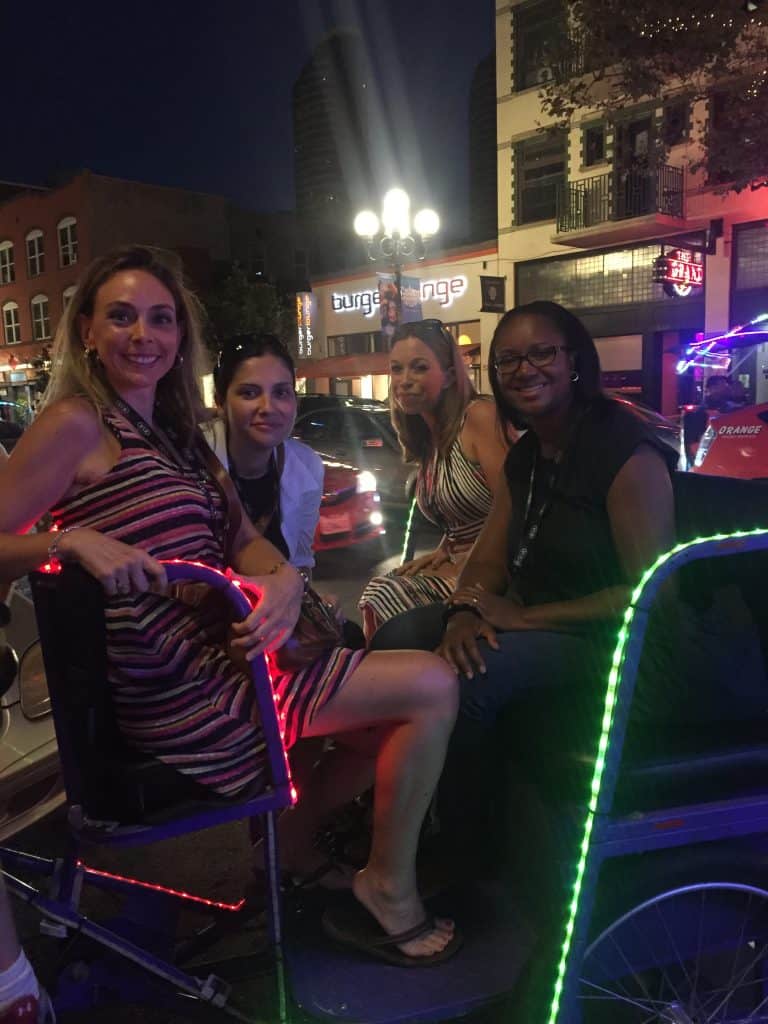 Use your second day to explore the more local neighborhoods of San Diego, including Mission Bay, Ocean Beach, and North Park. These areas of the city will give you a better feel for local San Diego culture.

Start your second day off in the beautiful Mission Beach neighborhood by grabbing breakfast at The Mission.

Offering fresh breakfast options and big portions, this is one of the best breakfast spots to try out in the Mission Beach neighborhood and a good way to start the day. They’re most famous for their heavenly French toast.

You can’t have a weekend in San Diego without spending at least one afternoon at the beach, and one of my favorite beaches in the city is Mission Beach.

This is where you’ll see locals and tourists alike working on their tan, playing volleyball, and enjoying all that this lengthy beach has to offer.

One of the best things to do in Mission Beach is simply walk up and down the beach boardwalk to take in the ocean views and good weather.

At the end of the Mission Beach Boardwalk, you’ll find Belmont Park – a historic amusement park in San Diego that’s right on the beach.

It’s worth spending an hour or two going on the park rides, which are good for a variety of ages,  for some adrenaline-inducing fun in the sun.

Don’t miss out on the most famous ride at the park, the Giant Dipper Roller Coaster, which gives you both thrills and stunning coastal views that go on for miles.

After getting your thrills in for the day, head over to the other side of the channel to Ocean Beach, where you’ll find two popular San Diego lunch spots – Hodad’s and Phil’s BBQ. Both are delicious and worth trying, so it really depends on what you’re more in the mood to eat for lunch.

Hodad’s is where you’ll find some of the best burgers in San Diego, so if you’re craving juicy burgers and onion rings fried to perfection, this is the place to go.

And Phil’s is where you’ll find the best barbecue in San Diego. If you’re craving finger-licking barbecue ribs and good craft beer, this is the better spot.

As a side note, if you’re vegetarian or vegan, Hodad’s will have more options for you. They even have a vegan burger on the menu and meatless cheeseburgers if you still want the cheese. 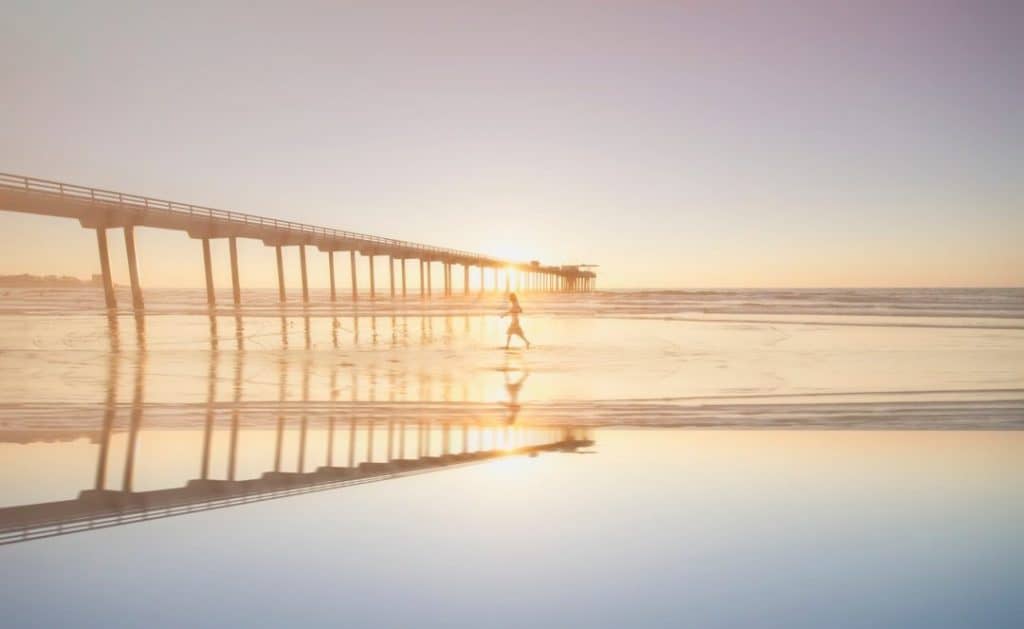 Ocean Beach is the hippie bohemian neighborhood of San Diego and where you’re sure to come across some interesting characters.

The hippie shops that line the main streets are fun to poke your head into and maybe even purchase a few unique souvenirs from.

And, Ocean Beach itself and the pier are stunning to walk around at any time of the day to watch the surfers and take in the views.

Make sure to spend some time after lunch appreciating the views and local culture of the Ocean Beach neighborhood.

If you are looking for more beaches check out the 15 best beaches in Southern California. 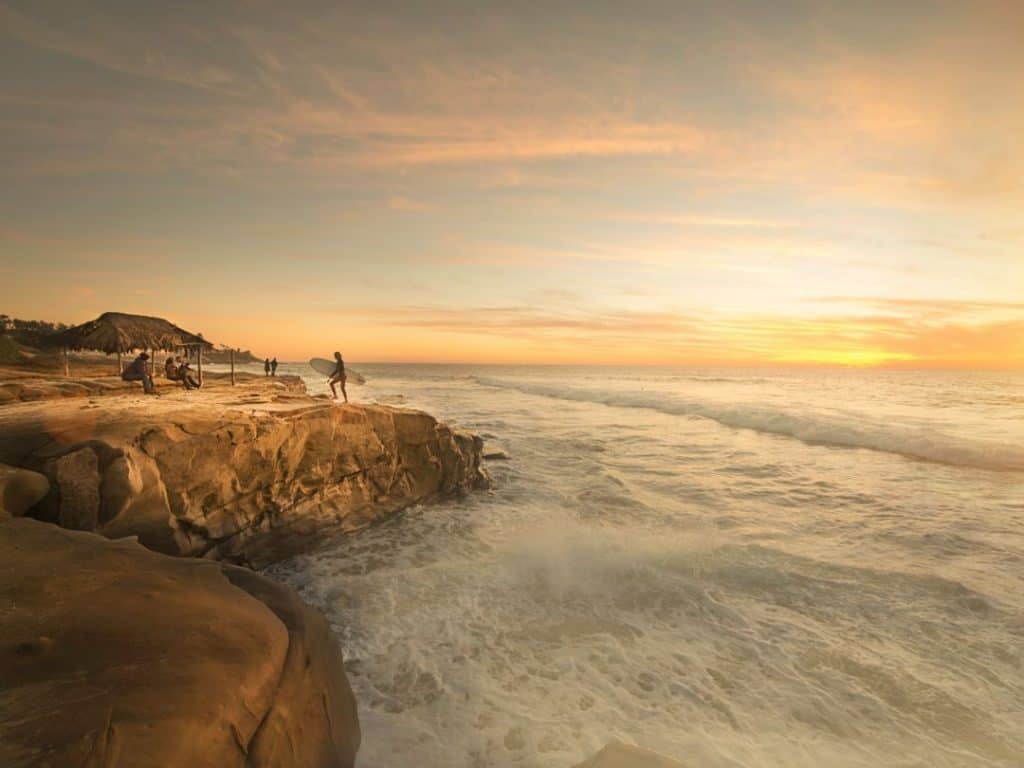 One of the best places to take in a stellar San Diego sunset is from Sunset Cliffs Natural Park.

Try and get here about an hour before sunset to find parking and a good spot to watch the stunning golden-hued coastal views with a bunch of locals.

If you arrive early enough, walk around the cliffs and watch the surfers below or adventurous cliff divers jumping from the rocks. 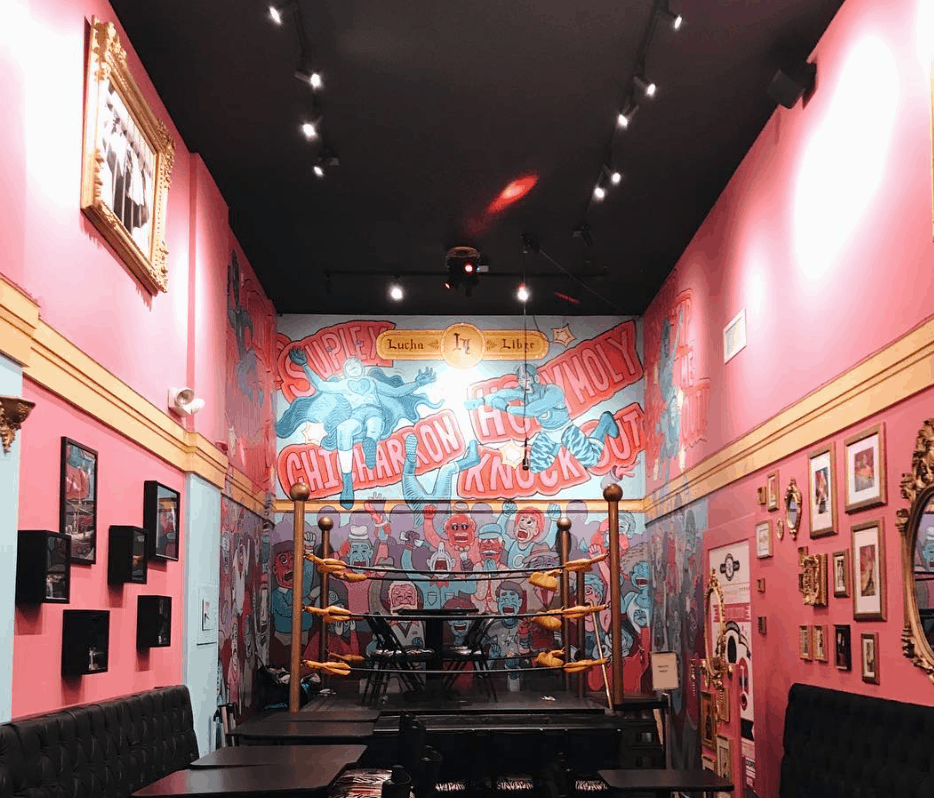 To finish off your last night in San Diego, head over to the more local nightlife neighborhood in the city – North Park.

Start with dinner at the novel Lucha Libre Taco Shop in the heart of North Park. This colorful restaurant is Mexican wrestler themed and its all kinds of quirky and delicious.

The surf and turf burrito or California burrito is the best options on the menu.

Night out in North Park 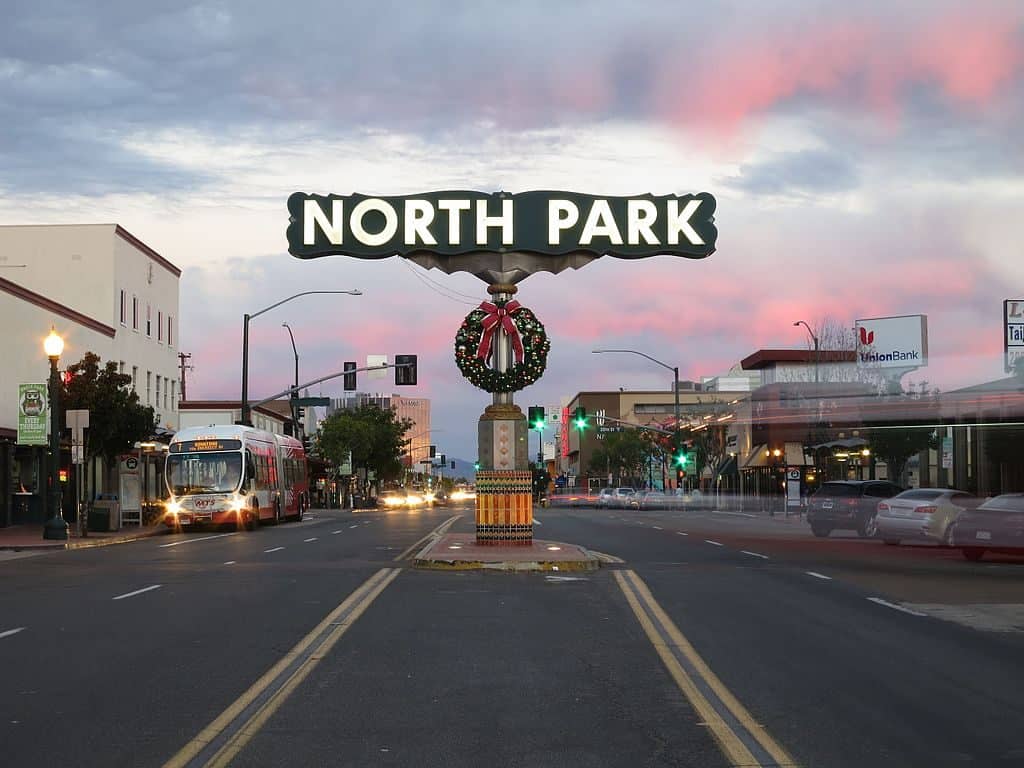 After another great Mexican meal in San Diego, it’s time to check out the best of North Park. If you’re into the bar scene, there are plenty of options to choose from around the neighborhood.

For a really good whisky bar, head to Seven Grand. For one of the best dive bars in San Diego, stop by Bar Pink. Or, for dancing, head to True North or The Office.

If you’re not interested in drinking, there are a lot of other fun things to do in North Park at night. Head to a live show the historic Observatory Theater (one of the best concert venues in San Diego), grab dessert at Caffe Calabria, or play video games at Coin-Op.

There are so many different ways you could spend a weekend in San Diego, but this itinerary is a good place to start if you want to see the most popular attractions in San Diego as well as the local hotspots.

No matter how you decide to spend your time in San Diego, it would be hard to have a bad time in the city.

From a world-renowned foodie scene to white beaches, good weather, and the many options that a big city offers, San Diego is the perfect spot to spend a sun-filled weekend in California. 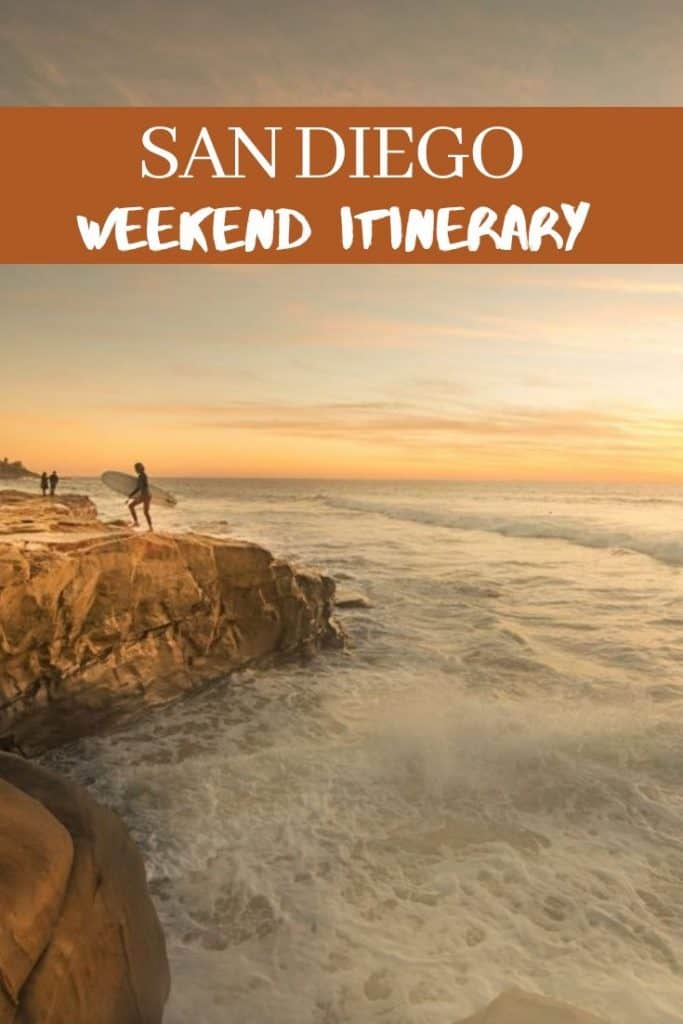 Guest Author: Mimi McFadden is a travel blogger, avid yogi, and paneer enthusiast. Originally from California, she has been slow traveling the world since 2013.

After living abroad for five years in Australia, New Zealand, Thailand, Greece, and Portugal she has finally found a home in San Francisco, California. You can find her on Instagram, Facebook, and her blog, The Atlas Heart. 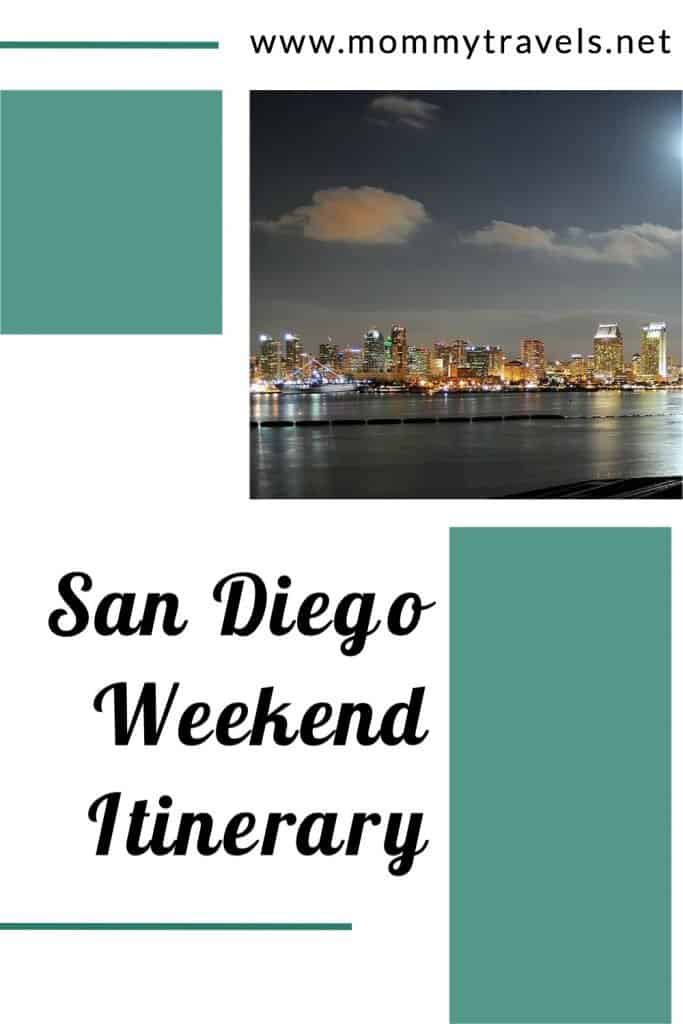