What Is the Best Way to Store Your Hunting Clothes?

What Is the Best Way to Store Your Hunting Clothes?

Hunting is a favorite activity of many people on a day off from work, whether they’re big game hunters or pheasant specialists, riflemen or archers. Every hunter knows that a hunt is incomplete without the proper gear – and that gear works best when properly maintained.

Naturally, maintaining your hunting gear in good condition during the hunting season is crucial, but how you keep it for the remainder of the year is equally important.

In most parts of the country, hunters put away their hunting gear until next year when hunting season ends. When the next hunting season rolls around, everything will be ready to go and in place if this hunting gear storage is done correctly. This guide will teach you all you need to know about storing hunting clothes during the off-season.

You’ll be sprayed with a scent eliminator during hunting before venturing into the woods, so that should be enough, right? It is a common misconception that dogs have more olfactory sensors than deer. Deer and other wild game can detect even the slightest foreign odor. Dogs have 220 million olfactory receptors, while deer have 297 million. Deer can smell danger using their noses, making them hard to catch.

A deer’s olfactory epithelium is around 14 square inches in size. White-tailed deer can detect and tell apart six unique odors at once. The olfactory cortex of a deer is substantially bigger than a person’s, allowing it to detect odors far better than humans can. It’s common for a game to flee far from the source of the offending scent when it detects it.

Simply putting your hunting gear in a closet between hunts, like any other garment, exposes them to a wide range of common household scents. There are a number of them that can ruin your next hunt quickly. Among these scents are:

You can prevent your hunting clothes from getting contaminated with scent if you know how to store hunting clothes properly. There is a lot of value in considering this strategy. Preventing foreign odors before a hunt will reduce the amount of scent you must contend with after the hunt. It’s important to eliminate odors from your hunting clothing, footwear, and gear because of these facts.

The Best Way to Take Care of Hunting Clothes 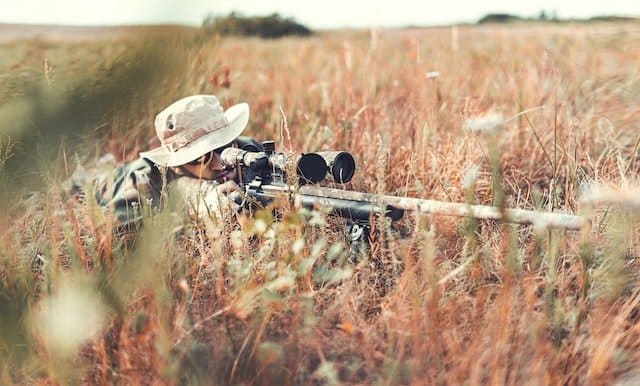 Scent management is essential for any hunter worth their weight in dried meat for most large game hunting, which means hunting gear cannot have any foreign smells. You’ll need to take extra precautions during storage to avoid this.

A scent-free wash is the easiest method to avoid picking up unwanted scents. If you don’t have the money for somewhat more expensive detergents, you could wash your hunting gear using baking soda. This will absorb all the scents you have collected over the season.

To prevent fading, always keep camo apparel inside out. To avoid mold formation, keep your hunting clothes in a dry indoor place. Also, keep hunting gear and clothing in the dark to prevent discoloration or warping from the light.

Make Sure You Store Your Hunting Clothes Correctly

It’s critical to avoid keeping your hunting gear with your other garments. This relates to the first point addressed at the outset: scent. Your other clothes have distinct odors that might rub off on your hunting gear, reducing their usefulness.

To avoid this, store your hunting gear in a plastic tote or a scent-free bag. Keep the plastic bags or totes where they are unlikely to be noticed or opened. Don’t you believe you don’t need a scent-free bag or tote since you keep your hunting gear and apparel in the corner of your garage or shed? Think again. These places have distinct odors that your freshly laundered garments might pick up.

You can go above and beyond by including pine needles, cedar chips, or a natural scent wafer in your clothing and boots to help them get the scent of the outdoors before the winter arrives.

Ready Your Hunting Clothes for the Next Season

As you pack up, you should plan for next year’s hunt. Sort and mark bags based on what time of year you need them, so you don’t have to dig for the correct clothing on your first few early-season hunting excursions.

With the bags correctly marked, you can pull them out, pack them in your truck, brew coffee, and get going. Pack your late-season jackets, base layers, and heavy-duty socks together so you can readily find your winter hunting gear when the time comes.

When you prepare your hunting apparel (and other gear) for off-season storage, identify what needs to be replaced because camo can fade, rip or have holes. Consider buying your replacement clothes and equipment during the first few months of the off-season because this is when hunting outfitters have the best bargains.

Proper storage and upkeep of all hunting gear during the off-season not only benefits you when it comes time to hunt again, but it may also extend the life of one’s equipment. The need to replace equipment due to damage caused by improperly storing them season after season may be an expensive blunder. Still, with a few more procedures and extra effort, the hunter can keep their hunting gear for several seasons.